American converts are taking a 2,500-year-old faith and making it over in their own image -- self-absorbed. 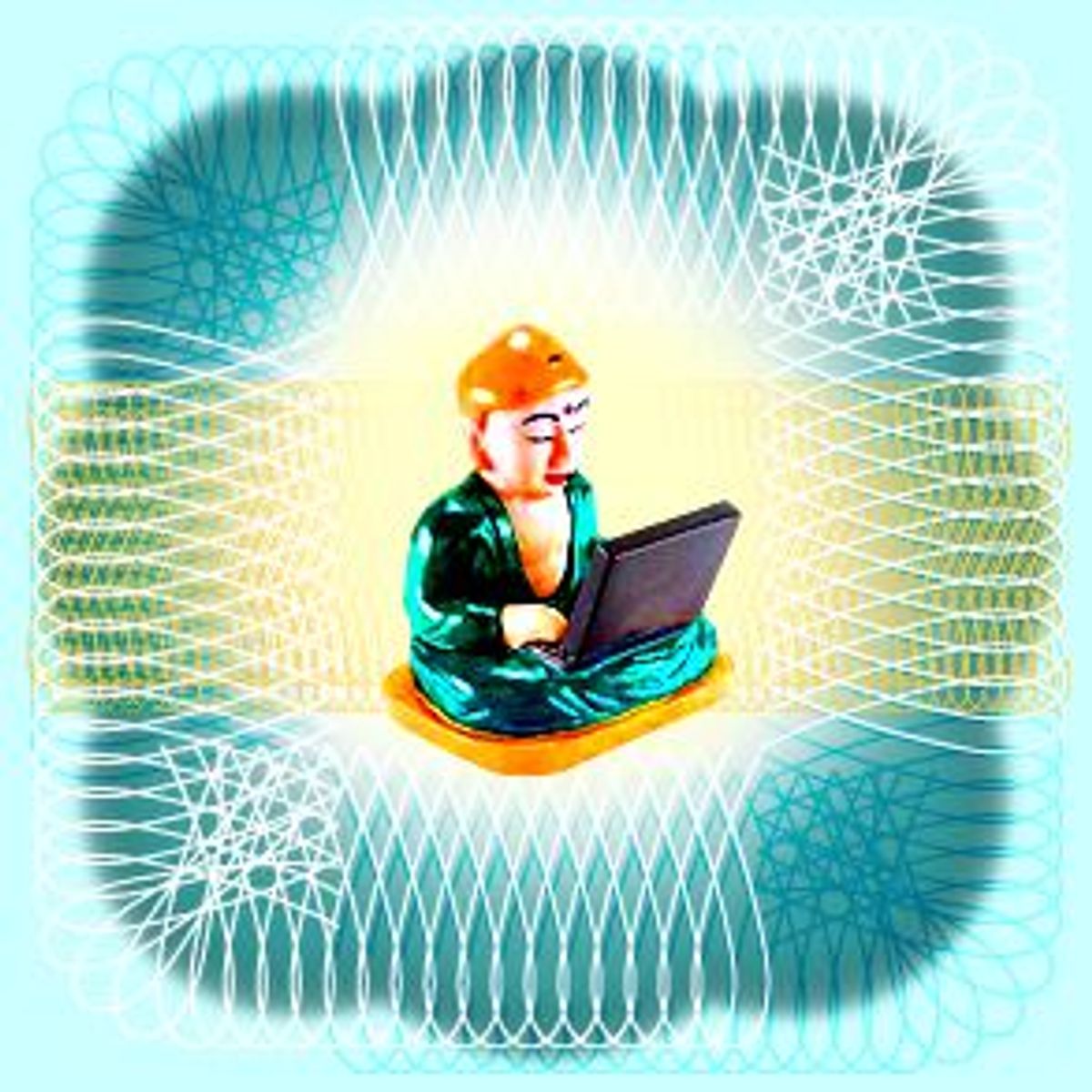 As anyone who hasn't spent the last few years meditating in a cave in Asia knows, American Buddhism is booming. The 1990s saw three Buddhist movies and a gaggle of celebrity Buddhist pitchmen, including Beastie Boy Adam Yauch and actor Richard Gere. The United States is now home to at least a million not-so-famous Buddhists as well, most of them new immigrants from Asia. But Buddhism is also popular among hip Americans who have never attended a Zen center or visualized a Tibetan mandala.

Typically these sympathizers get their Buddhism, as beat author Jack Kerouac did, from books. Buddhist bestsellers used to come along once a decade: Kerouac's "Dharma Bums" in the '50s, Philip Kapleau's "Three Pillars of Zen" in the '60s and Shunryu Suzuki's "Zen Mind, Beginner's Mind" in the '70s. Today they materialize monthly, along with more evanescent titles like "Zen and the Art of Screenwriting" (really). Demand for Buddhist books has turned many teachers into stand-alone brands with remarkable marketing muscle. The Dalai Lama and Thich Nhat Hanh are the Coke and Pepsi of this Buddhist generation, but homegrown brands such as Jack Kornfield and Lama Surya Das can also move 100,000 tomes without getting off their zafus.

James William Coleman is not a major brand, and his "The New Buddhism: The Western Transformation of an Ancient Tradition" is not destined for the bestseller list. It does shed light, however, on today's oddly bookish Buddhist vogue. Coleman is a sociologist and a Buddhist, so it's not surprising that he supports his sympathy for American Buddhism with a survey. His book focuses on a small minority of American-born converts and sympathizers rather than the immigrants and their children who make up three-quarters of American Buddhists.

These "new Buddhists," as he calls them, patronize four types of Buddhist groups: Zen centers, Tibetan Buddhist centers, vipassana ("insight meditation") centers and unaffiliated, nonsectarian centers. Most are baby boomers, almost all are white and all practice meditation, which sets them apart from the members of Sokka Gakkai International-USA (a group that prefers chanting to meditation), the largest Buddhist organization in the United States and the only Buddhist group that attracts significant numbers of blacks and Hispanics.

Coleman identifies some key tendencies among boomer Buddhists, including efforts to make Buddhism more egalitarian, more feminist and more socially conscious. The most audacious of these trends is a drift toward a secularized Buddhism that author Stephen Batchelor calls "Buddhism Without Beliefs" and Coleman dubs "bare-bones Buddhism."

This supposedly revolutionary concept is actually rather old, even hackneyed. The idea is this: Strip Buddhism of what Coleman describes as its "traditional religious trappings -- robed priests, elaborate rituals, sacred images of supermundane figures, devotional practices." What remains is a demythologized practice that is both new and (supposedly) improved: no chanting, no incense, no monks and certainly no bowing. This stealth approach leaves Buddhists with little to do except meditate and read books like "The New Buddhism."

Recently critics have suggested that the "new Buddhism" is subverting Buddhism itself. In Time magazine's 1997 cover story on "America's Fascination With Buddhism," Robert Thurman (friend of the Dalai Lama, father of Uma and Buddhist studies professor at Columbia -- in that order) derided Batchelor and his ilk as "non-Buddhists" preaching humanism but marketing it as Buddhism. In "Ignore the Man Behind the Curtain," Ngakpa Traktung Yeshe Dorje and A'dzom Rinpoche blasted Lama Surya Das as a faker in an American Buddhist Oz. "Mr. Surya Das is therefore a Buddhist with 'no Buddhist beliefs' in a world where there is 'really no Buddhism,'" they wrote. "This should perhaps cause anyone who would learn Buddhism from Mr. Surya Das to stop and ponder."

I am not a Buddhist myself, but I have taught American Buddhism for about a decade, and I must admit I share a certain disquiet about the direction boomer Buddhism is going. I teach religious studies because I believe that studying religion is a truly liberal art. All of the world's great religions provide profound challenges to the unexamined life. At their best, they offer devastating diagnoses of human sickness and radical remedies for it. They demand crazy things -- that we love our enemies, that we deny our selves or that we vow to liberate all sentient beings. At their best, religions are difficult, confusing and mysterious. They don't pat us on the back, assuring us that, in the words of a Buddhist bestseller by Sylvia Boorstein, "It's Easier Than You Think." In fact, they remind us that it's harder than we think, much harder. Like a Zen master stalking his students with a stick, they whack us back to attention when we fall asleep.

Boomer Buddhism, by contrast, is all too often shallow and small. It soothes rather than upsets, smoothing out the palpable friction between Buddhist practice and the banalities of contemporary American life, cajoling even the Dalai Lama to direct his great mind to small American preoccupations like "The Art of Happiness."

Almost four centuries ago, the Puritans came to New England intent on uplifting and improving Protestantism. By stripping Protestantism of all the last vestiges of Catholic superstition, by relying on the authority of the biblical book alone, they would craft a new and improved Christianity. Boomer Buddhists are modern-day Puritans. They too are suspicious of priests and rituals and other "traditional religious trappings." They too believe that America is a sacred place destined to perfect the religious tradition they hold dear. Virtually every "new Buddhist," including Coleman himself, seems to be carrying around a laundry list of the ways America is making Buddhism better. To take just one example, Lama Surya Das -- who, despite the name, is a white guy -- has a list of "Ten Emerging Trends" in American Buddhism. In the United States, he brags, Buddhism is "nonsectarian," "psychologically astute" and "simplified." Each of these trends is, in his view, an improvement.

What seems to be lost on the new Buddhists who populate Coleman's book is the possibility that it may be America's destiny not to make Buddhism perfect but to make it banal. It is, of course, far too early to determine what America's effects on Buddhism will be. The religion has been in Asia for two-and-a-half millenniums; it has been a force in the United States for only a century or so. So far, however, things do not look good. Philosopher George Santayana once observed that "American life is a powerful solvent. It seems to neutralize every intellectual element, however tough and alien it may be, and to fuse it in the native goodwill, complacency, thoughtlessness and optimism." Instead of preserving Buddhism, Americans seem intent on co-opting and commercializing it, dissolving a religion deeply suspicious of the self into an engine of self-absorption.

A few months ago I visited the headquarters of the Buddhist Churches of America in San Francisco. In its gift shop (yes, almost all American Buddhist centers have gift shops) sat a rock carved with the words "What Would Buddha Do?" If the Buddha were alive today, would he be a "new Buddhist"? Would he write bestsellers for Doubleday? Direct films?

Call me old-fashioned, but I think the Buddha would march his ass (mindfully of course) to an American Buddhist monastery. Like immigrants and chanters, monks are almost entirely ignored in Coleman's book, but they are now dug in all across America, doing decidedly old Buddhist things like wearing robes, conducting rituals and even chanting. At places from the Dharma Realm Buddhist Association and Shasta Abbey in California to Zen Mountain Monastery and Dai Bosatsu Monastery in New York, ordained monks devote themselves full time not to improving Buddhism but to preserving it. Some of these monasteries focus on translating and publishing ancient Buddhist texts. Most host laypeople for intensive retreats. But many also shutter their doors for long periods to allow monks to pursue the hard work of what the Buddha described as waking up from a long, bad dream.

Many of the monks at these monasteries are foreign born, but a surprising number are people born in America who have, for one reason or another, decided to scuttle the easy answers of boomer Buddhism for something closer to the real thing. Thanissaro Bhikkhu began life as Geoffrey DeGraff. After graduating from Oberlin, he went to Thailand, where he studied in the Thai forest tradition under a Thai teacher for more than a decade. In 1991, he joined with another Thai teacher to found Metta Forest Monastery in the mountains north of San Diego. Thanissaro, who became abbot of that monastery in 1993, describes the "new Buddhism" as a grand game of telephone in which "things get passed on from person to person, from one generation of teachers to the next, until the message gets garbled beyond recognition." One of the key Buddhist ideas lost in that grand game of telephone is sacrifice ("renunciation" in sutra-speak), which he calls the "huge blind spot in American Buddhism."

Thanks to Thanissaro Bhikkhu and hundreds of monks like him, an authentically Buddhist form of American monasticism is alive and well. These monks are not above adapting Buddhism to American circumstances. They struggle with questions like whether to wear winter coats instead of cotton robes in Chicago, and whether to drive cars in Los Angeles. But they adopt American ways grudgingly rather than gleefully. Unfortunately, as "The New Buddhism" indicates, boomer Buddhists now have the stage. Lama Surya Das sells his books by the gross. Thanissaro Bhikkhu sells his by the unit. Only he doesn't actually sell them. They are available for free on the Web -- a gift from the old Buddhism to the new.