The loo and love

Taking a dump near my boyfriend is just not something I can do. 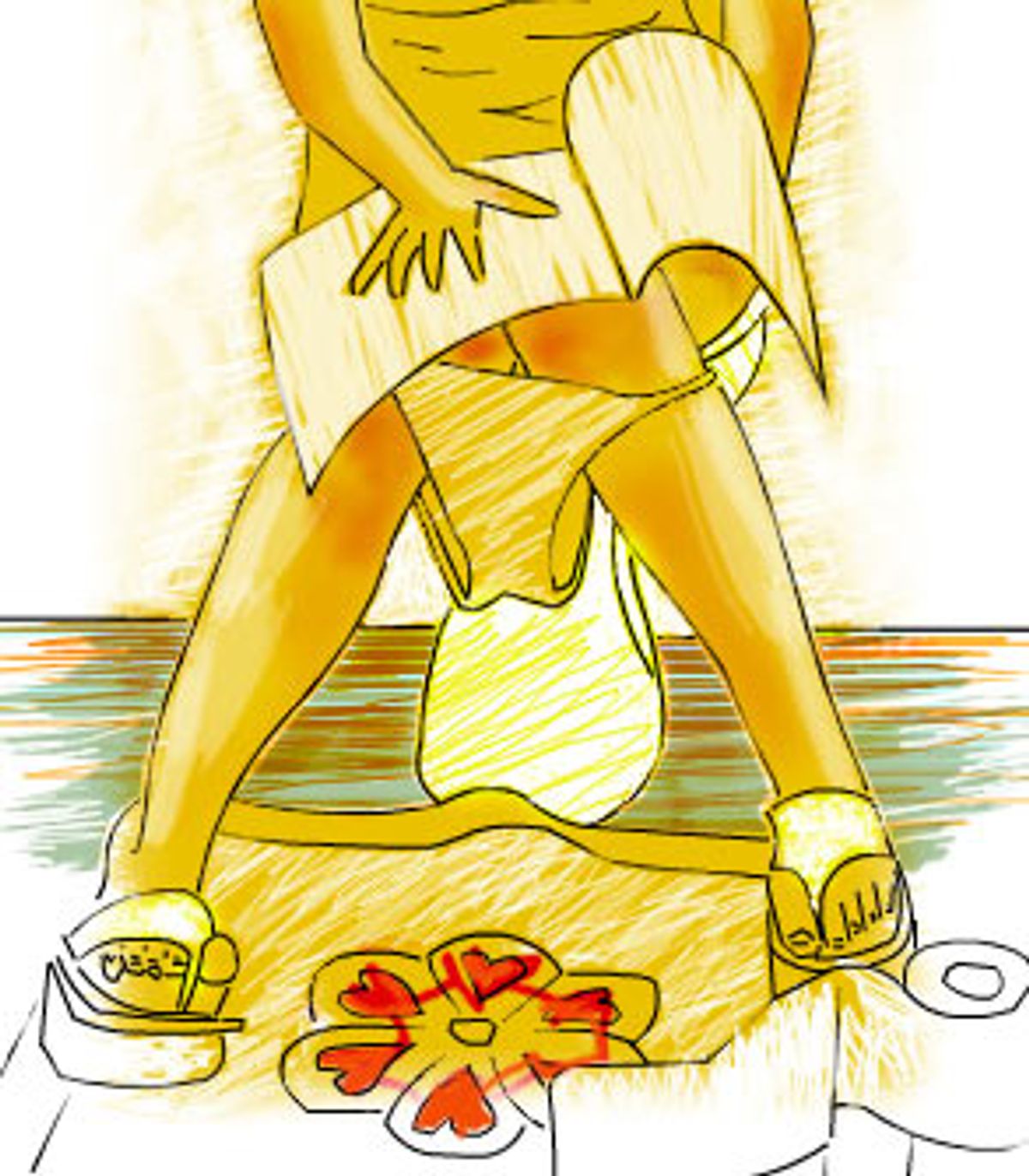 I'm lying next to my lover in bed, making sure he's fast asleep, and I'm planning a secret mission. It's not to leave him in the middle of the night, or sneak into the kitchen to gobble leftover food. I'm planning when I can use the bathroom so he can't hear me.

Men have no problem grabbing a magazine, strolling nonchalantly into the bathroom and spending a good 20 minutes in there. When they finally emerge they grin, bursting with pride at their accomplishment, and will occasionally comment about their dump. Women, on the other hand, will never do this.

For years I thought I must be the only person who couldn't take a crap near their boyfriend. But when I finally confessed my bathroom anxiety to my girlfriends, I received a lot of support. There would be a moment of stunned silence, then a slow-spreading grin and a look of relief (it's like bonding with women you just met over period stories). I've had endless conversations with my girlfriends about this, and the lengths we go to avoid it -- like running the water, fleeing in the morning to go "buy bagels" and carrying a mental map of every Barnes and Noble within a 30-block radius.

We know it's silly and irrational -- we're all human, we all shit. We don't care about peeing near our boyfriends, so what's the problem? Somehow we physically can't take a dump near them. Maybe it's "performance anxiety" or a need to maintain an aura of odor-free mystery. It could be a weird Freudian psychosexual thing, that we would rather keep our association with our genitals strictly sexual. But whatever it is, it's a problem -- especially if you're living in a 300-square-foot Manhattan studio (like mine) where the bathroom is uncomfortably close to the bed.

Avoiding the bathroom is easy if you're dating someone in the same city and you don't live with him. You can return to your apartment in the morning or wait until you go to work. Somehow it's less embarrassing to have your colleagues overhear your bathroom activities than your loved one (although my office bathroom, which looks like it was ripped off from the county state fair, is directly off the kitchen, a situation that has its own unique set of problems).

Vicki, 35, remembers the first time she slept with her then-boyfriend, David. She woke up in the morning and felt her stomach rumbling. She told him she was leaving to go "buy bagels." Instead, she ran down the street to her friend Stacy's apartment and started banging on the door. "Open up, I have to use the bathroom," she said. "Why? What's wrong with yours?" asked a puzzled Stacy. "Yeah, but I just slept with David for the first time and didn't want to take a dump at his apartment."

The ultimate in bathroom anxiety is the weekend getaway, because you're stuck with your beau 24/7 and there's no escape. Britney, 25, avoided taking a weekend trip with her boyfriend for the first year because of her bathroom issues. Then one time, it was unavoidable. "I just couldn't go to the bathroom," she says. "I would wait until the middle of the night when he was asleep, and sneak into the bathroom, but I still couldn't go. I was afraid of everyone hearing me. By Sunday night my stomach was huge."

Phoebe, a 36-year-old New Yorker, just started dating a man in San Francisco. The first few times she visited him, she couldn't use the bathroom. "The whole time I was there I didn't shit," she says. "I don't know why. I thought to myself, is it because it's not sexy to shit? It kind of defeats the whole purpose of looking sexy if you have a huge bloated stomach. It also makes you irritable, which takes away from the whole experience. But as soon as I get home it's like, bang, I go."

She also points out that when she was married, she had no problem taking a dump near her husband. "It was definitely a sign of how much I loved him," she says. "I never cared if the door was open or not."

I have to disagree with Phoebe. If I'm in love, I can't go to the bathroom near him. (The one man I had no problem taking a dump around was someone I was never in love with.) My last relationship was long-distance, which made the bathroom easier to avoid. In the entire year that we dated, I think I only used the bathroom once when he was in the vicinity, and that was after way too much coffee. For the record, I never heard him go to the bathroom either.

When he invited me to Paris, I was a little worried -- what was I going to do without a network of Barnes & Nobles? The trip ended up being relatively trauma-free because the French have the good sense to keep the toilet separate from the bathroom (double doors definitely help muffle incriminating sounds) and the doors on bathroom stalls actually reach the floor.

Weirdly enough, although I could talk to my beau about my bathroom issues -- we used to laugh uproariously about it -- it never made it any easier. Just to torture me, he used to barge into the bathroom and jump on my lap when I was on the toilet. (This was not part of a fetish that some people have about "water sports" or "golden showers.") And it has nothing to do with why we broke up.

Of course, there are some women who have no problem using the bathroom around their boyfriends. When I asked my friend Miranda, 25, about it, she thought I was nuts and became exasperated by my questions. "Look, everybody dukes and if I have to duke I just say, 'I gotta duke,'" she says, as if it's the simplest thing in the world. "Guys are always talking about their crap, how they just took the best crap, and I kind of like that. Plus, I wouldn't want to miss the window of opportunity."

Louisa, 30, also thought it was a strange question. "It can be embarrassing, but so what? You get over that. What else are you going to do?" The one time she would get annoyed is when she was headed to the bathroom and her boyfriend would say, "Are you gonna go drop a spike?"

Speaking of the male animal, almost all of my guy friends stared at me in utter bewilderment when I brought it up. Only one of my men friends would admit to having second thoughts in the bathroom. Bill, 29, says he never uses the bathroom without the sink running -- "and I'm a conservationist, but ultimately my bathroom anxiety wins out." Bill tells me that "the well-timed flush for noise control is key," and that he will even bring a Walkman into the bathroom so he can "concentrate."

According to the "experts," all of this is normal -- at least when it comes to peeing. There is a medical term for people who can't urinate in public, called shy bladder or "paruresis" and a host of support groups, but nothing having to do with pooping. I called Jerilyn Ross, the president of the Anxiety Disorders Association of America, to discuss.

"I've only heard about this from one patient, and she was the most psychotic person I've ever met," she says. Still, she acknowledged that it could be a real problem, but not one that is necessary to "get over." "It's just a cultural, upbringing thing," she says. "It's one of those things that's not considered polite." She told me that in Japan, some toilets have a button that will give a louder flush to cover up noises, if needed. Her advice to the bathroom-shy is to tell your beau to simply leave the room, or when traveling, to use the bathroom in the hotel lobby.

Sandor Gardos, a sex therapist, was stunned into silence when I asked him about this. "Wow. I wasn't aware this was a phenomenon," he says. "I just thought when a person said she was going to get the bagels, she really meant it."

Gardos says the origin of this is the unrealistic expectations and fantasies people develop about relationships -- and a lack of a good shitting role model. "I can't recall Julia Roberts ever taking a dump in her movies," he says. After thinking about it some more, Gardos pointed out, "Look, you can't deny that you don't take a dump. That would be weird. Is a distended stomach more attractive than taking a dump? You have to ask yourself, What is the fear? What will happen if my partner hears me going to the bathroom?" Gardos suggests lighting a candle, turning on the water or singing a tune.

Sex therapist Deb Levine was a little more sympathetic to this problem, and said it was more common in the beginning of a relationship. "I have a friend whose husband proposed to her the first time she farted in bed, because he thought, 'Yeah! Here's a real woman.'" Her explanation for the anxiety is this: "It's about maintaining space. You don't want your boyfriend to see you in a way that's associated with uncleanness or smelliness." Her advice to women on dates is to use the bathroom in the restaurant, and "just remember that everyone has a digestive system. Everyone has to go to the bathroom." She also suggests carrying a matchbook with you, or cracking a joke about it (like my friend Natalie, who uses the code term "growl" with her boyfriend, as in "Excuse me, I gotta go growl.")

While the medical profession hasn't recognized this as a problem, pop culture has. One "Sex and the City" episode deals with Carrie taking a shit at Mr. Big's place for the first time and then talking to her friends about it over cocktails; there's the infamous bathroom scene from "Dumb and Dumber" where Jeff Daniels' character uses his date's bathroom before they head out to dinner and clogs it up; and many of us could relate to Finch from "American Pie," who can only go the bathroom at his house and would leave school in the middle of the day to go home as needed. His friends knew about this, so one day they slipped him a laxative so he would be forced to use the school's bathroom.

This problem has apparently escaped Ian Schrager, however. His latest hotel, the Philippe Starck-designed Sanderson in London, doesn't have walls in the hotel suites, only sheer, gauzy panels -- including around the bathroom. This, to me, is the ultimate nightmare. Juliet, the hotel's receptionist, confirmed that yes, all of the suites use sheer panels, and says she has never received any complaints (maybe this is just an American obsession.) "The bathroom is discreet, and it has a very sensual look with all the netting," she says, laughing. "You can vaguely see through it but not totally."