Is skim.com dressing up the antisocial pervert or outfitting the terminally hip? 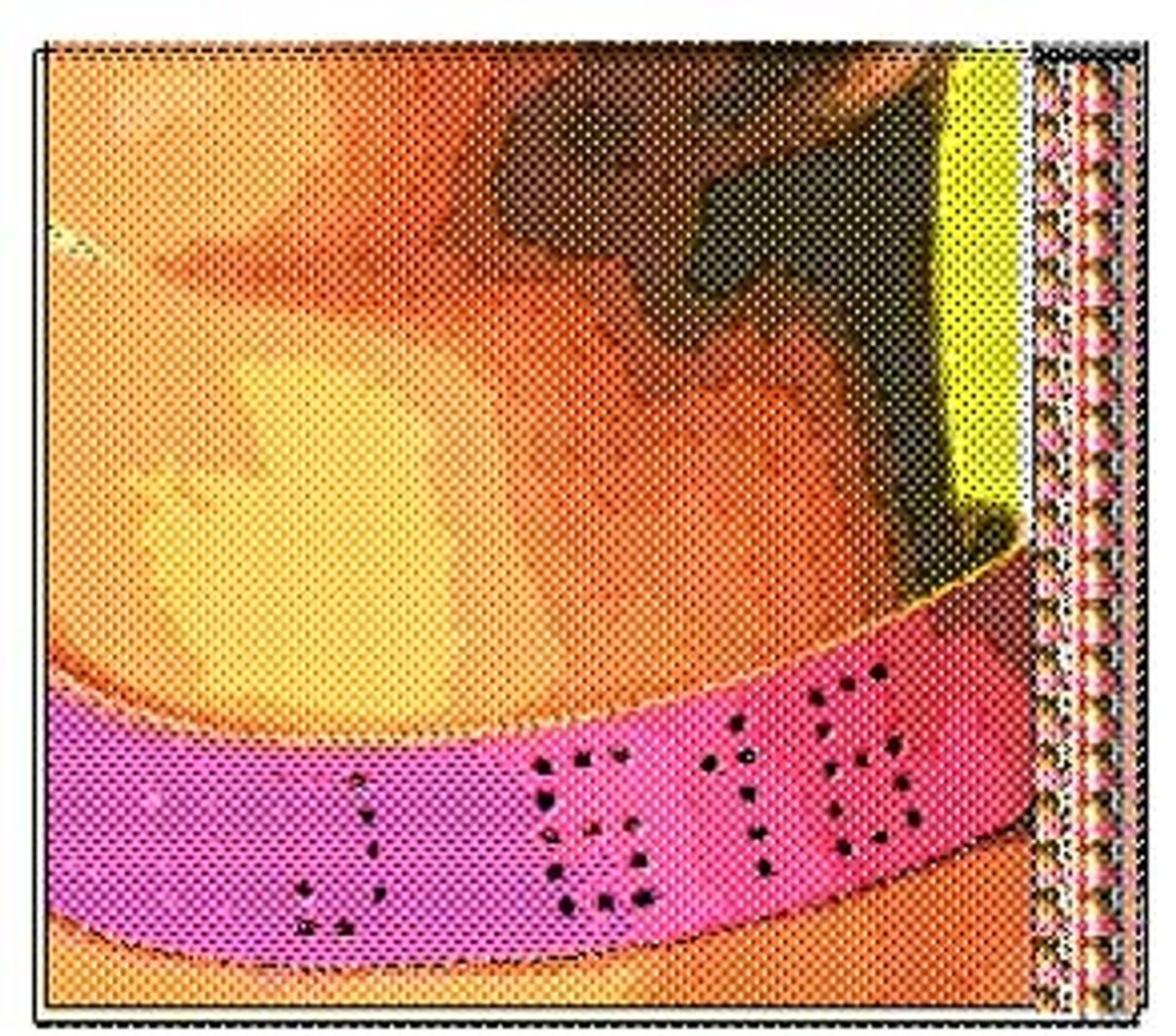 The collar is pink leather, and it closes in around the neck with a little brass snap. Discreetly embossed on the side of the collar is the URL "skim.com," and front and center, in punched-out numerals an inch high, is a personal I.D. number: S00 616. It is sassy and ironic, and it hints of S/M bondage (with perhaps an unsavory splash of the Third Reich), but with a modern, girly frivolity. It makes your neck look long.

You wear the collar out at night, perhaps to a bar full of people with whom you might have something in common -- if only you had an excuse to meet. You are sitting there, sipping your cocktail, when across the room you spy him: interesting face, engrossed in conversation, funky clothes. Normally, you'd try to screw up the guts to go meet him, but you've been released from that loathsome task: You've noticed the sweater he's wearing. It's a simple, brown, zip-front knit top with a high ribbed neck. On his sleeve is a discreet label with the secret message: skim.com, S00 258.

So instead of trying to make conversation, you dodge the rejection bullet and leave the bar. When you get home -- fully free of the humiliating fallout of face-to-face communication -- you get online (wearing your stained pajamas with the hole in the crotch, perhaps) and visit the skim.com Web site. You plug his number into an e-mail form and write: "I saw you at the bar tonight. I was the girl in the pink collar. Can I talk you into coffee?"

If fashion is communication, a codified sort of symbolic expression incorporating a certain amount of ancient ritual, then the Swiss designers at skim.com have distilled it into its purest form. The same old mating game -- I want you, you want me: What's your number? -- has been made so simple, so safe, so Orwellian, that now you don't even need to ask. Instead, the number is right there, front and center on your sleeve -- and only recognizable and of use to those who are plugged in enough to recognize it (and desperate enough, perhaps, to wear one themselves).

Skim.com markets personalized I.D.-tagged clothing: jackets and shirts and bags and skirts, each one individually marked with a unique number and the skim.com URL. Each I.D. number, in turn, correlates to a skim.com e-mail address. If someone sends a note to your I.D. number, it will be forwarded to your skim.com e-mail address. Your clothes are, essentially, telling everyone how to get in touch with you without revealing exactly who you are. As skim.com co-founder Johne Eisenhut describes the concept behind the clothing: "The brands and individualized products you choose communicate something about you, your style and aesthetics, to the outside world. We wanted to find a way to make that communication two-way."

The company, which launched last winter, has already produced three collections of utilitarian street fashion. The look is a cross between skater wear, Prada Sport and retro chic, bearing probably the closest resemblance to Mandarina Duck or Levi's Engineered Red or Diesel. Think puffy jackets, skirts that unzip and convert from a long cargo skirt to a mini, trim baseball tees and hooded sweatshirts in graceful cuts and smart fabrics: all street functional, but with high-fashion styling. The company is based in Switzerland, and was conceived by the founders of Freitag, who made a small ruckus in the 1990s with their one-of-a-kind rubberized bike messenger bags.

Skim.com's clothing is marketed for what the company's founders call the "urban citizens" of the world, successful young creative types -- artists, graphic designers, Web producers, writers, filmmakers, etc. -- with a bit of money to burn and appreciation of Gucci but an eye on the gutter. (A quick peek at the staff of skim.com reveals a parade of impossibly attractive, confident-looking hipsters who seem to have stepped straight off the jet from their latest jaunt to a hot new club in Reykjavik, Iceland.) The idea is, apparently, that there's an elite insider circle of fashionistas who share similar high/low aesthetics -- an international demographic that might wear a $400 pair of Helmut Lang pants with a vintage T-shirt that they picked up at a thrift store and the latest Adidas trainers.

The I.D. numbers serve as both an indicator of cool ("You wear skim.com? I wear skim.com!") and an easy way out for the communications-lazy. At least, that is what one is to understand about the line if one doesn't go very far in interpreting the strangely euphemistic explanations of its makers.

But it seems somewhat obvious that the main reason anyone would wear skim.com clothes (besides the certain appeal of its minimalist styling) is because he or she wants to get laid without enduring the messiness of false starts and awkward in-person preambles. It would appear to be a matter of cutting to the chase without the chase, a smooth digital dash to the finish line in which everyone is a winner (assuming that losers would never wear anything as cool as skim.com).

Fashion has always been based on the belief that you are what you wear -- that aesthetics reveals lifestyle. And singles are always on the prowl for potential partners who apparently share their tastes. Clothing that's emblazoned with an I.D. number simply makes that purpose more blatant and constructive: Here's somebody who can't resist a sleek mock turtleneck and he's branded for love!

Once upon a time, you had to take a risk to meet someone, put yourself on the line by walking up to a stranger and striking up a conversation. Skim.com, however, reduces the moment of reaching out to a flurry of keystrokes performed alone -- a sanitized, safe kind of connection of bits and bytes instead of voice and touch.

Skim.com is a modern version of Missed Connections, that poignant listing of elusive lost loves crying out from the back of weekly newspapers. ("Redheaded girl, I saw you on the 5 Fulton bus. Call me.") But it goes that one better by injecting the ease and absolute privacy of anonymous chat room assignations. There's no need to look anyone in the eyes, no need to say "I like you as a friend" to someone's deflating visage. Clearly this is a godsend for the pathologically shy single unwilling to pop Zoloft for a trip to the meet market, but isn't it culturally tragic, even unhealthy, to kill the adrenaline rush of uttering that opening line? Is it advisable for us as humans to quash the corrective humility of an occasional brushoff?

Skim.com is, in the most charitable view, fundamentally Utopian. The company appears to believe in the natural affinity between humans, that everyone is fundamentally nice and would say nice things to each other if they could avoid the intolerable strain of face-to-face communication. But the Orwellian aspects of its product tend to scare me to death. Are clothes with I.D. tags all that different, say, from a jailhouse jumpsuit, a workplace tracking device or even a concentration camp tattoo? (In fact, in the first collection, skim.com played with just this idea by producing a sweat shirt that splashed your I.D. in large numbers across your chest. "It had L.A. County Jail flair," laughs Eisenhut.)

It is just a quick hop, skip and jump from uniquely numbered tank tops to tracking devices and Big Brother. What if the police discreetly used the skim.com numbers to follow you and report on your activities? What if someone else did? Even in the most benign scenario, it feels like the stuff of some National Geographic special on the mating habits of endangered species: "We tagged the black rhino to make sure it wasn't drinking alone and eating TV dinners. Next week, we shadow single urban sophisticates as they hunt members of the opposite sex!"

In an I.D.-tagged world, there may be anonymity but there is no incognito. And in this overconnected digital age, you certainly cannot hide. In Europe, where the company has sold most of its clothes so far -- roughly 25,000 pieces of clothing, says Eisenhut -- skim.com works with SMS (the cellphone instant-messaging service) so that skim.com members can send one another notes from their cellphones without having to log on to e-mail. So while the person on the other side of the room who grabbed your skim.com number and is now suddenly sending instant messages to your cellphone via his cellphone may not know your name, he can certainly harass you. In fact, these clothes are the stalker's dream tool: freak-friendly couture, with no dry cleaning necessary.

Of course, the founders of skim.com say that their intention for the clothes is a bit more high-minded than this. (Then again, if they came right out and said that the clothes facilitated the public marking of a lonely-hearts club of stylish communication misfits, who would buy them?) In fact, they believe the clothes are used less by languishing singles than by creative types who want to build social and professional networks with like-minded folks.

As Eisenhut puts it, "When you go around in urban life, go out to bars, it always has to do with being seen. We live in a see-and-be-seen culture. That used to be a pejorative and people laughed at it, but I actually think that see-and-be-seen culture is very important in developing personal networks and peer groups in which you move and socialize, and that supports you in your daily struggle."

Even if the real-world implications of the skim.com clothes are a bit alarming, the founders' idealistic vision is certainly pretty: How can you reject outright the idea of making it easier for like-minded (or, at least, like-dressed) people to find each other? Eisenhut likes to think of the clothing in terms of poetry. "It's like 'A Une Passante,' a poem by Baudelaire," he explains, describing the poet's longing for a girl he spies disappearing into the busy streets in Paris. "It's a melancholic fantasy that anyone who walks by you in this anonymous crowd could change your life and you will never know them. Skim.com is the remedy for that."

Talking would be cheaper, presumably, but for mute fashion mavens and those who will pay anything to avoid uncomfortable or unnecessary human contact, this is a cause for poetic celebration. The question, however, remains: Could it be that in this case of supply and demand, the remedy is dressing up the illness instead of providing the cure?