Biting into one is all about love and loss and family and ... Oh, who are we kidding: They just taste so good! 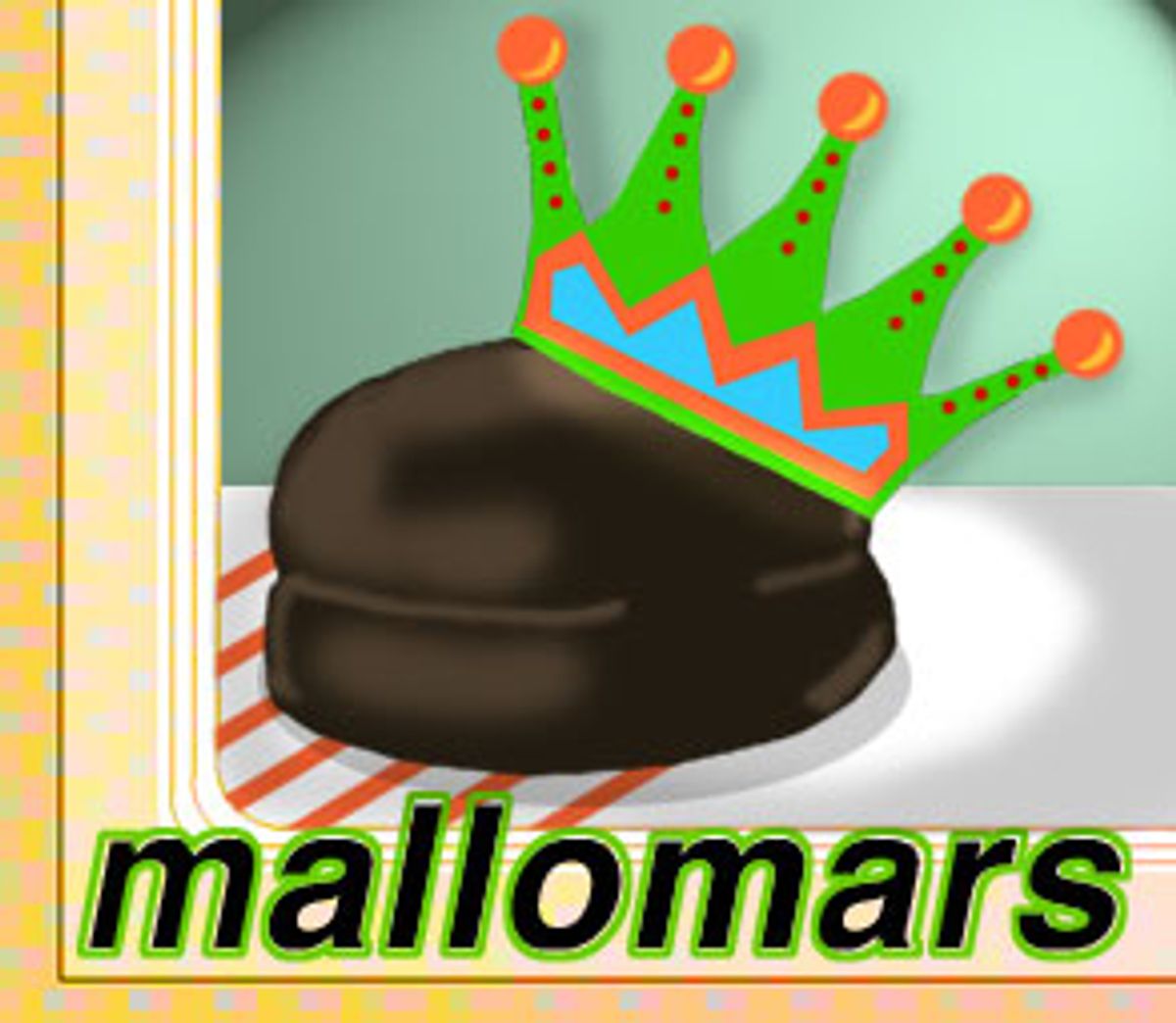 I found Mallomars here the other day.

I was in the E-Z Stop Market, which looks exactly like it sounds. It's across Shattuck Avenue from the two biggest movie theaters in town, and the wife and I had stopped in, as we often do, to load up on movie snacks. She was digging around the candy shelves when a flash of yellow caught my eye. The yellow of a cellophane Mallomars wrapper. The yellow of the greatest cookie in the history of the world.

Say it with me: Mallomars. They sound exactly like they taste. Sweet, soft in the middle Mallomars, rolling on the Mallomars tongue Mallomars. All rounded corners and smooth glass brown chocolate Mallomars. Yes I said yes I will Yes Mallomars. Mmmm. Allomars.

I hadn't seen them since I was a little kid. I thought they'd stopped making them. I became an atheist.

They were my grandfather's favorite cookies. We called him Papa, so Mallomars were Papa cookies. (Vienna Fingers, their grandmotherly counterpart, were Mama cookies.) I remember three things about my father's father: He let my brother and me blow out the match after he lit his pipe; he loved Mallomars; and, because he was kind of gruff and grumpy toward the end, and I only knew him toward the end, he scared the hell out of me. He died when I was 4.

Not much to go on. Mallomars -- Papa cookies -- were pretty much the only connection I had to my grandpa. Here's where I should tell you that that's why I loved them. But that would be a lie. I loved them because they were insanely fabulous cookies.

They're s'mores, is all they are. A little circle of graham cracker with marshmallow on it, surrounded, smothered -- no, embraced -- by a slightly brittle shell of dark, luscious chocolate. Enrobed. That's the word. The chocolate is poured over the cookie, you see. The cookie isn't dipped into the chocolate like some common thing. Therefore, says Nabisco, "Mallomars are an enrobed product." They're just s'mores, like you make at cookouts. And a Rembrandt's just a painting, like you make in kindergarten.

There are many ways to eat a Mallomar, but only three are officially sanctioned for international competition: biting off the marshmallow part and saving the graham cracker for last (superior method); biting off the graham cracker and saving the marshmallow part for last (dorsal method); and biting into the cookie like regular food (lateral, or "standard," method). I am something of a Mallomar dullard. I use the standard method. But I should add that I employ wilder scenarios for both Oreos and Vienna Fingers (breaking them open, eating the half with no delicious cream, then either scraping off the delicious cream with my front teeth or, if rushed, simply eating the other half), so you can still invite me to your party without fear that I'll kill the fun.

Here's what I didn't know about Mallomars: They're a New York thing. Seventy percent of all Mallomars sold are sold in metropolitan New York. And they're seasonal, available only from October to mid-March, because they are such delicate flowers they would melt in the harsh spring and summer months. News of the wonders of refrigeration and climate control has apparently not reached Nabisco's New Jersey headquarters.

Scooter Pies were variations on the s'more theme as well. Scooter Pies were made by Burry's. They were not New York cookies. They were West Coast cookies, flyover state cookies, goy cookies. There was a goofy-looking giant kid on the box, and sometimes they threw in these dorky puppets that weren't really puppets, they were just thin plastic gloves with characters drawn on them. Scooter Pies were bigger, more like a palm-size hockey puck than the silver-dollar-size brown derby that is a Mallomar. They came individually wrapped, 12 to a box, as I recall it. They were perennial. Hot summer day? Let 'em melt. I loved Scooter Pies.

We had a few minutes before the movie, so I took my box of Mallomars -- the first box of Mallomars I ever bought with my own money -- back to the car for safekeeping. On the way I slit open the yellow cellophane to get at the white box and then to the brown drops of wonder inside. The packaging is the same as when I was little. Maybe it hasn't changed since Mallomars debuted in West Hoboken, N.J., in 1913. In this age of shrink-wrap and molded plastic, is any other cookie still presented so elegantly?

I took one out. As soon as I touched it it started to melt. I remember that, the slidy feeling on your fingers if you don't pop it into your mouth right away. But how can you just pop it into your mouth? Not whole. You have to savor it. A Mallomar, so small, is still a two-, even a three-bite cookie. The cookie looked a little smaller than I remembered, as all things from childhood do. I hesitated, worried that it would disappoint, that I hadn't remembered it right, or that, as with so many other things, including me, Mallomars had gone downhill over the years. I looked at the smooth, almost shiny top. I explained to the wife about Papa cookies. Somewhere, a dog barked. I took a bite.

Exactly as I'd remembered it. The perfect combination of crunchy graham cracker, poofy marshmallow, enrobing, enveloping chocolate. Sabbath dinner at Mama and Papa's, and then it was just Mama's. The holiday feeling on those rare days when Mom brought home Mallomars from the store instead of regular old Oreos or Fig Newtons. The rich, optimistic sight of a full box. The tragedy of near emptiness, the last Mallomar. Will we ever meet again? Sleeping over. Papa in his bathrobe. It's too bad you guys didn't know him before he got sick, Dad says. Sitting on his lap in the yellow chair. Blowing out his match. Scared to death.

It's not much of a connection to my grandfather. It doesn't need to be. It's just a cookie. And a Rembrandt is just a painting.