They couldn't stand living under the gaze of 32 webcams, so I thought I'd give it a shot. 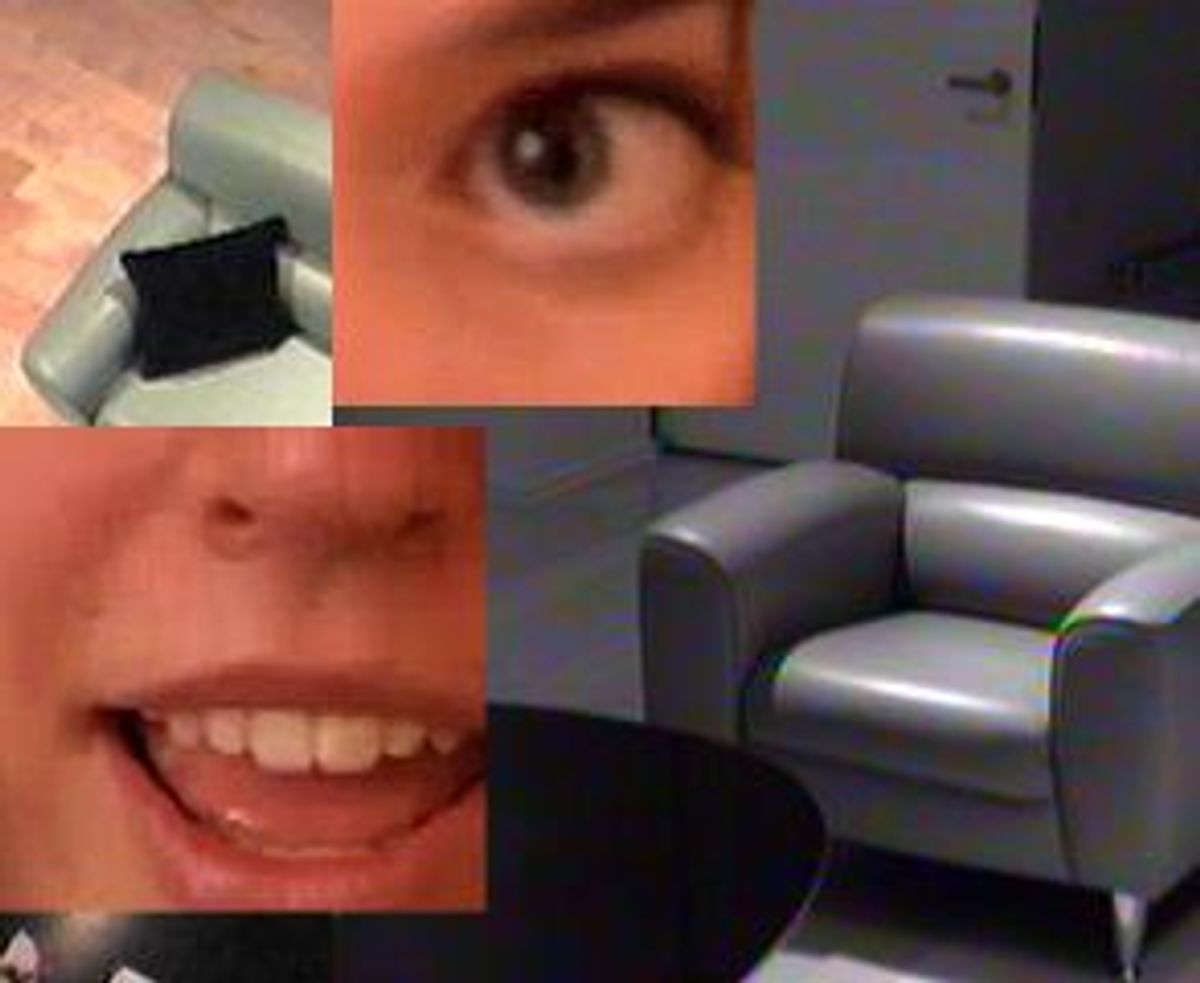 I'm a broke, unemployed and currently homeless dot-com casualty. I'd been drifting around New York for a couple of months, trying to find work (which would, in theory, lead to an apartment, then to women, success and, eventually, fame, money and literary stardom). Then a friend of mine told me that Josh Harris, founder of the now-defunct online webcasting company Pseudo.com, had asked him to housesit at his loft for a week, and that if I wanted, I could crash there too.

Harris is best known for his work at Pseudo and another company he founded, Jupiter Communications, but last November, he took on a different kind of project. Flush with the millions of dollars he paid himself through his site, Harris rigged up his gorgeous SoHo loft with 32 cameras and microphones and proclaimed it open to the world. For 100 days, Harris and his girlfriend, Tanya Corrin, lived in full view of whoever visited their new site, www.weliveinpublic.com, where a burgeoning community of chatters offered commentary on Harris' and Corrin's every waking -- and sleeping -- moment.

Ninety-three days later, Corrin moved out and published a bitter tell-all of her life with Harris under the camera, and the two of them may or may not be flaming each other on FuckedCompany. Harris was now broke and taking a break from the project, and the place was empty. Except for us.

The loft is beautiful. Even if I do get a job someday, I will never make enough money to live in its smallest closet. I don't want to exaggerate here, but the place spans at least 12 square miles. The floor is shimmering wood; the television is projected 20 feet high across the side wall; the inside is covered with Warhol silk-screen prints. The furniture is just postmodern and artsy enough to be unbearably uncomfortable.

The pièce de résistance is the control room. It's what I always imagined Darth Vader's sleeping pod looked like on the inside. On the main switchboard are four monitors, each containing 16 little pixelated video screens. From here you can watch the shower cam, the toilet cam, the bed cam, the refrigerator cam, the cat litter cam. I see myself on camera No. 10. It's situated right above the main computer monitor, and focused on the top of my head.

I get on a computer and log onto the site.

I stare into the computer. People are chatting about nothing in particular, calling one another names, complaining about boredom, typical chat room pap. Then another message appears.

Don't just sit there. DO something!

He's right. I'm not doing anything.

I go out for a while to visit another unemployed, depressed friend, and return to the loft that evening. I sit down at a computer and enter the chat. I'm insulted almost immediately.

Now isn't this more interesting than some dick playing on his computer?

I assume he's being sarcastic. I decide to chime in.

I'm Will Leitch, the guy tapping into the computer on camera 10. It's insane here, I think.

After 90 days of this, there aren't many people in the chat room on a Saturday night who aren't regulars. It's immediately clear who the ringleader is, a guy called "testpod69," who quickly starts asking me questions. Apparently, Harris hasn't been too chatty lately, and people are eager for the interactive experience that he promised would take hold. I explain who I am and why I'm here, apologize for the lack of activity -- I am waiting for my friend Jessica to come by -- and notice a link in the bottom right-hand corner of the page.

Visit two of our most popular fansites: www.ourdna.org and www.weliveinthefridge.com. The fridge site has a better name, so I go there first, but it's mainly just a compilation of screen shots of people in the shower. I check out the other one, where I find, my jaw dropped, the latest update.

I'm in the game. People suddenly become curious about what I'm doing. I'm playing Radiohead's "Kid A" on the stereo, and so the chat room people debate whether or not it sucks. (They end up just making fun of my singing.) They want to know if my friend Jessica is hot. They accuse me of picking my nose.

I get up to use the restroom. I rush to return. A message is waiting.

You should wash your hands.

Later I am chastised for having the music too loud, for falling asleep on the couch, stealing rum from the liquor cabinet and wearing an ugly sweater. It's like having my mom around, all the time. Until Jessica arrives. Is he going to fuck her?

Mom never said that! I spend most of the next day trying to convince them that Jessica did not sleep over, that we did not have sex, that she was not blowing me below the console.

The next day, doing laundry, I learn how to take advantage of the chatters. After all, I am a visitor in the house of a stranger. They've lived here for months.

I ask them if Harris allows people to smoke in the loft. I ask if they know where he and Corrin keep the iron. In one particularly surreal moment, I realize I've lost my keys. I enter the chat room and ask if anybody happened to see where I left them. One guy tells me to check my pockets -- and there they are.

As the days pass, I grow more comfortable here. The enormous TV screen is perfect for watching my beloved Illinois basketball team. I've mastered the art of steaming the shower to block the webcams' views and, unexpectedly, I find myself vaguely turned on by the experience. Sometimes I walk around in just my boxer shorts, hoping some hot model will tune in and send me fevered private messages about what she would do if she were here with me.

My friend and I decide to host a small party. Because Harris was kind of a hip, artsy icon here for a short time, word of our plan spreads and more people than we were expecting show. There's a moderately deranged woman who keeps flashing her breasts into the camera. An unsuspecting friend of mine forgets about the toilet cam and, since there's a screen in the front room broadcasting the live feed, gives the entire party a good laugh at her expense. One couple finds a blind spot in the loft -- aided by a strategically placed towel -- and is not heard from for several hours.

I'm the swinging host, a virtual Hugh Hefner! And for a moment, I understand the hubris that brought Harris from the intoxication of wealth and fame and success to the humiliation of bankruptcy and solitude. I am enormous here, the life of the party, the guy who knows all the hidden passageways and sees all the cameras. I am flush with power. I know where the bodies are buried! There are many people at this party, but I'm the one the chatters will want to talk to at the end of the night. They are all watching me!

The party winds down and people filter out. There's a buzz at the front door. As with most intercom systems in New York apartments, I can't understand a damn word the guy outside is saying, so I just buzz him up. A man of indistinct European origin walks in, and up to me. "Are you Will?" I am, I say. "I'm testpod. I saw you were having a party, so I came by. I am going to go use the computer now. You are a nice person." A real chatter, right there in the flesh. A shiver engulfs me. I didn't think I'd actually meet one -- they were supposed to be anonymous. I feel queasy again.

A couple of nights later, a good friend calls me at the loft. She has had a horrible day. Like the rest of us in the wake of the dot-com crash, she's flailing, drifting, falling apart. She needs my support. She weeps and vents and wonders aloud if any of us will ever pull ourselves out of this. Then she stops, midsentence.

"Will, is this all being recorded?" It is. The phones are tapped and played live for the eager audience of strangers. She composes herself, coughs and says she has to go; she'll talk to me tomorrow. I head to the control room and load up weliveinpublic.com. The chatters are out in force.

That woman was so fucking shrill. i thought she'd never shut up. she needs a good fuck.

Suddenly, I wonder if Tanya Corrin made it out in time.

And then it is time to go. Harris is returning from Los Angeles, and I must head out into a snowy New York night, and try to find somewhere else to peddle my wares. It is, after all, his house, even if just for a few more days. And I want to get out before he notices I drank all his booze.

I have not met Josh Harris, and I suspect I never will. In the end, after all the bluster, the grand experiment whimpered out with the ultimate interactive experience: a stranger, living in his home, living his life. Like him, I was tempted, thrilled, and then I left.

And like him, I'm now back out on the street, finding it far more difficult to find people who give a damn outside the chat room.

Will Leitch is the managing editor of Ironminds.

MORE FROM Will Leitch