Washington sobers up on sanctions

The Bush administration plans to abandon 10 years of failed Iraqi policy and instead hit Saddam where it will hurt him most: His cash-lined pockets. 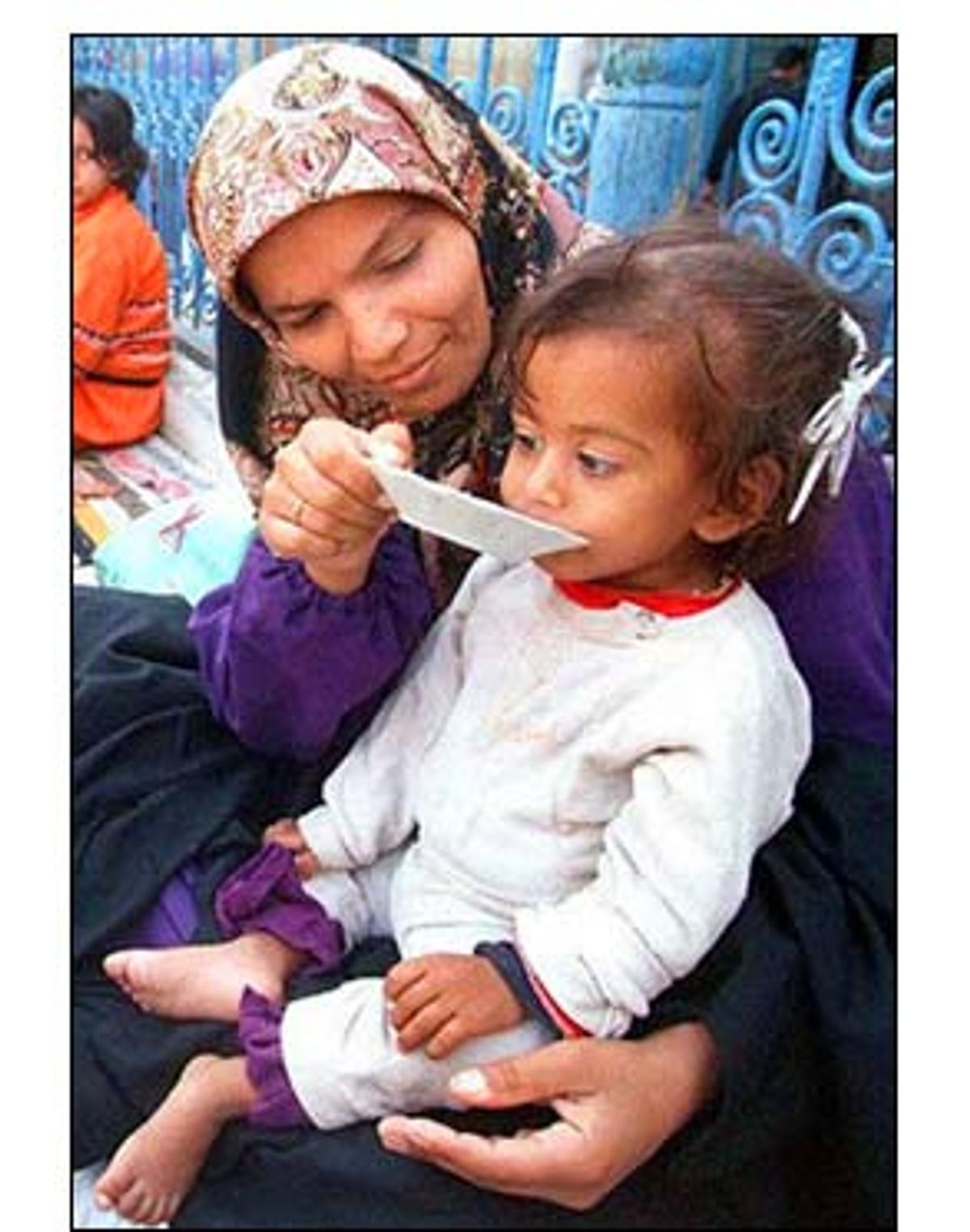 Western observers estimate that as many as 500,000 children under age 5 have died in the past decade as a direct result of sanctions imposed by the United Nations and the United States against Iraq. And despite his own role in impoverishing his people, Iraqi President Saddam Hussein has managed to channel outrage about their plight into strong anti-American sentiment among Arab states.

Against that grim backdrop, Secretary of State Colin Powell announced a major change in policy Tuesday. The Bush administration, he said, will ease general economic and trade sanctions against Iraq and institute more targeted, or "smart," sanctions -- ones designed to hurt Saddam directly rather than placing the burden on civilians.

"The message I've consistently heard," Powell told the press Tuesday during a visit to European leaders in Belgium, "is that overdoing it with the sanctions gives [Saddam] a tool that he is using against us -- and really is not weakening him." During his first trip to the Middle East as secretary of state last weekend, Powell sought support for sanctions from leaders of the allied Arab states. The consensus he found among them was that America must change its approach, or continue to lose their support.

Powell's proposed sanctions would allow basic civilian goods into Iraq, along with "dual-use" items, such as water pumps, that might be of interest to the military but are also necessities of everyday life.

Both the U.S. and the U.N. Security Council leveled the trade sanctions against Iraq more than 10 years ago following the Gulf War. The goal was both to weaken Saddam and to prevent Iraq from developing weapons of mass destruction. But instead, the sanctions have only bolstered Saddam's power inside Iraq.

The sanctions also created an unrealistic barrier to trade within the Persian Gulf region -- one that has steadily crumbled as neighboring countries open up trade with Iraq despite American objections. Even Iraq's nemesis Syria opened a major oil pipeline between the two countries in defiance of the U.N.'s oil-for-food program, allowing Saddam to export hundreds of thousands of barrels of oil a day. But the Syrians still want Saddam out, and have promised Powell to institute a U.N. escrow account that will take Iraq's proceeds from that pipeline out of Saddam's pocket. Such moves, targeted directly at the Iraqi dictator, have many longtime critics of sanctions feeling optimistic.

"Really, it's hard to imagine how these sanctions have lasted as long as they have," says James Paul, executive director of the Global Policy Forum, a nongovernmental organization that monitors U.N. policy. The group, which has close contact with the U.N. Security Council, has long called for targeted rather than general trade sanctions, both for humanitarian and strategic reasons. "The problem is, the general trade sanctions hurt everyone but the leadership," Paul says.

Lifting the current sanctions could serve as a catalyst for a major change in the U.N.'s international sanctions policies, which have been criticized for decades as ineffective. "The problem has been that the U.S. and Britain, because of their role in protecting sanctions against Iraq, have been trying to prevent the U.N. from coming to certain conclusions about sanctions," Paul says. "Once this particular sanctions regime is off the table, then it will be possible for the U.N. Security Council to go ahead and draw the best kind of conclusions about how sanctions in general should be organized."

A revamped U.N. policy would likely exclude general trade sanctions and focus instead on targeting the political leadership by limiting international travel and freezing foreign assets under more tightly controlled timetables. These innovative approaches are credited with bringing down dictators such as Slobodan Milosevic and Alberto Fujimori in the past year. Even more important to Powell, the new policy would entail an embargo of high-tech military equipment and arms sales.

But American weapons could end up flowing into Iraq anyway -- in the form of military aid to Iraqi opposition groups. That would appease American hard-liners who might otherwise view the new sanctions policy as a softer stance against Iraq. Secretary of Defense Don Rumsfeld and Vice President Dick Cheney are particular advocates of military support for the Iraqi opposition, and it would hardly be the first time the U.S. has given military aid to rebels in other nations. But critics warn that Iraqi opposition groups do not have enough critical mass to pose a serious threat to Saddam. And arming them, some say, could exacerbate tensions.

"All that does is escalate an arms race in the region," says Phyllis Bennis, a fellow in Middle East and United Nations affairs at the Institute for Policy Studies. In fact, she says, any flow of weapons into the Middle East -- including arms to Israel -- fuels conflict in the region and effectively bolsters dictatorships. "The U.S. should unilaterally stop exporting all arms to the Middle East on a regionwide basis."

A longtime critic of the current sanctions regime, Bennis is guardedly optimistic about the new policy. The Bush administration's focus on the Persian Gulf region at large, rather than the Israeli-Palestinian conflict, could potentially create a smarter and more effective set of policies. But she fears that the changes may be only skin-deep.

"We don't know what they're going to do. If they only tinker with the sanctions, it's going to be about propaganda and spin. If they're serious," Bennis says, "they'll have to go after suppliers of weapons" and find ways to truly overhaul the sanctions regime.

Global Policy Forum's Paul says pressure to overhaul sanctions has been coming from all sides, not just from the Arab coalition but also from grass-roots organizations and governments in the West, in particular the United Kingdom. In the United States, the vocal opposition has influenced both the State Department and the United Nations. And American oil companies, which wield tremendous influence in foreign policy matters, have pressured the government to revise its policy. "They don't want to see their competitors in Europe get there before they do."

Until now, Saddam has managed to make the actions of America and its allies work for rather than against him every step of the way. Ironically, pressure from oil companies could help lead to a more humanitarian Iraq policy. And if recent bombings don't get in the way, that could result in stronger diplomatic ties with Arab nations that have long seen the United States as unfairly pro-Israel.