If ever there was a word in need of rehab, it is this feline expletive reserved for wimps. 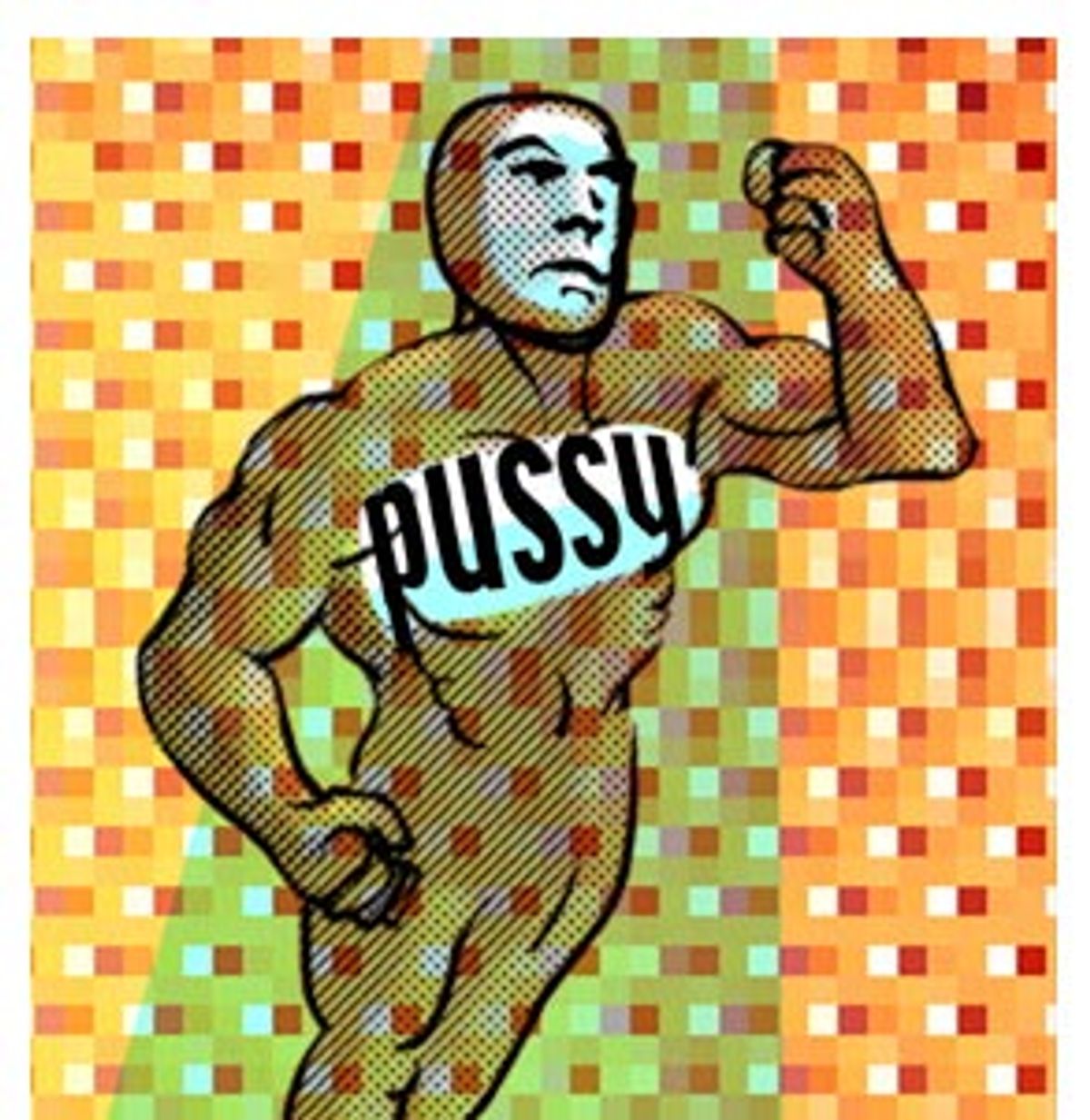 "What a pussy!" shouted my friend Joe. He was complaining to me about a business partner who backed out of a deal at the last minute. Joe wanted sympathy, but I was snagged on the word "pussy."

The night before Joe's outburst, I'd been channel surfing and caught Barbara Walters interviewing Jane Fonda about her performance in Eve Ensler's wildly successful play, "The Vagina Monologues."

"You can't talk about vaginas," Fonda said to Walters, "and not talk about this remarkable ability they have to give birth. It's awesome. If penises could do what vaginas could do, they'd be on postage stamps. I mean, vaginas are absolutely extraordinary."

Listening to Fonda, I thought, "We have come a long way, baby." Just a few years ago, producers forbade actress Cybill Shepherd to utter the V-word on her own TV show. It was, they said, obscene.

I noted the further progress of female genitalia in mainstream media when I spotted fresh-faced actress Claire Danes sporting a "V-Day" T-shirt on the cover of March's issue of Marie Claire, in which women like Brooke Shields, Marisa Tomei and Calista Flockhart were asked, among other things: If your vagina could talk, what would it say, and if it could wear clothes, what would it wear?

So pussy power was in the air when Joe launched his diatribe. Suddenly it struck me as wrong that the word "pussy" is used to imply cowardice or ineffectiveness. Why must we equate weakness with the female sex organ? Why have we for so long?

I began to wonder how one -- how we -- might take the wussy out of pussy.

Is it possible to change the meaning of the word, to restore to "pussy" its deserved glory? Could we use pussy as a compliment? Could pussy denote someone or something as cool or heroic or impressive? "Rosa Parks -- what a pussy!" or "John McCain is way pussy!" or "New York is a big ol' pussy!"

At the moment, "pussy" isn't even used to slight women directly. It is reserved for men, used among them to make fun of one another. It's "sissy" for male heteros. It's the politically correct big boy's way of calling somebody a fag. And, please, don't get me started on "pussy-whipped."

People say "dick," they say "asshole," they say "prick," but they do it with respect. Those words have power and punch, the way the word "cunt" has power. But "cunt" makes people shudder; they judge, perhaps wrongly, the user of the word. Meanwhile, poor "pussy" lies there limp, pathetic and, until this moment, defenseless.

Ensler does a fabulous soliloquy to "cunt" in "The Vagina Monologues." Perched on a stool in her black cocktail dress, barefoot, throwing back her head, shaking her Louise Brooks haircut, she says the word "cunt" for about 10 minutes, obviously relishing each repetition. But what does she say about pussy? If she said anything, I couldn't remember. Is pussy so forgettable?

To find answers -- and to solicit allies in rehabilitating the word -- I went to novelist and essayist Erica Jong, a pioneer in reclaiming language in her own writing, and a recent star of "The Vagina Monologues."

Jong told me that there are, in fact, a couple of references to pussy in the "Monologues," though they're mostly humorous, such as "Don't let him tell you it smells like roses when it's supposed to smell like pussy!"

She thinks changing the popular meaning of the word is possible. "If we use it with positive intent, it will become positive," she said. "I really don't know how long it will take. Language changes, but changes slowly. It depends on the usage -- whether the new connotation catches on."

Jong warned it wouldn't be easy. "My feeling is that we're on the verge of reclaiming 'cunt,' a fine old Middle English word, but we're not there yet with 'pussy,'" said Jong. "Pussy remains humorous, if not insulting. At the moment pussy is a laugh word. It always gets them rolling on the floors in 'Vagina.'"

Jong suggested I go to the vagina mama herself, Ensler, to ask her advice.

She agreed that it's different from cunt. "A cunt is someone who dreams the big dream. You are ambitious. You want to go the distance." Hillary Rodham Clinton, she told me, is a cunt.

Pussy, she said, is more personal. "Pussy is wet, juicy and inviting. It could be used as a word of empowerment or honor. It's a feisty word. There's a little fear, a little danger there -- you better be nice if you want my pussy."

Pussy has so much potential, it's a shame to limit it to the immature and derisive mocking of weak boys. Let's give it a shot in the arm! I envision hit songs featuring "pussy" -- "Who Let the Pussies Out?" or "The Real Slim Pussy" or "The Real Shady Pussy." Hallmark-type cards that read "Thanks for being such a pussy!" Colloquial expressions: "You da pussy!" "Stand up and fight like a pussy!"

And when, and if, Joe consummates his next business deal, I'll be there to toast him, saying, "You're so pussy."

Margot Magowan is a freelance writer in San Francisco.