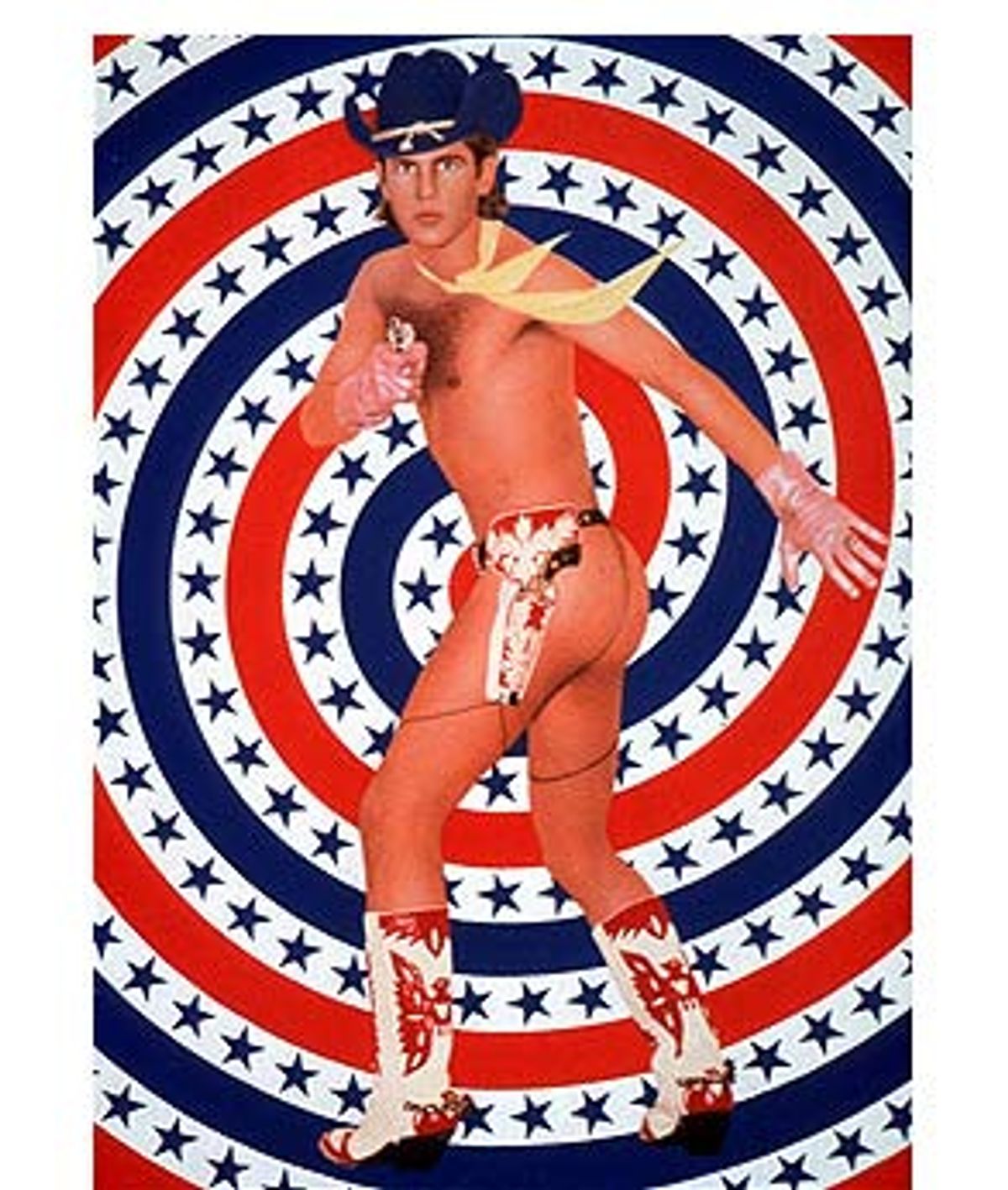 Since the mid-1970s when these two handsome men met, fell in love and began making art together, they've produced a consistently sensuous body of work that's an unabashed mix of commercial and high art, glamour, poetry and homoeroticism. In their work, the latter often directly refers to the sexiness of mythic and religious iconography, like an artful prayer card with a colorful illustration of a loin-clothed Jesus writhing languorously on the cross. They're also quite aware of the frisson of pleasure that comes from the sight of celebrity in a provocative pose; they count Catherine Deneuve, Iggy Pop, Nina Hagen, Yves Saint-Laurent and porn legend Jeff Stryker among their subjects.

Their pictures are confections awash in camp-infused references to religion, sex and fame that instantly strike a chord in the popular imagination, on an international scale. The images, which employ time-honored photo-retouching techniques, are also easily reproducible. They've been more widely seen in books, posters and postcards than in their original form -- a situation of which Pierre et Gilles heartily approve. But popular appeal (especially when it comes with overt sentimentality and heavy gay overtones) sometimes deflects from serious critical assessment, particularly in the United States. The artists' work happily exists in an interesting in-between zone that traverses high art and low culture, but this hasn't left them longing for notice.

Now in their 40s, these guys have become international celebrities in their own right -- as an enduring couple trafficking in magnetic, highly theatrical images of hunky men and female superstars, often adorned with glistening tears, reflective PVC bondage wear or martyrlike trickles of blood. How could they not generate a mythic duo persona?

Pierre et Gilles are currently the subject of a traveling retrospective exhibition (organized by New York's New Museum), which just opened at Yerba Buena Center for the Arts in San Francisco and will be on view through May 6. They were in town to oversee the installation of 56 of their ornately framed pictures and to attend the launch festivities for their new Swatch watch emblazoned with their photo of a mermaid and a sailor (which comes packaged in a rubbery transparent snow dome filled with blue liquid and glitter). And they made some time to talk about their work.

Pierre et Gilles in person are quite different from their pictures, which gush with rich narratives and abound in acres of gym-toned man flesh (and in which they sometimes appear). When I meet the pair at their hotel they seem sweet, shy and modest, even as they sport the severe gay fashion appropriation of pierced and tattooed bikers.

Pierre is short and dark, with close-cropped hair and smoldering eyes, a single tear tattooed to the corner of one of them. Gilles is taller, with a rounder face, even shorter hair and a single labret piercing just above his chin. They're both dressed in Levi's fashion-forward Red line, with a glimpse of elaborate decorative tattoos poking out from the sleeves of their denim jackets.

Along with a translator, we chat in a suite that, appropriately enough, has vibrant leopard print carpeting. (Things are cut a bit short when Pierre reaches for a cigarette, requiring relocation to a smoking floor, and a room with zebra-striped carpet.)

"I don't really know how much we have to say about the sex in our work," Pierre says softly in French when I tell him the section this conversation is headed for. He seems apologetic, not perturbed.

I can't help imagining that the process of making the pictures is as pleasurable as they are to behold. "Our photographs and life are mixed together, so sometimes it does feel like the pictures," Pierre admits. "They come from what we feel for the models and the settings. We photograph people whom we know and love, and certain moments in our life that we'd like to express -- things that we find are beautiful but also potentially cruel."

"We idealize the people we take pictures of," Gilles adds, "but behind that, their own energy comes through. We show the world as it is, but through a poetic eye."

The artists have evolved a workable means of producing their labor-intensive pictures, artisan style, in their home and studio in the suburbs of Paris. They live on the upper floor and have their studio in the basement -- like a micro version of a Hollywood studio in a residential neighborhood. Though both admit to the youthful influence of Tinseltown narrative and design magic, they don't appear to be caught up in it. Nor do their neighbors. "The neighbors peek out when stars show up for a shoot," Gilles says, "but people don't pay us much note. It's France, after all."

While they conceive the images together, Pierre is more of a photographer and shoots the black-and-white and color shots that serve as their base images, while Gilles is the painter who touches up the pictures with pastel-colored dots that create the illusion of sparkles. "We do everything ourselves," they say. That includes constructing the elaborate sets of forests, ice palaces or heavenly fields of grass, setting up the lights and posing their models.

They're on record for their lack of interest in digital set building or retouching. "We like to work hands-on," Pierre says. "We like for the model to be in the middle of the set. There are more surprises, like in theater. It takes longer but it's more real for us."

What's the real makeup secret? "There were 10 guys there jerking off over him," Pierre jests, the ribald subject matter adding a bit of energy to his otherwise demure delivery.

"There's a sensuality to the process of making the pictures, from the beginning to the end. From thinking of the idea, taking the picture, the whole process, even up until the framing," Gilles explains.

Process is also a word that applies to maintaining couple status, especially in the gay world, where there are few stable role models. These two have been together for 25 years, though they don't see themselves as lifestyle icons. "Our work is important to our relationship," Gilles says. "We're very different from each other, but we need and respect each other. We don't hide anything from each other."

"Sure we have conflicts over artwork," Pierre adds. "There's competition between us, but that's what makes it good. Some models Gilles wants, some models I want. Ultimately we get both. In the end we find a way to agree."

Pierre et Gilles are currently finding ways to agree while putting together an exhibition of pictures they've made over the past three years, a show scheduled to open in Paris this fall. It will include, they say, pieces that are darker and more mythological than their earlier works. "It will express a lot of different emotions," the two tell me, in unison. Somehow I expect that all those feelings will manage to look fabulous.