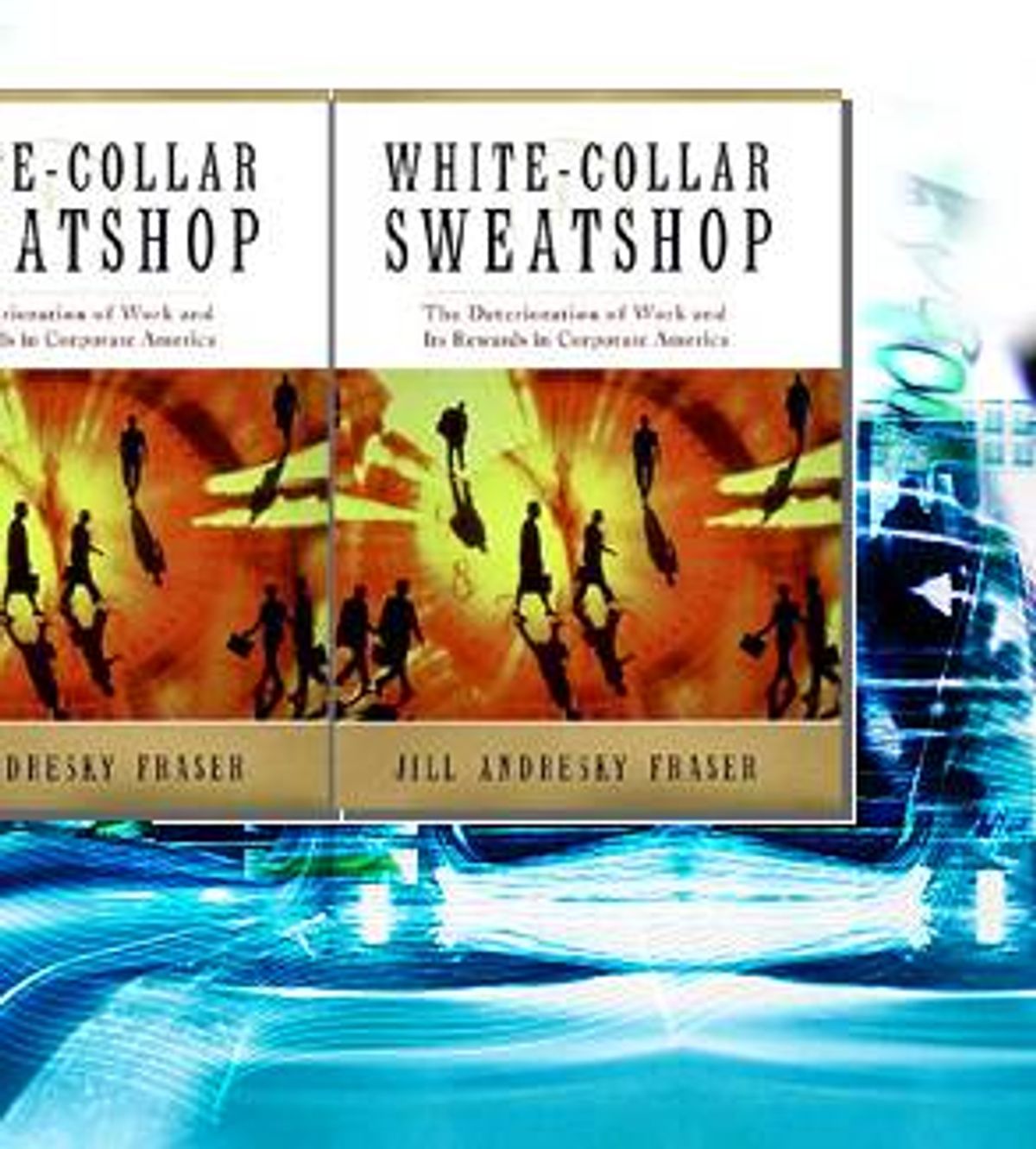 While most Americans would agree that white-collar workers put in more hours per week during the 1990s than ever before, chances are they think that those longer workdays and shorter weekends were the price to be paid for fatter paychecks. Newspaper and magazine stories about stock market whizzes and dot-com revolutionaries have rhapsodized about the juicy perks, big bonuses and take-home laptops corporations lavished on skilled workers in that decade of tight labor markets. Flush with stock options and courted by headhunters during one of the most prosperous decades of the century, these privileged workers, we were told by breathless lifestyle journalists, frequented fancy restaurants and purchased new cars and vacation homes.

Jill Andresky Fraser begs to differ, and she has the statistics to prove it. In her new book, "White-Collar Sweatshop," she argues that the much-hyped economic bounty of the '90s never made it into the wallets of most white-collar Americans. In the years between 1988 and 1998, Fraser writes, the middle 20 percent of American families saw only a $780 increase in annual income, while the richest 5 percent enjoyed a $50,760 surge. "White-Collar Sweatshop" is packed with such eye-opening facts. For example: White-collar males make on average only 6 cents more per hour than they did in 1973, when America was on the brink of the worst economic fallout since the Depression.

And if you think that all new college graduates reveled in $60,000 starting salaries, consider this: Between 1989 and 1997, entry-level wages for male college graduates actually declined by 6.5 percent. Women graduates watched their paychecks fall by 7.4 percent. Fraser cites two Labor Department economists who found that "unmarried men and women between the ages of 18 and 29 were significantly worse off economically during the 1990s than they had been in the 1970s or 1980s."

Fraser, a financial reporter, spent four years interviewing workers in their 20s, baby boomers and older employees from industries such as banking, publishing, technology and telecommunications. She also logged on to disgruntled-worker Web sites and visited chat rooms. "Above all, I have been interested in change," Fraser explains. What she found was that during the past decade of grandiose IPOs and fine young millionaires, life has gotten significantly worse for a whole lot of workers -- and not just economically. They're unhappier, too.

There's a numbing similarity to most of the individual stories Fraser relates -- tales of stress-related illnesses, 24-hour on-call weeks, shrinking pension plans, Big Brother-style e-mail monitoring, a temporary workforce completely bereft of benefits and upward mobility, and bullying workplace atmospheres, not to mention smaller paychecks and harrowing staff purges. Surveying the carnage, Fraser detects a recent transformation in corporate America "equivalent to an industrial revolution for white-collar workers who, by necessity, have learned to adjust."

(It's important to note that Fraser mostly writes about America's larger corporations, not dot-coms. She saves that revolution for later, using it to demonstrate how traditional white-collar Americans preferred to risk everything at a dot-com rather than deal with the drudgery and injustice of their jobs in more traditional industries.)

Grove, author of the appropriately titled "Only the Paranoid Survive" (a sort of corporate Bible for aspiring egomaniacs), once slammed "a stave of wood the size of a baseball bat" on a conference table to rebuke an employee who arrived late for a meeting. At Intel, Grove initiated a creepy "rankings and ratings" system designed to measure the productivity of each employee against his or her co-workers. One weary staffer, tired of looking over his shoulder, complained that "it got so bad you were afraid to help other people."

Other accounts are so painful that they take on a kind of grim humor, as when a single father and technical writer at Intel recalls leaving his small children home alone after he'd tucked them into bed so he could return to the office late at night. The very technology that was supposed to free up leisure time and unchain workers from their offices has led to an invasion of e-mail, fax machines and cellphones in the home. Workers are expected to make a round-the-clock commitment. America Online congratulates itself for offering its employees the occasional e-mail-free weekend, as if having Saturday and Sunday off were a perk. Fraser interviewed a marketing executive from Scarsdale, N.Y., who has come to relish the precious moments when her commuter train passes through a tunnel. At least then, she rationalizes, she won't even have the option of checking voice mail and taking calls on her way home.

In perhaps the most humiliating anecdote in "White-Collar Sweatshop," Fraser describes an "Adopt-an-ATM Machine" program at Bank of America, in which employees had the opportunity to pick up trash around the cash machine of their choice -- during off-work hours. Of 158,000 workers, 2,800 people signed up, obviously because they thought their newly honed custodial skills might lead management to spare them in the next round of layoffs.

Not surprisingly, Fraser concludes that workers' morale has plummeted. As for corporations' attempts to fix the situation, they amount to pathetic band-aids. A NYNEX employee recalls "Winning Ways" retreats during which staffers were told to jump around the room to see "how creative" they could be. Meanwhile, NYNEX management was gradually firing 20 percent of the staff. And although workers compared working at NYNEX to living in the Stalinist Soviet Union, they jumped around as they were told.

How did things get so bad? Fraser traces the degradation of the white-collar workplace back to the 1970s, when a brutal recession scared the paternalistic britches off corporate America and encouraged it to cast off legacies of the postwar era such as leisure time, hearty benefits and comfortable retirements. She specifically targets the '80s, a decade of hostile takeovers and colossal mergers, along with mounting foreign competition, as the years when white-collar workers' lives were changed forever. Slash-and-burn tactics like Ronald Perelman's shutdown of Revlon's pension plan (so that he could grab $100 million of "so-called surplus assets") dominated the corporate landscape.

But perhaps even more disturbing is that for all the ills that workers suffer in the white-collar "sweatshop," the bottom lines of the corporations that crack the whip aren't even the better for them. According to Fraser, the IBMs, AT&Ts and Intels of America have demoralized a newly technologized, stressed-out, paranoid and cynical production line of human cogs solely for the benefit of Wall Street, the economy's "ultimate arbiter," and a handful of CEOs. In the past decade, the latter group watched their salaries jump 490 percent while many of their own companies struggled to survive.

Massive layoffs emerged in the '80s as the cure-all for companies in distress. Forty-five million Americans -- many of whom believed they were exchanging their devotion and doggedness for long-term employment -- got the ax in the past 20 years. During the prosperous years between 1995 and 1997, 6.5 million people were handed pink slips. One woman who survived layoffs at Lehman Bros. was advised to "smile more often so that people would know just how grateful she was to still have her job."

Fraser does find some corporate practices to admire and also names some companies that have made inroads into better management -- places like Pepsico, Netscape, Delta, Southwest Airlines and Reebok. Taking their lead, in a sort of 12-step plan for the recovering corporate miser, Fraser prescribes how companies can reinstate loyalty and faith in the workplace. She suggests true 40-hour workweeks, more vacations, better healthcare and pension plans, more privacy, restrictions on contingent labor, smaller bonuses for CEOs and fewer layoffs. Despite her generally dire findings, Fraser reassures us that life will improve for today's down-and-out organization man, if only because without his loyalty and productivity the bottom line will suffer.

But what about those burned-out folks who can't wait for their bosses to get a clue, the ones I'm assuming Fraser intended to incite to action? Does she want her readers to throw off their ties and pumps and pick up picket signs? Recently, 15,000 unhappy Boeing employees staged a successful 40-day strike, but Fraser acknowledges that, typically, white-collar workers reject the idea of unionizing. For the most part, corporate Americans don't want to associate with a remedy they consider blue-collar.

And the truth is, despite the legitimate, sometimes heartbreaking complaints Fraser heard, many white-collar types take pride in working 11-hour days. The Darwinian corporate atmosphere has grown so deadly -- Fraser's brilliant example is a Lexus commercial's boast "Sure, We Take Vacations. They're Called Lunch Breaks" -- that it seems hard to imagine mutual trust and cooperation among co-workers, let alone that they would feel enough freedom to leave the office for a leisurely midday meal. As much of Fraser's research indicates, battalions of temporary workers and freelancers hungrily await permanent job openings. Who wants to get caught moaning about a well-paying job?

Fraser does offer some models for protest: consumer boycotts, resistance to investing in the stocks of "bad" companies. There are individual moments of rebellion as well. Some of Fraser's subjects have refused to carry cellphones and beepers. Many of them have taken up arms, if only electronic ones, by voicing their complaints over the Internet. FACE Intel, a Web site maintained by former and current Intel employees, features a photo of a demonstration and a discussion titled "Suicide and Heart Attacks, Stress Kills." At the top of the page looms a quote from Holocaust historian Elie Wiesel.

Despite these surprising and inspiring moments, however, Fraser's suggestions for worker activism ultimately don't match the authority with which she makes her initial exposé. "White-Collar Sweatshop" offers such a convincing case for the plight of white-collar workers, and paints such a good portrait of their strange resolve to stick it out, that you're left with the indelible image of a pasty-faced worker hiding behind cube walls, hunched over the keyboard (in an ergonomically incorrect posture, of course) and passively e-mailing friends about how much life, and his job, sucks. The very fact that she directs her most constructive advice to CEOs rather than to their minions unwittingly betrays who holds all the cards. Perhaps Fraser's feeble call for white-collar sweatshop workers to strike back serves as a testament to how truly defenseless they have become.