Calling a reviewer at home and putting a bounty on a critic are two ways unwise writers respond to negative reviews. 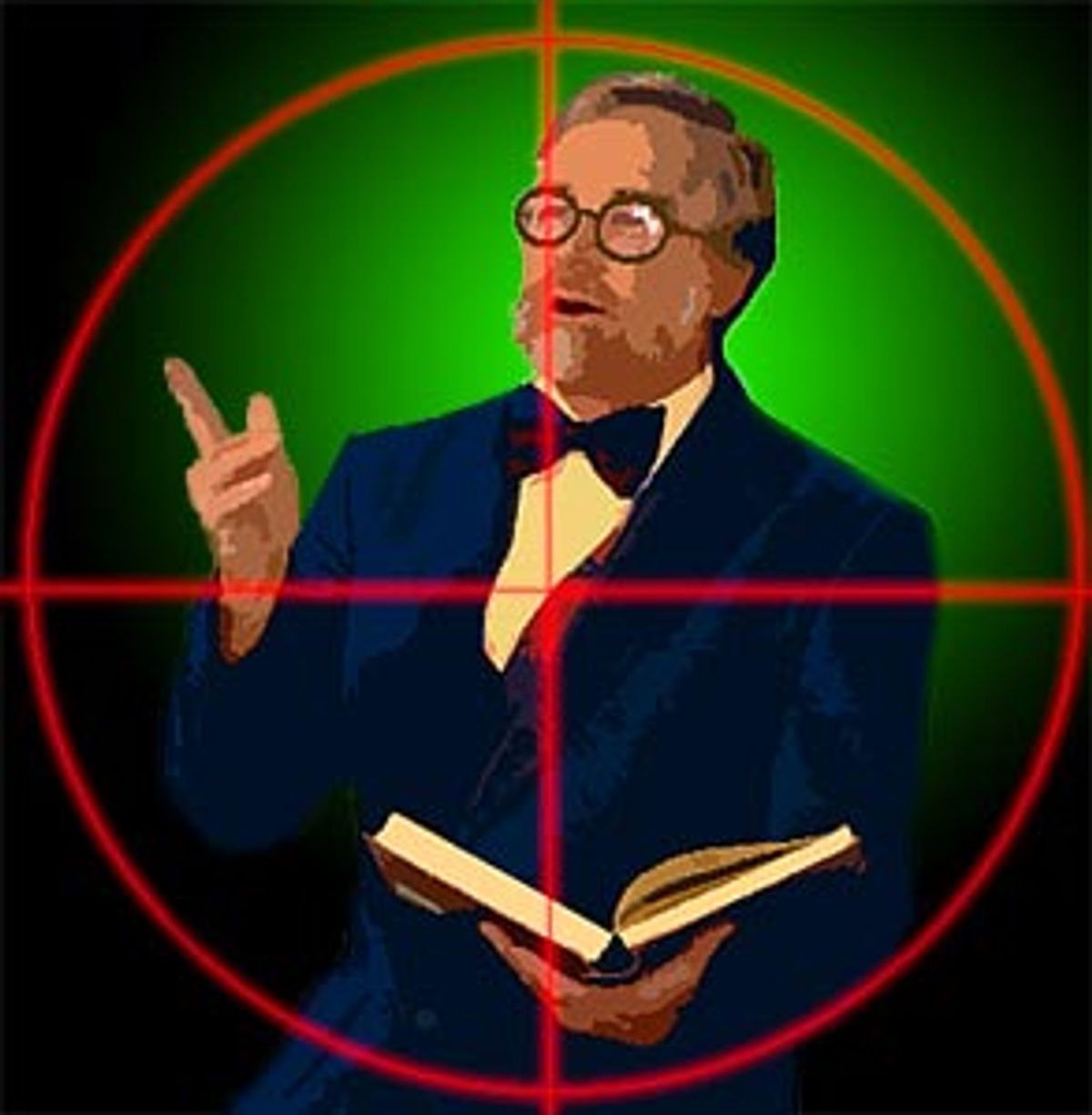 No author enjoys getting a bad review, and it's probably especially irritating to read a slam of your book in Publisher's Weekly, the book industry's trade journal, because P.W. reviews are unsigned, so you can't even conjure an image of your adversary. Last week, Jaime Clark, a first-time novelist who was reviewed negatively in P.W., decided to take matters into his own hands: In an e-mail sent to a list of literary editors, Clark offered to pay $1,000 to anyone who would tell him the name of the reviewer. "You need not reveal your identity to collect this bounty," he assured his potential Judas, "but you must be able to substantiate your information."

A bounty is being offered over a negative book review? Somehow, it's not surprising for anyone who's spent time in the trenches of the book review world. Most disappointed authors, of course, still follow the age-old tradition of sucking it up and complaining to their friends. They bear in mind Paul Fussell's sage advice in the essay "Being Reviewed": At all costs, avoid the ABM -- author's big mistake -- of writing a nasty letter complaining about a review of your own work. "If the bad review has made him look like a ninny," Fussell says about the type of prickly author who can't stomach criticism, "his letter of outrage makes him look like an ass."

But there's still an enduring category of author who feels that a bad review of his or her book is no mere difference of opinion, however ill-informed and wrongheaded the reviewer's take may be. It's an injustice that must be remedied -- a "shocking and irresponsible" (to quote the bounty-offering P.W. reviewee) wrong that they must personally right.

Recently, first-time memoirist Deborah Copaken Kogan got a mixed review from a prominent critic at a print magazine. After the review was published she called him, twice, at home, even though his number is unlisted. He declined to engage in a personal conversation and suggested that she send a letter with her concerns to the magazine. A fat envelope addressed to the reviewer arrived at the publication's offices. (Judging by other letters Kogan has sent to other book-review editors, the missive was a classic ABM, the kind that details disagreements with the review under the guise of "concern" over the publication's reputation for accuracy; we'll never know, though, since, after having the first sentence read to him and judging it inapropriately personal, he had the letter thrown out.)

Last month, a similarly dissatisfied author peppered Salon with e-mails filled with vague references to "legal" recourse. The author took issue with the fact that the Salon reviewer characterized the sources used in his nonfiction book as less than stellar. The quality of a source can be a matter of opinion. But to the kind of author who considers even adjectives like "boring" and "tendentious" to be inaccuracies when applied to his book, the questioning of a source's dependability seems like a flagrant error in fact and a violation of his rights.

The New York media and publishing world is notoriously clubby. People who write books, people who publish books and people who write book reviews often know each other and socialize together. This can foster an atmosphere of paranoia about reviewers' "motives," as former New York magazine book critic Walter Kirn recently lamented in the New York Times Book Review: "No one who has any stake in the issue will ever believe that a negative review was the work of a lone gunman. No, there must be a plot. A web of evil."

But this same atmosphere can also lull some well-connected first-time authors into a false sense of security as they await their book's publication. For these authors, the first, cold splash of negative criticism comes as a particular shock since they're used to soaking in a warm bath of peer approval.

These writers not only see the media and book world as clubby; they expect it to function like an actual club -- or perhaps like a top-notch hotel. When service isn't sufficiently deferential, they demand to speak to the manager. This category appears to include the bounty-offering novelist, whose book sports a blurb from Bret Easton Ellis, an endorsement that may have seemed like a one-way ticket to the big time ("Imagine Britney Spears narrating 'The Day of the Locust' as a gentle fable and you'll get the idea," Ellis wrote, not altogether helpfully.)

In last week's e-mail to the media, Clark seemed dangerously unclear on the purpose of negative reviews, or for that matter, all reviews. The treatment he received from P.W. was, he protested, way out of bounds: "I do not object to unfavorable reviews," he said, but this one seemed intended "to persuade anyone within earshot to steer clear of my book."

Still, offering the bounty is a stroke of originality. Perhaps not since cheeky novelist Leslie Epstein made New York Times reviewer Michiko Kakutani a character in his novel "Ice Fire Water," then took out tiny classified ads on the front page of the Times imploring Kakutani to take notice of his book, has an author broken the fourth wall between reviewer and reviewee so creatively. (An upset Kakutani later had the paper's advertising department nix the ads.) But it's still unclear what, for all his Wild West bravado, the irate Clark intends to do if he finds out the reviewer's name. Since he did not respond to an e-mail asking about his plans (and his publicist did not return a phone call making the same request), we can only hope that a really, really, really angry ABM was the extent of it.

But who knows? Clark may have had a change of heart and decided simply to let the grievous insult pass. Maybe he took another of Fussell's suggestions and got back to work on his next book instead of fussing over how the world was responding to this one. In any case, he should take comfort from the critic who fielded the phone calls at home from Kogan: His own first book got a terrible review in P.W., too, and he remembers the sting the day he read it. "But at a certain point a writer has to realize," he says, "that you put your work out there for other people. Expecting to control their responses to it is a willful refusal to be in the world of grown-ups."