Brad Pitt and Julia Roberts, together at last in a final burp of Tarantinoism. 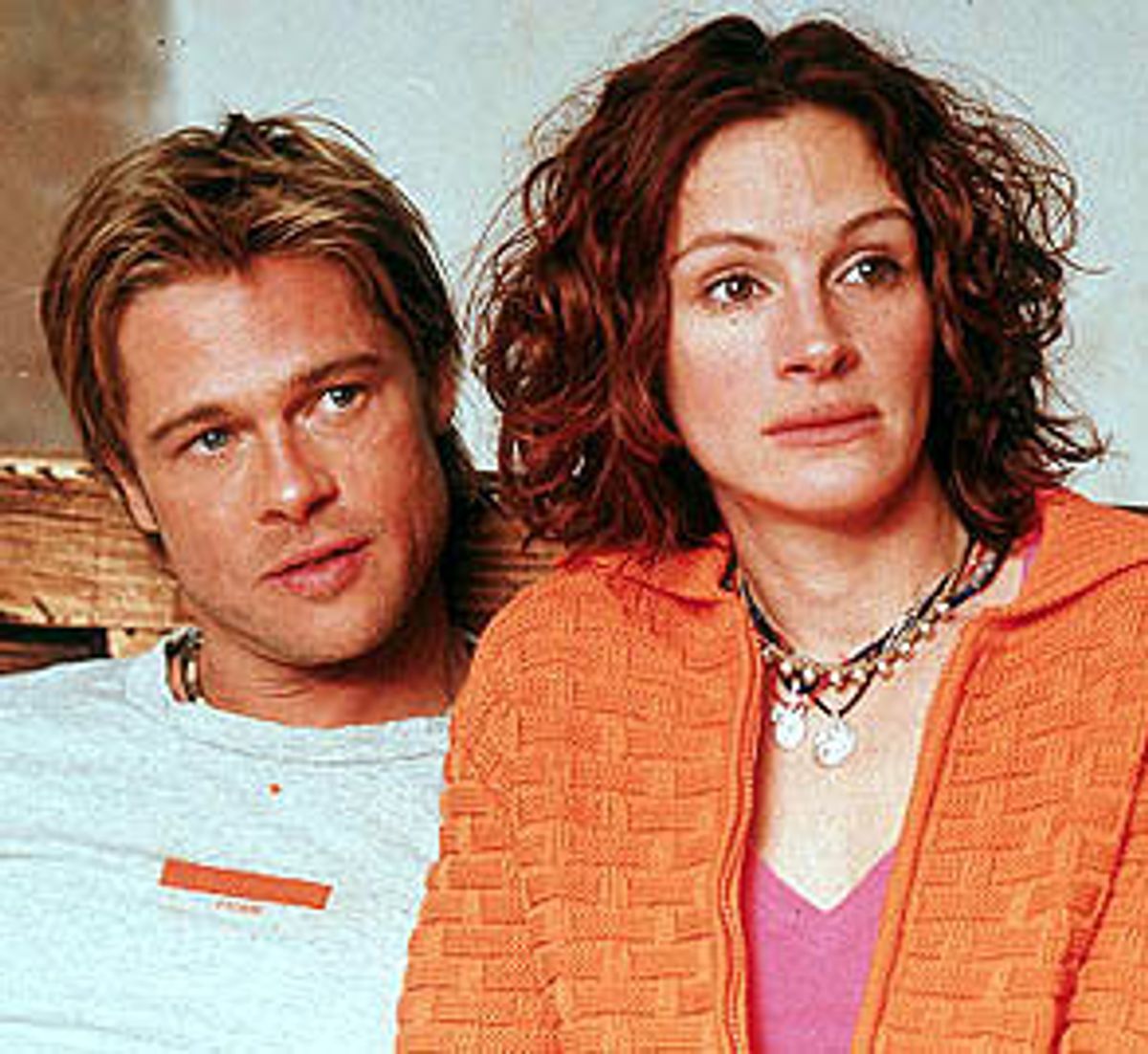 I didn't have nearly as much fun at "The Mexican" as I did reading a piece of graffiti on a poster for it at a Brooklyn subway station last week. Next to the image of Julia Roberts and Brad Pitt kissing, some wag scribbled, "'The Mexican?' Who's it about, their pool boy?"

To think that the TV hacks are raking in the big bucks while true talent is reduced to writing on subway walls. "The Mexican" is actually an ornate pistola from south of the border. Everybody has a story to tell about it and everybody agrees it's cursed. The last movie by the director, Gore Verbinski, was "Mouse Hunt." This one might be called "Gun Hunt." Brad Pitt plays an all-around fuckup named Jerry, who gets himself into a jam by the most original means possible. Running a red light, he slams into a car driven by a mob boss. The cops show up and find an about-to-be victim in the mobster's trunk. The baddie gets put away, and Pitt winds up paying for his mistake by doing favors for him, every one of which he fouls up. Mr. Big gives Jerry one last chance: get his hands on this famous pistol or die.

What happens to Jerry in old Meh-hee-co seems like a vacation compared to life with his girlfriend, Sam (Julia Roberts). A shrew who has gobbled down more self-help manuals than you could shake Oprah at, Sam is convinced that Jerry's decision to try and save his life rather than move with her to Vegas as he promised is evidence of his selfishness. Sam tells him adios before he even hits the border and hotfoots it for Vegas. It doesn't take long for this New Age Red Riding Hood to meet the Big Bad Wolf in the person of Leroy (James Gandolfini), a hit man whom Jerry's debtees send to stick with Sam so they can be sure Jerry will turn over the gun when he gets his hands on it.

You can probably guess that a picture called "The Mexican" about a clueless American getting himself into trouble will feature lots of comic squalor. What you probably can't guess is that the entire movie looks as if it were processed in the toilet of a Tijuana jail cell. Shot by Dariusz Wolski in colors that are bleached out, over bright and flat, "The Mexican" is the ugliest-looking major studio release in recent memory. It's one thing for a movie to take place in a procession of anonymous hotel rooms, sleazy cantinas, dust-pile towns and functional offices where the mob's worker ants keep the empire running. It's quite another for it to look as if the people who designed those places put the movie together. The movie's end credits include mentions of drivers and security guards for Julia Roberts and the people who did her hair and makeup. Before working for Verbinski and Wolski (it sounds like a Polish bakery) again, she should hire someone to make sure that the lighting doesn't make her and the other actors look as if they're sitting in a diner at 3 a.m.

"The Mexican" plays like the last burp of Tarantinoism, the lingering remnant of a long-digested meal. Neither the pace nor the camera angles are particularly frantic. (They aren't in Tarantino either.) The comparison comes from the way Verbinski and screenwriter J.H. Wyman want to mix the comic and the horrible: like a hit man disposing of his bloody gloves to the giddy-up ending of Nancy Sinatra's "These Boots Are Made for Walkin'."

The tone is supposed to be jittery, to keep you off-balance, and to remind you of its oddities with plums of calculatedly quirky dialogue. Some of it works. The scenes between Roberts' Sam and Gandolfini's Leroy flirt with some very un-PC attitudes, even going so far as to bait the audience. When Leroy abducts Sam he tells her he has no interest in raping her. When she finds out why, she tells him she's relieved because she thought he found her so repulsive he couldn't imagine having sex with her. It's a line designed to get people into a huff, and Gandolfini gives it just enough time to sink in before he says, "Rape's a crime of hatred, not attraction." The joke, of course, is that it's a hit man that's parroting the correct attitudes.

But those moments are little distractions in the long slog toward the finish line. "The Mexican" is one of those movies you go to see at 7 p.m., look at your watch three hours later and see that it says 7:45. You can count on the comic-violent interludes to punctuate the story at regular intervals. The film isn't grim but it's got no spirit, none of the wildness and release you'd expect from what's essentially a road comedy. Verbinski stages a scene of a boa'ed Roberts dancing in her hotel room with Gandolfini looking like he was playing an oldies station while cleaning out the garage. The movie wants to surprise us with its unexpected, spit-in-your-eye approach but it's all rather cheerless.

There's a good joke in the character of Sam. She's a type that we've all run into: one ready to parse any moment in a relationship for its subtext, but who really uses the pop-psych terms she's picked up as a way of bullying her partner into giving her what she wants. The character is meant to express the comedy of the completely selfish woman who feels aggrieved, searching for herself.

Fifteen years ago, the role would have been perfect for Catherine O'Hara. Today, Cameron Diaz could probably run with it or, if the filmmakers had wanted to venture a little further out into the ether, Brittany Murphy. But among Julia Roberts' many virtues there is not, alas, either a manic spark or a whirligig spirit of comic ditziness. When Roberts can take charge, as she did in "Erin Brockovich," she's fine. But she has a potentially fatal flaw for someone who keeps getting cast in romantic comedies: There is absolutely nothing yielding about her. So there's nothing endearing about Sam: She simply comes off as a nag fully aware of what she's doing.

Brad Pitt acts as if he should be given brownie points for looking like he does and acting like a goof. He recalls no one so much as Ryan O'Neal in the comedies he made with Peter Bogdanovich, and like O'Neal he makes the choice that's fatal to comedy: acting like he knows that what he's doing is funny. It's best that Pitt and Roberts don't really start to have scenes together until the movie's last half-hour: The chemistry between them is zip.

The second-best performance in the movie is from a mangy mutt Jerry acquires with a beat-up pickup truck and never quite manages to get rid off. Every time he appears, the dog is carrying around a deflated football as if he were just waiting for someone to show up and show him a good time. It didn't take long for me to start identifying with him.

The best performance, and something of a miracle given what he has to work with, is from James Gandolfini, from "The Sopranos, who's so calm and assured that everyone else's scurrying around blows away like so much chaff. His Leroy is a guy whose simplicity cuts right through the self-created dramas of everyone around him. When Sam starts spilling her love troubles, Leroy's responses cut right to the chase. He tells he he doesn't believe in shrinks but he's got the equilibrium of a dream shrink. The alleged gag of the performance is that Leroy is gay, a joke that rests on a stupid stereotype, namely that no one who looks like James Gandolfini could ever be gay. Gandolfini triumphs simply by not treating Leroy's gayness as a joke.

The preview audience I saw it with laughed nervously a few times where neither Gandolfini nor Verbinski are going for a laugh. Leroy and Sam pick up a guy they meet in a cafe and Gandolfini tells Roberts he's fallen for the guy. He tells her he confessed to him that he's a hit man and received the lover's blessing of "the past doesn't matter" in return. The sequence goes right to your heart, probably because it seems to come directly from his. A later scene where Pitt's Jerry is allowed to get the upper hand on Leroy feels as if the gods that govern the movies have lost their power. Watching Brad Pitt exult in triumph over James Gandolfini is like waking up in some alternate universe where Gorgeous George has just knocked out Muhammad Ali. But Gandolfini is the real champ here. When Pitt and Roberts storm out of the car in an argument and Gandolfini sits there patiently, no more than rolling his eyes in frustration, you want to tell him to start the engine and leave these two in the dust. He's the only traveling companion in "The Mexican" who makes the trip seem worth it.