This reality TV spoof is even harder to watch than the sadistic, unwatchable crap it parodies. 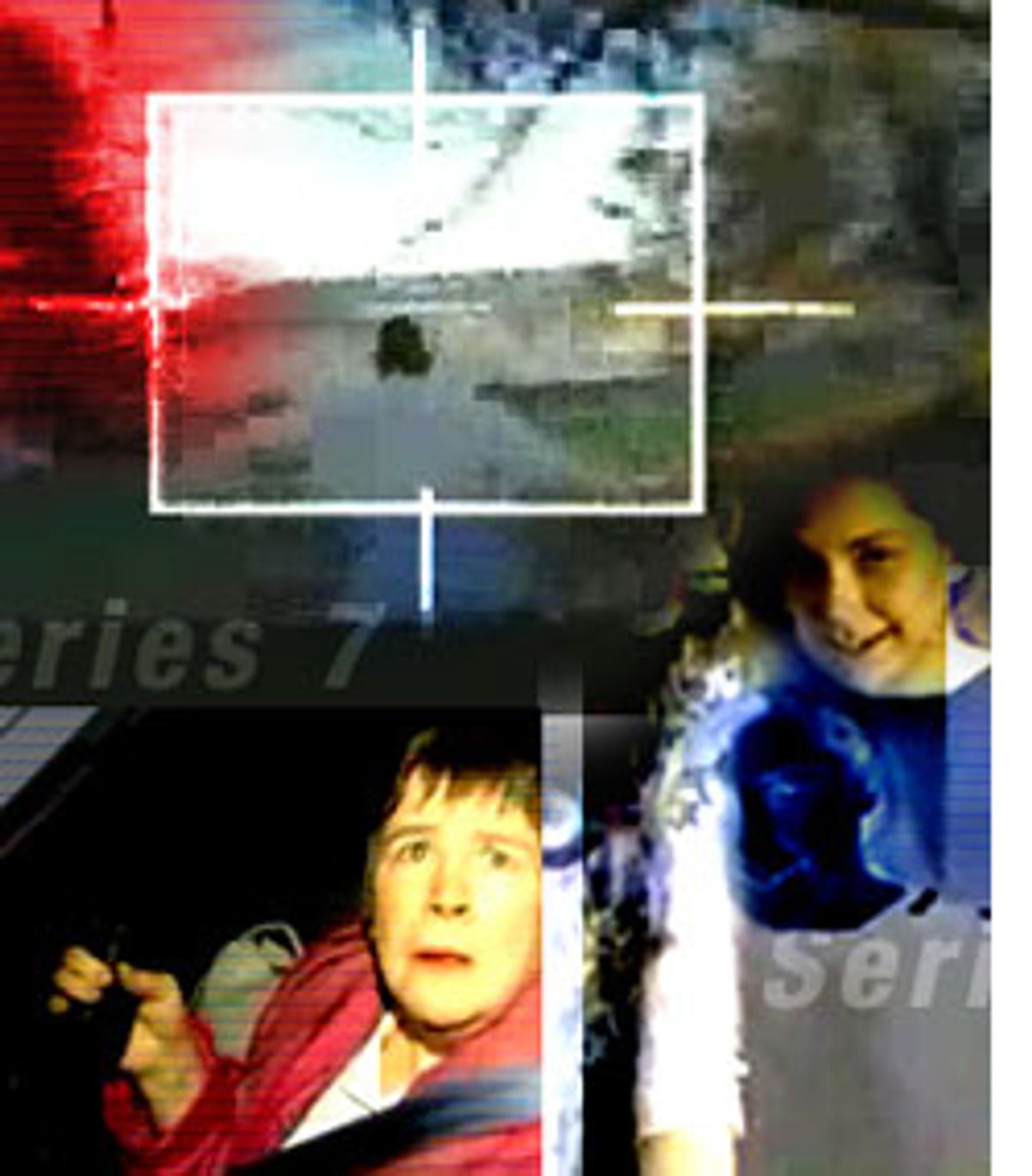 "Series 7" is a painstaking, often brilliantly executed imitation of unwatchable crap. Now, excuse me if I'm wildly off-base here, but doesn't that sort of make it worse than regular old unwatchable crap? Writer-director Daniel Minahan, an escapee from the television industry with an ax to grind, conceived of this satire a few years back, based on the first wave of '90s reality TV: "The Real World," "Cops," etc. But you can't satirize something that's moving faster than you are. For all its pitch-perfect emulation of the genre's clichés, "Series 7" arrives looking, if anything, not quite as invasive or sadistic as "Survivor" or "Temptation Island."

Sure, "Series 7" has a central gambit that's pretty extreme: It presents itself as three episodes in a TV show called "The Contenders" whose contestants are actually, rather than metaphorically, trying to kill each other. But that's the kind of obvious irony you'd expect from a "Saturday Night Live" reality-TV spoof and, as hard as it works, "Series 7" really never rises above that level. With its tale of two lovers on the run trying to escape the roving eye of consumer society, Minahan's film wants to belong to a tradition that stretches back through "The Truman Show" to George Orwell's "1984." But like the shows it intends to parody (except perhaps for the genuinely scary "Cops"), "Series 7" can't offer enough reality to be genuinely terrifying, or enough dramatic craft for pathos and tragedy.

When we join "The Contenders," a rumpled, eight-months-pregnant woman named Dawn (Brooke Smith) is the reigning champion, having dispatched 10 opponents in two previous rounds. Dawn is unmistakably Minahan's great creation here, and somehow the fact that I find "Series 7" pretty much worthless as art doesn't change my feelings about her. Clad in shapeless denim dresses, with a macramé handbag over one shoulder and her hair in a distracted blond frizzle, Dawn hurries from destination to destination like any suburban SUV warrior anywhere in North America. The fact that she bursts into a convenience store not to pick up a loaf of balloon bread but to waste a total stranger is merely a detail in her struggle to provide for her unborn child. She doesn't enjoy killing, she assures the camera in a "candid" interview between action scenes. She has no choice; any mother would do the same thing.

With his complete litany of flashbacks and flash-forwards, graphics, teasers, ominous voiceovers ("Real people. In real danger. In a fight for their lives!") and cutaway interviews, Minahan has certainly created a convincing world for his fictional show. To my taste, it's a world we already live in too much of the time, and I sure as hell don't want to visit it, given a choice. As one of the unctuous narrators informs us, if Dawn survives the third defense of her title, she and her baby will be free of the show. There's no prize other than survival. What has happened in the outside world to make indentured servitude and gladiatorial combat possible on television? Minahan doesn't try to answer this question, although it may not need answering.

To heighten Dawn's drama the producers are staging Series 7 of "The Contenders" in Newbury, Conn., the hometown she left behind years earlier. (It's actually Minahan's real-life hometown of Danbury.) As we drive down one faceless suburban drag, the marquee of a chain motel urges, "GOOD LUCK DAWN." In a tone of sad resignation, she observes, "Oh my God, everything looks like it's been dipped in plastic." That's about the most genuine and affecting moment in "Series 7," but Minahan's dense and gimmicky structure doesn't permit him to spend more time with Dawn, whose story is aching to be told.

About the only thing in Newbury not yet dipped in plastic are Dawn's painful memories of her high-school sweetheart Jeff (Glenn Fitzgerald), who is dying of testicular cancer and is now drafted, of course, to be one of her adversaries. Jeff and Dawn once made a Goth-flavored video set to Joy Division's classic "Love Will Tear Us Apart" (which we see in its silly, heartbreaking entirety) and now he's literally got no balls and they're supposed to kill each other on national TV.

This reunion -- and the romantic triangle whose third point is Doria (Angelina Phillips), Jeff's tormented wife -- is so powerful that everything else in "Series 7" seems like a distraction. The other random citizens drafted to become "contenders" are pretty much one-note jokes. Tony (real-life New York cop Michael Kaycheck) is a cokehead construction worker who calls his mother to apologize for screwing up his life. Connie (Marylouise Burke) is a God-fearing nurse who turns out, naturally enough, to be a ruthless killer. (Someone should tell Minahan, however, that religious Catholics don't approve of contraception.) Lindsay (Merritt Wever) is a media-savvy teenager, egged on by her bossy mom (Donna Hanover, aka the estranged Mrs. Rudy Giuliani). Franklin (Richard Venture) is an aging crank in a trailer, whose role is so generic that he gets almost no screen time.

Minahan's wit and feel for the medium never fail him; when Jeff and Dawn try to rebel against "The Contenders" and strike out on their own, we see their actions through an "Unsolved Mysteries"-style dramatization, featuring actors who look nothing like them. What he can't offer, however, is any reason why "Series 7" was worth making. I felt like dropping to my knees in the theater and praying for this smug, irritating fake-reality-TV show to go away, leaving these three terrific actors (and characters) in something resembling a real movie. But it wouldn't have worked; God would have spurned my plea. Everything, including me, had been dipped in plastic.