Species from birds to butterflies are doing strange things, and a new report blames the behavior on the Earth's rising temperature. 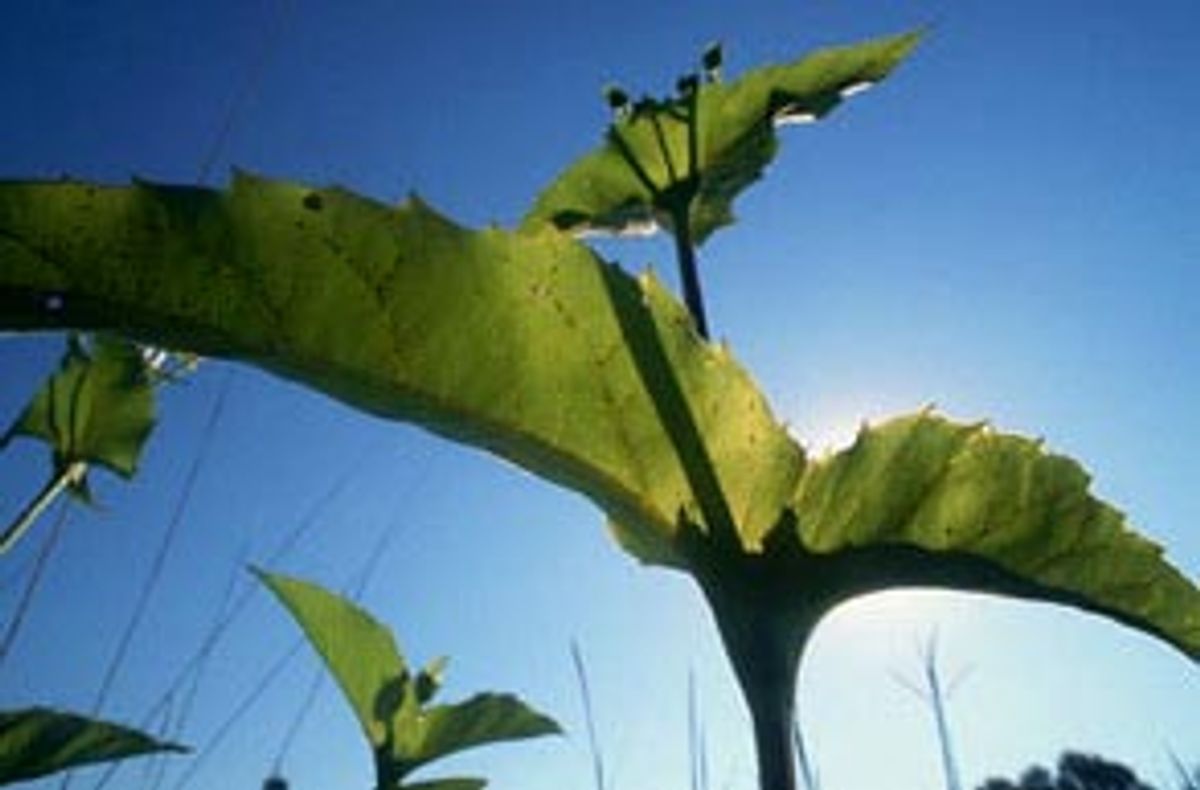 For the last 20 years, on average, the red-chested cardinal has made its singing debut at the Leopold Memorial Reserve in Baraboo, Wisc., on Feb. 8. This year biologists recorded its first song more than a month early. And the hepatica, a flower from the buttercup family, has pushed its blooming date up by about two and a half weeks. In fact, researchers report that more than a third of the 300 species found on this 1,400 acre piece of land are coming in early.

And the cause? They say temperature changes.

According to a report issued last week by the United Nations Intergovernmental Panel on Climate Change (IPCC), the strange things going on at the Leopold Reserve are not isolated. Researchers found that more than 80 percent of the 500 species studied -- including birds, amphibians, mammals, reptiles, plants, mollusks, insects and other invertebrates -- are changing in response to rising temperatures. Some birds are migrating up to three weeks earlier now; other animals are migrating outside their natural habitat, edging closer to the poles and living at higher altitudes.

"There's no doubt there will be extinction," says Terry Root, the University of Michigan professor who led the research. "Because you have species that have small ranges, a lot of them won't be able to move quickly [enough] since the temperature is rising so fast."

The researchers who conducted the analysis of more than 44 studies on the topic say this can create a slew of problems since not all birds, for example, are changing their migration pattern. Some birds, previously thought to migrate in response to day length -- the hours of light in a given day -- are now believed to cue to temperature instead. Root says the ones still responding to day length may end up arriving at a habitat where other bird species have already set up shop. This could make it difficult for them to find a spot to nest, possibly setting off a whole set of other complications.

In January the IPCC released the first installment of its study, which focused on the science of global warming and predicted that the earth's atmosphere could warm up by 10.4 degrees Fahrenheit during the next 100 years. But this latest report devotes many of its 1,000 pages to a hard look at the damage that global warming has already caused. For example, as ice packs break up, polar bears will have a more difficult time stalking their prey and feeding, since seals will no longer need breathing holes to get air. It also forecasts that, as temperatures rise, there will be more deaths from heat stress, as well as an increase in the number of people exposed to vector- and water-borne diseases like malaria and cholera. The report also predicts decreased water for those living in the subtropics, and more flooding in many low-lying areas, like Bangladesh, as sea levels continue to rise.

"What we're seeing is movement into uncharted territory, into a warmer state that we have not known for the last 450,000 or perhaps up to a million years," says James McCarthy, professor of oceanography at Harvard University and co-chairman of the IPCC panel that issued the report. "So it will take many organisms into a condition they haven't been in."

Researchers say that we can learn a lot about our own fate by studying global warming's effect on different animal and plant species.

"It's sort of an early warning system," says Jeff Price, director of climate change impact studies at the American Bird Conservancy and co-author of the report. "You know the cliché of the canary in the coal mine -- if the canary croaked, the miners knew to get out in a hurry. Plants and wildlife are barometers for the environment," Price says.

In the Northern Hemisphere, satellite images show that spring is beginning about 11 days earlier than it did about 50 years ago. Warblers, Baltimore orioles and robins -- spring-migrating birds -- are procreating earlier than they did three decades ago. The clock is also moving up for other ecosystems as well -- the time in which trees, like the cherry blossoms in Japan, bloom; when birds lay their eggs; when the aphid eggs hatch; and when the common toad breeds. Also, the coloration of the ladybird beetle has lightened, and the Edith's checkerspot butterfly is moving farther north to cooler areas. All of these are almost meaningless events, Root says, unless looked at as a whole. And that picture depicts a world in which global warming is already leaving its imprint.

The work of Root and her colleagues is being heralded by numerous environmentalists as the "smoking gun" of the whole global warming debate, one that finally shows how large an effect even small changes in temperature can have on our biological systems.

"For the first time, it shows people in front of their very eyes what global warming is," says Jennifer Morgan, director of World Wildlife Fund's Climate Change Campaign. "What's very interesting to me is it links everyday life with hard scientific data. We all have the conversations about how the flowers are blooming this year and the birds that are arriving early, and Root's study provides the answer to the public. Is this global warming? The answer is yes."

But those on the front lines of observation -- birdwatchers -- are not so sure. Since the data used to analyze many bird studies are gathered from birdwatchers, and the number of them perched out there has increased exponentially in recent years, critics say this may be one of the reasons why there has been a shift in recorded migration dates.

"I would be hesitant to go too far out on a limb," says Eirik A.T. Blom, contributing editor to Bird Watcher's Digest and former editor of Birding Magazine. "Everyone is in a frenzy. It's easy to get hooked up on global warming and say this is part of it. But biologically it doesn't necessarily make sense -- [although] eventually it will have a big impact and over a long period of time, it'll change the migratory patterns of birds." But for something like this to occur, he says, will take many more years.

Peter Dunn, an assistant professor of biological sciences at the University of Wisconsin at Milwaukee, says he was initially skeptical, too. When he first read about the study on birds in the U.K. that showed they were laying their eggs earlier in response to temperature, he didn't believe that this could be found on a wider scale. Dunn was already in the process of analyzing nest records of North American tree swallows, dating back to the 1950s, when he decided to take a peek at the temperature change during those years, too. His study, published in the Proceedings of the Royal Society two years ago, found that as temperatures have risen, these birds -- one of the most common species in the United States -- are laying their eggs up to nine days earlier.

"I thought I wouldn't find as strong of a pattern because I was looking at the entire continent," says Dunn. "But their food abundance is changing with the temperature. The food that they're eating are aerial insects, and their abundance is directly correlated with air temperature. When it's cold out, there are not as much insects; when it's warm, the insects start to come out during spring and summer."

While Dunn says he's certain that it's happening with birds like the tree swallow, he wonders whether or not birds that have different food sources -- such as red-breasted robins, which eat worms -- are being as drastically affected by temperature change. So far the swallow's clutch size (the number of eggs it produces) has not changed, but he says it's still too early to tell whether there are ramifications to breeding earlier. In fact, there may be some positive aspects. One, he says, is that these chicks may have a better chance of surviving since they will have longer to develop and will have a head start on life.

Critics of the U.N. report, such as University of Virginia environmental sciences professor Patrick Michaels, believe the IPCC report grossly exaggerates the inability of these species, and of humans, to adapt to temperature change.

"It's science fiction," says Michaels, who is also a senior fellow at the libertarian Cato Institute. "The reason for it is quite simple: The dire scenarios are based on assumptions that have extremely low probability. Of all the assumptions that are made, the lowest probability one is that people will sit idly by over the course of 100 years and not adapt to slowly evolving changes in their weather and climate."

As for the butterflies like the Edith's checkerspot, which is continuing to move north where it is cooler, Root says we will reach a point in which there is either nowhere farther north a species can move to, or they will run into different habitats, like cities, where they will be unable to settle. This specific species will run into San Diego, a certain roadblock to adaptation, she says.

Root says the solution is to start creating reserves that run north-south, so animals and other species can have room to adapt. And it's better to start working on it now, she says, before conditions worsen. To those who doubt global warming's effects, Root offers this analogy: "It's like a court case: You may not have eyewitnesses, but you have circumstantial evidence, and it keeps on mounting, and all of it points to what we have been doing -- and that's humans ejecting greenhouse gases into the atmosphere."