As the British meat market faces yet another crisis, experts at home assess the risk of foot-and-mouth disease in the U.S. 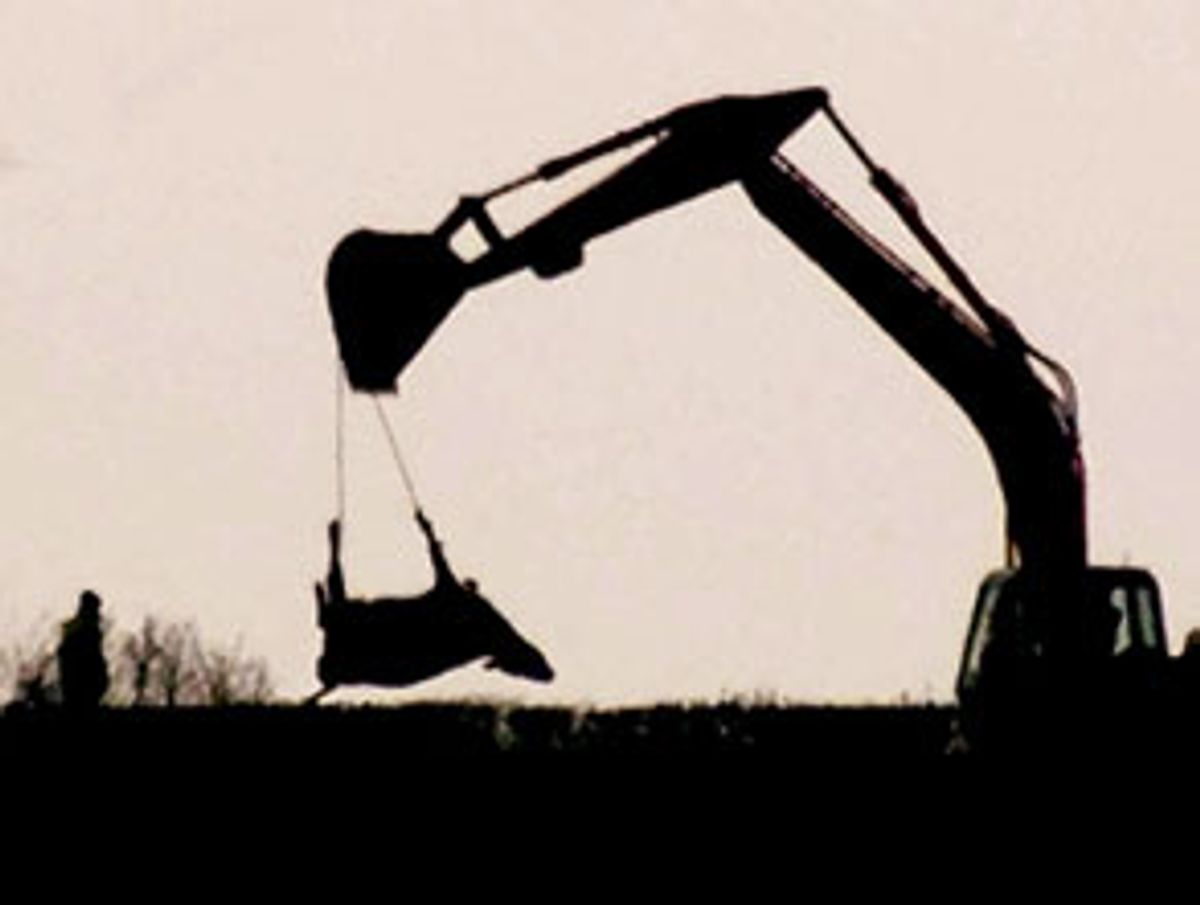 As the foot-and-mouth outbreak fans across England, Scotland and Northern Ireland, European officials are imposing drastic measures to keep the disease from spreading. Dublin's St. Patrick's Day parade has been canceled, as have livestock shows in Spain. British travelers arriving in Portugal and those crossing the border into the Irish Republic are required to disinfect their shoes. And poor Dolly the sheep, the international pinup model for animal cloning, has been quarantined. And this is all against a backdrop of a sky clouded with the smoke from pyres on farms, where thousands of animal carcasses are being burned.

"The economic impact of this is going to be horrendous," says Dean Cliver, professor of food safety at the University of California at Davis and a member of the FDA's transmissible spongiform encephalopathies advisory committee. "Especially superimposed on the problems they had to face in the aftermath of the mad cow thing, this is going to be a big, big blow to the economy in England." Already, 37,000 animals are being killed, and that number could rise to 67,000. But so far only 40 animals have been documented as actually having the disease.

Indeed, the main fear with foot-and-mouth disease (FMD), besides the welfare of the animals, is financial. British farmers, barely recovering from the mad cow epidemic, may lose up to $73 million just on this weeklong ban of livestock, and even more if it continues. And animal health officials in the United States say if it ever reached this continent, it could significantly damage the $4.2 billion-a-year meat industry. Many countries halt importation of meat from countries where even a single case of FMD has been reported for at least a year.

Foot-and-mouth disease is among the most contagious of animal viruses. All cases in the U.K. can reportedly be linked to an outbreak at a single farm in Northumberland, England. Fortunately, unlike mad cow disease, FMD does not pose a risk for humans. But it is extremely virulent, and can be spread by almost anything -- from cars, clothing, shoes and even, possibly, the wind. That's why it can move through a continent like Europe and cause an infectious domino effect on countries there; it's also why France and Ireland are particularly concerned about the disease's possible infiltration and are taking extra precautions to keep it out. One farm in Ireland was quarantined because it was merely suspected that the animals had been in contact with sick animals at a farm in Northern Ireland.

Although it is rarely fatal to an adult animal, veterinarians say FMD is extremely painful and it can cause blisters on the tongue, muzzle, teats or feet of cloven-hooved animals like deer, pigs, cattle, goats and sheep, as well as spiking a fever. As the disease progresses, the skin of the tongue or feet can peel right off, making it excruciatingly painful for infected animals to eat, swallow or walk. FMD has a short incubation period -- symptoms usually show up within a few days -- so if an animal is quarantined for a week, and there are no telltale signs, chances are the disease is not present. Diseased animals rarely produce as much milk as they did before coming down with the condition. Though the cloven-hooved can eventually recover from the virus, the only way health officials believe they can control the disease is through eradication. And that has set the stage for mass slayings of cattle and other livestock across Britain. Many of the animals have not even been infected; they were merely exposed to foot-and-mouth.

The last case of foot-and-mouth disease on American soil was documented 72 years ago. Still, the recent outbreak in Europe has put American animal health officials on alert. "Foot and mouth is an old threat and has been of great concern for many years," says Dr. James Roth, professor of immunology at Iowa State University's College of Veterinary Medicine. "Having it present in England increases the threat a little bit. England has all the safeguards that we have in place and it got in there. We have to be aware that it could get in here. I think there's a need to increase investment in prevention and detection."

The disease has been particularly active in the last few years, moving through countries in Asia, South America and Europe. It has also been detected in the Middle East and Africa. And as countries in these areas have learned, no place -- with even the best regulatory systems -- is immune. Foot-and-mouth disease showed up in Japan last year, even though it hadn't been present since 1908, and also in Korea, where it hadn't been seen for almost as long. The 1997 outbreak in Taiwan dealt a crippling blow to that country's meat industry, destroying its pig population and causing billions in estimated damages. Taiwain's meat industry still hasn't fully recovered.

But veterinarians say the United States may be less at risk because of bans already in place on all imported ruminants from the European Union. The U.S. banned ruminant imports from the United Kingdom in 1989 and the E.U. in 1997, following outbreaks of mad cow disease.

"We're monitoring the situation in the E.U. and basically we have very strict regulations in place to protect us from foot-and-mouth disease," says Kim Smith, spokeswoman for the United States Department of Agriculture's Animal and Plant Health Inspection Service (APHIS). "While it's a concern, it's not an extraordinary concern because our safeguarding measures are excellent," she says.

In light of the British outbreak, the Department of Agriculture is asking ranchers to continue surveillance of animals to make sure that there are no signs of FMD in their herds. In Texas, on Wednesday, government officials urged livestock producers to step up observation procedures and to take extra precautionary hygienic measures, which include wiping off shoes with disinfectant and making sure that wastefood fed to swine is properly cooked. The state's chief veterinarian also issued a warning to farmers: "If your livestock become lame or develop blisters or sores, call us ... Our emergency response within the first 24 hours after the first signs of disease will affect our outcome over the next six months."

Veterinarians and animal health officials believe that the growing international livestock trade is partly to blame for FMD's resurgence. The outbreak of diseases like FMD can also highlight the dangers of free-trade and open-border agreements like those found in the European Union. "For the time being, [E.U.] commerce has gotten ahead of public health," says Cliver. "This stuff moves around much more quickly than it used to, and some of it is stuff that has infectious disease agents in it."

Although a vaccine exists, it's difficult to immunize animals against the virus since seven sero-types of FMD exist, along with dozens of subtypes. Many times an animal will be given a vaccine that doesn't protect it from other strains. Also, since it's difficult to tell if an animal has the disease or is only vaccinated, many countries like the U.S. don't import meat from places where vaccines are administered.

In the United States, there is only one place where the highly infectious foreign disease is researched. And that's Plum Island, off the northeastern tip of Long Island, N.Y., where researchers are standing by in case infectious agents not present in the U.S. somehow make their way in. Of the 15 highly contagious diseases listed by the Office International Des Epizooties (World Organization for Animal Health), only three are present in the United States: bluetongue (a sheep and cattle virus disease), vesicular stomatitis (in cattle and horses) and New Castle disease (a viral poultry disease).

Marvin Grubman, a virologist who works with FMD, explains all the precautions he and the other researchers take just in order to work with the virus. They commute out every morning to the island, change into protective gear, and then shower before leaving. Since U.S. regulations prohibit the manufacture of the vaccine, the entire U.S. supply is imported. (Outbreaks in Europe have occurred in the past because the virus escaped out of the high-containment facilities where the vaccines were being manufactured.)

Grubman and his colleagues are working on developing a new vaccine that would be safer to produce and would produce immunity more quickly in animals. "We find that it can protect animals after they are vaccinated once; and when they are exposed, we can protect them from developing clinical signs of the disease," says Grubman. "It seems to be working on a small scale." The new vaccine also allows them to tell whether an animal is infected with the virus or has merely has been vaccinated. But still, Grubman says, any new and improved vaccine that could be used in case an outbreak occurs in the United States is probably several years away. If foot-and-mouth disease did make its way here, the United States would probably adopt the same disease eradication approach currently being used in the United Kingdom: the mass slaughter of animals, infected and uninfected.