A new book says men have become obsessed with their bodies, but does the rise of hair grafts and penis-enlargement surgery really spell the end of civilization? 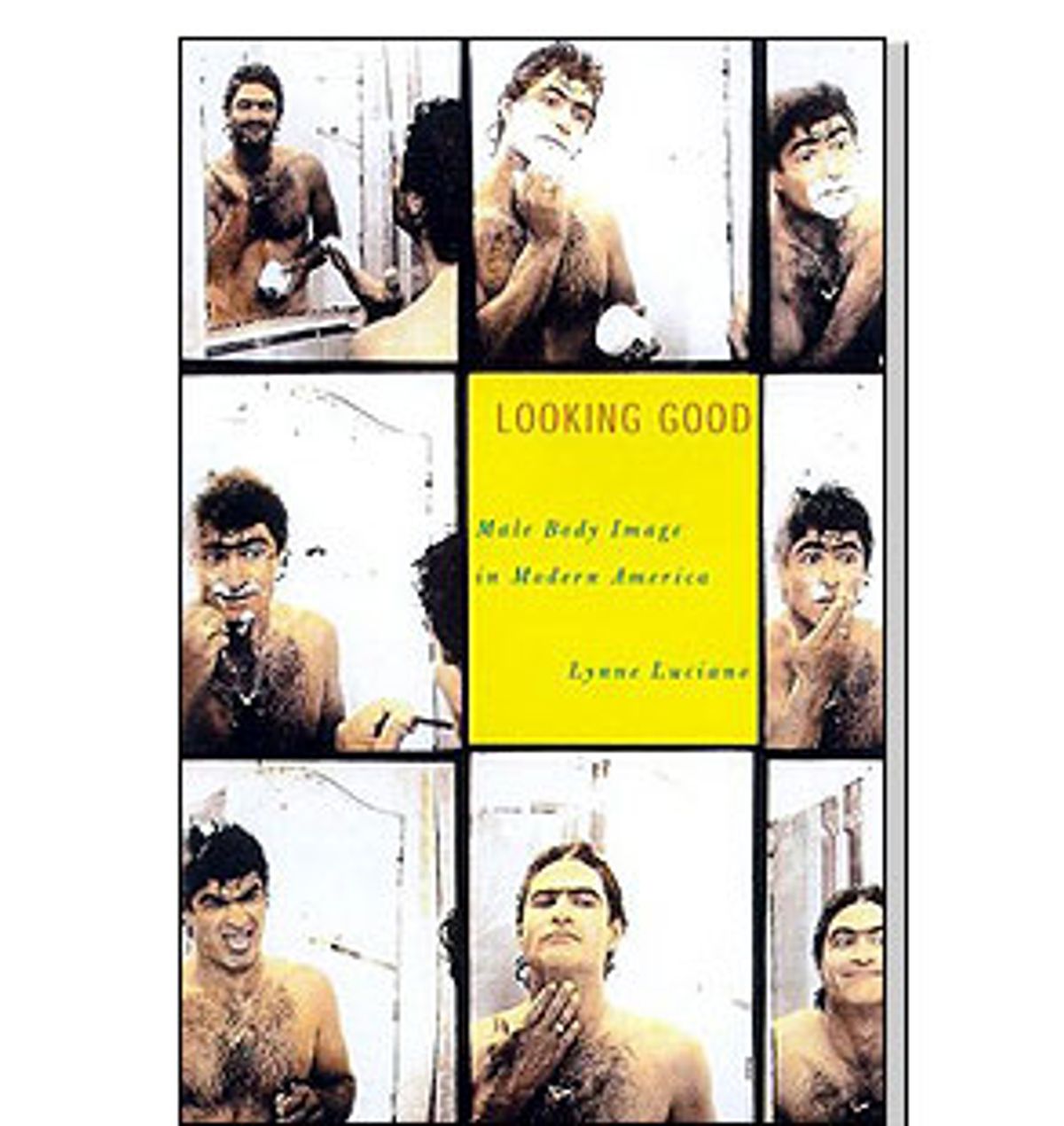 The other night, while watching a VH1 homage to the '90s, I caught George Michael's video "Freedom 90," featuring the sexy lip-synching and face-caressing of Naomi Campbell, Linda Evangelista, Christy Turlington and Cindy Crawford. I was jolted back to a time when supermodels ruled the image industry, before Gwyneth Paltrow & Co. hip-checked those alien creatures off the cover of Vogue.

Now, we're witnessing the ascent of the male model. We gaze regularly at Marcus Schenkenberg, Tyson Beckford and plenty of other men who glare sullenly into a loving lens. As Susan Bordo noted in last year's "The Male Body," things changed once Calvin Klein embraced the seductive power of the gay aesthetic. In one polished, um, package, Klein's manly mannequins came to embody three American ideals: They were buff, they were masculine and they were pretty.

That last detail -- pretty -- seems to have inspired Lynne Luciano's "Looking Good: Male Body Image in Modern America." When did men get pretty, and how on earth did that ever become OK?

The male half of the species now spends upward of $3 billion a year on looking good. Trying to account for the rise of nose jobs, steroids and bulimia among American men, Luciano, an assistant professor of history at California State University at Dominguez Hills, delves into four realms of male narcissism: hair, cosmetic surgery, bodybuilding and sexual dysfunction. While her decade-by-decade format dries out halfway through the '70s, Luciano does comprehensively chronicle the evolution of male vanity, from the white-collar conformity of the '50s to the surgery-altered chins, grafted hair, overblown pecs and fat-injected penises of '90s men.

Modern American culture isn't entirely to blame, Luciano assures us -- Julius Caesar and Hippocrates obsessed over their hair, too. However, according to Luciano, the Cold War gave rise to a national preoccupation with physical indicators of dominance; both Eisenhower and Kennedy believed that a fit populace meant a stronger stand against Communism. A new magazine called Playboy, packed with crafty advertisers, encouraged young men to put off assuming the breadwinner role for a more selfish swingin' singles life, which meant spending more time and money on youth-preserving activities and products. Then, self-searching '60s kids morphed into Reagan-era yuppies, "an estimated 4 million young Americans who, with their MBA's, BMWs, and IPOs, became models of selfishness, consumerism and obsessive ambition." (Phew! Thank God that was just an '80s thing!) Men, longtime captives of the competitive "locker room syndrome," found themselves awash in a sea of products that promised "they would never have to feel inadequate again."

By the mid '90s, the bill for male cosmetic surgery had reached $500 million, while hair transplants accounted for another $800 million. One million males have eating disorders. When men go running, Luciano says, some of them run "compulsively." Men also use steroids, get their penises lengthened and get pec implants. After all, Barbie isn't the only one with outrageous body proportions; it takes a lot to look like G.I. Joe.

As Luciano explains, "the traditional image of women as sexual objects has simply expanded: everyone has become an object to be seen." In fact, part of the problem for men is that decorating and enhancing has always been the prerogative of women. Luciano points out (and, of course, Susan Bordo and Susan Faludi, among others, have beaten her to the punch) that feminism created new pressures and anxiety for American men. Women now have their own money, they get married later and they ask for divorces. Men, in turn, feel they must do more than merely acquire success: They must radiate the image of success.

"Looking Good" takes on a topic that's messy and complicated, despite its glossy surface. But Luciano never really gets her hands dirty. The book's stiff format and her overly methodical writing style are in the way of a fully fleshed-out discussion. And there are strange omissions -- where, for example, are our Latino and black men in all of this? Even Luciano's analysis of the problem works under some tired assumptions and stereotypes. She seems convinced that the relentless pursuit of the American dream of "having it all" has led Americans to sell their souls, favoring beauty over character and forgoing civic life in order to spend more time on self-improvement. But is it really fair to say that Americans don't care about their inner selves or their communities simply because some of them fret over their flabby behinds? Just how morally weak are we for wanting to improve our appearance?

"We spend more money on fitness and cosmetics than on education or social services," Luciano writes. That's possibly because looking good makes Americans feel better about themselves. This is a startling idea -- that Americans think making themselves beautiful is a remedy for their mental and emotional woes -- but Luciano lets it linger there, deprived of its complexity.

In the end, there may be something inevitable, and necessary, about the way men and women are trying on each other's roles for size. If that means that our ideas of what masculine bodies should look like are changing, then perhaps we shouldn't be too worried. Chances are that men, too, will soon discover that frantically chasing down a dreamlike image of themselves will only leave them tired, and looking that way, too.