Time for another veep watch?

Cheney's troubled ticker has some suggesting he step aside -- but who would get the nod? 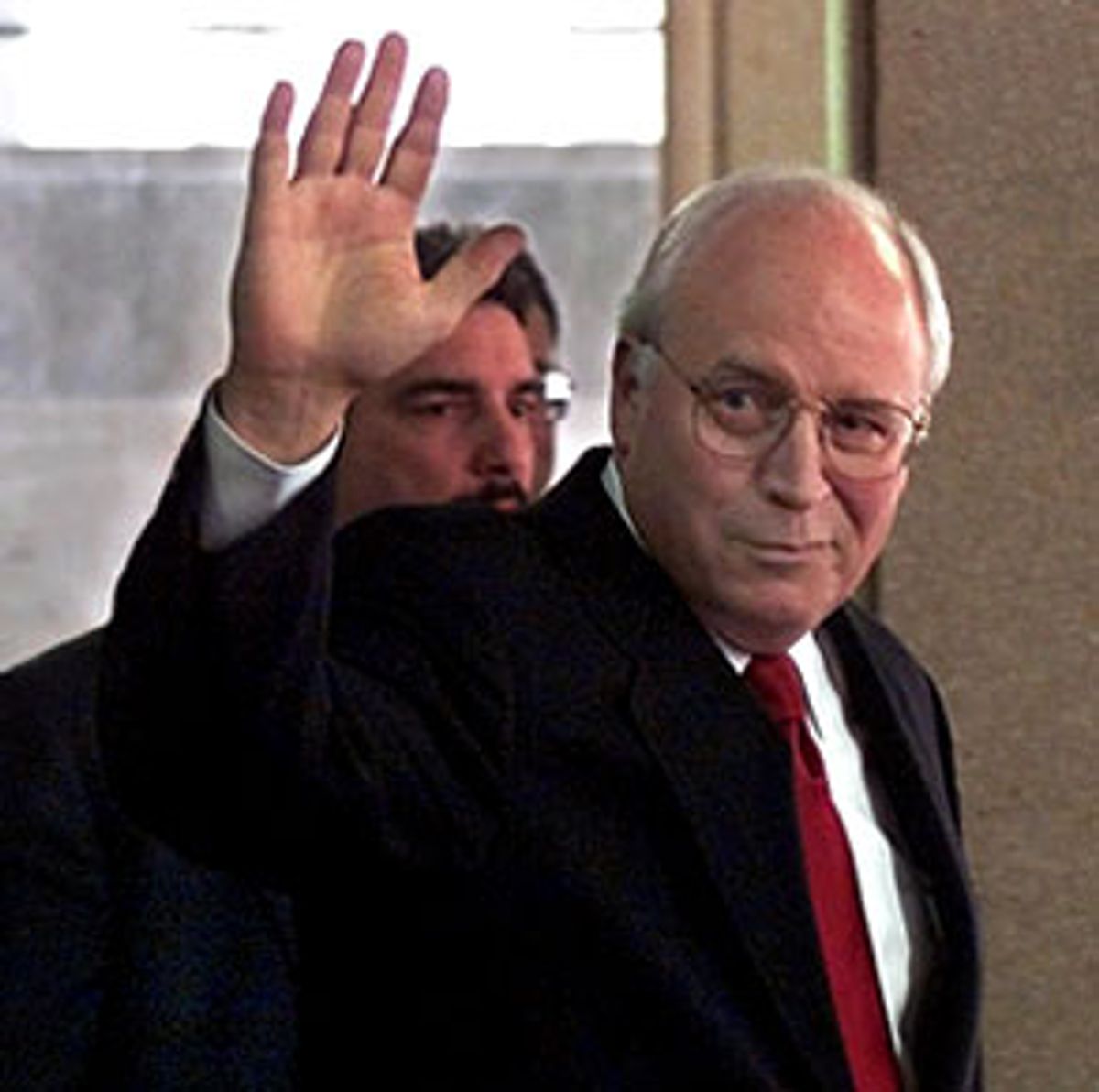 As Vice President Dick Cheney returned home Tuesday from the hospital after yet another treatment for his heart disease, speculation moved from what exactly is wrong with him to whether the 60-year-old vice president will be able to serve out his term -- and whom President George W. Bush might pick to replace him.

Larry Sabato, a professor of political science at the University of Virginia, says politics would play a key role in determining a successor to Cheney. "Given that that's the case and how close the election was, it seems to me that the overriding calculus for Bush is to find someone who could win a big state or a segment of the electorate that could push him beyond the 50 percent mark in subsequent elections," he said. "That immediately leads you to Colin Powell and Tom Ridge."

Sabato said the raw political calculation would favor Powell. "Suppose Bush could finally crack the toughest nut of his presidency -- the African-American vote, which is deeply suspicious of him -- by doing something the Democrats have never done. All he needs is 20 percent of the African-American vote and the Democrats can't win. He could lose it 80-20 [in the black vote] and make it impossible for the Democrats to win. Powell gives him the opening that he would never have otherwise."

All this speculation, while of course premature, does raise interesting points about the politics of appointing a vice president as opposed to choosing a running mate. During the presidential campaign, both Powell and Ridge received their share of veep speculation. Powell was reportedly offered the spot, but turned it down, citing his wife's reluctance to have him campaigning on a national ticket. Of course, those rigors would be avoided if Cheney were to resign, and Bush could simply appoint Powell to the No. 2 slot.

Ridge, meanwhile, is a decorated war hero, fellow governor and a close friend of Bush's. His name was floated frequently during last summer's season of speculation. But Bush advisors worried that, as a supporter of abortion rights, Ridge would not go over well with the staunchly anti-abortion Republican base. Again, those problems would be avoided if Bush were to simply appoint Ridge.

But Congress has exercised some muscle in such proceedings before. The 25th Amendment of the Constitution stipulates that any vice presidential appointee would have to be approved by a majority of both houses of Congress. When President Richard Nixon settled on Gerald Ford to replace Spiro Agnew after Agnew's resignation, Congress gave Ford a close going over, even though he was one of their own. When he assumed the presidency after Nixon's resignation, Ford had to cut a deal with conservative Republicans, promising to dump his veep nominee, Nelson Rockefeller, in exchange for support of his confirmation. Rockefeller was ultimately approved, but Ford dumped him in the 1976 campaign in favor of Bob Dole.

"Ford was very popular in the Congress, even though it was Democratic in both houses. But they gave him a going over that lasted a couple of months -- but it was clean and easy, all things considered," Sabato said.

In his Slate column, Timothy Noah also picks Ridge as Bush's new No. 2, but says he would be a very different type of vice president than Cheney, whose unparalleled power in the Bush White House has led him to be called a shadow president by some. "Ridge isn't shadow president material," Noah writes. That role, Noah says, would ultimately fall to Secretary of Defense Donald Rumsfeld.

The rest of the public speculation took place largely on anonymous Internet forums -- even on those dominated by conservatives. On Free Republic, some said it may be time for Cheney to pack it in. "The guy's heart is a time bomb, face it," one Freeper wrote. Another added: "As much as I truly admire and respect Mr. Cheney, I think that we ought to give the man a rest, and maybe choose another vice president. Mr. Cheney can always be there to guide and advise, but maybe the pressure shouldn't be that great on him. After all, he will serve the country a lot better if he is alive and healthy, than dead! God bless you Mr. Cheney." On Lucianne.com, one person posted, "As much as I love Dick Cheney -- he is replaceable if necessary."

But everywhere else, the conversation stayed polite, as Cheney returned home to rest. His aides said he spent the day helping his wife unpack a few boxes around the house, and having an afternoon tea with the first lady. Sounds like a day more indicative of vice presidents past.