The convicted cop killer fires his lawyers after one complains that a "fringe element" in the movement to free him is hurting the cause. 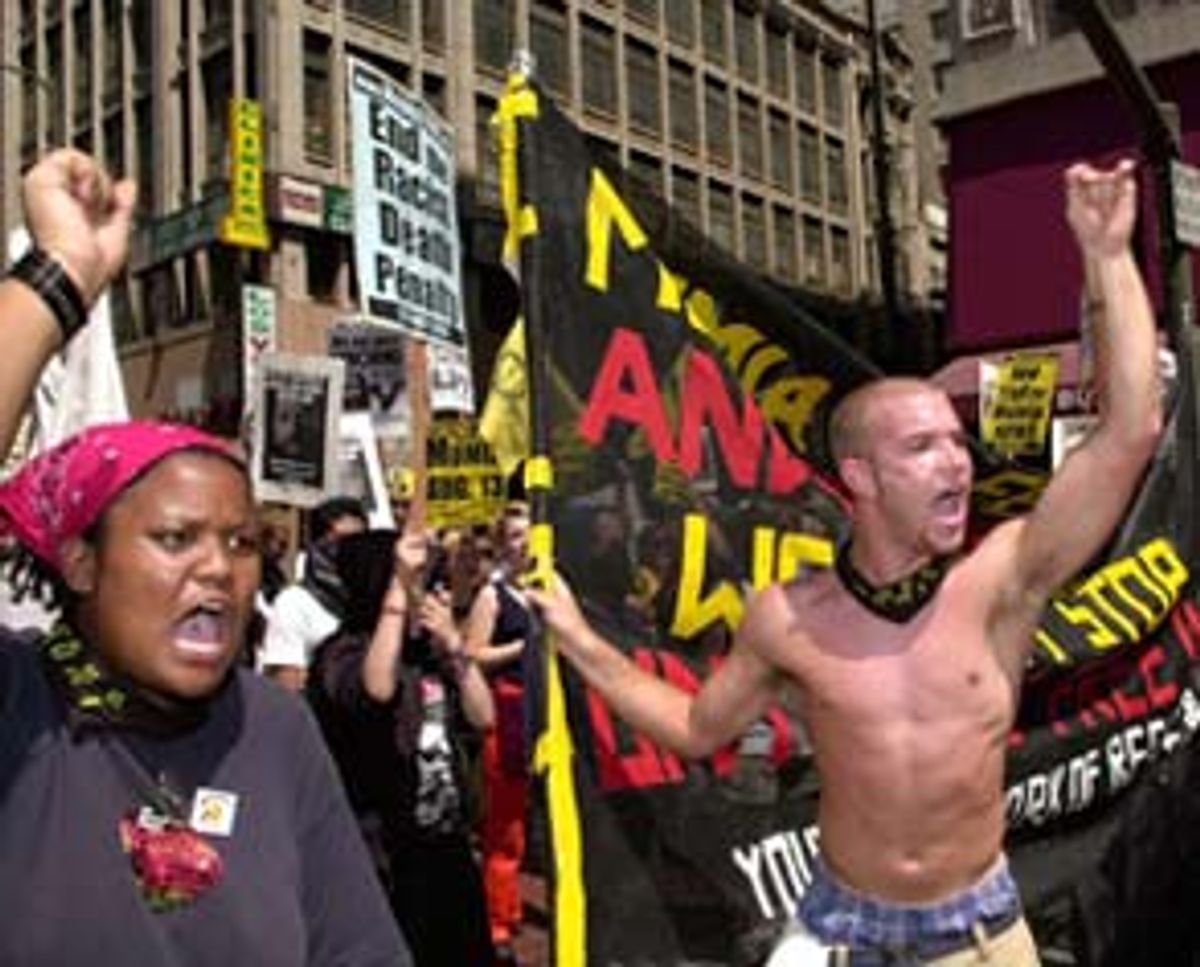 In a stunning turn of events in the decades-old case of convicted cop killer and black Philadelphia journalist Mumia Abu-Jamal, the death-row inmate has fired his entire legal team. The change came following word that one of Mumia's lawyers, Dan Williams, is about to publish an inside account of the case, its fractious defense team and a "fringe element" in Abu-Jamal's worldwide network of supporters that the attorney says is undermining attempts to gain his client a new trial.

Abu-Jamal, who is currently in solitary confinement in Pennsylvania's maximum-security SCI-Green prison, last week fired off a pencil-and-paper legal brief to the judge, William H. Yohn Jr., asking permission to dump Williams along with lead counsel Leonard Weinglass and several supporting attorneys on the case. The internationally known convict, who is in prison for the 1981 killing of white Philadelphia police officer Daniel Faulkner, contends that Williams' book, "Executing Justice: An Inside Account of the Mumia Abu-Jamal Case," to be published in April by St. Martin's Press, breaches the lawyer-client relationship and violates legal ethics. Abu-Jamal also asked for a delay in the scheduling of any hearing on his pending habeas corpus appeal, to allow his new, and as yet undetermined, defense team to get up to speed on the complex case.

Williams, who says he "continues to believe that Mumia is innocent and, most importantly, has never been given a meaningful opportunity to refute the prosecution's flawed case against him," insists that there has been no violation of ethics and no breach of confidence with his client. "Everything in this book was already on the public record," he says, adding that his detailed accounts of disputes and conversations among defense attorneys were all gathered where other people -- usually members of the Abu-Jamal support network -- were present. He also insists that Abu-Jamal long knew of Williams' plans to write a book about the case.

"I provided to Mumia, through his agent, a detailed synopsis of each chapter before I wrote the book," Williams says. "There is nothing in this book that violates legal ethics."

But there is plenty for some of Abu-Jamal's most ardent and vocal supporters to take issue with. Williams says certain Mumia backers set back both the legal and public relations efforts by trying to depict Abu-Jamal as the victim of a grand law-enforcement conspiracy, rather than concentrating on the effort to prove he was wrongly convicted of first-degree murder in Faulkner's death.

In "Executing Justice," Williams takes readers through the original 1982 trial in which a jury of two blacks and 10 whites convicted Abu-Jamal of first-degree murder and sentenced him to death. And he describes a 1995 rehearing of the facts in the case, at which serious questions were raised about the integrity of earlier prosecution witnesses. Williams argues there is good reason to believe Abu-Jamal did not fire the first shot back in 1981, as claimed by the prosecution. Instead, he says the evidence suggests Faulkner shot Jamal in the chest first, before being shot fatally himself. While Williams favors a scenario that has someone else firing the fatal shot that killed the officer, he seems to suggest that this is less important than proving that Abu-Jamal was not the coldblooded assassin the prosecution made him out to be. His view is that it would be much easier to overturn Abu-Jamal's death sentence, and even his first-degree murder conviction, than to have him declared innocent.

Williams then attacks key Abu-Jamal supporters -- including MOVE, the controversial Philadelphia-based political and back-to-nature group that has been backing Abu-Jamal since his initial trial, and the lawyers from the Trotskyist Partisan Defense Committee (PDC) -- who have claimed there exists a grand conspiracy to kill Abu-Jamal, even predating Faulkner's shooting in 1981, through his time on death row today. Those conspiracy advocates, who have seen the hand of everything from the FBI to Abu-Jamal's original attorney, Anthony E. Jackson, behind his conviction, fatally weakened his case, Williams argues.

The attorney writes of behind-the-scenes struggles to keep several witnesses promoted by PDC attorneys Rachel Wolkenstein and Jon Piper off the stand during the 1995 rehearing, for instance, because they felt that their testimony was unbelievable and would undermine other more credible witnesses. The witnesses ended up testifying, only to be torn apart under cross-examination by the prosecution attorneys, Williams says.

Later, he claims, Wolkenstein and Piper tried to convince him and Weinglass they had a new witness who could show that Faulkner had been the victim of a police-arranged mob hit, made to look like Abu-Jamal's doing. When Weinglass and Williams rejected this theory, and did not include it in their habeas corpus appeal, the two PDC lawyers quit the case. Williams says he was "enraged, convinced that bona fide lunacy had set in," at a meeting where the pair described their "new witness." Efforts to talk with Wolkenstein about Williams' account of the defense split were unsuccessful.

Asked why he chose to publish such a controversial book in the midst of Abu-Jamal's critical habeas appeal, Williams says he was driven by a sense that the case has been moving again in the wrong direction. "This case had and still has the promise and potential to be a powerful referendum on what is wrong with capital punishment and the criminal justice system," says Williams. "But it hasn't lived up to that potential because a small fringe element has taken control over the movement, and that has resulted in Mumia's case being, in many people's view, an oddity on the fringe of the extreme left wing of our society. In essence it's been marginalized."

He says that by laying out the argument for a new trial, and demonstrating what he sees as solid grounds for arguing Abu-Jamal's innocence of the first-degree murder charge that put him on death row, he hopes "to make the case relevant again, to redirect the debate onto a rational plane."

But Weinglass, who says he first saw the manuscript of "Executing Justice" on Feb. 20, and who notified Abu-Jamal of it as soon as he had finished reading it two days later, had harsh words for his younger protégé and colleague.

"I don't think this book does any legal damage to the case," says Weinglass. "But I do think that it's done political damage to the unity of the support organization. I don't agree with Dan's analysis that Mumia's case has been marginalized, and I don't think that it's the place for a lawyer in a political case to be criticizing and evaluating the value of a support network." Weinglass adds, "He should have shown the manuscript to me and to Mumia before he sent it to the publisher."

Others in Abu-Jamal's support network, which in recent years has come to span the globe, are even more blunt in their criticism of Williams.

In a statement released last Friday, Refuse and Resist, which has helped organize international support for Abu-Jamal, said, "We think it was a serious mistake for Dan Williams to publish such a book, even if written with the best of intentions, without consulting Mumia."

Pam Africa, a spokeswoman for MOVE, says, "Dan Williams was absolutely wrong in writing that book." As to the decision by Abu-Jamal to seek to dump not just Williams but his entire legal team, Africa says, "We support what Mumia is doing. If he wants the whole team gone, he's the one who's on death row."

That said, the disruption caused by a change in legal representation at this point, in the midst of what is effectively Abu-Jamal's last shot at a new trial, could be a serious blow to his efforts to overturn his death-penalty conviction. "I think the book is a jewel," says noted defense attorney Martin Garbus. "It answers a lot of questions people have had about this case and it has convinced me of Mumia's innocence. And the firing of Williams and the defense team is unfortunate. But the firing of Len Weinglass, who had nothing to do with the book, is tragic. Weinglass is one of the best lawyers in the country, and by firing him, Mumia is doing himself a terrible disservice."

Weinglass, for his part, says he remains available to his client. "Of course I'm willing to do anything and everything that's asked of me for Mumia," he says. Those who have been pushing for Abu-Jamal's execution, including the Fraternal Order of Police and the slain officer's widow, Maureen Faulkner, are already jumping into the fray caused by the publication of Williams' book. In a statement last week, Faulkner said Abu-Jamal's decision to fire his attorneys was "making a charade out of the legal process." She called the move "just another in a long line of transparent, offbeat legal ploys employed by a guilty man who hopes to disrupt and prolong the appeal process."

"We're optimistic that this is a sign the deck chairs are being rearranged on the Titanic," adds Michael A. Smerconish, a Philadelphia attorney who represents an organization called Justice for Police Officer Daniel Faulkner.

It remains possible that Weinglass could stay on as lead counsel. Significantly, critics of Williams in the Free Mumia movement at large, and Abu-Jamal himself, have been silent about Weinglass.

In any event, the decision on how to respond to Abu-Jamal's request to sack his legal team is up to Judge Yohn, an appointee of former President George Bush who has jurisdiction over the former Black Panther's case while his habeas corpus petition is being considered.

Said one lawyer familiar with the case, "Judge Yohn has a lot of options. He could let Mumia drop everyone and hire new counsel, or he could just let him drop Williams. If Mumia were to come up with new attorneys who were ready to go into a hearing next week, he'd probably let him drop his old attorneys. But if he says he needs a year to get his new team ready, the judge might say no, you can't let them go."