"Enemy at the Gates"

How much of this thrilling face-off between Germans and Russians is true? If it's this good, who cares? 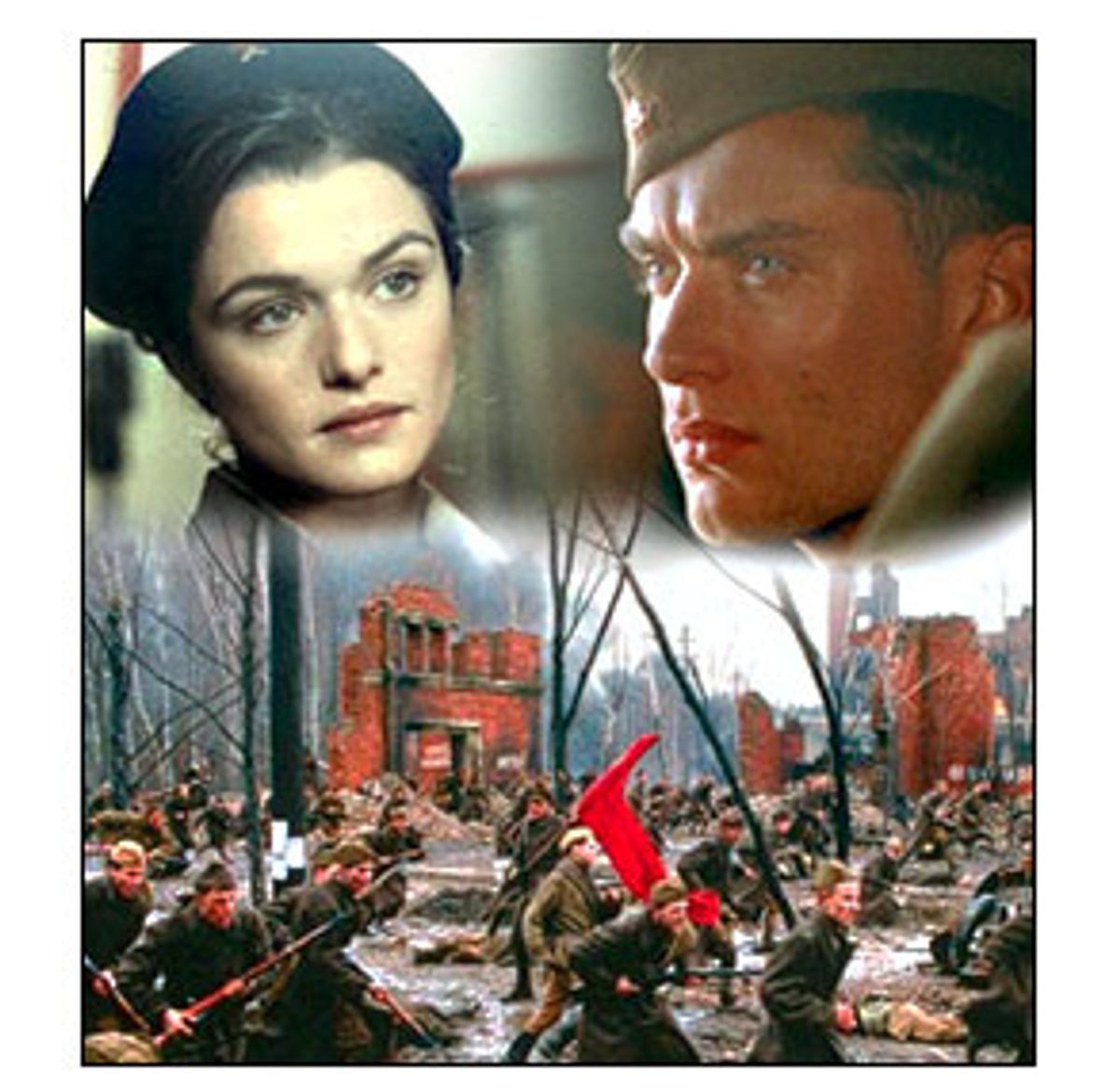 Will American audiences sit still for a grimy epic about a group of sharpshooters in a ruined city on the Volga, fighting for the survival of the Soviet motherland and the greater glory of their leader, one Joseph Vissarionovich Stalin? Maybe so, if it's as gripping as "Enemy at the Gates," Jean-Jacques Annaud's meticulously constructed fantasy about Vassili Zaitsev, hero of the battle of Stalingrad, and his legendary duel with the German officer sent to kill him. I think it's fair to call this film a fantasy, despite all its convincing blood and mire and its roots in real people and real history, because the question of whether Annaud depicts the decisive siege of Stalingrad accurately is ultimately beside the point.

Like all of this peculiar director's movies (which include "Quest for Fire" and "Seven Years in Tibet"), "Enemy at the Gates" establishes its own mythic realm, full of grandiose themes and powerful images. For once, Annaud has chosen a story big enough and stark enough to stand up to this treatment, and the result is a tense and artful war film that works both as thrilling spectacle and as intimate drama.

Did the real Zaitsev -- a shepherd boy from the Ural Mountains who became the greatest Soviet hero of World War II, a proletarian Paul Revere -- possess the dreamboat Anglo-Saxon features of Jude Law? Well, no; historical photographs show a grinning, broad-faced Russian with a flattened nose and protuberant ears. But the symbolic narrative Annaud constructs here, as fictional in its way as any Soviet propaganda film, demands a beautiful hero, an untrustworthy sidekick and a dark-hearted but not ignoble villain. So he gives us all these things in turn.

Annaud has never been big on subtlety, and any film that opens with a narrator intoning, "Autumn 1942. Europe lies crushed beneath the Nazi jackboot," while a black swastika ink stain spreads across a cartoon map, is treacherously close to self-parody. Actually, that's not even the beginning. We've already had the opening credits, in that fake-Cyrillic typeface meant to suggest Russian (at least the R's are not backward), followed by a brief, awkward scene of the young Vassili being taught to shoot wolves by his rheumy granddad. (Even in the official Soviet version of the Zaitsev legend, his childhood targets were deer, not wolves.) If it's beginning to feel like a long evening, that's Annaud; he's only made nine movies in 25 years, and in most of them he seems to spend half his time trying to drive viewers away.

As if snapping out of its stupor, "Enemy of the Gates" then flings the grown-up Zaitsev (Law), a raw Red Army recruit, into a horrific opening battle that rivals the D-day invasion in Steven Spielberg's "Saving Private Ryan" for gore and intensity. Under personal orders from Stalin to stem the German tide at his namesake city, Soviet commanders are desperately, hysterically flinging ill-prepared troops across the Volga into the hopeless battle, terrorizing them en route and shooting them if they try to retreat. Filmed using a combination of digital effects and a replica Stalingrad built in rural Germany, "Enemy at the Gates" is stunning as spectacle and sharply disorienting as narrative. Clearly our only choice is to root for the Russians against the Nazi invaders, but from the outset the Reds seem cruel, cowardly, all but defeated.

Surviving the slaughter through guile and sheer luck, Zaitsev saves the life of a political commissar named Danilov (Joseph Fiennes) and polishes off five Germans, one of them a senior officer taking a shower, with five bullets. Sensing a propaganda opportunity, and a chance for personal advancement, Danilov puts Zaitsev and his exploits on the front page of the army newspaper. The young sharpshooter becomes an example to the troops and a hero to the entire nation. Daily the list of his Nazi kills grows into the dozens. Danilov's boss, no less a personage than Nikita Khrushchev (Bob Hoskins at his growliest and best), is well pleased. The big boss in the Kremlin himself, whom we see only in godlike floor-to-ceiling paintings, is said to have his eyes on our shepherd-sniper.

Annaud, who co-wrote the screenplay with Alain Godard, never directly engages the question of how much of the Zaitsev legend is true. (He was clearly among the snipers who held off the Germans at Stalingrad for months, but whether he really killed hundreds of enemy troops is lost in the fog of Soviet history.) I'm not sure if this is cleverness or clumsiness in the end, but Annaud wants to have his war and win it too, to paint Zaitsev as a dashing and virile hero with one hand and suggest that he may have been a phony (through no fault of his own) with the other. In some ways, "Enemy at the Gates" seems like a tale of the Soviet Union told by Ayn Rand: It was the idea of an indomitable hero, rather than the potentially troublesome facts, that rallied the Red troops and lent a temporary air of nobility to the tyrannical Stalinist regime.

Even with his boarding-school English accent, Law plays Zaitsev with a kind of poster-child erotic simplicity that suits Annaud's strange scheme perfectly. Although Fiennes gets top billing based on his "Shakespeare in Love" stardom, Danilov is a thankless and finally not significant role, a Dr. Frankenstein who is dwarfed by his creation and loses his girl (the sultry Rachel Weisz) to him. Although this romance is largely gratuitous, it does offer a sex scene in a crowded barracks that's so vivid you can virtually smell the rank piles of sleeping bodies around Law and Weisz. Annaud is not known as an expert handler of actors, but the enormous supporting cast features several eloquent performances, including Ron Perlman as a cynical fellow sniper and Gabriel Marshall-Thomson as a small boy who idolizes Zaitsev with disastrous results.

If anything, the latter portions of the film, though just as thrilling as the beginning, take us still further into stripped-down myth, as Zaitsev and his nemesis, a German officer named König (Ed Harris), stalk each other through Stalingrad's abandoned factories and looted stores. Again, many historians now presume the tale of Zaitsev's duel with a Nazi aristocrat to be fiction, but for Annaud it's the fiction that counts. These are adversaries out of Homeric legend or a John Ford western, men somehow greater than the societies that created them.

At first glance, Harris seems like a ludicrous choice to play a German; what actor could possibly be more consummately American in accent and manner? But as the almost honorable König, who may kill small children but genuinely regrets it, Harris provides an air of integrity, ambition and even sadness that is somehow just right. Throughout this oddly memorable film, which may baffle American audiences but surely won't bore them, the choices are big, brave, complicated, interesting. This is spectacle cinema made with individual flair; maybe someone in Hollywood will notice that it's still possible.