You gotta know when to hold 'em

My son is a 5-year-old cardsharp. Poker is his game. 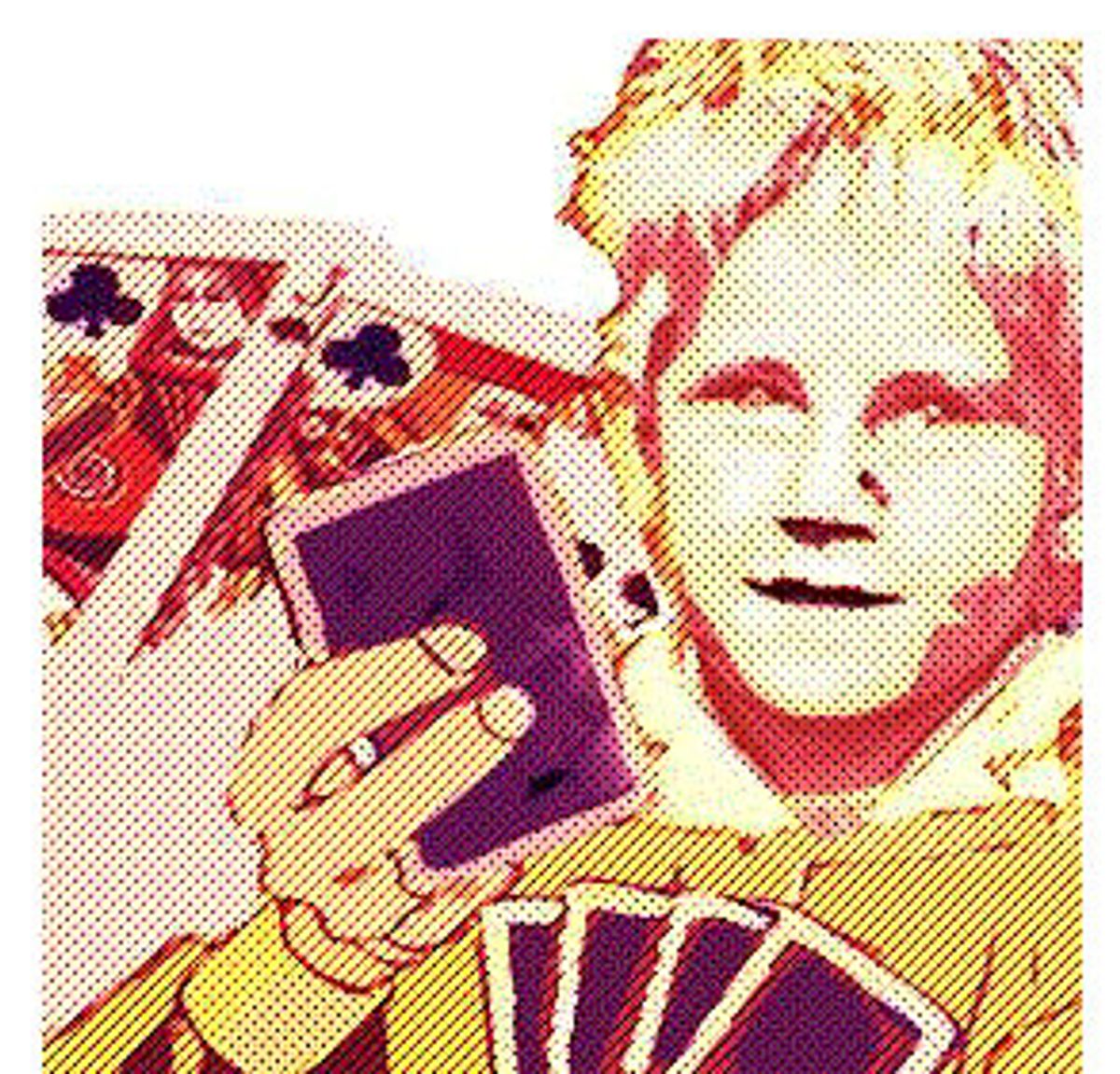 I hesitated when my son asked me to teach him the venerable game of poker. First, there was the ethical dilemma: We live in the Bible Belt, where card playing of any kind is considered a sin. And then there were my serious doubts about the ability of a 5-year-old to "get it."

The last thing I needed was to raise Hunter's frustration level. He was bored, stuck at home with bronchitis, and we had long since exhausted the possibilities of Go Fish. So what was a mother to do? Risk both our souls and Hunter's burgeoning self-esteem, on the off chance a new game might distract him for a time?

After three housebound days, it seemed worth the gamble.

I dug up an old pack of Bicycles and began with the basics: face values and suits, followed by the hand ranks, from a pair to five of a kind. (We were playing five-card draw with jokers wild -- children being naturally drawn to the notion of a card that can be anything.)

Here at least I got to justify my dubious morals and lack of fitness as a parent with a disquisition on probability theory, and Hunter intuitively grasped that the least likely combinations should be worth the most "points."

We were ready for action. I helped him play a few hands, patiently explaining why he should keep some cards and discard others. That was it. I cut him loose and, with some beginner's luck, he was soon beating the crap out of his mother, who up to this point had thought she wasn't a half-bad player.

As his streak wore on (and on), I found myself sneaking peeks at his discards, trying to figure out if blind fortune was at work here, or some more surprising principle.

I clearly needn't have worried about a 5-year-old getting it! After one simple lesson, Hunter was going for straights and saying things like "Show me your cards" with authority. I could picture him sitting in a booster chair at a felt-covered table in some smoky backroom, a bubble-gum cigar dangling from those plump, babyish lips, winning chips from the best of them.

Clearly, I had created a monster. And I was bursting with maternal pride because of it.

I wondered if a knack for poker might confer any advantages in life. Could we enter my kid in a preschoolers' tournament? Or list "cardsharp" on his application to Harvard (which I'd begun filling out in my head by midafternoon)?

The reality, though, was that I couldn't even brag to the other moms at karate class, for fear I'd be branded a heathen. And this was before I made the mistake of mentioning to Hunter that we'd have to change our tactics if we were going to bet.

As soon as the "b" word left my lips, I knew I shouldn't have said it. I wanted to suck the word back in, but I couldn't, of course. Instead I braced myself for the inevitable question.

I didn't hesitate this time. I had already figured out that poker without betting is like tennis without a net: It's an interesting way to pass the time, but a thrilling compulsion it ain't.

Of course, poker for money is a different animal entirely. Whole new levels of supple thinking, adaptability and deceit are needed when coins jingle in that pot, no matter if those coins are only copper. We broke out the piggy bank and got down to the real education.

Now, in addition to expanding my little boy's math and strategic skills, I was growing his vocabulary in a big way. I mean, how many kindergartners know the deeper significance of words like "fold," "raise," "call" or "ante up"?

Probably not many. But I am sure there are plenty of puritanical types who would argue that children of this tender age have no business knowing such terms at all. These are the same folks who won't let their kids say "hell," which is where they will insist my son is headed if I let him play poker for money.

I must beg to differ here. For six years I tested software for the manufacturer of a video poker game (the kind you see in casinos that pay real money, and devour even more real money), so no one knows better than I that if you play long enough, you are going to lose.

But I also know that believing Lady Luck is your personal savior is no more dangerous a delusion than any other, and I handled it the same way I would, say, my son's neat idea that just because he was wearing his leftover Superman Halloween costume, he could fly. Before we bet our first penny, I thoroughly explained that the house would always beat him in the end.

And Hunter handled my lecture the way he always does when I try to piss on his fun -- he ignored me. Still, experience is the best teacher, and I knew the only way to forever instill in my child an instinctive wariness of gambling would be to let him gamble.

I made swift work of his first penny pile. (While he may have had that beginner's luck at winning hands, he had no clue when, and when not, to bet.) He was so disappointed I thought the game itself might lose its luster for him.

To my surprise, Hunter took his losses on the chin. I was proud of him for this, too. Normally he is quick to tire of anything he doesn't win 90 percent of the time. This has not been the case with poker.

We've been playing for weeks now, and I must say that the benefits have far outweighed any risks. Not only has Hunter learned lessons in critical thought, logic and probability, he's become a more patient and dignified child (observing proper poker "etiquette," such as waiting for all the cards to be dealt before touching them). And I have learned a thing or two from all this: I'll certainly never limit my child again by underestimating his abilities.

Our richest rewards, however, have come as a family. Before, in the evenings, the three of us came together for dinner and bedtime stories, but we tended to follow our own separate pursuits otherwise. Occasionally we would play a game or sit around talking, but it's so easy to get into the habit of spending too little time with the people we love most.

Not us. Not anymore. Now we rush to get the dishes done and Hunter bathed so we can break out the antique poker chips my husband inherited from his grandfather and sit around the card table, chatting and laughing, each of us winning some, losing some, but certainly having more fun than grown-ups are supposed to have. Because we are playing for the fun, not the money.

Besides, as if all the other happy side effects of our sinful hobby weren't enough, we're currently hard at work improving Hunter's fine motor skills as we explore the art of shuffling.