"Once and Again" is once too often

The show stinks. The wife loves it. Trouble at home. 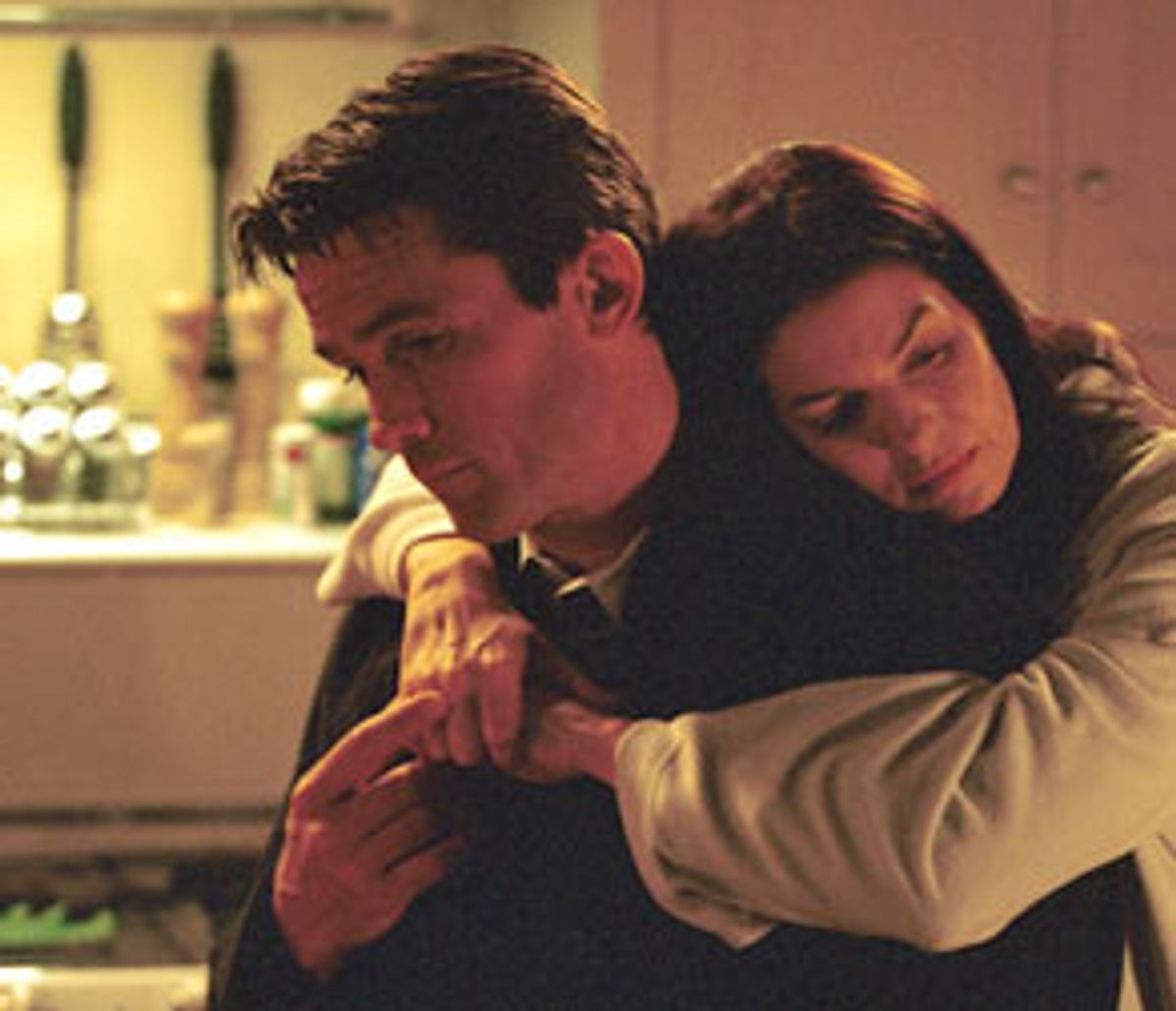 I hate "Once and Again."

The wife loves it. Wednesday nights are hard around our place.

It might just be the music. Maybe it's just the dreamy caterwauling girly people walking in slow motion on "Felicity" music. The music equals feelings, deep feelings, the kinds of feelings you sit in a room in black and white and talk to a camera about. I hate the music.

Don't get me wrong. I like feelings, like deep feelings, like talking about feelings. (The wife will disagree. OK, preferably not my feelings, but still.) I like girls, dreams, music and even, in certain moods, people walking in slow motion. But I hate that music.

On "Once and Again" they sit in a room, one at a time, and they're in black and white (black and white equals feelings -- deep, deep feelings), and they talk to the camera about their feelings.

We need the characters on "Once and Again" to do this because they are the most inarticulate bunch of losers ever to populate the public airwaves. The men are ineffectual and weenie-ish, the women ineffectual and solipsistic, and nobody, man, woman or child, can spit out what they, well, you know, what they want to -- listen, I don't wanna sound like a bad guy or anything but -- what they want to, you know, kind of like, sort of, um, say.

It's true that people do talk that way, sometimes, some people. But they also talk other ways. Like all at once sometimes. And stupidly. Silly, laughing. People make bad puns. Nobody, at least nobody I've ever met, or at least nobody I've ever wanted to talk to a second time, talks all portentous and slow all the damn time, every single word out of their mouths. And nervous. The people on "Once and Again" have all known one another for years, but they all act like they just met. All those years I spent watching movies and TV shows and saying, "Nobody talks like that. Nobody has just the right snappy comeback always ready. If only there were a show with realistic dialogue!" If this is reality, get me Noel Coward.

The only time the wife gets mad at me these days -- things are going good, they're really going good I think -- is when I offer my trenchant criticisms of "Once and Again." For example, she might say that what she likes about the show is that it's about "the more subtle parts of relationships. Like, it's not a big blowout fight -- he had an affair or whatever. It's more how real relationships are. It's just this one comment he made. That's what makes it interesting." To which I might say, "Yeah, but it sucks."

For some reason this bothers her. I wish I had a black and white room with a camera in it to go to, because I need to talk to somebody about that.

Nobody on "Once and Again" has much of a sense of humor. How can you want to hang out with these people? The younger sister -- oh, God, don't get me started on the straight from the character warehouse standard issue quirky younger sister with self-esteem problems who loves hates loves envies her sexy glamorous beautiful sexy lovely successful and did we say sexy she really is sexy folks ain't she it's not just hype you really believe she's sexy don't you big sister -- the younger sister might be OK, if she were snottier and not as self-absorbed as all the other characters and could riff humorously on their self-absorption and pettiness.

I want her to look into the camera, not when she's in the black and white room but right in the middle of the action, and say, "Do you guys believe these yutzes? I mean, get some real problems, folks. Listen, Michael Tucci -- from 'Grease,' you know? -- is guest starring over on 'Diagnosis Murder.' Go check that out for a while and I'll see what I can do to work on these losers."

Sometimes, despite the characters' tin ear for humor, the show decides to get funny. Lighten things up. People get kind of funny silly. They drop things. They bump into each other and get embarrassed because they're always kind of embarrassed anyway but now they've bumped into each other awkwardly or something. Oops! Ha ha! So whenever it's supposed to be kind of funny silly embarrassing, we hear the funny silly embarrassing music. Boink? B-doink doink? Ba-doink! It's kind of like in those old grade school nature films. Here's the little cub or colt or pup trying to learn how to walk -- look out, little fella! B-doinky doinky doinky doink, says the music.

"Once and Again" revolves around Lily (Sela Ward) and Rick (Billy Campbell), who are both divorced, and both have two kids, and they've fallen in love with each other, which means that on top of their self-absorption and ineffectuality and inarticulateness they have bad taste in the opposite sex. Lily is whiny and childish and annoying. Rick is dopey and eager to please and annoying. On top of all that, the actors, who are both very pretty, have no chemistry at all. There are exes around, but nobody's much better.

The wife loves that Lily. She calls her "my friend." I think she does this just to annoy me.

A lot of people watch it for the kids. Lily has two girls, teen Grace and subteen Zoe, and Rick has a teen boy and a younger teen girl. A friend of mine who loves the show (and whose boyfriend, good man, hates it) watches it for the kids, especially Grace. "I have been in mourning for Angela Chase for about five years now," my friend says, referring to the main character on "My So-Called Life," "and Grace is a pretty good sub, and even more realistic than Claire Danes because she's not as pretty, and is slightly overweight -- just like every 15-year-old I've ever known."

The same people who made "My So-Called Life" -- and "thirtysomething," by the way -- are responsible for "Once and Again." The navel gazing and whininess that were so true and appealing in "MSCL" were irritating in "thirtysomething" and are insufferable here. Kids, teenagers, are supposed to be that way. People in their 30s and 40s are supposed to be over it a little.

Things aren't going so well for "Once and Again." Two weeks ago it had a 6.9 Nielsen rating, tied for 44th place with "Dharma and Greg." Hit shows, like "Who Wants to Be a Millionaire" or shows on CBS and NBC, get half again as many viewers.

Perhaps that's why "Once and Again" resorted to the Very Special Episode gambit of a hostage crisis in Lily's ex's restaurant (starring Devon Gummersall -- Brian Krakow from "My So-Called Life"! -- as the gunman), an episode that included not one believable second, except when the gunman shot himself at the end, because who wouldn't after spending any time with this crowd.

The hostage episode got a 5.4 rating, tied for 65th place.

Last week was the moving-in-together episode -- will my drafting table fit here? Oops! Ow! B-doinky doink? Everyone has to move into Lily's house because they can't afford a new one, even though Rick is the chief architect on some sort of gigantic corporate retail/living space monstrosity. Yeah, that's generally a rough field, financially.

The kids, who all took the news that Lily and Rick had gotten engaged the way you'd expect them to take the news that the market was out of grapefruit so we got oranges instead, banded together to sabotage a family meeting to discuss the arrangements. After the kids stormed out together, stopping to warn Lily and Rick that this doesn't mean they like each other or anything, our ineffectual heroes smirked at each other and slapped five. The end.

I looked at the wife.

I put seven years of higher education to work on that question and, using every ounce of my critical thinking ability, came to this conclusion: God, who cares?