If Jenna Bush is a pothead, is it news?

The media has been silent about the National Enquirer's recent allegation that the first daughter is a marijuana user. Is the press giving the drug war's commander in chief a break? 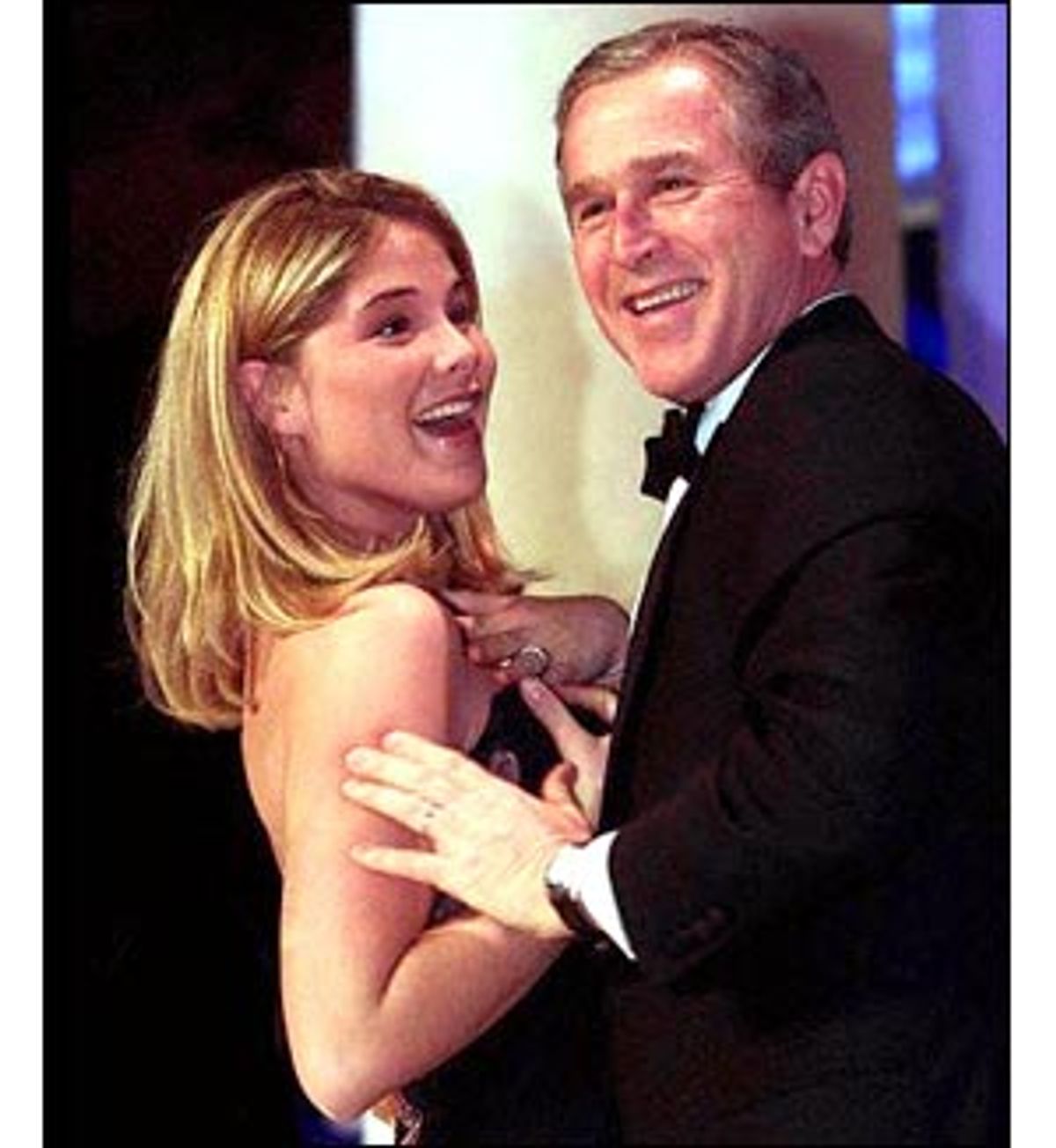 Should Jenna Bush, the 19-year-old daughter of the president, be in jail? Or at least be arrested? That's a conclusion to be drawn from a recent report in the National Enquirer that asserts she smokes marijuana. After all, some 600,000 Americans are arrested every year for marijuana possession -- including about 13,000 teenage girls. Some would say, of course, that Jenna Bush shouldn't be hassled for allegedly smoking pot, but then maybe nobody else should either.

The charge that Jenna smokes marijuana is found in the Enquirer's March 20 issue; the tabloid quotes two unidentified fellow students, one of whom says, "Jenna came over one night and we all did some doobies together. I wouldn't say she's a major pothead but she likes to toke up when it's around." Can unnamed sources be trusted? The answer to that question usually depends on the reputation of the publication.

Starting from a low base, the Enquirer's rep has been rising in recent years. It had so many scoops on the O.J. Simpson case that even the New York Times had to acknowledge its journalism; in the Ennis Cosby murder, the reward it offered broke the case. And just in the past few weeks, it scooped the establishment media on Jesse Jackson's "love child" and Hugh Rodham's receipt of $400,000 to influence his brother-in-law on presidential pardons.

One reason the Enquirer gets scoops like these is that it hunts for them, while other publications are leery of "scandal-mongering." But as media critic William Powers observed recently in the distinctly unsensationalistic National Journal, sometimes the real news is scandal: "Despite their well-known flaws, the tabs are now serious players because they know that great journalism isn't just about bloodless policy and issue debates. It's about ethical foibles and hypocrisies of the powerful."

Speaking of the powerful, George W. Bush, who refused to answer questions about his own drug use during the campaign, now finds himself as commander in chief of the worldwide drug war, being fought all over the Third World as well as on Mean Streets, USA. But if the Enquirer's pot-puffing allegation is to be believed, Bush's own daughter is nevertheless safe and sound, actively protected by the U.S. Secret Service -- this in the Lone Star State, where conviction on possession of 2 ounces or less of marijuana leads to a jail sentence of up to 180 days.

The White House dismisses the Enquirer report as not being worthy of comment. Noelia Rodriguez, press secretary to the first lady, said only this much on the record: "Our position on the daughters is that they're private citizens."

Fair enough, although that position doesn't shield others from being hassled over their activities as private citizens. As the drug war escalates, Uncle Sam's reach extends further. In 1998, Congress amended the Higher Education Act in an effort to exclude students with past drug convictions from receiving financial aid. According to Students for Sensible Drug Policy, some 8,600 college kids have lost some or all of their benefits during the current school year after revealing a drug conviction on their application form. Another 278,000 refused to answer the question; Congress is poised to tighten restrictions further to de-fund those students, too.

In other words, between drug busts and aid cuts, young people and pot is a big story. So why has there been utter silence -- a database search finds not a single reference to the Enquirer story in the two weeks since its publication -- on the Jenna Bush allegation?

Three explanations present themselves. First, reporters have found no evidence to corroborate the Enquirer's allegation. Fred Zipp, managing editor of the Austin American-Statesman, said in an interview, "From time to time we have pursued tips about the behavior of the Bush daughters" -- that is, Jenna and her twin sister, Barbara -- "but we didn't find anything newsworthy."

A second possibility, of course, is that the major media aren't much interested in marijuana-crime stories. Why not? Maybe because reporters, who may have had countercultural-pharmaceutical-type experiences in their own pasts, tend to empathize with marijuana dabbling. And so journos might not think that dope smoking is a crime worth getting revved up about. According to a Pew Center poll released this week, 38 percent of Americans admit they've experimented with marijuana. Extrapolated to the entire U.S. population, that's over 100 million experimenters. So maybe the media deserve credit for realizing that marijuana use is no big deal -- even when, allegedly, the "criminal" in question is a president's daughter.

A third possibility is that the non-tabloid pressies are simply afraid to follow the truth if they think it will lead them into trouble. Jane Hall, professor of journalism at the American University in Washington, observed in an interview, "It's not going to win reporters any points with the public to go after this story." But what about the law, which goes after plenty of pot users? Hall answered by noting the current split between popular culture and the legal culture: "The American public is forgiving; the penal system is not forgiving."

Needless to say, President Bush and the entire White House apparat would probably not feel forgiving toward the media entity that pursued a story about drug use in his family. That means no state dinner invitations for Enquirer editor Steve Coz. But it also might leave people wondering what revelations are being squelched by the reporters and editors who do show up at presidential fetes.

Who could blame Bush for feeling unforgiving and unfriendly toward those who would violate his family's privacy? But who could blame any other father for feeling similarly -- but perhaps unavailingly -- protective toward his own children as they are drug-busted?

This much is certain: The law is not nearly as forgiving to the nonwhite and the non-protected. According to the Sentencing Project, African-Americans account for 13 percent of the drug-using population, but a disproportionate 55 percent of those convicted of drug offenses.

Jenna Bush, of course, has been convicted of nothing. But the legal system her father now oversees looks increasingly guilty of discrimination against the weak and hypocrisy in favor of the strong.

And that should be a big story.

James P. Pinkerton is a columnist for Newsday. From 1979 to 1984, he worked in the election and reelection campaigns of Ronald Reagan and in the Reagan White House.