They won, they lost, they opened their mouths and spoke. And Steve Martin was f-u-n-n-y: Funny! 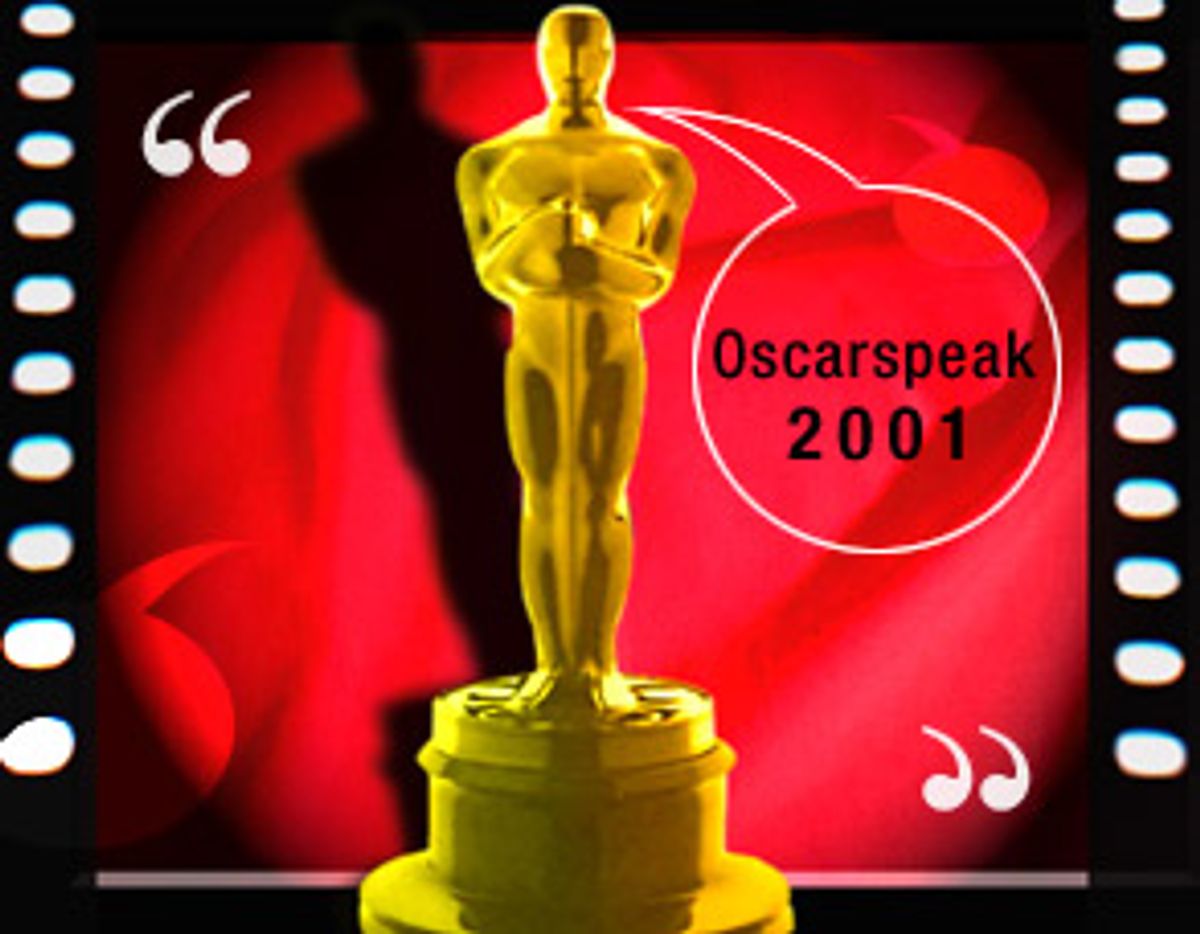 Damn that Gil Cates. I don't know if the Oscar winners were all going for the free TV that awaited the maker of the shortest acceptance speech or what, but you could count on two fingers the times the music swelled and pretty women appeared to ignobly escort the winner off the stage.

This made for a very restrained show. And slick. Too slick. Way too slick.

The only thing that seemed out of control: Benicio Del Toro's hair.

Sure, we can all be thankful for Björk's swan dress, Sarah Jessica Parker's micromini, Goldie Hawn's wacky teleprompter meltdown (I guess her reading glasses clashed with her outfit), Danny DeVito's midshow snacking (was that a tomato or a carrot?) and Ben Affleck's over-the-top bedhead, complete with untucked shirt and severe facial stubble (a look Ben Stiller was clearly going for, too). But when even Bob Dylan (who's looking more like Vincent Price every day) comes across as articulate, polished and on message and Angelina Jolie (with neither brother nor husband anywhere in sight) looks downright sober and conservative in a crisp white suit, well, it makes a girl a little nostalgic for the days of rambling political speeches and streakers. Or at least a "King of the World" exultation.

Maybe next year they should bring back Roberto Benigni.

I suppose part of the polish can be pinned on Steve Martin, who was way classier than your average Oscar host. But since I love him so much it sometimes hurts, I refuse to hold him responsible. And besides, he was laugh-out-loud funny all night long.

Nor can it be blamed on Julia Roberts, who -- along with a few others like Hawn and Hawn spawn Kate Hudson -- actually looked like she was having a good time. (She did, however, bow to convention and shave her armpit hair for the occasion.)

And it certainly can't be blamed on best director Steven Soderbergh, who mercifully spared us yet another laundry list of thank-yous and broke new ground by using his allotted time to say something meaningful and inspiring. It actually made me cry. (It was late, I was tired ...)

OK, A few people veered off script and said some memorable things. (But even the red carpet interviews were tame this year; Geena Davis, why have you forsaken us?) And so, without further ado, I bring you the evening's most quotable quotes.

"You have not been funny yet in this interview. I've been funnier than you've been."
-- Barbara Walters, chastising Ben Stiller

"We try to figure out creative ways of making love so we can see them but they can't see us."
-- Faith Hill on getting it on with Tim McGraw while keeping an eye on their daughters

"Hey, I have bad hair days just like everybody else."
-- Faith Hill on the human side of fame

"I walked by a poster of 'Grease' and I had a flash; I knew that I would be with him. I just knew."
-- Kelly Preston on her teenage premonition that she would one day end up married to John Travolta

On the red carpet:

"I've got my 14-karat gold Ray-Bans on."
-- Morgan Freeman on his trend-setting Hollywood style

"I come out on a live tiger, just kidding."
-- Sigourney Weaver on how she planned to make her entrance to introduce "Gladiator"

"Nothing's difficult ... That's what they pay me to do, so I do it."
-- Anthony Hopkins on acting

"We had breakfast with our family and a bunch of friends ... We were silly; we did acrobatics and ate tons of bacon."
-- Julia Roberts on how she and Benjamin Bratt spent the morning

"She never does. Why would she start tonight? Which I find kind of amazing given some of the things that come out of her mouth."
-- Benjamin Bratt on whether Julia Roberts prepared a speech

"I actually don't remember what happened to them, ultimately. I hope they had a happy demise."
-- Julie Andrews on her Oscar dresses past

"I think a lot people wish Russell Crowe had worn that outfit tonight."
-- Red carpet commentator Chris Connelly on the Oscar streaker who ran behind David Niven back in the '70s

From Steve Martin's intro (yes, this is almost the whole thing; I couldn't help myself -- he was funny):

"We live in a great country. If this statue were in Afghanistan, it would have been destroyed by now."

"When they asked me back in January if I would host the Oscars, the first thing that came into my mind was, would there be enough time for my face lift to heal."

"Thank you, astronauts. By the way, that introduction cost the government $1 trillion, so there goes your tax cut."

"All over the world, there are 800 million people watching us right now. And every one of them is thinking the exact same thought: that we're all gay."

"Show business ... is the most tolerant in the world. You have black people, white people, Asians, Hispanics, Jews, Christians all working together. All because of a single common love: publicity."

"Ellen Burstyn did something that not many actresses would do for a movie. She made herself look 30 pounds heavier and 20 years older. And Russell Crowe still hit on her."

"I love welcoming the young stars to show business because it reminds me of my own death."

"Julia, I miss our phone calls, but it seems that ever since you got caller ID, you're never home."

"This tuxedo was given to me by a famous designer provided I mentioned his name on the show. And the producers said, 'You can't do that. This is not the White House.'"

"There's Charlton Heston. Be careful what you say to him, because he thinks he was in 'Gladiator.'"

"If Tom wins tonight, that would mean between Tom and myself, we will have three best actor awards."

"It is not easy to keep a marriage together in Hollywood because ... well, we sleep with so many different people."

"To me, 'Crouching Tiger, Hidden Dragon' sounds like something Siegfried and Roy do on vacation."

"I saw the trailer to 'Dude, Where's My Car?' and it ruined it for me. Now, maybe that's not fair, because I had read the book."

"Hosting the Oscars is like making love to a beautiful woman. It's something I only get to do when Billy Crystal is out of town."

From the rest of the show:

"Members of the academy, thank you for taking the time to even view the tape and consider our film."
-- Marcia Gay Harden

"They used to say when they opened the envelope, 'And the winner is ...' And you'll notice they've changed it to 'And the Oscar goes to ...' Because God forbid anyone should think of this as a competition. It might make the trade ads seem crass."
-- Steve Martin

"There's an old saying in Hollywood: It's not the length of your film. It's how you use it."
-- Ben Stiller, introducing the nominees for best live-action short film

"Let's hope it's a name I can pronounce in real life."
-- Julia Roberts, announcing the award for best cinematography

"I'm going to talk really fast."
-- Peter Pau, just before spewing a lot of names really fast while accepting the award for best cinematography for his work on "Crouching Tiger, Hidden Dragon."

"I saw 'Crouching Tiger, Hidden Dragon,' and I was surprised because I didn't see any tigers or dragons, and then I realized why: They're crouching and hidden."
-- Steve Martin

"I'm a little upset with our next presenter, Samuel L. Jackson, who beat me out for the role of 'Shaft.' He had a black take on the role that apparently I didn't have."
-- Steve Martin

"This is an incredible view."
-- Winona Ryder, before gushing over Björk

"I was going to wear my swan but to me they're so last year."
-- Steve Martin on Björk's dress

"Dad, thank you for all your support."
-- Hilary Swank (who frankly could have used a little more support from her bra), making amends for an oversight last year

"This moment is directly connected to those childhood imaginings. So to anyone who's on the downside of advantage and relying purely on courage: It's possible."
-- Russell Crowe, accepting his best actor award for "Gladiator"

"I'm very grateful to the academy for letting a little country girl come to the big party."
-- Ashley Judd

"I got off the plane yesterday and realized that I had left my tuxedo in Nova Scotia. I would like to thank Dame Judi Dench for traveling across the country with my tuxedo so I could be dressed this evening. She is without a doubt the classiest delivery service I have ever had."
-- Kevin Spacey

"It felt like such a triumph to me to be on that list. My name starts with 'R' so I'm always last, but I still love the list."
-- Julia Roberts on her fellow nominees

"I can't believe this. This is quite pretty."
-- Julia Roberts on Oscar

"And turn that clock off -- it's making me nervous."
-- Julia Roberts

"Tom Hanks, who in my book took a shortcut to becoming a movie star: He only made hits. So here he is -- Mr. Easypants, Tom Hanks."
-- Steve Martin

"Russell Crowe, you filled a whole arena with the force of your face."
-- A "Gladiator" producer

"I want to thank anyone who spends part of their day creating. I don't care if it's a book, a film, a painting, a dance, a piece of theater, a piece of music. Anybody who spends part of their day sharing their experience with us. I think this world would be unlivable without art ... Thank you for inspiring me. Thank you for this."
-- Steven Soderbergh