Why USA Today and the Miami Herald delayed publishing their results. 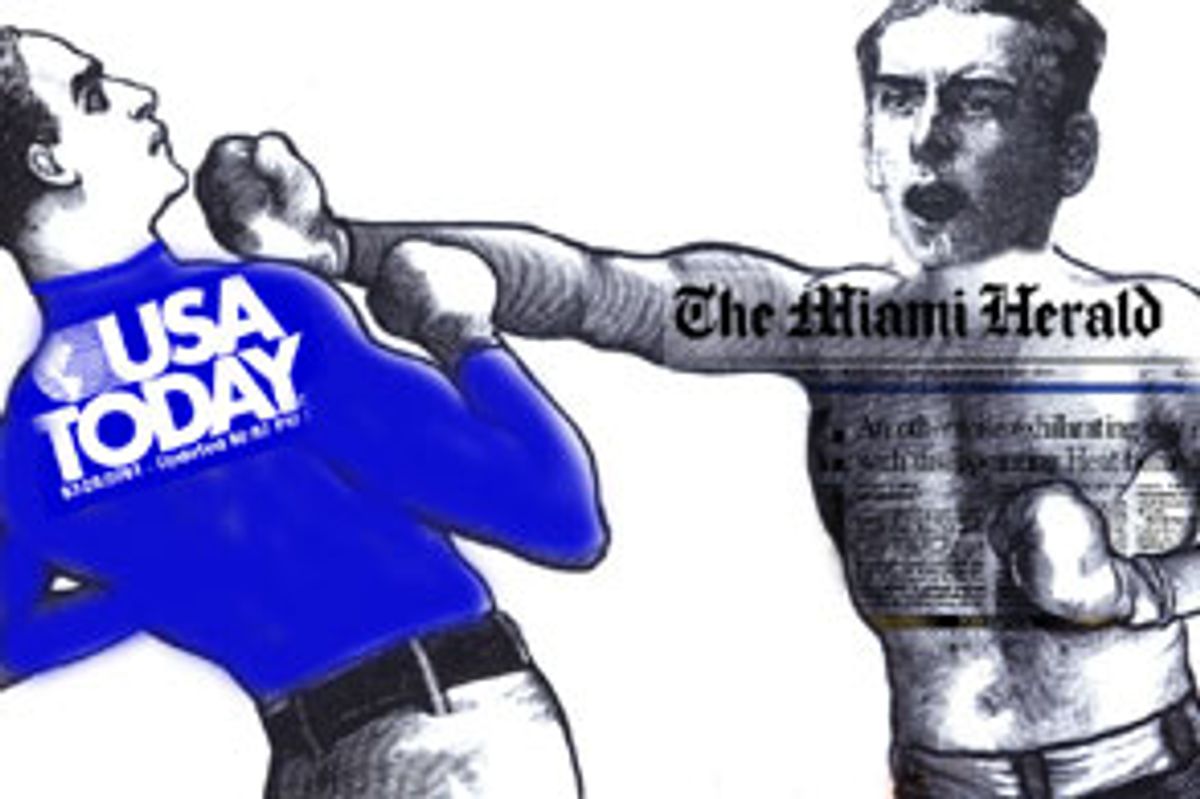 Miscommunication, conflicting stories and minor-league finger-pointing: all key ingredients in the endless Florida election recount saga. And, as it turns out, they're part of the recipe in the continuing drama surrounding one of the most prominent press recounts of the vote.

According to an Associated Press story last Thursday, the Miami Herald, USA Today and Knight-Ridder were scheduled to present the data from their joint recount project, a full recount of Florida's undervotes, on Tuesday. According to a spokeswoman in the Herald's office, editors were readying for an appearance on "Nightline" to announce the results Monday night. And the paper had spinmeisters from both parties ready to jump into overdrive.

And then the story never came. So what's with the bait-and-switch?

According to Mark Seibel, the Herald's managing editor, the paper was prepared to go ahead with the story and the recount results last week. However, Seibel, who has been supervising the review of more than 60,000 undervotes from all 67 Florida counties, says his counterparts at USA Today didn't understand some minor peculiarities in the data, and wanted to push back the deadline.

"They just didn't have enough time to get fully familiar with the database," Seibel says. To allow for more time to address USA Today's concerns, Seibel says, public release of the analysis has been postponed; he won't give a definite date when the recount will be published. "What is it that they say? Once burned, twice shy."

But Seibel's counterpart on the project at USA Today, reporter Dennis Cauchon, claimed there was never a set date to begin with. Cauchon acknowledges there were just a few questions about the data that USA Today wanted resolved before the big release day. "The database had some minor errors in it that we found," Cauchon says, quickly qualifying the problem: "It involved just 23 out of 64,000 ballots."

He repeatedly denies, however, that USA Today was responsible for pushing back the release date. "There was no Tuesday publication date scheduled. There was no press release," he says, calling the idea "an urban myth." He cannot account for what led to the AP story.

But it was likely a press release sent out March 22 by Julio Garcia of Thorp & Co., the public relations firm that was handling the recount publicity for the Miami Herald. Garcia says the advisory went to the major press outlets, including AP, complete with information about setting up Tuesday interviews with Seibel and others.

That came as a surprise to Cauchon. "You calling me has been the first I heard of it," he says, though he later did allow that someone in his office had mentioned hearing the announcement on CNN sometime Tuesday morning. But Cauchon says no one, including Seibel, had contacted USA Today directly about a March 27 release date.

"I can't imagine Dennis said that," Seibel responds, recalling conversations he had with Cauchon and Doug Pardue, USA Today's projects editor, when they discussed the timing of the story, and when to publish it to get a maximum bang for its buck. "We had talked several days earlier about trying to publish on the 27th of March, because we were worried about the Oscars, and [before the results of] the Florida census information," Seibel said. "Obviously they wouldn't have called me and said that they needed more time if they hadn't known the date."

Cauchon, for his part, repeated that USA Today never asked for "more time," though he couldn't remember at what moment he had contacted Seibel about his concerns over the data. "It's a fluid process. There's really no one moment," he said. "I talk to Mark or e-mail him 10 or 15 times a day."

Either way, Cauchon and Seibel dismissed the confusion as a minor distraction in the recount project, and say the belated release will benefit the project's accuracy. And they agree that there was no political motivation for holding onto their data a little longer. "That's absolutely ridiculous," said Cauchon. "That's bullshit," said Seibel. "You can quote me on that."

Nonetheless, the Herald/USA Today recount story will have an immediate political impact as operatives and activists from both parties prepare to tout or trounce the results.

There have already been partial recount efforts. The Herald got an early start in its second-guessing when it reported on Dec. 3 that Gore would have been the likely winner in Florida "if the vote were flawless." On Feb. 26, the Herald published its recount of the 10,644 undervotes in Miami-Dade County, declaring that Gore would have picked up a paltry 49 votes there had the Supreme Court ruled in favor of his recount plan. On March 11, the Palm Beach Post declared that, had it not been for the infamous butterfly ballot, Gore would have gained another 6,600 votes, more than enough to beat Bush. Last week, conservative advocacy group Judicial Watch conducted its own partial analysis of the Florida undervotes, and declared Bush the winner.

The Herald/USA Today recount has already faced some criticism intimating that by looking at "undervotes" only, the group has focused on too narrow a portion of the ballots to be relevant. And it faces inevitable comparisons to a consortium of news groups, including the New York Times, the Wall Street Journal, the Washington Post, CNN and the Associated Press. The AP is working with the University of Chicago's National Opinion Research Center to review all 180,000 "disputed" Florida ballots, but has yet to fix a date for the release of its study.

So if the Miami Herald and USA Today finally do issue their recount early next week, it will be the latest and, depending on which side you're looking at it from, most controversial new chapter in the Florida fracas.