Back to the Cold War?

As Bush rattles his saber -- and China rattles back -- tensions rise around the world. 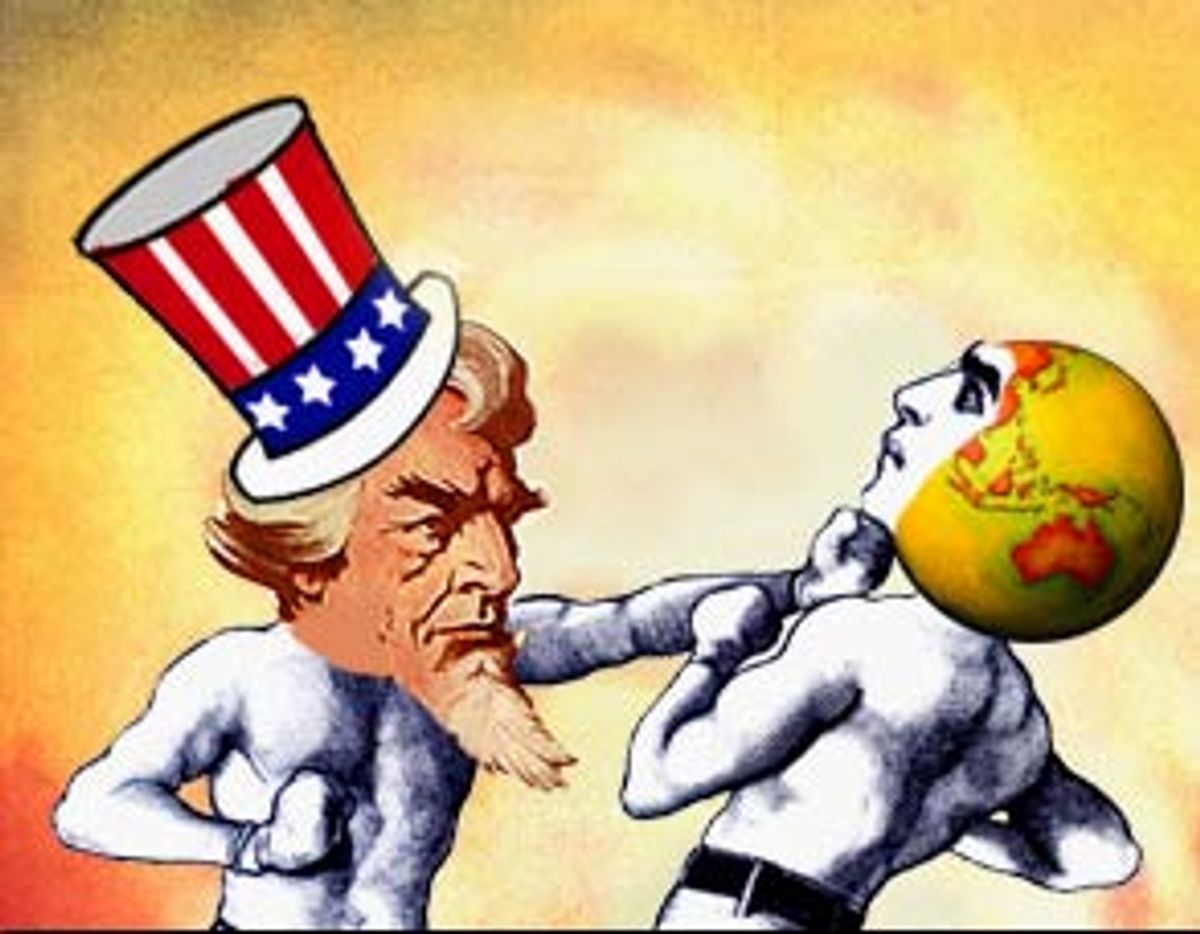 The diplomatic furor over the American spy plane forced to land on China's Hainan Island Sunday after bumping into a Chinese warplane appears to confirm that the U.S. is drifting into a time warp that's recreating the grim old days of the Cold War.

Nor has George W. Bush spared his allies, pushing them to swallow the National Missile Defense system which Europe detests as unnecessary, expensive and destabilizing. And less than a week ago, Europe was shocked by Bush's withdrawing the U.S. from negotiations over the Kyoto protocol on climate change -- a move that had little to do with defense policy, of course, but one that foreign leaders have widely perceived as a throwback to a unilateral, Cold War superpower approach to global problems.

So far no one is sure what's going on. Are the conservative advisors to the inexperienced president trapped in the rhetoric of the past? Are they seeking to advance what they see as America's national interests by taking tough stands that seemed to work during the Reagan years, the Cuban missile crisis or perhaps old westerns like "High Noon?"

Or is this simply a new team finding its way over some bumps in the road -- such as the legacy of genuine Russian spies, an intense Chinese fear of U.S. hegemony and North Korea's habit of nuclear blackmail?

Critics blame a backward-looking Bush team. "The Bush administration comes to power with visions of a world akin to that when the Cold War was still going," says former senior Clinton White House policy official Ivo Daalder, now at the Brookings Institution. "They see a world divided into black and white, good and evil. The bad countries are led by despotic, evil or confused people. Russia is led by spies, China by communists, North Korea by a despotic dictator. They believe you have to deal with these people firmly. No pussyfooting. Stand up, respectful but firm."

Other analysts agree that the spy plane impasse is more worrisome against the backdrop of Bush rhetoric about China. "The actual interdicting of U.S. aircraft by the Chinese goes on all the time; it has been for decades, but the current heightened tension began after Bush became president," says Rodger Baker, a senior analyst for Stratfor.com. "Bush's team has labeled China as a particular area of concern for Asia, and U.S. leaks of what our new foreign policy and military posture will look like have heightened tensions."

Still, there's no evidence in this specific instance that saber-rattling will take precedence over problem-solving as the Bush team tries to get the plane's crew back safely and resolve the incident.

"I certainly don't think we're entering a new Cold War," says a senior State Department official, speaking on condition of anonymity. "You have a moment where the new administration has not fully formed its ability to carry out our own policy and let us put our own stamp on things. To some extent, we've got to deal with things as they happen. Some are difficult, like the plane thing in China or the spy scandal with Russia.

"Don't think it's the entire policy. If people give it a couple of months they will see a more rounded and more positive policy. There is a desire not to reenter Cold War scenarios."

With or without a Cold War mentality, the United States has enemies and rivals, if not for strategic preeminence then for power and influence and wealth in the smaller theaters of the world. France covets its control over former colonies in West Africa; Russia wants to keep NATO from expanding eastward into the Baltics; India bristles at any outside rival within South Asia; Iran and Islamic terrorists oppose any Western presence in the Persian Gulf region.

But those sizable tensions don't explain the seismic shift between the Bush foreign policy of the campaign trail and the statements made by the White House since President Bush took office. During the campaign, Bush promised a "humble" foreign policy which would not humiliate the less powerful nations of the world -- that is, all of the rest of them. The talk was comforting -- until Defense Secretary Donald Rumsfeld and National Security Advisor Condoleezza Rice seized control of the dais, and pushed Secretary of State Colin Powell aside. Now, they say, U.S. policy will be based on "national interest," and there's much less talk about humility than during the campaign -- in fact, there's none.

The latest moves are also a far cry from what Colin Powell declared last week -- that U.S. policy would be based on U.S. "values." But what, exactly, those values are remains to be resolved. There's an ideological split emerging in the Bush administration between centrists and the right wing of the Republican Party. The battle lines have been drawn, but the winner is not yet clear.

Powell, the centrist, socially liberal black Republican from South Bronx who could have had the nomination from either party for vice president after the Gulf War, offers to continue talks with North Korea. A day later, recall, he was forced to back down. Powell goes to the Middle East with an offer to ease sanctions on Iraqi consumer goods if Arab allies, reassured Iraqi suffering is being eased, will tighten arms controls on Baghdad. Back in Washington, Republican hawks call him a chicken for easing any sanctions.

Even back when he was a general and chairman of the Joint Chiefs of Staff, Powell was more liberal than Vice President Dick Cheney, who was then defense secretary. In Powell's autobiography, "My American Journey," he recalls trying to convince Cheney to get rid of tactical nuclear artillery shells.

"Not one of my civilian advisors supports you," Cheney responded.

"I kidded him," Powell writes: "'That's because they're all right-wing nuts like you.'"

The Cheney-Rumsfeld-Bush team may seek to rekindle some other Cold War battlefields. It's not hard to imagine them resurrecting Savimbi's rebels in Angola, tilting away from democratic India to Cold War ally Pakistan, or restoring aid to repressive militaries in Indonesia and Guatemala. And aid to Colombia's drug war could quickly expand to aid in fighting leftist guerrillas. Covert actions could be taken to support center-right and rightist candidates while undermining center-left and leftists in places like Nicaragua, Haiti, Honduras and Central Asia.

Ivo Daalder says there is no doubt a tug-of-war going on between Powell and the right. "Rumsfeld seems to consistently win because Cheney and Rice are in his camp," he suggests. "Powell seems to be the odd man out."

The State Department official denies the existence of any rift. "I don't think there is any evidence that Rumsfeld is on the right of Powell," he says. "Powell is with the president on all these issues. You take a guy like Powell who talks about these things and juxtapose him with guys who are not out there so much and you will have some disagreements -- but not in their fundamental approach. The president fundamentally does not want to restart the Cold War."

Les Gelb, president of the Council on Foreign Relations, agrees. "The Cold War is not coming back," Gelb says in a telephone interview from New York. "Even if there is an increase in tension with Russia and China, neither one has the will or the resources to confront the United States around the world. Relations can get nasty, but not dangerous as they did in the Cold War," he says.

Gelb reminds us that the Cold War was a time when the U.S. mainland was threatened with a flaming, radioactive, nuclear holocaust. These days, even if a Russian, a Serb, a Chinese or an Iranian might dream of such an attack, they are all but incapable of mounting one, Gelb asserts. So the new tensions between old Cold War adversaries are tempests in a teapot compared to the real Cold War.

Yet Daalder sees a mentality that's similar to what led U.S. hawks -- including current Defense Secretary Donald Rumsfeld -- to form the Committee on the Present Danger in the 1970s and 1980s, in order to warn of the Soviet threat. Today, of course, Russia is but a shadow of its former self -- its economy in ruins, its people dying faster than they are born and its military rusting away. It's got nuclear weapons but no bread and medicine. Daalder fears that by hyping the threats from Russia, the Bush administration could create a self-fulfilling prophesy.

And while the Bush team tries to install its players and write new policies even as things fall apart around it, and petty tyrants from Iraq or North Korea see how far they can get with the new administration, there is a growing chorus of critics who warn that the China threat is an incipient new Cold War.

Not only is China the rising power in Asia, it is the one country that openly dismisses the United States as a role model, seeking to modernize economically but keep tight social and political control over its 1.3 billion people. It also defies U.S. efforts to stop weapons proliferation, selling nuclear, missile and other technologies to North Korea, Pakistan and Iran.

According to a recent publication by Michael Pillsbury, a China analyst at National Defense University, there's a power struggle going on inside China that is far greater than the one some believe separates Powell and Rumsfeld. Pillsbury's book, "China Debates the Future Security Environment," reports that Chinese hawks believe the United States is morally bankrupt and ready to fall within a decade or two.

And while Chinese soft-liners on the U.S. urge their nation to lie low and try to lull the Americans into submission, lest American hard-liners try to transform China into our new enemy, Chinese hard-liners compare Americans to Nazis and wild beasts, and urge a much tougher stance.

This gulf in thinking perplexes U.S. military analysts, who are unsure just who is in charge in Beijing. They try to read actions such as the close pursuit of U.S. electronic spy planes as a sign of hard-liner tactics.

U.S. military officials say that in recent weeks they had warned the Chinese not to fly so aggressively when following the U.S. patrols, which they say take place over international water. This is in itself an issue, since China claims as its own a vast swath of the South China Sea -- which is also claimed by Vietnam, the Philippines and other countries. The United States considers it international waters. It was over these contested waters that the planes collided, sending the Chinese plane and pilot into the sea where the pilot remains missing.

Meanwhile, Bush said yesterday he is not pleased that there has been no U.S. contact with the crew of 24 men and women, and neither has he been assured the Chinese will respect the integrity of the aircraft and not enter it.

U.S. offers to help in search and rescue efforts for the Chinese pilots went unanswered. Bush himself failed to answer a question yesterday shouted at him by a reporter on the White House lawn: "Are the crew hostages?"