Where have you gone, Bill Grabarkewitz?

An oral history of the Los Angeles Dodgers forgoes baseball for gossip, and leaves a hometown boy wondering where his memories fit into the picture. 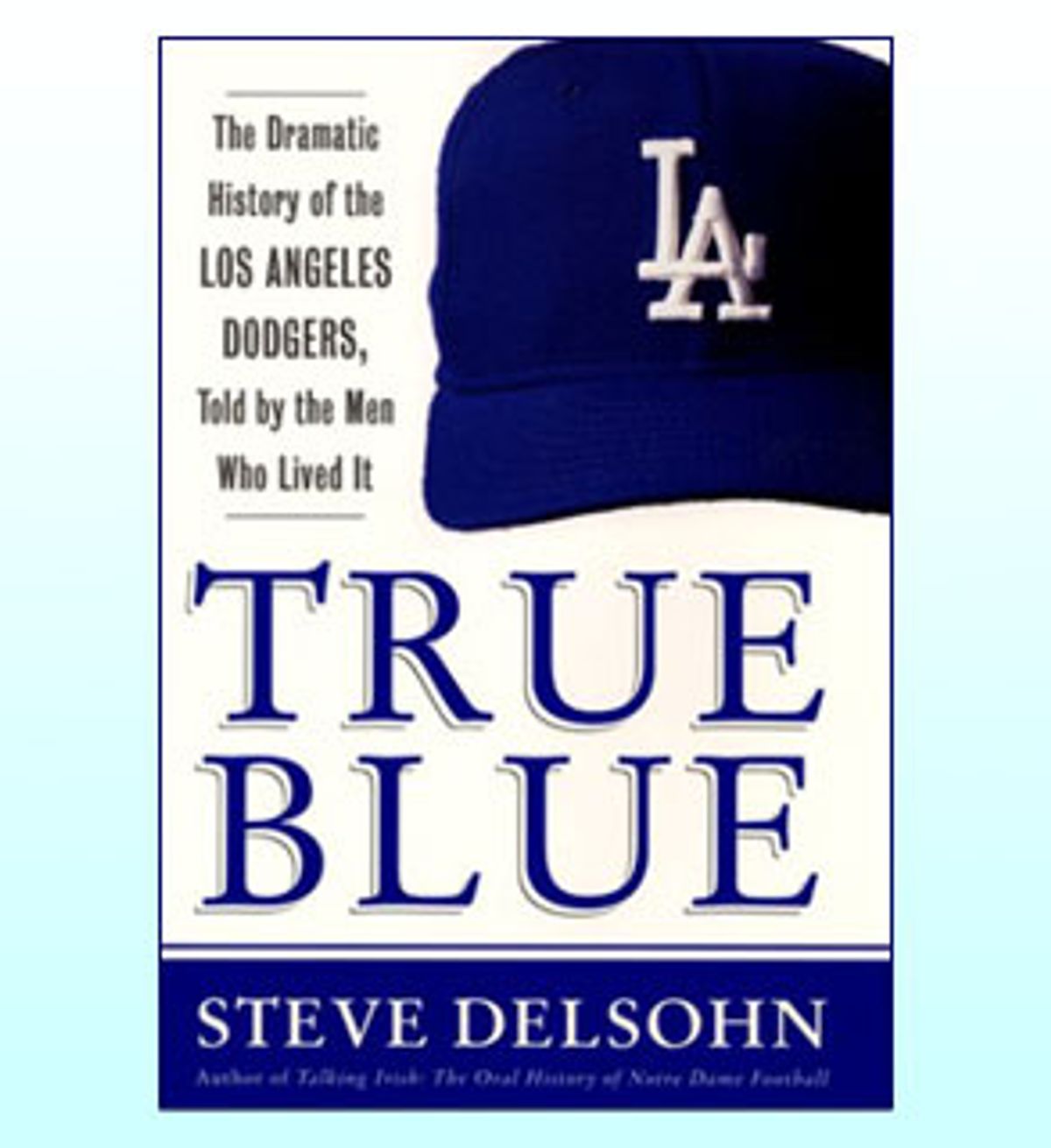 If I've learned nothing else in my years in journalism (and nothing's just about what I've learned), it's that you don't want to meet your heroes, because they're sure to disappoint you.

Now I've learned that you don't want to read your own history either, because whoever writes it is going to get it wrong, all wrong, whether they get it right or not. Because your history is yours alone: If a plane crashes into your house, everyone else will talk about a plane. Your story will be about a house.

I grew up near an airport. Fortunately no planes crashed through the front window, but I might have taken a Cessna in the living room if it meant the hometown Los Angeles Dodgers could have escaped defeat in the 1974, '77 or '78 World Series. (I'd have had to stipulate that nobody be home at the time of the crash. I was no fanatic.)

Those World Series are recounted in "True Blue: The Dramatic History of the Los Angeles Dodgers, Told by the Men Who Lived It," an oral history by Steve Delsohn that also covers the Dodgers' trips to the Fall Classic in 1959, '63, '65 and '66, before my time, and '81 and '88, after I left town, and all the nonpennant years in between and after. (The Dodgers won all those other Series except '66.)

A book about the Los Angeles Dodgers only tells part of the Dodgers' story, of course, since the team had a long and storied history in Brooklyn before its 1958 move west. And my time as a Dodger fan is only half of my story, because once I grew up I did something unthinkable: I switched my allegiance to the San Francisco Giants.

For non-baseball fans who might not appreciate the enormity of that statement, try to picture a Hatfield becoming a McCoy. Well, it's sort of like that, but, judging from the reaction of those around me, more shocking. "That's like changing your skin," one flabbergasted friend said when I revealed the transformation that, even though you can't tell it by looking at me, lurks in my past.

So for me, reading "True Blue" was a little like going to a family reunion after a divorce, or maybe some kind of religious conversion. There were a lot of familiar folks there, but I didn't feel quite the same way about them that I used to.

Still, the memories the book brought back were mostly good -- of Dodger Stadium with its red-brick infield and that particular, strangely Californian view, hazy sky and palm trees and scrubby little hills, and on a sunny day the uniforms white, white, shiny white; of Vin Scully's voice echoing through the stands or filtering through my pillow; of those two-color scorecards, with the green or red highlights, in the center of the thin programs with their silly P.R. features and posed pictures from spring training; of Doug Rau and Bill Sudakis and Willie Crawford and Rick Rhoden, players I hadn't thought about in years.

But that's just me. "True Blue" took me back to those days, but it won't make you feel as though you've lived them if you didn't. (Hell, poor Willie Crawford, a Dodger for a dozen years and always a future star, goes unmentioned.)

Last year I picked up a book called "The Spirit of St. Louis: A History of the St. Louis Cardinals and Browns" by Peter Golenbock. Picked it up as a joke, really. Who but the most fanatical of Cardinals fans, I wondered, could be interested in a 600-page oral history (600 tightly packed pages -- the leading in "True Blue's" 294 pages is quite generous) of their team and the Browns, gone to Baltimore nearly a half-century ago? Well, I started reading and was riveted. Bringing few memories of my own to the enterprise, I found myself engrossed in this tale of a city and its teams. Golenbock also has a book called "Bums: An Oral History of the Brooklyn Dodgers." I haven't read it but I bet it's a gem.

"True Blue" is nothing of the kind. Here's one of those rules of life, to be filed away with that Nelson Algren bit about not eating at places called Mom's or playing cards with guys named Doc: Books with the word "Dramatic" in the subtitle are going to be lacking in drama between the covers.

Delsohn seems to be most interested in how the Dodgers felt about and related with one another. That leads to some interesting passages: Walter Alston, the manager from 1954 to 1976, comes across smarter and tougher than the somnambulant grandpa I remember from my childhood. Tommy Lasorda, his successor, is clearly more than the cartoonish cheerleader he sometimes appeared to be.

And Kirk Gibson. When the intense outfielder who'd led the Detroit Tigers to the world championship in 1984 (unmentioned by Delsohn) arrived to a complacent and laid-back team in 1988, he took it over. The victim of a harmless prank in spring training, he stormed out of camp, returned the next day and addressed the team.

"You wanna have fun?" he recalls saying to them. "Winning is fun. You want to be a world champion? You might have to play hurt. You might have to play sick. And don't be screwing around when it's time to play." It was a different team after that. Gibson's legendary home run in Game 1 of the Series might not have been his most important contribution to the championship that year.

But mostly, this life-as-high-school, People magazine approach leads to more than anybody could ever want to know about how the guys felt about Steve Garvey, which was essentially: "The guy's a spotlight-hogging phony and the mom and apple pie good-guy act is both annoying and a sham. (Helluva hitter, though.)"

Well, OK. But I think we knew that anyway, and it's kind of disheartening to get a chance to hear the players from those great teams talk, and they sound like, well, like a bunch of guys in high school cliques. "Steve had his own agenda," says second baseman and leadoff hitter Davey Lopes, now the manager of the Milwaukee Brewers. "He wanted to be Mr. Dodger. And there was some bullshit involved, to be honest with you. There was a lot of favoritism from the Dodgers."

Shut up, former hero. Get back in my memory.

Safe! One of the greatest infields in history has botched the rundown! Bill Russell bunts Lopes over and Reggie Smith drives him in with a sacrifice fly. Rhoden throws a shutout and the Dodgers win, 1-0.

Now there's no reason for this minor episode, significant as it was to wildly cheering me, to show up in a history of the team. But how can you tell the story of the Los Angeles Dodgers and mention Vin Scully only three times, all in passing? Not only is the Hall of Fame announcer the only major figure who spans the Dodgers' entire time in Los Angeles, he's also the fans' single greatest connection to the team. I wrote in a 1999 profile of Scully, "I still hear him in my head, the voice of baseball for me." And I left Los Angeles two decades ago.

And that's not all that's missing. Where's Billy Grabarkewitz? During his one and only good year, 1970, the Dodgers orchestrated a write-in All-Star campaign. Talk about a tough sell: "Don't forget, fans, you spell it G-R-A-B ... uh, hang on a minute ..."

And where's Al Downing's improbable 20-win season, followed by his return to journeyman status? Where's Willie Davis, who only patrolled center field for 13 years, three pennant winners and two world champions, and rates a mention only for his disastrous errors in the '66 Series? Where's Wes Parker, a perennial Gold Glove first baseman who was the cleanup hitter for several years? Where's Hideo Nomo, whose rookie year in 1995 inspired a "Hideomania" reminiscent of the frenzy caused by Fernando Valenzuela a generation before? For that matter, the Dodgers have had more Rookies of the Year than anyone, and most of them rate little or no mention.

Even worse, Delsohn skips over some important people and events to talk instead about minor figures who fit better into his soap opera format. For example: If you read "True Blue" you'll know nothing about 1972 except that Bobby Valentine, a Lasorda protégé, clashed with Alston over playing time and was traded away at the end of the year. Bobby Valentine? He's famous now as manager of the National League champion Mets, but he was never an important player, with the Dodgers or anyone else.

The story of the 1972 season was future Hall of Famer Frank Robinson, whom the Dodgers had traded for that off-season. They'd given up Doyle Alexander, a promising right-hander who went on to have a pretty good, and very long, career with a bunch of teams other than the Dodgers, but Robinson was a bust in L.A. But! After that season, the Dodgers traded Robinson, along with Valentine and three others, to the California Angels for Andy Messersmith, who pitched the Dodgers to the pennant in 1974. The '74 chapter fails to mention his 20-win performance. And not only that: Robinson had been brought in to replace slugger Richie Allen, who had been traded to the White Sox for Tommy John -- who pitched the Dodgers to the pennant in 1977.

In 1980 the Houston Astros, leading the Dodgers by three games, came to Los Angeles for the last three games of the season. One win would give the Astros the division title. The Dodgers had to win all three just to force a one-game playoff. For three straight days, Dodger Stadium was filled and rocking. Crowds at Dodger Stadium are famous for arriving late, departing early and sitting on their hands in between. Not that weekend. That weekend, they -- we! I made it to the second game -- were like college football crowds. The Dodgers won on Friday. They won on Saturday. They ... won ... on ... Sunday!

Here's how that dramatic scenario plays out in "True Blue": "When Los Angeles and Houston both ended up 92-71, it forced a one-game playoff and thrust a key decision on Lasorda." The decision had to do with who would pitch the playoff game, and incidentally, they both finished 92-70, not 92-71.

The Astros ended the Dodgers' season that Monday by pounding them in the one-game playoff, but that weekend remains among the most electrifying moments of my life as a sports fan. I've been to championship fights, Rose Bowls and big rivalry games, NBA and NHL playoff games, World Series and League Championship Series games, and I don't know that anything has ever matched the intensity and excitement of being 17 years old and watching my favorite team play and win those three do-or-die games.

That's my history, and I'm sticking to it.