I hope it's true that every marriage, sometime in its existence, knows a moment like this. An excerpt from a novel about a man's evolving sexuality. 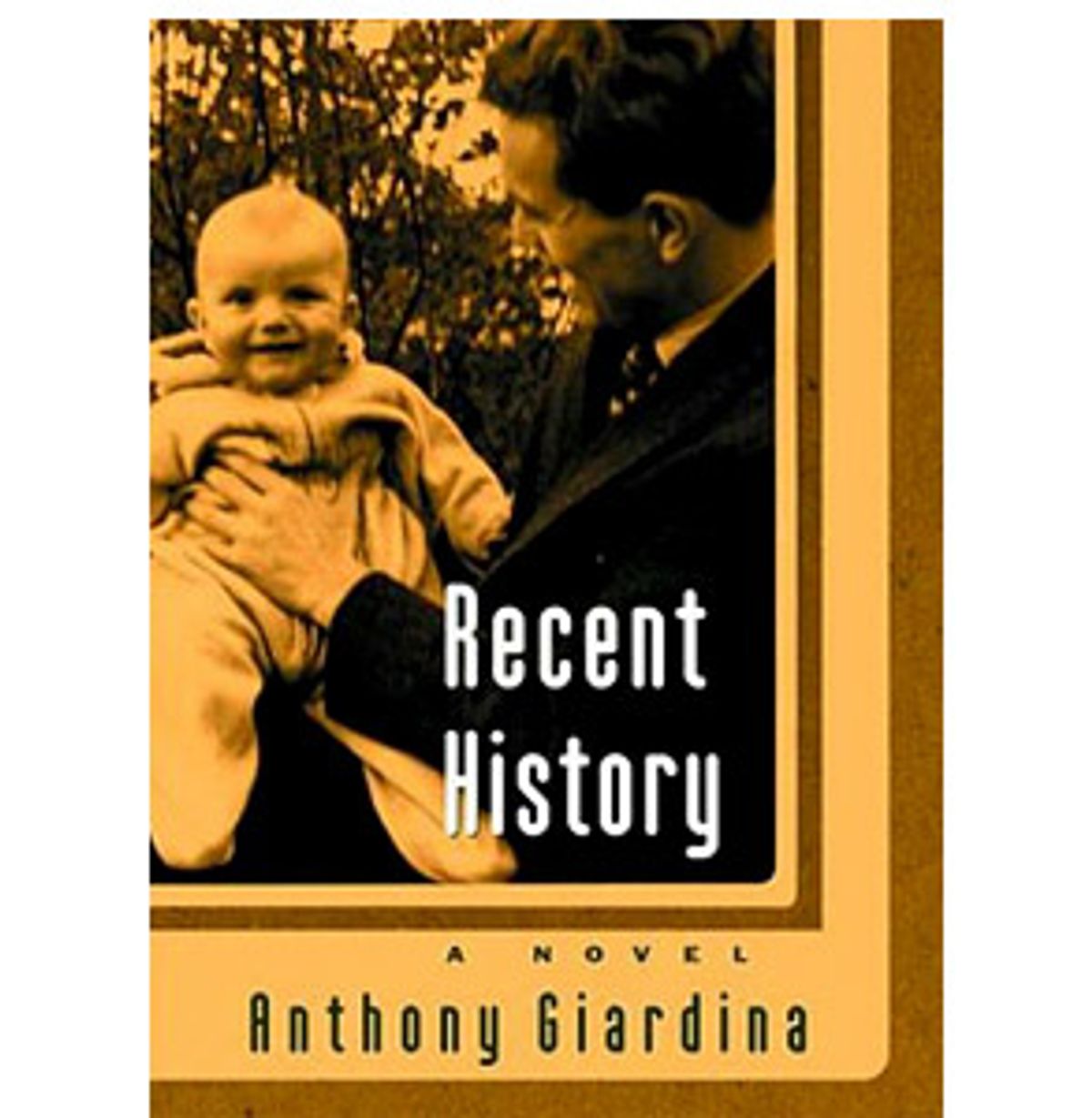 On the drive, in June 1986, between the small New Hampshire cemetery where Bob Painter was buried and the gathering of mourners back at the inn, Gina asked me to pull over to the side of the road. "Over here, anywhere," she said.

"Why? Do you need to pee? We're almost there." We had been late arrivals at the cemetery; my father, standing graveside, had gestured to me and then pulled me close and held my hand tightly. Because there was so little to be said there (the crush of mourners, a surprising crowd, my father's need to get back for the reception), I was anxious that we make it back with speed, and not display, by our behavior, any sign of disrespect.

After I had stopped, Gina simply looked around at the woods, which were hot and white with midsummer dust.

"I don't want it to go too fast" was all she said, when she had finally decided to speak. Then she lifted the cloth of her skirt and laid her hand against it.

I looked closely at her. "What's going on with you?"

She glanced at me, and from the way she looked, I could see just how far apart our moods were. I was wearing my one black suit, a maroon tie, and seeing me in this rare guise (we dress casually at the high school) seemed to make her smile.

She pouted her lips, as if to tell me the answer was not so easily expressed.

Gina had not laid eyes on this place since coming here with Neville Barnes, at that point seven years before. She was thirty now. She was still a young woman.

She looked around and sighed with what I read as a kind of contentment, and at a certain point got out of the car and walked a few steps forward before resting against the hood.

I leaned out the window so she could hear me. "Gina, I don't want to be late."

She shook her head, to silence me, to let me know that, for anything like an answer, I would have to wait.

It was, as I say, 1986. When I look back on that time, it's quite natural for me to try to frame it by means of the movies that were playing, but that, I recall, was a lousy summer for movies. The whole mid-eighties, in fact, seem to me a bleached-out, unduly optimistic moment in American history, supported by nothing more than relief at being done with the troublesome sixties and seventies, and the movies may only have been reflecting that. "Ferris Bueller's Day Off," "Stand by Me." What did those movies possibly say to anyone? "Top Gun," "The Fly." No boy, seeing them with his father, could ever use such movies as a way into the dark recesses of the adult world. Gone was any sense of the old American stoicism; we were all expected to be happy now.

Gina and I, six years married then, were probably unwitting exemplars of the national curve. We went through our days as if nothing had been ordained for us but the nurturing of habit. We bought cookbooks and tried things out. We found the cottage in Wellfleet, and, later, we found Andrew Weston. We had our personal jokes, a small encyclopedia of erotic interplay that was ours alone. We were unthreatened because there wasn't anything substantial enough about us, perhaps, to be threatened. (Of course that's not true, but we both perceived the threat to be far away.) We were like a new country that had not yet written up a charter, designed a flag, suffered a punishing war. Thus, we could believe -- I think we did believe -- that nothing held us.

Now my wife sat stock-still on the hood of the car, and I sensed something in all of this was about to change, become settled and hard. So I got out of the car and joined her.

She was wearing a small smile. "Do you suppose there's a motel nearby?" she asked.

I folded my arms and leaned back against the car. We had not determined that we were going to stay over, but if we were, I thought it would be polite to stay at the inn.

"What do you want to do in a motel that we can't do at the inn?"

"No," she said, shaking her head almost violently. "I don't want it to happen there. Not there."

"For what to happen?"

I hope it's true that every marriage, sometime in its existence, knows a moment like this: a time, not the beginning, but a middle time of renewed wildness, when impulse is given way to, when the presence of another is support enough to do things we would not otherwise give ourselves license to do. Gina shook her head against my words and started running. She ran a long way down the road. She gave way to something. And I simply watched her, amazed as I could sometimes be, a little worried that we would be late for my father's gathering, but knowing intuitively that this -- whatever it was -- was more important.

She was a long way from me when she turned around. Then she stopped a moment before she began walking again toward me, slowly, like she had all the time in the world. I was aware of the glow on her face, and the soft, relaxed movement of her hips.

When she got to me, she put her face right up to me and kissed me hard. She broke away just long enough to show her delight, then kissed me again. She wrapped her arms around my back and squeezed. She also, for good measure, put her hand down the front of my pants. A couple of cars passed us, but she didn't care. I have learned that when a woman feels this degree of passion, you get out of the way. You let her do what she needs to do.

When she broke away from the second kiss, she rested the top of her head against my chin, and started to laugh.

"Someday," I said, "you're going to tell me what this is all about."

"I'll tell you now," she said. "This has only happened a couple of times to me in my life. It happened while I was watching you at your reading, and it just happened again." She smiled, putting the tiniest of spins on the next thing she would say. "A little bird goes fluttering around my insides."

She looked at me, then bit her lower lip, deciding to be unashamed of those words, freeing herself, if only briefly, from the habit of irony. I thought I was supposed to understand a great deal, based on what she had just told me.

"This little bird?" I asked.

"Okay, so I'm ready," she said and looked down a little shyly.

Somehow I knew what she meant before she said it.

"I'm ready for that baby we never talk about. My body just told me that. We can talk about this until we're blue in the face, but what my body wants to do is jump you."

"We're at a funeral" was all I could think to say.

"I know, so let's let impulse pass us by, right? There are motels. There are woods."

She gazed up at me with chastening impatience.

"Because you want it, right?"

She hesitated, looked at the ground, at the front of my shirt, finally into my eyes. "Yes."

When I didn't say anything, she said, "And you want it, too. I just felt you, so don't tell me your body doesn't want to. And maybe that's the only thing we should be listening to."

I looked at her face then, to check for signs of doubt or weakness and, finding none, broke away from her. I went and sat on the edge of the ditch by the side of the road. First I made sure the grass was clean. She came and sat beside me. I had my hands folded and I was looking down at the grass between my legs, not seeing it or thinking anything, really, hoping she would have changed her mind in the brief interim.

Gina ultimately knew that I couldn't be forced, so I managed to convince her that if she wanted a baby so badly it could at least wait until that night, until we had paid our respects to Bob, until we were settled safely in the inn, or in that motel she talked about. I meant it, too, at least meant it for the moment, though it scared me. What I actually thought we would do was begin talking about it that night, have a long and interesting discussion of this new thing in our marriage she wanted to introduce. Then we would plan some unspecified date in the future on which we would begin trying. We would have years, I guessed, before all this really came to a head. That was what I convinced myself.

Gina meanwhile sat in silence, listening to me, keeping her own counsel, until she finally gave in. And that, right there, her deciding to wait, might very well constitute the turning point in our marriage. If we'd gone ahead and not paid our respects to the dead, if she'd just blasted through toward her own desire, we might have conceived a child, if not that time then another time. I'd have been going to Andrew Weston's ash scattering with a five- or a six-year-old, and though this would have made my torment infinitely more difficult, it would also have made it harder for Gina and me to get to the place where we were so ready to split. Paying our respects to the dead, you could say, has been our undoing, Gina's and mine, or nearly. We sat on the side of the road that day, beside that dusty ditch, and I came up with all the arguments why things could wait, how it would be better to go back to the inn and drink coffee and eat the little sandwiches and shake hands with strangers and join in the ancient rituals of mourning. When I die, I hope some couple coming to mourn me go off and fuck and make a child. That's the advice I'd give them. Go do it. Forget the niceties of grief. I believe that now, but of course, I didn't then.

Anthony Giardina is the author of "Recent History."