When Duke meets Arizona for the NCAA title, the winner will be whoever can get closer to playing a whole game, which nobody's been doing so far. 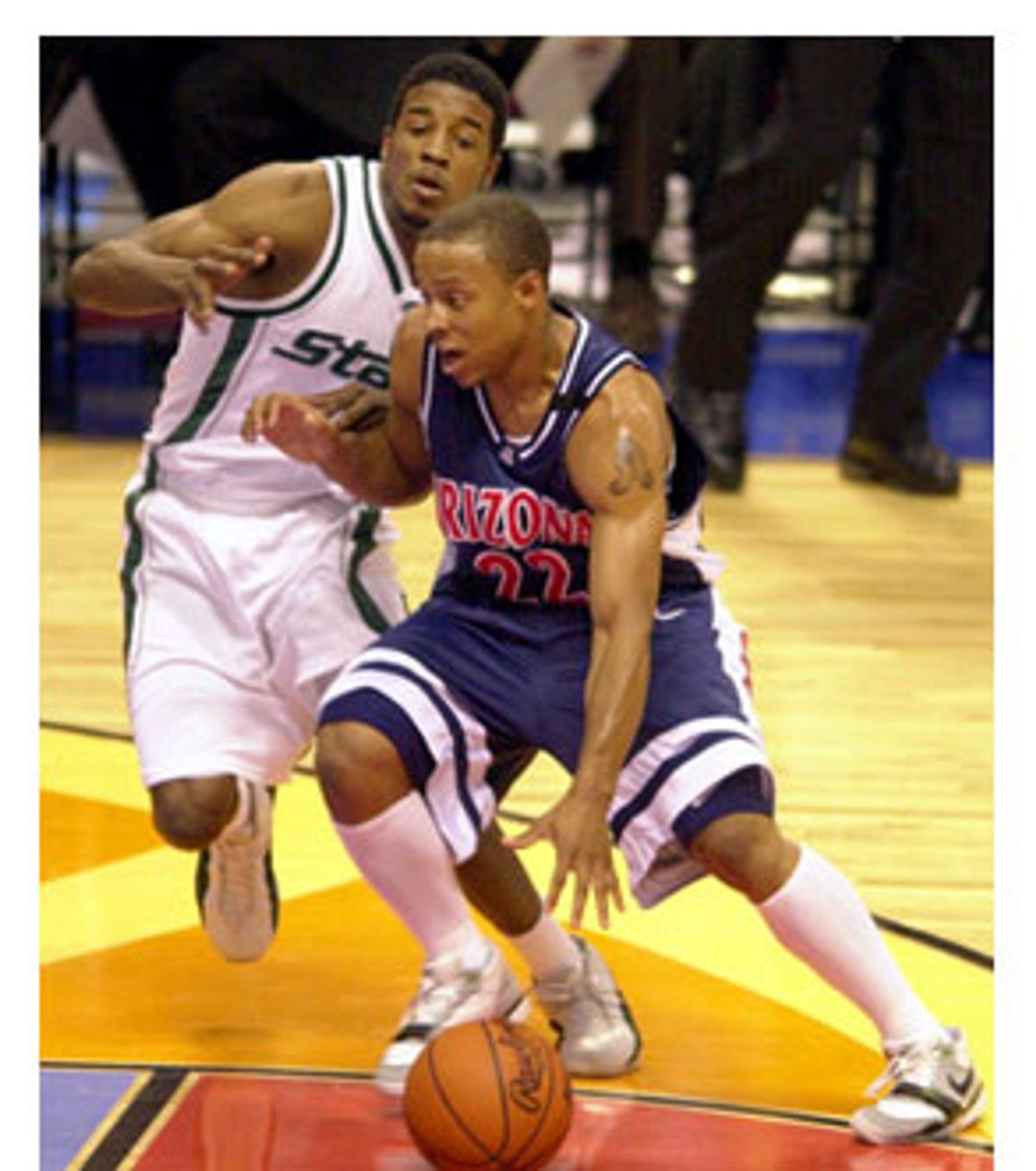 Beyond the first round, this Tournament has not been a festival of upsets. Two No. 1 seeds marched into the Final Four, and a third qualifier, Arizona, was a No. 2 seed that likely would have been a No. 1 had the Wildcats not had a 5-5 stretch early in the season. That stumble ended with a loss to Stanford the day after the funeral of coach Lute Olson's wife, Bobbi. There were also a couple of suspensions early in the year. But since that loss to the Cardinal, the Wildcats have gone 19-2, and their win over the Midwest Region's top seed, Illinois, really couldn't be considered an upset.

Arizona's win over defending champion Michigan State in the semifinal Saturday left Spartans coach Tom Izzo unable to explain his team's turnovers, mostly on intercepted passes that had Izzo smacking his forehead like the smart half of one of those old Warner Brothers cartoon hoodlum duos when his pal does something stupid, like forget to breathe. "We just did some things out there that were unSpartan-like," he said after the game.

The explanation is that Arizona was so much better and quicker than Michigan State that it was silly. Michigan State's players, apparently unwilling to believe what they'd been seeing, continued to make cross-court passes, allowing Arizona's quick guards, Jason Gardner and Gilbert Arenas, to jump into the passing lane. The puzzling thing wasn't how Arizona outscored Michigan State by three touchdowns in the second half, but how the Spartans stayed close in the first.

The answer to that is that the Wildcats didn't play a whole game, which leads us to Duke, which also didn't play a whole game in the other semifinal against Maryland. But the Blue Devils played well enough once they did start playing to overcome a 22-point deficit and win going away. Duke guard Chris Duhon said, "It's a 40-minute game and they beat us for 12 minutes. If you're going to beat us you've got to do it for 40," which isn't quite true, because Duke doesn't always play whole games either -- witness those first 12 minutes Saturday. The Blue Devils took their first lead with 6:52 to go, so another seven minutes -- for a total of 19 -- would have been enough for Maryland to build an insurmountable lead, no?

This inconsistency can no doubt be laid at the feet of youth, a relative term when talking about college kids, but the flood of college-age players heading to the NBA has led to a younger NCAA, even on the best teams. Seniors Shane Battier and Nate James are the only upperclassmen among Duke's seven-man rotation. Arizona is older, with juniors Michael Wright and Richard Jefferson and seniors Loren Woods and Eugene Edgerson among the Wildcats' top seven, but Gardner and Arenas, the team's leaders because Woods refused the role, are both sophomores.

So we can do one of those old-fashioned analyses of the two teams to try to figure out who's going to win Monday. We can talk about how Arizona looks a little quicker inside and a little stronger inside, but that they don't have anything to match the dominant play of Battier and point guard Jason Williams. We can talk about Arizona's zone defense, Duke's three-point shooting and discipline, and whether Woods, who ought to be dominant, will be the extraordinary player he was down the stretch against Illinois or the invisible man he's been at other times. Saturday he was somewhere in between. There's also the fact that Arizona's players consider themselves to be on an emotional crusade, wanting to win the title for the much-loved mother figure Bobbi Olson, and that Duke is Duke, coached by Mike Krzyzewski, against whom you bet only with the mad money.

But it all comes down to the X factor: consistency. We can be pretty sure that both teams will have their moments of brilliance and at least one stretch of mediocrity or even downright awfulocrity. And we can therefore be pretty sure of a close game with some mood swings. The question might be who can get out of their wheels-off-the-wagon period more quickly.

When I filled out my bracket, I picked Duke to win. Arizona's playing better than anybody right now, but it says here that Battier, Williams and the Blue Devils' mental toughness will be a little too much, and all of us who picked favored Duke to win will tell ourselves we're geniuses.