Will an imploding stock market kill off plans to privatize our national safety net? 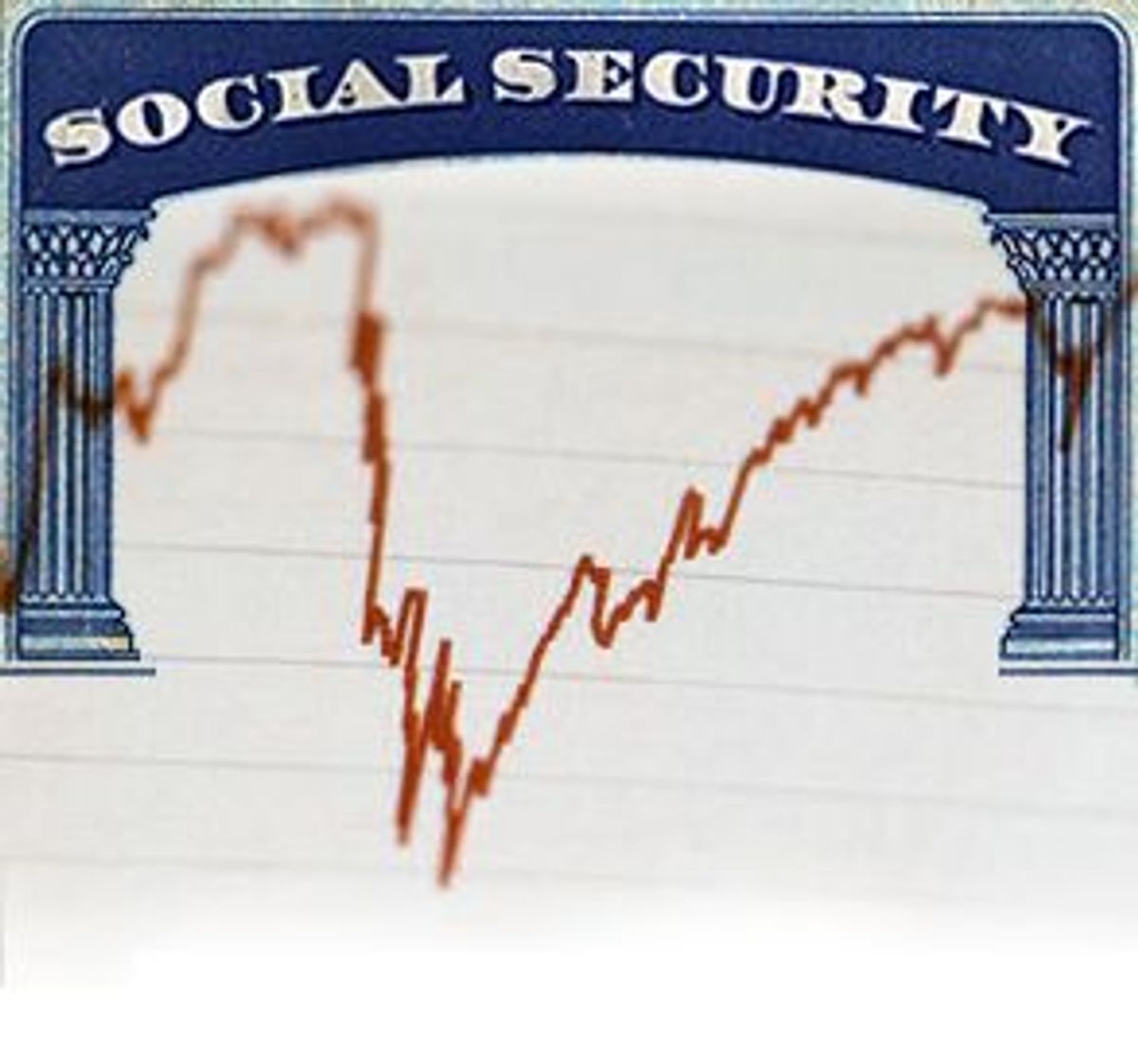 These are lonely days for the fading bull market's giddy stock pushers.

Disgraced stock analysts like Mary Meeker, Abby Joseph Cohen and Henry Blodget are suffering the humiliation of having their sunny predictions about the markets thrown back in their faces. It's also unlikely that we'll see James Glassman and Kevin Hassett, coauthors of "Dow 36,000: The New Strategy for Profiting From the Coming Rise in the Stock Market," stumping for their pie-in-the-sky guide to investing on CNBC anytime soon.

But neither NASDAQ's dizzying fall of more than 60 percent from its high just a year ago nor the Dow's teetering on the brink of full-blown bear territory has deterred President Bush from his plans to bring the wonders of stock market investing to the government's biggest program -- Social Security.

While the markets melt down -- and investors wonder why, why, why they didn't cash out last September -- the president is setting in motion his plan to privatize Social Security. Just when you thought that the country was getting its rude collective comeuppance for that extended bout of irrational exuberance, Bush is saying that what this country really needs is more of our money -- our retirement dollars -- in the market.

In late February, when the Dow hovered over 10,000, Bush told Congress that he would form a presidential commission to reform Social Security. By next fall, he promised, the group would make recommendations on how to preserve benefits of current retirees without raising taxes, while offering "personal savings accounts to younger workers who want them." In other words, workers could allocate part of their Social Security contribution to personal accounts that they could then invest in the market.

Right now, a 2 percent rate of return looks downright flush compared with what the stock market is currently delivering. Could there be a weirder time to be promoting the value that the stock market could bring to Social Security dollars than when the market is suffering its most gut-wrenching decline in a decade?

Imagine that some version of privatization was already in effect, and you'd put a portion of your Social Security dollars in an index fund that tracked the S&P 500 Index, a relatively conservative investment. Over the last year you'd have watched your investment plummet almost 25 percent, with most of that hit coming in the last two months. In 2000, the S&P 500 had its worst year since 1977, posting returns of minus 9 percent.

Whoops! Too bad you didn't retire a year ago! And heaven forbid you'd hitched your golden years to a fund tracking the NASDAQ, which fell 39 percent in 2000 and has fallen almost that much already in 2001. Still, the proponents of Social Security privatization argue there's never been a better time to let the market play a bigger role.

They certainly are. Some in the anti-privatization camp see whatever enthusiasm there has been for privatizing Social Security as a byproduct of the stock market bubble. "When we had a terrific bull market, it seemed very attractive. People thought: 'Gee, if I got this money, and I invested it, and it returned 15 or 20 percent, I'd be better off,'" says Lee Goldberg, a spokesperson for the National Committee to Preserve Social Security and Medicare, a Washington lobbying and advocacy group.

But now with the markets sagging, it's hard to get excited about privatization. "I think the downturn in the market casts very cold water on the entire debate. I mean, people are going to look and say: 'Wait a minute. Do I want my life savings and a pension at risk that way?'" Sen. John Kerry, D-Mass., told CNN.

"With the market gyrating the way that it is and in a downward spiral, privatization isn't going to go anywhere," predicts Robert Reischauer, president of the Urban Institute, a policy group. "I have been a strong opponent of privatization schemes because they impose a greater burden of risk on individuals that many will be unable to bear. And the recent gyrations in the stock market underscore the uncertainty that would be inherent in any privatization scheme," says Reischauer.

Even advocates of privatization acknowledge the disconnect between the market climate and the push to privatize: "I presume it's going to be a more difficult psychological sell," said Sen. Judd Gregg, R-N.H., also on CNN.

"Forget last March -- where are we relative to 20 or 30 years ago?" argues Richard Thau, president of Third Millennium, an advocacy group for young people. "You're talking about investing over 30 or 40 years. In no previous 30- or 40-year period in American history has the market gone down."

In a press conference on March 12, Bush defended his plans with the same argument: "Markets go up and down. Over a 20-year period in time, markets go up significantly more than the rate of return that the Social Security trust now generates on behalf of those who put payroll tax money in." He added: "The plan is not going to be invest in the lottery mutual fund, or take it to the track and hope to hit it right; it's going to be in relatively safe investments. Government-guaranteed bonds, for example, [have a] higher yield than what the Social Security trust gets."

The Dow fell 317 points the next day. It's not the lottery or the track -- it just feels like it.

The irony is that even if that is true, privatization still may be politically untenable.

"What one has to consider is how fair the retirees believe the program is when they retire," says Reischauer. "If you had a brother who had worked at the same type of job that you did, and invested his private account just as you had, and he retired last March, and you retired this March, you're going to retire a year later with a pension that is 25 to 30 percent lower than his.

"It isn't a convincing argument to say that that isn't the comparison that you should be making," continues Reischauer. "You have to ask what people are going to compare this to when they ask, "Is the system dealing me a fair hand?' They're going to compare their situation to the situation of those with a little older or a little younger experience. If you think about someone who retired in 1995, and his younger brother then retires in the year 2000 with a pension twice as large as his, that's going to be really galling."

But critics like Reischauer note that the real fight, should Social Security ever be partially privatized, will not be over the differences in potential payouts for far-future retirees but over how to maintain current retirees' benefits without raising taxes as baby boomers reach retirement.

So what's next in the current climate? As Goldberg from the National Committee to Preserve Social Security and Medicare points out: "Politically, Social Security is not going to be coming up on the legislative agenda for the next few months."

And if the stock market continues to decline, marshaling the forces to win the privatization battle may become ever more difficult. But the opposite is also true. While Bush's committee meets over the next few months to try to implement his recommendations, the proponents of privatization still have time for the markets to bounce back and help their cause.