It's a wonderful lifestyle 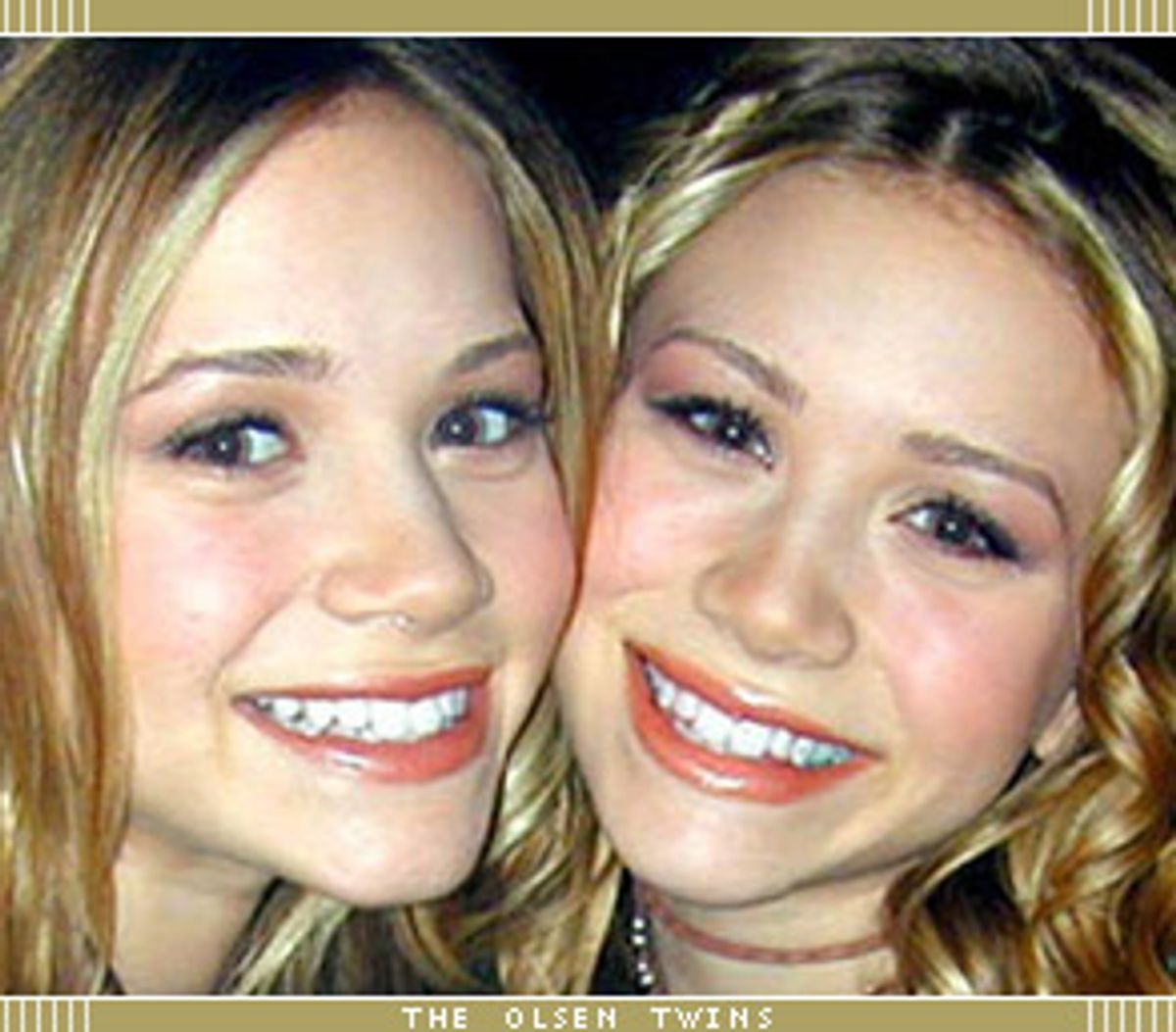 As Tammy Wynette once sang, "Sometimes, it's hard to be a woman." That was a long time ago, though, before Martha, Oprah and Rosie came along and made it harder.

Now the Olsen twins have added their names to the roster of celebrities with eponymous "lifestyle" magazines. Mary-Kate and Ashley -- those impish sitcom critters-cum-preteen merchandising juggernauts -- have just launched a new glossy dedicated to instructing young girls in the care and feeding of their second X chromosome. The twins' new publication will offer helpful tips on, among other things, what to wear for spring, what goes on in the minds of boys and how to feel really good about yourself even if you're not a freakishly cute, underage billionaire with your very own business manager.

"Ever wish you were thinner, smaller or looked more like the girls on TV? Here's why," reads an excerpt from an article called "You're Better Looking Than You Think."

"Open a magazine. Turn on a TV show. Look at a billboard on the highway. Chances are, if any of these feature a girl, she is noticeably thin -- maybe even tiny. They're different girls -- models, actresses -- but they have two things in common: Similar builds and exposure. Because they're thin and they're everywhere ... subtly reinforcing the ultra-slender image of a girl, be aware."

Mary-Kate and Ashley choose not to ponder this particular irony. And why should they? If the success of their predecessors proves anything, it's that blind megalomania sells. If you're on a first-name -- or, better yet, first-initial -- basis with millions of adoring fans, they will buy your magazine and do as you say. Today's girl-of-all-ages wants not so much a design for living as a detailed blueprint of somebody else's life to follow to the letter. This is the kind of information that could go straight to a young celebrity's unusually large head, and Mary-Kate and Ashley are not immune to its awesome power. Perhaps making an oblique reference to George Mallory's famous motive for climbing Everest, the girls listed the "top 10 reasons we created a magazine" in their debut issue, citing No. 1 as, "Because we can."

"Girls don't just want to meet Mary-Kate and Ashley," Robert Thorne, co-editor of the magazine and the twins' brand manager, told Inside. "They want to be them."

There's no shortage of men and boys with power, money and obsessive fans in the world, and yet it seems unlikely that we'll be witnessing the launch of "Bill's Content," "Matt and Ben," "Greenspan's" or "M: The Michael Jordan Magazine" any time soon. Famous men seem to sense, somehow, that readers would find it hard to follow the Federal Reserve chairman's recipe for a low-cal Chinese chicken salad, or check out the former president's "Women We Love" issue without wetting themselves. Even the founders of the now-defunct George magazine had the good sense to refrain from featuring its celebrity creator on every cover. This sort of thing, George's editors probably reasoned, would have undermined the publication's credibility. So would have calling it "John-John."

John-John! Now he's strolling on the beach! Now he's waving hello from a convertible! What a jaunty scarf! Now he's peeking out from behind Fran Drescher's head! Is that a wig he's wearing? John-John!

But millions of women, apparently, like this sort of thing. All four publishing mavens get a great deal of mileage out of reminding their readers not to feel diminished by the images presented to them in other magazines. The more we hear about the lack of female role models in positions of power, the more female role models in positions of power pelt us with magazines, TV shows and networks instructing us to ignore other media and pay attention to them, instead. You know, for our mental health.

Sometimes, self-esteem can look a lot like pathological narcissism. The cover of this month's O reads: "OPRAH talks to HER HERO, the awesome, inspiring, noble NELSON MANDELA." (OPRAH and HER HERO are noticeably larger than NELSON MANDELA.) Other articles include "O: What I Know for Sure," "Oprah on Setting Yourself Free" and "Five Things Oprah Thinks Are Great." (These include faux apples and pears, $18 each; a set of Murano glasses, $40 each; and a book called "Spiritual Literacy: Reading the Sacred Truth in Everyday Life," which helps Oprah "see the extraordinary in ordinary experiences." Incidentally, when does Oprah not see the extraordinary in ordinary experiences? If she were capable of any more childlike wonder, she'd be ineligible for the death penalty.)

Narrowing the genre further, Rosie (formerly McCall's) is the magazine for the woman who wishes she were Oprah. Rosie peddles a slightly less self-assured narcissism. "I have no idea how to write a letter to the editor," she writes in her letter from the editor. "I'm still at a loss ... I feel inferior to all the 'real' editors ... I'm a comic who dropped out of college ... I had a 1.62 GPA ... The reality is [this] isn't my magazine."

Still, the magazine manages to squeeze in an article in which "Rosie gets the last word," another in which we peruse the candy aisle with Rosie, an essay by Rosie about her new daughter and a calendar whose sole purpose is to mock Martha's and Oprah's magazines. ("May 24: Delay spring cleaning until summer.")

The main thing Oprah, Rosie, Mary-Kate and Ashley have to offer -- aside from cute tops, chicken recipes and pithy affirmations -- is an alternative to other famous people, some of whom may be harmfully attractive and shallow. While young girls may still revel in the fantasy of being or somehow becoming Mary-Kate and Ashley, Oprah and Rosie are there for us -- the grown-ups -- helping us cope with the crushing reality of not being Gisele Bundchen.