In the bratty "That's My Bush!" the "South Park" boys claim they're sending up sitcoms, not George W. Right. And Cartman's a genius. 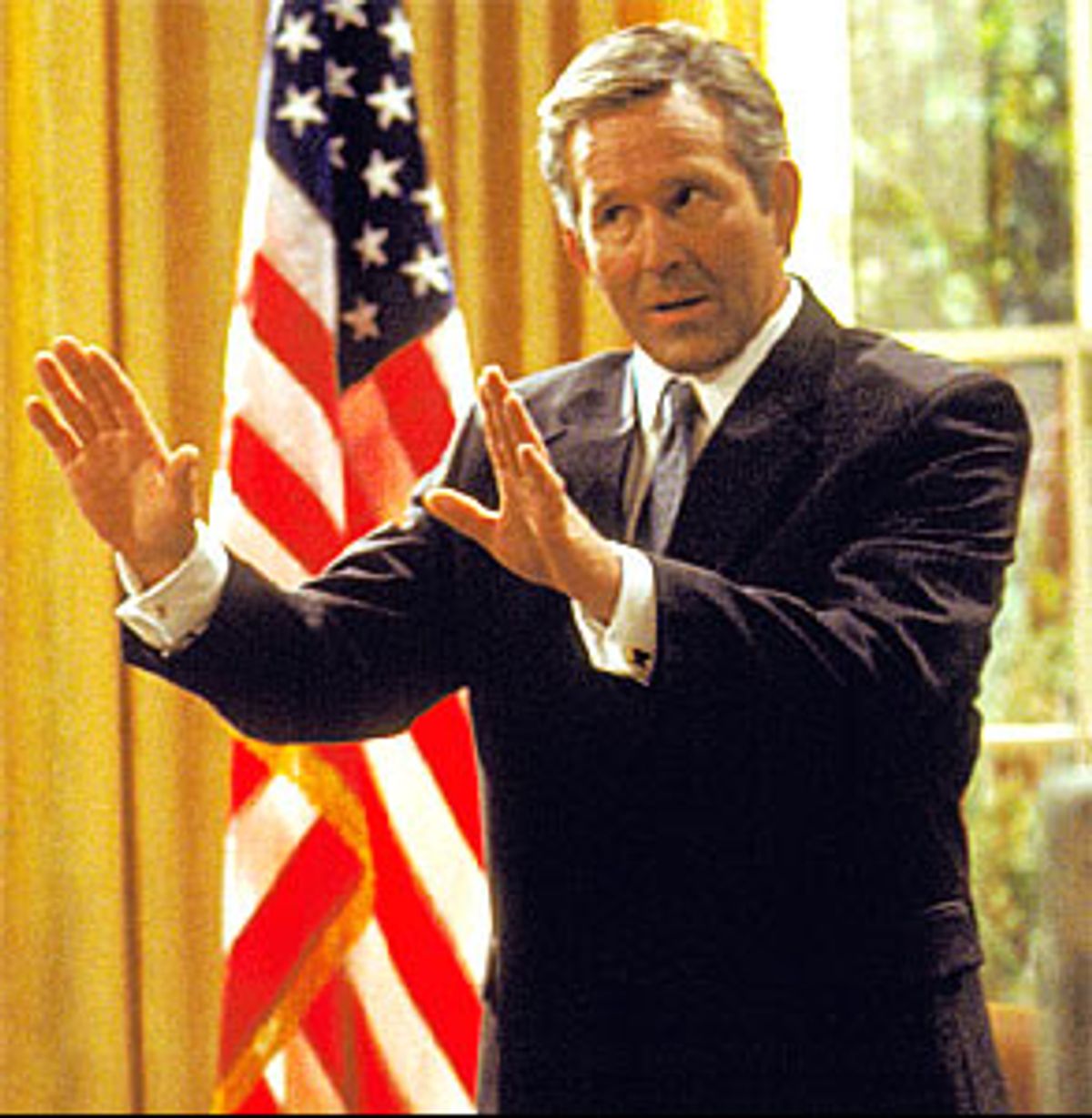 There are some pretty good jokes at George W.'s expense in "That's My Bush," the new Comedy Central sitcom, premiering Wednesday at 10:30 p.m., from "South Park" brats Trey Parker and Matt Stone. But Parker and Stone's best jokes may have been the straight-faced answers they gave the press in "That's My Bush"-related interviews over the past few months.

They're not really making fun of the president, they insist, they're more interested in making fun of sitcoms, which they hate. "'Everybody Loves Raymond' takes a character and makes him into an icon," Parker explained in an interview with the news service Reuters. "We thought it would be so subversive to take someone who's real and maybe a little vilified and try to make everybody love him." If Al Gore had been declared the winner of the 2000 election, claim Parker and Stone, they would have done a sitcom about him. Hey, they didn't even vote last November! But if they had, they might have had Republican leanings.

Yeah, and Eric Cartman is a Rhodes scholar.

"That's My Bush" (the official title has an exclamation point as a shout-out to the short-lived '70s black sitcom "That's My Mama!") is a rude and crude portrayal of Bush as President Dumbass. It made me laugh out loud a few times. But, then, I voted for the other guy. "He's the president in residence/He's sort of in charge/ He's got the whole country sayin'/'That's my Bush!'" goes the swingy theme song, played over a montage of Our Leader in one wacky Lucy mess after another (covered in soap suds, wearing a maid's uniform).

Played by Timothy Bottoms, the George W. Bush of "That's My Bush" is an inept sitcom paterfamilias in the tradition of Ray Barone, Hal from "Malcolm in the Middle" and, yes, Homer Simpson. He's the bumbling head of the household (and country) who has to be rescued from jams by the smarter grown-ups around him, his long-suffering wife Laura (Carrie Quinn Dolin) and his advisor Karl Rove (Kurt Fuller).

So he and Karl arrange a fake execution, during which George gets carried away showing off for his pals. He taunts the prisoner ("You have the right to die like a little bitch and have your soul sent to hell!"), jabs him with the lethal injection and threatens him with the "gas chamber" before breaking wind in his direction. But guess what? There's been a zany sitcom mix-up!

"Ah can't believe ah killed that man," George wails to Laura in the obligatory "lessons we have learned" bedtime scene at the end of the episode. "He begged for his life and I farted on him!" To which the wise Laura soothingly replies, "It's no different from those 152 men you put to death in Texas. You just did it yourself this time!"

As a sitcom spoof, "That's My Bush" has all the clichés down cold. There's the sassy maid Maggie (Marcia Wallace), who rags on the president with the sort of crowd-pleasing topical barbs sassy maids were always flinging at their employers in '70s sitcoms. "Don't you have laundry to do?" George asks her, exasperated. "Yep, I gotta do like your father did and separate the whites from the coloreds," she snaps, as the audience woo-hoos on cue.

Then there's Larry the nosy neighbor (John D'Aquino), who pops into the White House unannounced, grabs a beer out of the fridge and shoots the breeze with George. When Larry comes up with the beginnings of a scheme, George narrows his eyes and grunts, "What'choo talkin' 'bout?" like Gary Coleman on "Diff'rent Strokes." And, of course, there's George's mutated Ralph Kramden tag line, which the audience recites along with him: "One of these days, Laura [chuckle, chuckle], I'm gonna punch you in the face!"

One sitcom cliché missing from "That's My Bush," though, is the brood of adorable, mischievous kids. Comedy Central ordered Parker and Stone to drop their planned portrayal of Bush twins Jenna and Barbara as sexy lesbian lovers. Now there are no children around for Laura to mother, but that's OK, because she has her hands full with George.

Timothy Bottoms makes a fine W., even though he looks more like Bush the elder than his son. Bottoms nails George as an intellectually challenged, yet earnest, guy who's trying as hard as he can to be an adequate authority figure. All he wants is for people to get along, his wife to not be pissed at him and to not have to think too hard. Poor George. He makes such a mess trying to make everybody happy, you end up feeling sorry for him. Which, I guess, sort of proves Parker and Stone's point about the transforming power of sitcoms.

Parker and Stone's spoofy format, however, is in danger of swiftly wearing out its welcome. Dopey sitcom clichés are fun to savage -- once. After a couple of episodes, you start to feel like you're watching the 12:30 a.m. "Saturday Night Live" skit that wouldn't end. Compared to "That's My Bush," "South Park" is a model of comic shapeliness and economy. And aren't Parker and Stone being just a tad snobby, lumping all sitcoms, the sly and the lame, together in their discard pile? Come on, everybody doesn't love Raymond, as viewers of that sharp and nasty show know.

But the first two episodes of "That's My Bush" do have some flashes of unvarnished political satire, and they're stunning in the way they use grotesque humor to suggest even more grotesque truths.

Bush as glib executioner is one such moment. The other is a jaw-dropping scene in the first episode where George is meeting the leaders of the pro- and anti-abortion rights movements, who have been invited to the White House for a "unity dinner." (Attention, spoilerphobes: I'm about to give something away.) The leader of the anti-abortion group is supposed to be a fetus that was aborted 30 years ago, but survived. Played by a shriveled animatronic puppet that sounds suspiciously like Cartman, the abortion that lived is one angry (and, oddly, horny) little dude; he goads people into feeling sorry for him because his underdeveloped eyes are sealed shut and because he has to shop at Baby Gap even though he's 30.

There will probably be a hue and cry over this "tasteless" character, who could be taken as a pointed comment on the "respect for life" displayed by those oh-so-tasteful oversized placards of aborted fetuses that some of Bush's pro-life supporters wave in front of women's health clinics. (Not that women on the pro-choice side are going to be overjoyed with their "That's My Bush" depiction as a bunch of fat, butch, lesbian feminists.)

But at least Parker and Stone are making an attempt to put some bite into their presidential sendup. Which is more than you can say about Will Ferrell's flat Bush impersonation on "Saturday Night Live."

Sitting presidents have always been recurring characters on "Saturday Night Live," which is now in its 26th season. (Ferrell's Bush notwithstanding, this is the show's most stingingly funny season in a long time.) Chevy Chase's Gerald Ford was one big pratfall. Dan Aykroyd's Jimmy Carter was an uneasily smiling rube. Phil Hartman's Ronald Reagan had a few brilliant moments when he'd drop the genial figurehead act and bark orders to his staff, frighteningly in charge.

Mostly, the "SNL" impersonations defanged the chief executives, making them seem harmless and goofy. And, finally, politicians realized the expedience of playing along and being a good sport; a star-struck imitator is more likely to pull punches. Case in point: Dana Carvey's benign, "read my lips" George Bush, the most superficial "SNL" president since Chase's Ford.

Darrell Hammond's Bill Clinton, however, was the first fully locked-and-loaded "SNL" presidential impersonation since Aykroyd's poignantly deranged Richard Nixon. With a priapic left thumb and a pouty lower lip, Hammond brilliantly and mercilessly captured Clinton's cockiness, his sexual charisma, his skill at looking abashed and his insatiable hunger for the spotlight.

As a politician of rare substance and rare folly, Clinton must have been a great character to play. And the prodigiously talented Hammond made him as large in parody as he is in life. Clinton is a tough act to follow; Hammond has had some great skits this year in which the ex-president refuses to yield the spotlight to his successor. (In one of them, Clinton cuts into Bush's televised post-inaugural address with a home-shopping show hawking presidential pardons and sex toys.)

Of course, it's not exactly grand theft to steal the spotlight from Ferrell's Bush. Sure, he does an eerie job of capturing the squint and the meanness around the thin lips. But his imitation, hanging on immaturity and verbal gaffes, is disappointingly lightweight compared to Bottoms'. To be fair, Bottoms has the advantage of context. When the "SNL" writers put Ferrell's Bush in a similar sitcom setting (an "Odd Couple" parody with fun-lovin' Bush and Hammond's stuffy Al Gore as mismatched White House roommates), he immediately gained focus. Like the real Bush during the presidential debates, he became the easy, breezy alternative to Gore's sober pointy-headedness.

But, listen, it's no coincidence that the best Bush parodies so far have been framed as spoofs of sitcoms. Even without "That's My Bush," George W. Bush would be a sitcom president, and not just because of the farcical way he gained office.

Network sitcoms want to unite, not divide. From the soppiest of them ("Growing Pains," "Diff'rent Strokes") to the most sophisticated ("Will & Grace," "Everybody Loves Raymond"), sitcoms represent an alternate universe where misunderstandings can be put right, differences can be negated and troubling issues can be overcome with some chuckles and well-worn truisms, all in less than 30 minutes. Welcome to the W. Show! You don't suppose there'll be a sweeps-week special where he wakes up in his old bed in the Texas Governor's Mansion and realizes that everything since Nov. 7 has been a dream, do you?