In France they call him "an idiot." In Germany they call him a "big bully." Forget China -- Europe could turn out to be President Bush's biggest foreign policy problem yet. 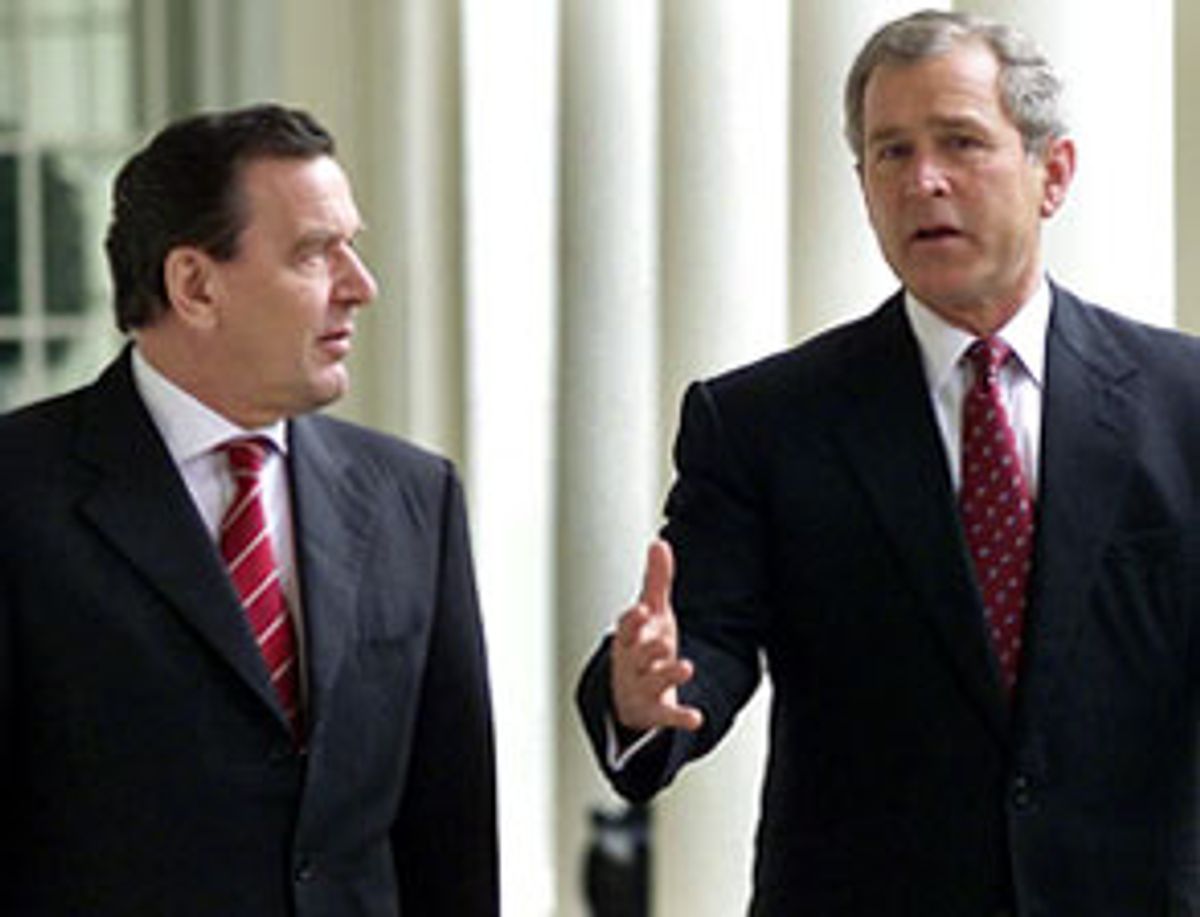 If the Bush administration ends up having to apologize to China, rather than see the Hainan Island standoff turn into a drawn-out international crisis, many in Europe will privately be cheering the American comeuppance.

Even as the potentially explosive situation has dragged on, and reaction in official Washington has been generally supportive of Bush and his foreign-policy team, there has been a notable lack of support from European leaders. That silence should not be ignored. It reflects genuine alarm over what is seen as a revival of Reagan-style unilateralism and high-handedness. No one should make the mistake, that is, of taking the new European anti-Americanism as the simple, shallow, knee-jerk sentiment of past years. This is something potentially more serious.

"The Americans and the Chinese are playing Cold War with each other, which is very strange," Dominique Moisi, a French political analyst, told the New York Times this week. "No one wants to support the Chinese. But they don't want to encourage the United States either. The silence is partly a measure of indifference and partly a measure of the embarrassment of the diplomatic elite."

Only a month ago, Bush shocked many here by essentially mocking European concern about global warming. The continuing calls from Europeans for a rethinking of the Bush team's rejection of the Kyoto targets on global warming attracted mostly snickers in Washington. But in Europe, the issue has proved galvanizing. It was not just that Bush flip-flopped on a campaign pledge to cut back on CO2 emissions, or even that he came out against the Kyoto Protocol on reducing greenhouse-gas emissions. It was his cavalier attitude. And the timing.

Even though many in his own administration favored a policy review before a statement was made on Kyoto, the Bush team seemed almost in a hurry to come out against Kyoto -- and made headlines by making the move on the very day that German Chancellor Gerhard Schroeder was due at the White House to discuss global warming. To European sensibilities this all reeked of needless provocation and caused considerable political damage. The impression came through loud and clear that this administration cares little what anyone else in the world thinks.

As the German daily Frankfurter Allgemeine Zeitung's environment editor, Joachim M|ller-Jung, wrote this week, with none of George W. Bush's love of brevity: "For just as it makes it absolutely clear just how far down on Mr. Bush's agenda environmental protection is, so it must seem like a slap in the face for all those who hoped that the end of the Cold War and the 1992 Earth Summit in Rio de Janeiro marked the dawn of not only a more peaceful, but also a more environment-friendly and ecologically sustainable world."

The issue of spying is also a sore point with Europeans. Outrage was widespread last year when details emerged on Echelon, a massive U.S. surveillance system operated by the National Security Agency. According to published reports, Echelon gives Americans the ability to monitor European phone calls, faxes and e-mails. Earlier this week, the European Parliament committee investigating Echelon held another of its hearings on the subject, and when it wraps up with a report, it's likely to generate more headlines and more distrust toward Americans.

Criticism of the new president in the British press has also been unrelenting. From the left-leaning Guardian to the Murdoch-owned London Times, Bush has taken more than his share of lumps from the British on everything from Kyoto to Korea.

"By simultaneously destabilizing global security in China, Korea, the Middle East and Russia, by recklessly abrogating the Kyoto climate change treaty, by bullying his allies in Europe and Asia, by pursuing a tax policy that will turn America into the most unequal society in modern history, George W. Bush is fully living up to my expectation that he would become the worst U.S. President since Herbert Hoover," writes the Times' Anatole Kaletsky.

No one questions the credentials of Bush's team of foreign-policy advisers, a group heavy on both experience and geopolitical acumen. But the generally high regard in which many in Europe hold former Joint Chiefs of Staff chairman Colin Powell led to disappointment and confusion at the way the secretary of state seemed short-circuited in recent weeks by other administration figures. Secretary of Defense Donald Rumsfeld wields considerable influence with the president, and Dick Cheney has the largest foreign-policy staff -- and probably the most power -- any vice president has had. Throw in national security adviser Condoleezza Rice, Bush's foreign-policy coach all through the election cycle, and it's easy to see how Powell could get lost in the shuffle.

If nothing else, the Hainan Island standoff seems to have brought Powell back to center stage, and to many who have watched the early weeks of Bush administration foreign policy, this comes as welcome news. Powell brings a worldliness to the administration lacking in other key administration officials, who seem to chart foreign policy chiefly in terms of domestic calculations.

Many in Europe were caught off guard by the emphatic Bush embrace of Israel, and his shying away from applying any real pressure on Ariel Sharon to move the peace process forward. What creates real confusion is the almost flippant way in which major issues are discussed. When Bush met with Egyptian President Hosni Mubarak at the White House on Monday, he insisted to reporters afterward that, contrary to what critics might charge, he is very involved with Middle East politics. After all, Bush said, he had just been talking about it with his visitor! The tin ear for how this sounds to Europeans and other foreigners guarantees that the over-the-top and sometimes unfair mockery -- especially in France -- of the current chief executive as "an idiot" will continue.

So who cares? Why does it matter to Americans if many in Europe, including political and opinion leaders, see the United States veering toward a kind of political isolation? Because the competition that matters in the post-Cold War world is economic competition -- and Europe remains a potential rival. According to figures provided by the European Central Bank, the countries of the Euro Zone last year accounted for 16.2 percent of the world's gross domestic product. That's shy of the U.S. percentage of 21.9 -- but not by much.

As of now, few investors prefer the euro to the dollar as a safe haven. But that could change. And with growing economic autonomy, Europe can be expected to develop more of a willingness to go its own way diplomatically. Russian President Vladimir Putin was energetically courting Schroeder and other European leaders long before the Bush team raised eyebrows with its expulsion of 50 alleged Russian spies. The courtship paid off when European leaders offered Putin immediate political support after the tit-for-tat spy expulsions. Watch for this relationship to continue to grow in ways confounding to the Americans -- especially if private talks between Russia and Germany bear fruit on the topic of Germany reclaiming at least partial hegemony over its former territory of Koenigsberg, known since 1946 as Kaliningrad.

After the disturbing events of the past week, the Bush foreign policy team may be forced to adopt a more conciliatory stance toward China. But it is far from certain whether Bush and his advisors will come to appreciate how deeply they have stirred the pot of anti-American resentment among our European allies.