After a life custom-made for cable catharsis, the force behind the Beach Boys is now being honored even for things he didn't do. Does that card ever expire? 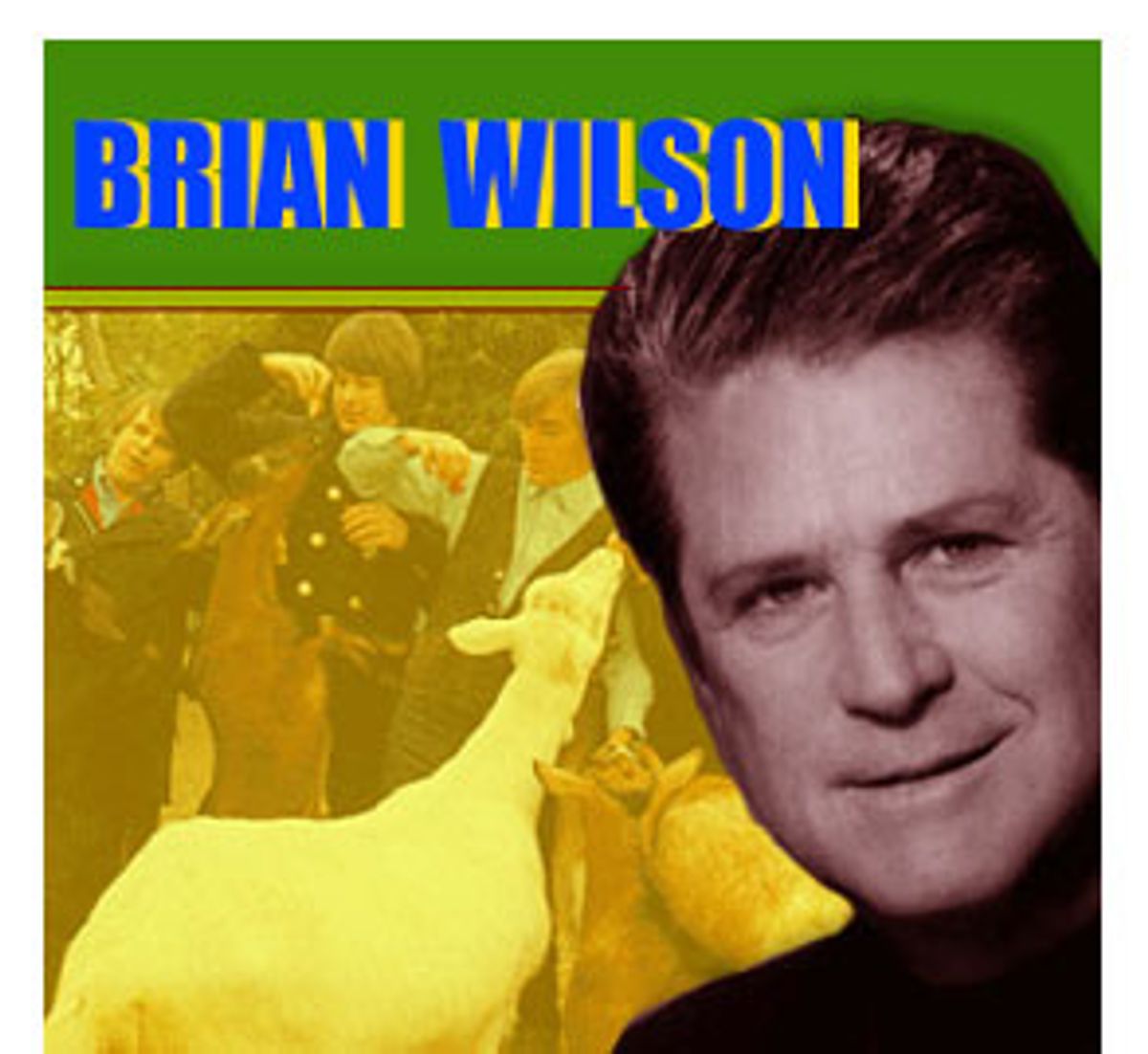 At the Brian Wilson tribute concert in New York in March, a short film explained that Wilson had lived his whole life in fear and casually mentioned his "untreated mental illness." A parade of pop music scholars -- led by host Chazz Palminteri, who said that he both heard and liked the Beach Boys' records as a youth in the Bronx 'hood, and including Beatles producer Sir George Martin, '60s survivor Dennis Hopper, Rod Stewart survivor Rachel Hunter and '70s romantic Cameron Crowe -- delivered familiar pieties about Wilson's groundbreaking work more than 30 years ago. Were Dean Martin roasts ever this harsh?

As tributes go, this concert staged for television -- TNT will broadcast some of it on that most Beach Boys-like (not to mention James Watt-est) of days, the Fourth of July -- primarily succeeded in making Wilson seem less than the genius so many enthusiastically proclaimed him to be.

Focusing on him as a songwriter rather than as a studio auteur was a self-defeating exercise. To prove it, Paul Simon, Elton John, Vince Gill, Billy Joel and others grappled with tunes inextricable from their original studio incarnations. That the back-in-action Go-Go's rocked up "Surf City" and "Little Honda" like enthusiastic new lovers only proved the degree to which California punk-poppers have internalized the Beach Boys. And as anyone who doesn't look down on the Beach Boys as a '60s novelty knows, those aren't the songs Wilson deserves to be remembered for.

His legacy properly rests on innovative landmarks like "Surf's Up" and "Good Vibrations," which was oddly handed over to the Wilson sisters -- Ann and Nancy of Heart -- and opera singer Jubilant Sykes. In his introduction, Sir George suggested that the song, with its discontinuous complexity and harmonic sophistication, was all but unperformable.

Perhaps he was unaware that the Beach Boys (and lesser bands armed with no more than a few true singers and a theremin) long ago put paid to the belief that Wilson's 3:35 studio gem had permanently relocated his creativity outside the reach of the kind of rock 'n' roll that's so simple any half-wit could play it. Even the stars of "Barracuda" and "Magic Man" -- aided immeasurably by Wilson's nonpareil touring band, an augmented incarnation of Los Angeles' Wondermints, which played all of the songs with finesse and respect and provided the requisite harmonies -- were able to hang on, at least until Ann's ill-advised rock improv at the end.

Wilson's greatest achievements came not at the keyboard, where he composed his achingly beautiful melodies, but in the studio, where a guileless young man in his 20s, driven by faith in what he could hear in his head, believed that his future, and maybe that of all pop music, lay beyond three-chord odes to cars or girls. Brian took received wisdom -- catchy tunes, sweet harmonies, teen-dream lyrics -- and set sail beyond the horizon of AM haikus for music of greater ambition and no less appeal. That's not an easy idea to convey at an all-star tribute, and certainly not one "Help Me Rhonda" ruiner Ricky Martin could explain with his windup pelvis. Wilson clearly envisioned his creations as sounds more than structures -- which explains their occasional lapses in logic as well as his inability to keep pace with the master craftsmen who followed his lead. (Todd Rundgren's effortless-sounding re-creations of "Good Vibrations" and "Strawberry Fields Forever" on his "Faithful" album underscore the acceleration of studio facility in a single decade.)

The concert's centerpiece -- a complete performance of the wonderful "Pet Sounds" by Wilson and a procession of stars, many of whom turned in sensitive, heartfelt performances -- dismantled the artistically advanced and arguably cohesive album (God only knows how the resigned alienation of "I Just Wasn't Made for These Times" can be understood to cohere with the Caribbean sailing misadventure "Sloop John B" or the pimply sexual longing of "Wouldn't It Be Nice") into a carelessly assembled K-Tel concert anthology of awkwardly juxtaposed singles.

What's more, only Wilson -- controlled and functional but still unnervingly remote at 58, an unblinking survivor retracing familiar steps -- himself had the presence of mind and humility to acknowledge the true provenance of the songs for which he was being compared to Mozart. He singled out "Pet Sounds" lyricist Tony Asher and Van Dyke Parks (coauthor of "Heroes and Villains," the poetic-sounding nonsense words of "Surf's Up" and one of the five men behind "Sail on Sailor") in the audience and thanked them. But he also left many debts unpaid, not the least of them to conspicuously unrepresented former bandmates, including his late brothers Dennis and Carl (who got a dedication for dying but less credit for living). And just because right-wing transcendental-meditator/creep singer Mike Love had to go to court in 1992 to establish his contributions to the Beach Boys oeuvre doesn't mean he didn't make them. (Actually, there was never any disagreement that Love co-wrote "Little Honda," "Darlin'," "Fun, Fun, Fun," "Don't Worry Baby," "The Warmth of the Sun," "Wild Honey" and the words he and Carl Wilson sang in "Good Vibrations." The lawsuit he won against Brian Wilson established his rights in 29 others.)

It's typical of tributes in which enthusiasm overshadows facts that a songwriter with no shortage of estimable compositions should be feted with songs he didn't write. At one point in the show, David Crosby took two tries to complete an awkward rendition of "Sloop John B," a folk ballad the group recorded but laid no claim to authorship of. "Barbara Ann," which served as one of the all-star encores, was a hit for the Bronx's own Regents in 1961, well before the Beach Boys ever heard themselves on the radio. Then there's "Surfin' U.S.A.," which might as well be a cover. (In "Heroes & Villains: The True Story of the Beach Boys," Steven Gaines claims that Wilson and Love borrowed the lyrical idea of a Chubby Checker hit and the music of Chuck Berry's "Sweet Little 16"; the song's joint credits were only formalized after Berry's camp sued.)

But who really cares about such music-nerd trivia? With creative evaluation being increasingly elbowed out by thoughtless consensus in our post-critical celebrity era -- box-office stats, chart positions, magazine covers and awards shows mean far more than the individual musings of effete intellectuals -- public interest in nit-picking career details is no match for juicy personal details. Blame is banished in victim culture, and the cost for screwing up a life, whether one's own or someone else's, is no more than a cursory mea culpa for a misbegotten past, no matter how recent it may have been. (Calling Leif Garrett ...)

With that, life itself becomes the all-purpose excuse for lapses in artistry. Like the media-ready high school students who fill our screens with pithy sound bites every time TV cameras arrive at the scene of a shooting, the glossed-over simplification of "Behind the Music" is now a blueprint for popular redemption. Brian Wilson's story is custom-made for cable catharsis -- the bloated, bedridden burnout who sacrificed his soul to create his teenage symphonies to God and became a serial victim of drug-fueled psychosis, charlatans and thieves, all of it traceable to the spiteful dad-manager who deafened his ear, undercut his confidence and then sold off his songs. But a sad story with a happy ending hardly mirrors the arc of Wilson's work.

Like many of his surviving contemporaries, Wilson's 40-year career yielded timeless work only in its first decade. Even at top form, crafting the songs that made the Beach Boys "America's Band," he wasn't infallible. And then came the maudlin, weird and frequently embarrassing results of mental, physical and emotional stress. (It should be acknowledged, however, that there actually are people who play "The Beach Boys Love You," the 1977 album that contains Wilson's ridiculous ode to Johnny Carson, for enjoyment.) His sporadic releases over the past 20 years were only imitations of what we knew he could do, and the tribute concert reflected that, proffering only two songs written since the early '70: the sincere but ungainly memorial "Lay Down Burden" and the concert's coda, a solo rendition of 1988's almost-great "Love and Mercy."

Not to drown in semantics, but genius can't be such a fleeting gift. Do we now need to edit and excuse to safely recognize the demeaned idols of our time? J.D. Salinger, Joseph Mitchell and Ralph Ellison also peaked early, but they just stopped cold and so fixed their legends in ice. People never do that in the eternal world of pop music, not unless they lose their minds or their lives. With its hacks, has-beens and one-hit wonders, rock 'n' roll happily consigns the no longer creative to recycle past glories on the oldies circuit, and can only forgive the self-deluded efforts of the once great so long as they don't stop playing their hits. Pete Townshend of the currently reunited Who -- which recorded its superfluous final album in 1982 and has been making rumblings about doing another -- wrote earlier this year, "I have not discovered a single 'perfect' Who song in any of my trawlings through my old stuff or recent stuff." Thank goodness for "My Generation."

In fact, it's probably better for most of the old-timers if they keep their creativity under a basket. (Not Bob Dylan and Neil Young, however -- they can keep going forever as far as I'm concerned.) Increasingly distant achievements can't keep a reputation aloft in the face of mounting evidence to the contrary. The eminence of "God Only Knows," "In My Room" and "Caroline, No" buys a lot of goodwill, but turning a blind eye to subsequent entries in the failure column only diminishes popular music's claims to enduring significance. Right now, up in Palminteri's Bronx, Chuck Knoblauch -- the Yankees' millionaire infielder who lost the ability to hit the side of a barn last year -- is being cheered every time he doesn't boot a routine play in his safer reposting to left field. The diminished expectations that now coddle Wilson have led to an equally condescending miscalculation of his past.

Palminteri mentioned that it wasn't cool to like the Beach Boys back in the day, but he didn't explain why. Before Wilson turned inward, their wimpy idealism overshadowed the joy of their sound. Rock was the voice of anger, angst and rebellion while surf music was the quintessence of good times. (Even Wilson's adaptation of the full-throated Phil Spector production style took it from tense drama to ebullient release.) Wilson's artistic stature improved as his life fell apart; he was a surviving victim of rock 'n' roll whose body somehow outlasted his mind. In a twisted way, Brian's troubles -- which also led to darker, more revealing songs -- made his achievements more profound and went a long way to counter the awfulness of what his "Kokomo"-singing Disneyized bandmates got up to in his absence. In hindsight, it was easier to appreciate the group's records if they could be viewed as the work of a solitary demented genius battling untold forces arrayed against him. In the process, Wilson came to singly embody all that was good about the Beach Boys, from start to finish. Their work became his work, which reduced the others to tag-alongs or, worse, hindrances out to stymie his muse. Wilson indisputably had the vision, conviction and sonic imagination. He was primarily, by a large margin, responsible for both the group's existence and its importance. But he clearly didn't do it alone.