Is Ken Griffey Jr. past his prime?

His slipping stats raise questions about whether he's really baseball's best. Plus: Remembering Willie Stargell, who let us know the sheer joy of being a big-league ballplayer. 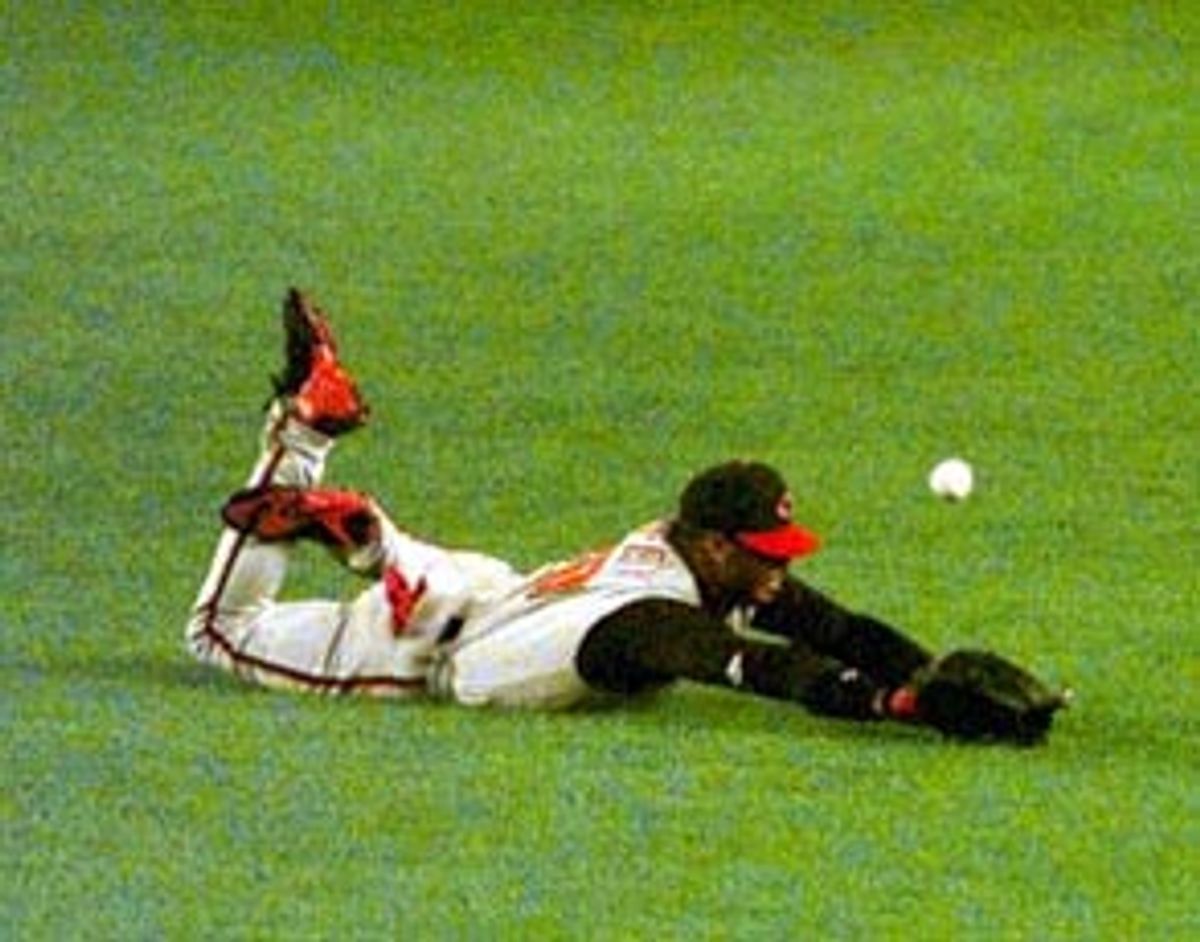 Just a couple of short years ago, it was simply assumed by most fans and by a great many knowledgeable baseball people that Ken Griffey Jr. was the best player in the game. I'm curious: Do you know anyone who still feels that way? I don't.

It's not as if the baseball people I talk to go around saying, "Whatever happened to Ken Griffey Jr.?" It's not like anyone comes out and says he isn't the best, and I suppose some people still feel that he is. But you don't hear people say it as much anymore -- it is no longer the automatic response it was three or four or even two years ago.

Now, many of the same people who once picked Griffey will say, a bit grudgingly, "Alex Rodriguez, maybe, or Barry Bonds" (the man who was generally the unofficial pick before Griffey reached his peak), or, the thinking man's response, "Pudge Rodriguez." And the funny thing is that most people haven't even noticed this yet.

Ken Griffey Jr. is playing with a hamstring injury right now. It looks as if he'll be back in a few days. It won't be too late for him to get off to a fast start, but it's more and more important that he do so. If he doesn't, the hometown fans, from whom we heard some grumbling last year, may start to boo. And if they do, there's a more than fair possibility that Junior, who does not have the thickest of skins, will not react well, and there is nowhere that situation can lead to that is good. Nothing is worse for your legend than getting booed out of your own hometown.

Let's not rush ahead on this. There is plenty of time for Griffey to turn things around -- and it must be admitted that any season highlighted by 40 home runs and 118 runs batted in, Griffey's numbers in 2000, doesn't need much turning around. It's just that, well, how to say it ... Junior doesn't look super anymore. He is 31 right now, and won't turn 32 until the season is over. He should be at his peak. He should have been at his peak last year. But he wasn't, not quite. His .271 batting average was the lowest since his rookie season 12 years ago. Six stolen bases (in 10 attempts, for a hardly-worth-it percentage of 60 percent) was his worst performance ever, not counting 1995 when he missed more than half his games because of injury. For that matter, the 40 home runs was his lowest total (again, excepting '95) since 1992.

Am I nitpicking? If so, let me get all the nits out in the open. First, Ken Griffey's career batting average has now dipped under .300 (.296). This is not unusual in a great ballplayer; Barry Bonds, for instance, is at .290 for his career. But Bonds was never a high-average hitter; his forte was reaching base with power (his on-base average is 31 points higher than Griffey's.) But that's not really the point; the point is that as he has reached his peak years, Ken Griffey's average has dropped. Last year, it dropped 14 points. In fact, he has now, after hitting over .300 in six of his first seven seasons (falling short only in the injury season of '95), failed to hit over .300 for three straight seasons. He is still a fine centerfielder, but his range factor has declined slightly over the last three years and his errors have increased slightly. Most alarmingly, his slugging average has dropped, and steadily: From a league-leading .646 in '97, he has dipped to .611, .576, and last year, .556. That's 35, 35, and 20 points. You may see no cause for alarm, but suppose he were to drop another 20-35 points this year?

What seems to be happening to Griffey is that his "peripheral" skills, the ability to beat out the infield hit, the burst of speed to catch the occasional soft fly in front of him, the jump required to steal a base in a tough situation, are all eroding -- and rapidly -- leaving only Ken Griffey Jr., the home run hitter, in front of the public eye. Or, stated another way, he is playing five or six years older than he is. That may not make any difference so far as reaching Aaron's home run total off 755, but a couple of years ago he seemed capable of that and so much more. It really did seem as if we were watching the heir to Babe Ruth's and Willie Mays' unofficial titles of Greatest Player, and, perhaps, a living, breathing candidate for the title of Greatest Player in Baseball History. Now, that is slipping away, for reasons that just don't seem clear. Now we're left wondering if he's going to be better at age 35 than his dad was.

My favorite memory of Pittsburgh Pirates slugger Willie Stargell, who died on Monday at age 61, was a game late in his career -- I can no longer recall against who -- when his teammate at bat missed the pitch on an ill-advised hit-and-run play. Willie, who was breaking for second, was about to be tagged out by yards. As he approached the base, he stopped, turned to the ump, and signaled for time out like at a football game. The ump and the opposing shortstop and second baseman all froze and dropped their jaws, at which Stargell went down on his knees and burst into laughter.

No one, not even Ernie Banks, communicated the sheer joy of what it was like to be a big-league ballplayer the way Wilver Dornet Stargell did. I was in Atlanta in 1969 when he hit that 500-foot upper-deck home run, the second longest (after Willie McCovey's the same year) in the history of the park. The Braves' fans gave him a standing ovation; Stargell responded by tipping his cap as he rounded third, but also by shrugging and shaking his head as if to say, "Folks, don't ask me, 'cause I got no idea how I did that."

My favorite Willie Stargell story came from Marvin Miller, the man who founded the Major League Baseball Player's Association. During the '72 strike, Miller recalled, Willie took the opportunity during a break in negotiations to tell him, "Man, I don't know how you keep your temper when they talk all that trash. Where I come from, someone talks like that, you start flipping tables."

"I decided," says Miller, "to have some fun. I said, 'Willie, I have to be restrained. You don't. Feel free to speak your mind. In fact, I'd love to see you do it.' Stargell went back in and began shaking his finger in the face of their [management's] negotiators. At one point, he stood up, reached across the desk and did it. I swear, it had an effect. I could almost date the moment at which the owners began to wilt, and it was the day Willie Stargell began to cut loose."

I'll let Roger Angell's tribute stand: "the most admired and admirable player of his time."