David Spade is a redneck with heart, but he can't pull a movie out of acid-washed jeans and a mullet. 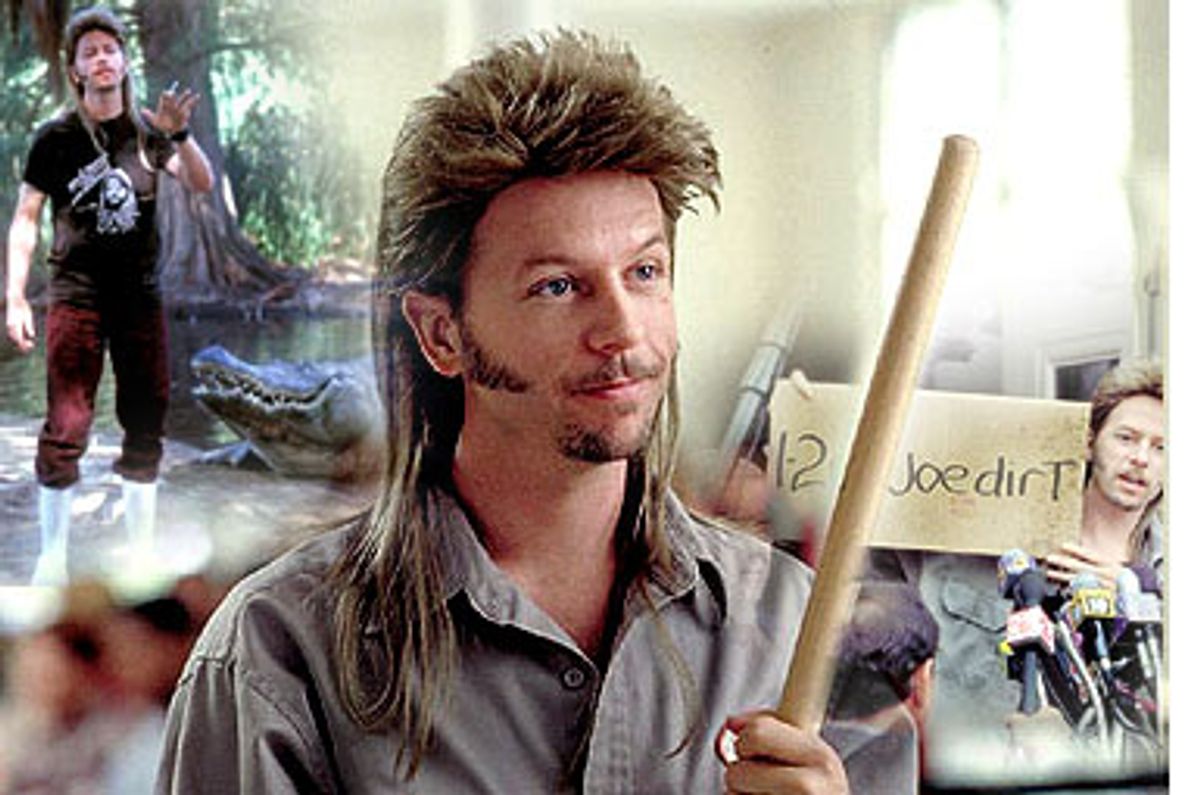 I've never owned a muscle car or a Skynyrd album; nor has my face ever been adorned with any facial hair resembling patches of muskrat fur. But like any red-blooded (or even blue-blooded) American male, part of me wants to have done those things. This widespread desire for white-trash authenticity is what makes the character and concept of "Joe Dirt" so appealing, and also what makes it so disappointing that the movie is just another sub-Farrelly-brothers collection of miscellaneous gags.

Certainly the opening to the film, when we see David Spade's mustachioed mug in close-up, mouthing the "Turn it up" at the beginning of "Sweet Home Alabama" and hitting the road in a savaged Barracuda (I believe) with a chain-link steering wheel, a car that has surely blown numerous head gaskets, promises great things. Spade's mullet-wearin', Def Leppard-lovin' Joe is a comic naif of a variety that goes back to Charlie Chaplin (actually, much further than that). He burns rubber, he loves to party, he was born to rock 'n' roll, he choked Linda Lovelace -- or so one of his T-shirts proclaims -- but Joe is essentially a sweetheart, a clueless American optimist searching for love and acceptance. When a man with a thick Southern accent tries to tell him that "home is where you make it," Joe thinks he's saying he likes to see homos naked. Even so, he's not horrified; Joe isn't the judgmental type.

Joe's such an enjoyable and sympathetic creation, green acid-washed jeans and all, that I wish Spade (who wrote the screenplay with Fred Wolf) and Gordon had given him more interesting things to do. Officially, the plot of "Joe Dirt" involves Joe's search for his parents, who abandoned him at the Grand Canyon when he was 8. But as usual in this kind of movie, the narrative is no more than an excuse for some haphazard (and largely unfunny) adventures, which tend to conclude with Joe beaten up and/or covered with crap. Such talented performers as Christopher Walken and Rosanna Arquette come and go, for instance (as a mobster in hiding and alligator-wrestling impresario, respectively), making little impression on the movie but leaving behind the slight odor of show-biz careers in decay.

On the other hand, Dennis Miller -- whom I generally dislike -- is perfectly cast as the smartass L.A. DJ ("all aberration radio, all the time") who discovers Joe working as a janitor at his station and broadcasts his pathetic tale to the world. You get the feeling Miller and Spade chucked the script for these scenes and just sat around tossing zingers at each other (Miller: "So, you dig looking like Jane Fonda in 'Klute'?"); this slow-moving, mild-mannered movie could have done with more such improvisational zip. Brittany Daniel (a cast member of "Dawson's Creek" last season) agreeably plays the honey-blond eyeful who can't get bashful Joe to see how much she likes him. The less said about rapper Kid Rock's performance as the Trans Am-driving jerk competing for her affections, however, the better. (Combine the awkward earnestness of, say, Jon Bon Jovi with that strange who-farted expression that's always playing across the features of George W. Bush.)

Neither Spade nor Gordon -- a longtime TV director whose credits include episodes of "Ally McBeal" and "The Practice" -- nor executive producer Adam Sandler nor anybody else bothered to make "Joe Dirt" more than sketch comedy, and really why should they bother? The movie's just about funny enough to play well for a couple of weeks and turn a profit in video and pay-per-view. But Joe Dirt himself is bigger and more original than the creaky blend of mean-spirited laffs and sentimentality around him. In the hands of, say, "Beavis and Butt-head" creator Mike Judge, or "Rushmore" creators Wes Anderson and Owen Wilson (and what happened to those guys, anyway?) he coulda been a contender.