"Josie and the Pussycats"

The latest cartoon-to-screen spoof finds the rock-chick band taking on the music industry. 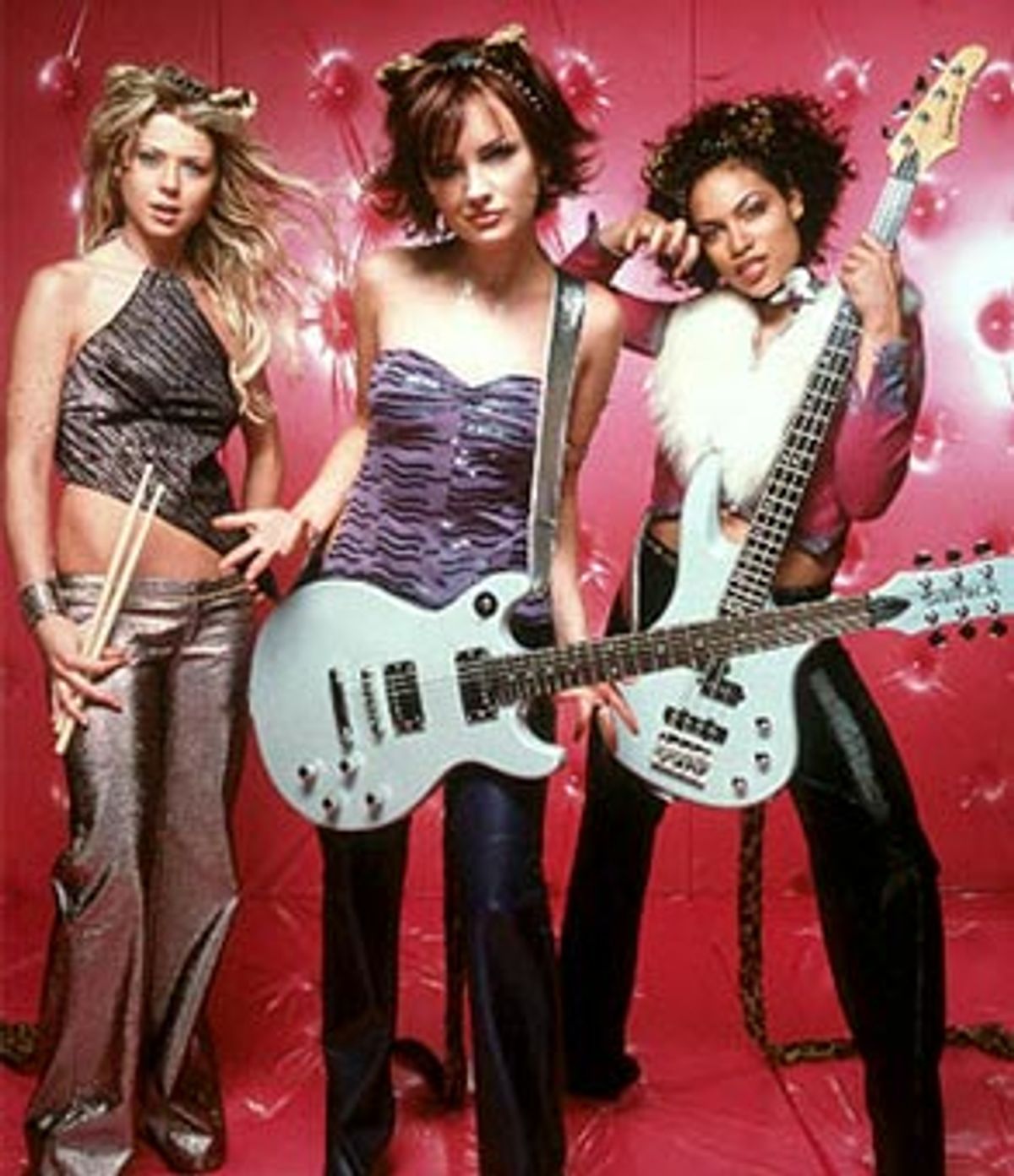 In a world packed with disposable pop culture, some of it worth your time but plenty of it not, you have to take it as a good sign when filmmakers adapt a comic book or a cartoon TV show with a degree of intelligence and care. "Josie and the Pussycats," a live-action riff on the "Archie"-spinoff comic book and TV show, manages to straddle the middle, like a rock chick who has just gotten her first guitar and hasn't yet figured out the natural way to stand. Unfortunately, it doesn't hold up all the way through. A spoof on the crass commercialism of the music industry, the picture founders when it becomes clear that it's not going to shoot beyond its own flashiness and bold, brash self-promotion.

That it's a movie-length commercial for itself is part of the joke. At the same time, though, if it doesn't want to make you run out and buy the girls' clothes, then what good is it? "Josie and the Pussycats" would be more fun if it were either more shameless or more principled in the bad-girl way, taking a stance on the value of artistry and attitude over commerce. It's not sure whether to celebrate pose and posture or to denigrate them, and it would be a better movie if it would just bust out of the gate either way.

That said, though, it has its moments of being damned entertaining. Written and directed by Harry Elfont and Deborah Kaplan, based on characters conceived by Dan DeCarlo for the comic book and early-'70s cartoon show, the picture tells the story of the meteoric rise of Josie (Rachael Leigh Cook), Melody (Tara Reid) and Valerie (Rosario Dawson) from Joan Jett-ish garage rockers (they play a gig at their local Riverdale bowling alley, where everyone ignores them) to arena-rock superstars. What they don't realize is that they're part of a government plot, executed by evil henchpersons Wyatt Frame (Alan Cumming) and Fiona (Parker Posey, appearing in an array of outlandish outfits, including a collar fashioned out of ostrich feathers that bob woozily around her face on long, slender wires), to embed subliminal messages into pop music, thus boosting the economy by brainwashing kids into buying more stuff.

The premise kicks the door wide open for plenty of pop-culture jokes as well as lots of self-referential noodling, and some of the gags are choice. "Josie and the Pussycats" has a magnificent opening: A gaggle of screaming preteen girls has shown up at the airport to greet their idols, a white-boy singing sensation deliciously named DuJour, who proceed to lip-sync their way through their No. 1 hit (the intriguingly named "Backdoor Lover") right there on the tarmac. (One of the DuJourites is Seth Green, laying down the baggy-pants pseudo-homey shtick with great relish, in a feather boa no less.) Cumming's devilish Wyatt has a selection of secret code messages that he phones back to headquarters when necessary; when he spots a teenage freethinker who refuses to succumb to the implanted messages, he pops open his cellphone and barks out, "Smells like teen spirit," which summons a van in which the young whippersnapper is summarily spirited away.

Cook, Reid and Dawson make appealing Pussycats, although in movies like "American Pie," Reid has already proved that she doesn't need to play the stock dizzy blond who loves puppies and flowers and hugs. Still, it's a fun, flimsy performance, and I defy you not to laugh when she flashes her huge baby blues and announces, "If I could go back in time, I'd wanna meet Snoopy."

Some of the smartass in jokes and wicked winks fall flat. Carson Daly appears as himself, in an ill-conceived sequence in which he and Reid (his fiancée in real life) go at each other in hand-to-hand combat. And the normally hilarious Posey, her crazy outfits notwithstanding, gives a performance that feels too grounded: Her interplanetary cosmic timing is simply broadly cartoony here.

The frustrating thing about "Josie and the Pussycats" is that even though the girls finally realize they don't want to be pawns in the big-business music game, they never return to their garage roots, and that was the time they looked their best, in their ripped T-shirts, chain belts and messy mascara. Through most of the movie, they're wearing skimpy, glittery clothes that show their bodies off beautifully but also reduce them to ordinary celebrities instead of groovy girl rockers with minds, and wardrobes, of their own.

The consolation prize is that, thanks to pop songstress extraordinaire Kay Hanley (formerly of the Boston band Letters to Cleo), the mastermind behind the movie's songs, "Josie and the Pussycats" sounds great. You may not walk out wanting to buy the boringly glam clothes. But girl-pop fans might find themselves drawn to their local record store in search of the soundtrack, no subliminal messages needed. It won't be the devil who makes you buy it -- it's those guitars and Marshall stacks.