The Chinese get what sounds like an apology, and President Bush gets a resolution that silences the right -- for now. 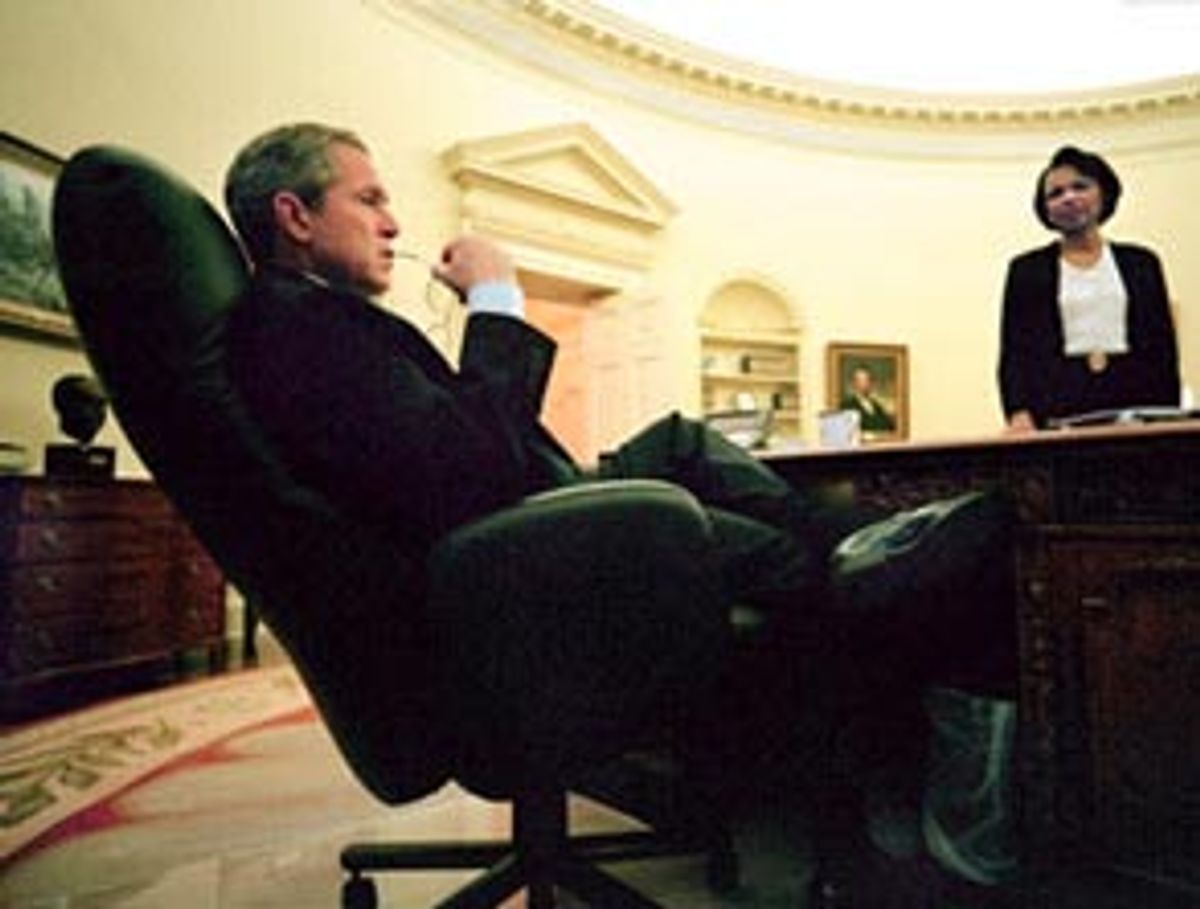 In the end, the resolution of the spy plane standoff hinged on semantics -- the use of language that would politically appease both Americans and Chinese, and keep from bruising either a sensitive superpower with a new president, or a rising Asian nation long attuned to slights to its pride and dignity.

U.S. Ambassador to China Joseph Prueher sent a letter Tuesday night to Chinese Foreign Minister Tang Jiaxuan expressing "sincere regret" over the loss of a Chinese pilot and stating that the U.S. is "very sorry" for entering Chinese airspace and making an emergency landing on Hainan Island "without verbal clearance." The missive also asked Beijing to "please convey to the Chinese people and to the family of pilot Wang Wei that we are very sorry for their loss." Beijing leaders responded positively to the letter, which provided it with a way out of an increasingly messy diplomatic crisis with the country that holds the linchpin to China's plans for economic growth.

Though the letter stopped short of a full apology, which the U.S. did not want to give, it did indicate that the U.S. was "very sorry" for the death of Wang and the emergency landing, using the term baoqian. That's more casual than "zhengshi daoqian," the equivalent of a formal apology, which Chinese President Jiang Zemin had sought, but baoqian implies enough U.S. responsibility for the incident to satisfy hardliners, linguistic experts say.

"The key phrase in English, 'very sorry for entering China's airspace,' leaves just barely ambiguous the question of fault, but the Chinese baoqian is not similarly ambiguous," says Princeton Professor of Chinese Perry Link, who edited "The Tiananmen Papers" earlier this year. "Both governments can run with their respective spins, but in language the Chinese side has done somewhat better."

According to prominent Chinese literary translator Zhu Hong, who is also a professor of Chinese Literature at Boston University, although baoqian is not the most formal for of apology in the Chinese language, it is the second most serious form of expressing regret or articulating feeling apologetic. Zhu says that in the context of the diplomatic crisis with China, use of baoqian in the ambassador's letter would imply enough U.S. responsibility to be an acceptable form of apology, and allow Chinese leaders to sway public opinion and hardliners.

In a statement issued Wednesday, Chinese Foreign Ministry spokesman Chen Ci said: "Since the U.S. government has already said 'very sorry' to the Chinese people, the Chinese government has, out of humanitarian considerations, decided to allow the 24 people from the U.S. spy plane to leave after completion of the necessary procedures." But Chen also added that "this is not the conclusion of the case."

Though the matter of recovering the spy plane remains unresolved, the letter effectively ended the diplomatic impasse between the two countries, and within hours, a chartered Continental Airlines 737 was en route from Guam to pick up the detainees.

The resolution came none too soon for President Bush, who was facing an uprising on his right over his comparative caution in dealing with the stalemate. The chorus of conservative critics gained in volume over the last several days, with Rep. Henry Hyde, former presidential candidate Gary Bauer and a growing number of rightist pundits charging that Bush was too soft in what Hyde and others alleged was a "hostage" situation -- a term the Bush administration pointedly refused to use. Hard-liners began calling for sanctions against China, including yanking the U.S. ambassador, cutting trade ties and blocking China's entry into the World Trade Organization or its bid to host the Olympics.

But on Wednesday key Republicans praised the resolution of the crisis. "Everybody knows we were very limited in our options," says Sen. Chuck Hagel, R-Neb., a member of both the Senate Committee on Foreign Relations and its Subcommittee on East Asian and Pacific Affairs. "I think it [the letter] is fine. Obviously, we've got some diplomatic doubletalk in there, but that's to be expected in this business. Overall, it's probably as good as we could have gotten here, at least in regards to the short term.

"The Chinese were holding a lot of the cards -- the cards being 24 of our crew members," Hagel continued. "In the end, were we going to exacerbate an already delicate problem here by hardening lines on both sides? Driving both sides further and further apart? With an endgame that would be more and more unattractive?

"Let's be honest here, the Chinese had us over a barrel on this thing. I was just talking to a constituent, and he said that we should have been tougher, and I asked him, 'Where do you want to start? With tactical nuclear missiles? Bombarding Hainan island with the Seventh Fleet?'"

The abrupt turnabout on China was striking considering that only a day earlier, Bush had to defend himself to the American public and conservatives during a press conference. "Diplomacy sometimes takes a little longer than people would like," Bush told reporters.

For days, the Chinese had been demanding an "apology" from the U.S. for its role in the accident. Over the weekend, both Bush and Secretary of State Colin Powell expressed regret and sorrow for the apparent death of Chinese fighter pilot Wang Wei, but refused to apologize for the incident. In fact, it had strong reasons not to -- Pentagon sources revealed Tuesday that just before the crash, the Chinese jet had come within three feet of striking the American surveillance plane.

The Chinese have been engaging in the practice of tailgating American planes with increasing frequency during the past several months. The accident occurred over waters that are observed by most countries of the world as international waters, and if the Chinese jets hadn't been intercepting the American craft, the accident wouldn't have happened. So there was little for the Bush administration to do but express regret that the accident occurred or that lives were lost.

While polls showed Americans supported the president's handling of the crisis, there were also signs that public resentment against China had begun to build. Wednesday the New York Times reported Wednesday that Kmart had been inundated with thousands of calls from consumers asking the company to boycott products made in China because of the standoff. "Our customers are telling us to quit doing business in China -- that they're not going to buy things made there anymore, " Kmart vice president Dale Apley was quoted as saying in the Times.

Once the immediate crisis was resolved, some conservatives praised Bush's stance, with the benefit of hindsight. Arthur Waldron, director of Asian studies at the American Enterprise Institute, says the most important turning point in the stalemate was not Bush's offer of regret, but his refusal to offer more than that. "If they [China] had been getting concessions, they would have kept holding on to [the crewmembers]. When Americans were getting mad, Asian countries weren't lining up behind them [the Chinese], and they felt that their chance at the Olympics might be threatened, they just didn't want those hostages anymore. They took Bush's statement, dropped some modifiers and subordinate clauses, and spun it their way."

Nonetheless, this won't be Bush's last dispute with the Chinese. Several crucial outstanding matters still remain unresolved in our diplomatic relations, including the recent detention of American academics in China and the pending sale of arms by the U.S. to Taiwan.

"I'm more worried by the Chinese arrests of American scholars than I was about this," offers AEI's Waldron. "The plane and the detention of the crew, that was an accident. These arrests are a considered policy, targeting people who had not been previously targeted. Those detentions had been pushed out of the headlines, but I think that they are going to bubble back to the surface now."

"I do believe the Chinese have mishandled this, and they will suffer some consequences in the Congress as result of that, in five specific areas: trade, the Taiwanese arms package, an arms embargo and Olympic resolution, and both cultural and military-to-military exchanges.

"We're not through with this. When Congress reconvenes after recess, you're going to see resolutions, press conferences, etc. Especially if the Chinese continue to play games with the matter of our getting the plane back -- which I suspect they will. You'll see a rather significant deterioration of our relationship with the Chinese over the next few weeks. And the longer they play games with that plane, the worse they're going to make it."