He was there when rock was a baby, playing his red guitar next to Gene Vincent and Jayne Mansfield. Last week he moved on -- to rockabilly heaven. 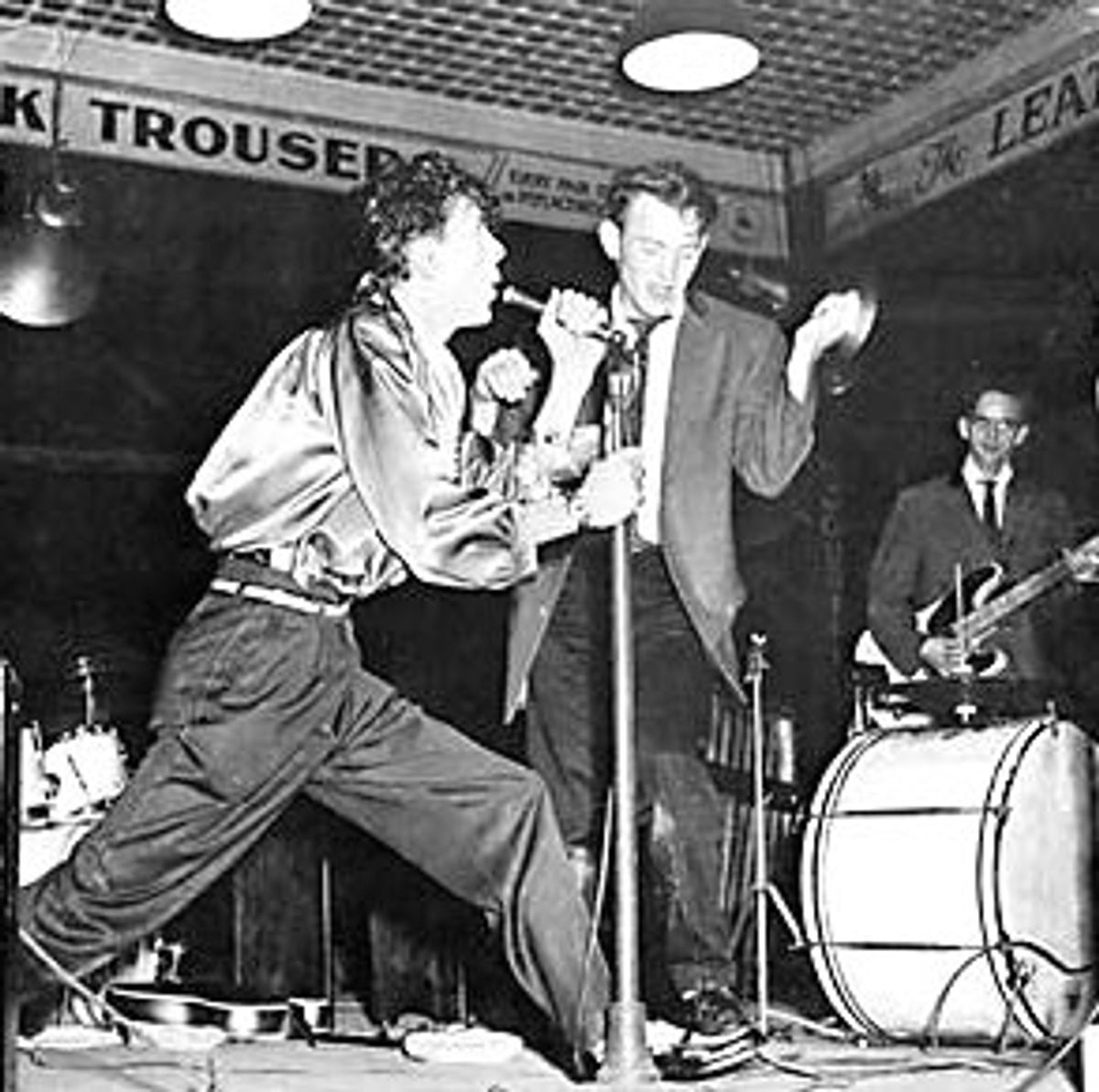 You probably don't know Paul Peek, but if you do, chances are you've seen him but never knew his name. I'm talking to a small group here, but if you can picture the scene in the classic early rock 'n' roll movie "The Girl Can't Help It" where Gene Vincent and His Blue Caps run through their hit "Be-Bop-A-Lula" in the Beaux Arts Rehearsal Hall, Paul Peek is off to the right, playing a red guitar, chewing gum and squinting and grinning and just about stealing the scene from Vincent, the star with the crazy legs who, for two minutes and 31 seconds in the summer of 1956, was almost as big as Elvis.

That was it. Top of the world. Peek was a talented, good-looking kid, a born entertainer, the life of the party and a hell of a singer. He kept singing and playing for 40 more years, but he never got bigger than that: standing behind the singer in a toss-off scene of a Jayne Mansfield comedy and pretending to play, the very picture of teenage insouciance. He was 63 when he died last week.

I got to sing with him a few times. Gene Vincent died in 1971, but the four remaining and willing Blue Caps, who were only his band for a few years, have been getting together and performing from time to time for ages, with one substitute or another singing and playing bass. There's guitar player Johnny Meeks, who replaced the legendary Cliff Gallup way back when; drummer Dickie "Be-Bop" Harrell, who was 15 when he met Vincent, right at the beginning; and the Clapper Boys, Paul Peek and Tommy Facenda, who flanked Vincent at the microphone, singing backup and clapping hands. This was the second version of the Blue Caps, the live version, rougher and wilder than the original, Gallup-led band that recorded laid-back but burning hits like "Be-Bop-A-Lula" and "Woman Love."

They had come out to California in 1996 to play a few shows in support of a Vincent tribute CD called "Turning the World Blue." The first show was in Los Angeles, I think. My band wasn't on it. We joined the little tour in San Jose. We were called the Wankin' Teens, and we did a song called "Baby Blue" on the record. This was just about the time the rockabilly-swing revival was getting big and annoying. We weren't really a rockabilly band (note the name -- rockabilly bands have to have one of the following words in their name: blue, ace, 8-ball, swingin', boys, martini, rockin', big, combo, smokin', flamin'), but we were close, and rockabilly dance shows had gotten lucrative, so we learned a bunch of covers and got some good paydays. It was at such a show that my bandmate Wankin' Wayne sweet-talked us onto the tribute CD and tour.

We were the band before the Blue Caps at the San Jose show. We were already onstage and the boys hadn't shown. Word came that they were running late on the drive from L.A., and we were asked to keep playing. We tapdanced -- not quite literally, but almost -- for about an hour and a half before they finally showed up, four guys in their late 50s and 60s, wearing goofy Blue Caps T-shirts and, of course, blue caps. With their hired bass-playing singer, a husky, sweet-voiced L.A. rockabilly guy named Russell Scott, they came onstage and set up. I wasn't expecting much. Bunch of old guys doing a nostalgia tour.

They were the wildest rock band I've ever seen, and I mean period, not "for their age." They were genuinely nuts, not showbiz crazy like a million bands I've seen and even played in, but really nuts. Drunk, rolling on the floor, sweaty, screaming punk rock nuts. When they played with Vincent, they used to throw lit firecrackers at each other onstage. That kind of nuts. I loved it. I asked the Clapper Boys if they'd come onstage with the Wankin' Teens and sing "Baby Blue" with us. They said no. I should come up and sing it with the Blue Caps.

Johnny Meeks played a beautiful cherry red G&L guitar. One night Wankin' Wayne asked him if maybe he'd like to trade guitars. "Well, I would," Meeks drawled with a smile, "but Leo Fender gave me this one as a gift." (I can still hear his emphatic answer when someone asked him if he was married: "Hey-ell no!") Dickie Harrell was the funniest, always joking, one zinger after another. It was the 15-year-old Dickie whose background scream going into the chorus of "Be-Bop-A-Lula" has been imitated ever since by lesser rockers. In "The Girl Can't Help It," the boys all shake their hats off at the scream. Tommy Facenda -- they called him Bubba -- was a genuine, friendly guy, also funny, and kind of a sidekick for Paul. "When we're away from our wives is the only time we can drink!" Paul said as they knocked back another in San Francisco. Paul wore an eye patch sometimes. We asked Dickie why he only wore it sometimes and Dickie said something funny. Wish I could remember it. I asked him again this week and he said he didn't know, but he thought Paul was blind in that eye and that it bothered him sometimes.

After they split with Vincent they had varying degrees of minor success on their own. Meeks led his own bands in California, then did studio work and played for Merle Haggard before going home to South Carolina, where he still does a one-man act. Facenda had a small hit with "High School USA" in 1959. There were 30 different versions of the song released, each mentioning high schools in a different region. He eventually went back to Virginia, where he worked as a firefighter, and since his retirement works as a hospital security guard and CPR instructor. Bubba and Dickie were Gene's homeboys, from Norfolk. Dickie's retired after 37 years of working with "haz mat" for the government. "It was time to pull the plug," he says.

Paul Peek's obituary in the Atlanta Journal-Constitution (he too was from South Carolina but he lived in Lithonia, an Atlanta suburb) mentioned that he had several songs that were "pick hits in the trade magazines" -- "The Rock-A-Round," "Sweet Skinny Jenny," "Olds-Mo-William." He was a working musician his whole life, but despite his looks, his flair, his voice, he never made it. I've never heard most of his records. I did find a song called "Pin the Tail on the Donkey" that he did in 1966. I didn't know, singing with him, what a great singer he'd once been. The song sounds like a Tom Jones throwaway, but what a voice. Smooth but earthy, soulful, with a Southern accent and great phrasing. ("Get lost" comes out "git lawst.") Right after the bridge, he emphasizes the word "too" in the line "I'm sorry that I hurt you but like a donkey I was not too smart," and despite the ridiculousness of the material, it's sublime.

Most of that was gone when I met him. He was still an OK singer, and he could have an audience eating out of his hand, but he'd lost the best part of that voice. He kept talking to us about "Susie Q." We never quite figured out what the story was, but he seemed to be claiming that he'd written it and it had been stolen from him. Or something. Every night, onstage with the Blue Caps, he'd play that distinctive opening riff on guitar, trying to get his mates to play the song, but they never would. They'd just launch into another Gene Vincent song, right over Paul. We told him we'd play "Susie Q" with him if he taught it to us, but we never got it down, and he seemed OK with missing out on a chance to sing with the Wankin' Teens.

Paul Peek seemed frail and old when I knew him, though he wasn't even 60. He got really sick with cirrhosis of the liver in '99. He had no insurance. Thanks to an Internet appeal, fans and rockabilly enthusiasts contributed to a medical fund. He continued performing when he could. Reports on the excellent Rockabilly Hall of Fame Web site occasionally had him feeling better, getting stronger, thanking people for their support. But it got the best of him last week. The Independent newspaper in London ran an obituary. It began, "Elvis Presley films aside, 'The Girl Can't Help It' (1956) is the best of the rock 'n' roll films ..."

I'm not playing any gigs these days. Paul Peek beat the bushes for four decades, playing the local clubs. I'm a little tired of it after one and a half, and not anxious to start another band. Anyway I won't be singing with the Clapper Boys ever again. If you want to see them singing "Baby Blue" with the right man on lead, find a copy of a movie called "Hot Rod Gang." But I can put myself in that scene whenever I want, right between the Clapper Boys. All I have to do is close my eyes, just like Bubba did. Baby baby baby baby baby baby baby ...

Paul Peek's illness left his family with a serious financial burden. Contributions are welcome and may be sent to Barbara Peek, 6276 Cathedral Lane, Lithonia, Ga. 30058.