A smarted-up, tarted-up take on a book about a girl who unapologetically enjoys sex. 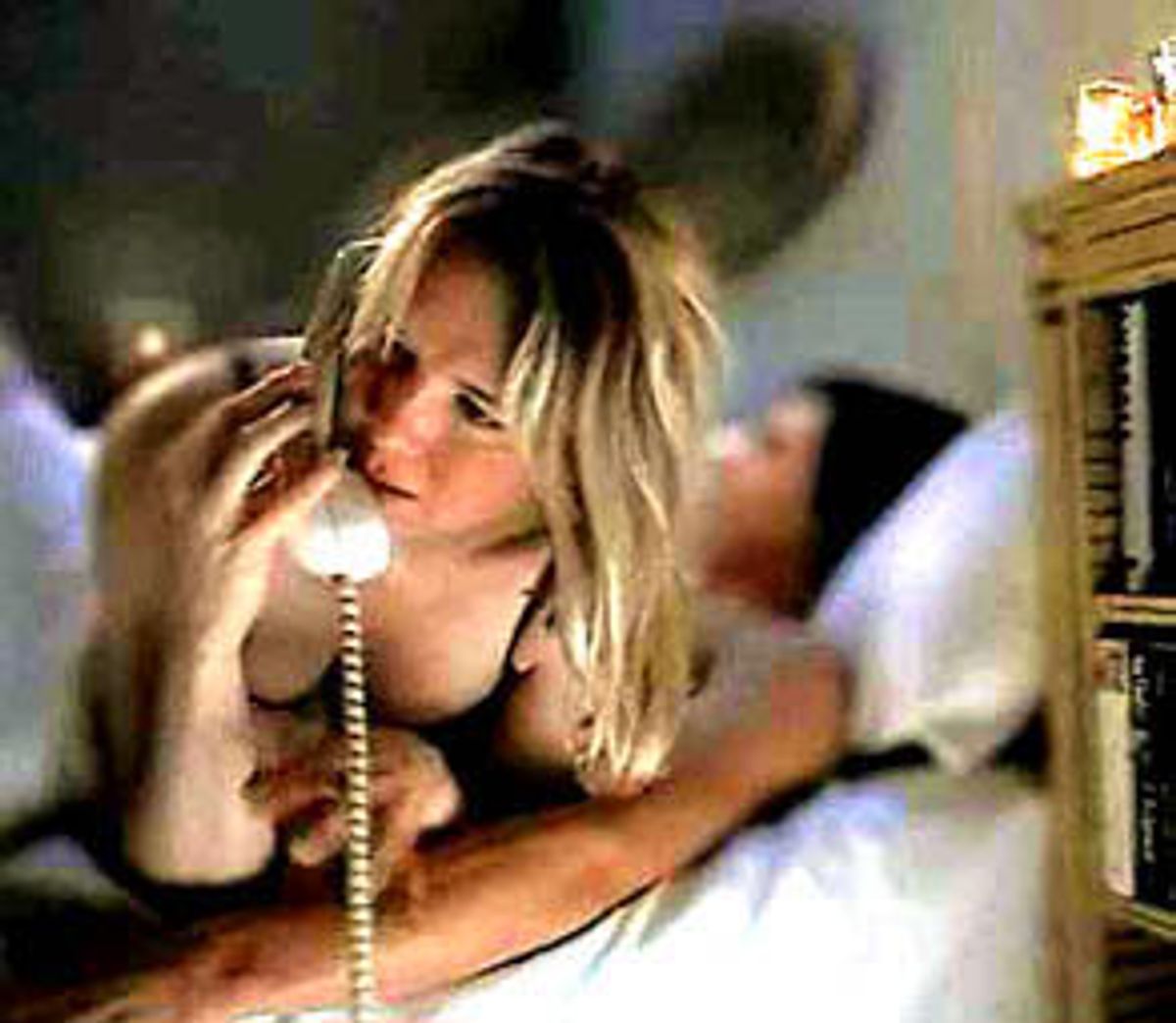 "Bridget Jones's Diary," director Sharon Maguire's adaptation of the hugely successful Helen Fielding novel, isn't nearly the movie it should be. But a film's tone is much harder to get right than its shape: Think of the difference between a straightforward royal blue and a dusty periwinkle that's exactly the shade of that one elusive stripe of a certain sunset sky. In that sense, "Bridget Jones's Diary," despite its miscues and patches of wayward perambulating, wins the bigger battle. It strikes just the right tone, and in the recent universe of airlessly cheery romantic comedies like "Someone Like You" and "What Women Want," that's no small thing.

"Bridget Jones" makes a better movie than it does a novel. Fielding herself helped adapt it; Andrew Davies and Richard Curtis, the latter of whom wrote "Four Weddings and a Funeral" and "Notting Hill," are her co-writers. Fielding's novel, a story loosely molded on Jane Austen's "Pride and Prejudice" and begun as a series of columns in the British newspaper the Independent, recounted the misadventures of a London single woman in her early 30s, a goodhearted, overweight, insecure, bumbling and desperate-to-be-attached Everywoman.

The problem was that the Bridget Jones of Fielding's novel wasn't so much a character as a miniskirted confluence of every stock insecurity that single women nearing the end of their baby-making years are alleged to feel. Fielding seemed to be working under the assumption that if you jab enough humor (of any kind) at your own self-pity, you'll come up with something noble. The result was often amusing, but ultimately just as annoyingly handwringing as an old "Cathy" comic strip or a Wendy Wasserstein play, running on the fumes of an supposedly self-effacing laugh track with a simpering whine attached: "C'mon, guys, we chubby single girls are really nice people!"

"Bridget Jones" the movie is a recognizable version of the book; it's simply a much smarter one. Fielding, Davies and Curtis had the good sense to downplay the novel's cutesiest and most annoying elements -- the obsessively endless references to Bridget's calorie counting, for instance, and the book's trademark but gimmicky use of Bridgetisms like "v. v. good" (which became even more annoying as reviewer after reviewer struck upon the oh-so-original idea of adopting them as well).

The film preserves one significant and enjoyable element from the book: It's clear Bridget is a girl who unapologetically enjoys sex. We first meet Bridget (Renée Zellweger) as she arrives at her family's Christmas party; her mother (Gemma Jones) is eager to match her up with handsome, single barrister Mark Darcy (Colin Firth). Even aside from the fact that he's wearing a hideous reindeer sweater (a pitch-perfect match for the sculpted-velvet carpetbag vest-and-skirt combo Bridget's mother has forced her to wear), he strikes Bridget as arrogant and rude. She returns to her P.R. job at a London publishing firm, anxious to forget about the swine, only to find that he shows up at practically every work and social engagement she happens to attend, usually with a snooty, grasshopper-thin fellow barrister named Natasha (Embeth Davidtz).

Bridget's office is the kind of place that's peppered with sourly conservative workmates and leering superiors like the one named Mr. Fitzherbert. (Bridget calls him Mr. Titspervert.) But she can't help tumbling into a torrid affair with her devilishly boyish boss, Daniel Cleaver (Hugh Grant), who just happens to be Darcy's nemesis from some past romantic triangle.

Meanwhile, Bridget goes about the business of being single and feeling increasingly uncomfortable with that fact; she makes the occasional reference to wanting to lose that 20 pounds, quit smoking and, of course, find a nice, steady boyfriend. The script, unlike the book, doesn't hammer those points into you like so many torturesome thumbtacks. Maybe that's partly because Zellweger is so at home in the character of Bridget that she doesn't need them.

Particularly among fans of the book in the U.K., Zellweger was a controversial choice for the role (any American would have been), but she turns out to have been the perfect one. Although I'm not a fan of the "Raging Bull" school that believes gaining weight for a role is tantamount to great acting, the 20 pounds that Zellweger put on to play Bridget changes her carriage and her demeanor. Pudgier, she looks much more vulnerable than she does in her usually svelte body; the soft roundness of her neck even frames her face differently.

The difference is that although Zellweger's Bridget is conscious of her weight, the way she carries it makes it clear to us that it's not half the liability she thinks it is. The character (brilliantly costumed by Rachael Fleming) tends to wear clothes that are just on the wrong side of right: a skirt that cuts her thighs off at an unflattering place, or a see-through top that shows off her gorgeous curves but is simply badly cut. Especially in romantic comedies, costumers tend to put heroines in silly, instantly likable, nonthreatening clothes. A favorite tactic, which I've seen on everyone from Meg Ryan to Sandra Bullock, is to attempt to hide and therefore uneroticize the actress in sweater sleeves that droop to her fingertips à la Dopey.

But the intentional wrongness of the clothes in "Bridget Jones" is less like a devious calculation than a gentle but brilliant grace note to the character. In those too-short outfits, pinching just slightly in all the wrong places, Zellweger comes off as unselfconsciously voluptuous, vaguely awkward but in an unmistakably sexy way. When we see her rolling around in bed with Daniel, giggling with delight at an only thinly veiled anal-sex reference, the clothes, now flung aside with abandon, make perfect sense. Sometimes a woman's inability to put her clothes together just right is simply a reflection of the idea (recognized on her part or not) that she's her best self when she's not wearing them.

The script is teasingly, pleasingly raunchy in places. Daniel and Bridget first get together as the result of an increasingly flirtatious e-mail exchange. He peppers the end of an apology for potential sexual harassment with the inspired, unapologetic postscript "Like your tits in that top." Midway through, though, "Bridget Jones" becomes more concerned with flashing its message -- "You're OK just the way you are" -- and its cheerful randiness falls by the wayside. The movie starts to feel less juiced up and more conventional.

That doesn't diminish the appeal of the performers, though: Zellweger walks the line between being pouty and eternally optimistic without ever turning it into a routine. Her portrayal of Bridget is never an exercise in masochism, because you don't want to feel sorry for her; you want her to pull her life together and then just find a nice guy. Jim Broadbent, in a too-small, underdeveloped role, has a gentle, sozzled charm as Bridget's father.

Firth -- who played Austen's Darcy in the popular BBC adaptation of "Pride and Prejudice" -- is a marvelously restrained actor who might have been terrific here if only the script had provided him with some essential pivot, a point at which we understand why he goes from despising Bridget to beginning to fall in love with her. As it is, though, he has some fine, subtle moments. After confessing his affection for Bridget at a dinner party, he's beckoned back up a stairwell by his date, Natasha. (She crooks her finger at him as a signal to hop to it.) He pauses at the foot of the stairs, takes a few tentative steps and then bounds up the rest, as if he's resigned himself to escaping the prospect of happiness in favor of duty.

But it was Grant, as the scoundrel Daniel, who ran off with my heart like a naughty dog dashing off with a scarf clenched between its teeth. The stuttering, shambling Grant of "Notting Hill" is like a robot carefully pieced together to make women swoon without ever intimidating them. The Grant of "Bridget Jones" doesn't give a fig whom he intimidates; he flies his rakishness like a kite.

Maguire doesn't know how to use music in a movie, aside from relying on the old trick of pulling out the vintage R&B and Motown when she needs to crank up the mood a notch. But she does give Grant a superb entrance: Against Aretha Franklin's opening salvo of "Respect" ("Whatchyu want?/Baby, I got it"), a set of elevator doors opens to show us Grant's face in close-up; before we've even seen him move, we know he thinks he's the cock of the walk just by the way his lounge lizard's eyes dart back and forth, looking to capture his next meal with his tongue, or whatever's close at hand. When he finally seduces Bridget, she's mortified because she's wearing a huge pair of girdlelike granny panties. Daniel glances at the monstrosities and laughs ("Helll-LO, Mummy!"), pulling her skirt over them protectively only to lift it again. "I have to have another look; they're too good to be true." His theatricalized sense of wonder at this ugly undergear relaxes her: How can she not laugh?

Daniel is not a nice fellow, and worse yet, he's a very confused one; his cruelty to Bridget is indefensible. But naughty, confused boys do serve their purpose in the dating world, and after you've gotten over them, some of the memories they leave behind are like little treasures. Grant's Daniel leaves no doubt that someday he'll play that role for Bridget. He strokes her embarrassment till it's flushed with pleasure. Sometimes even a very bad boy can turn straw into gold.