More of her to love

My own habits are rather Bridget-like, so I feel it's OK for me to point out that she looked like Karl Malden. 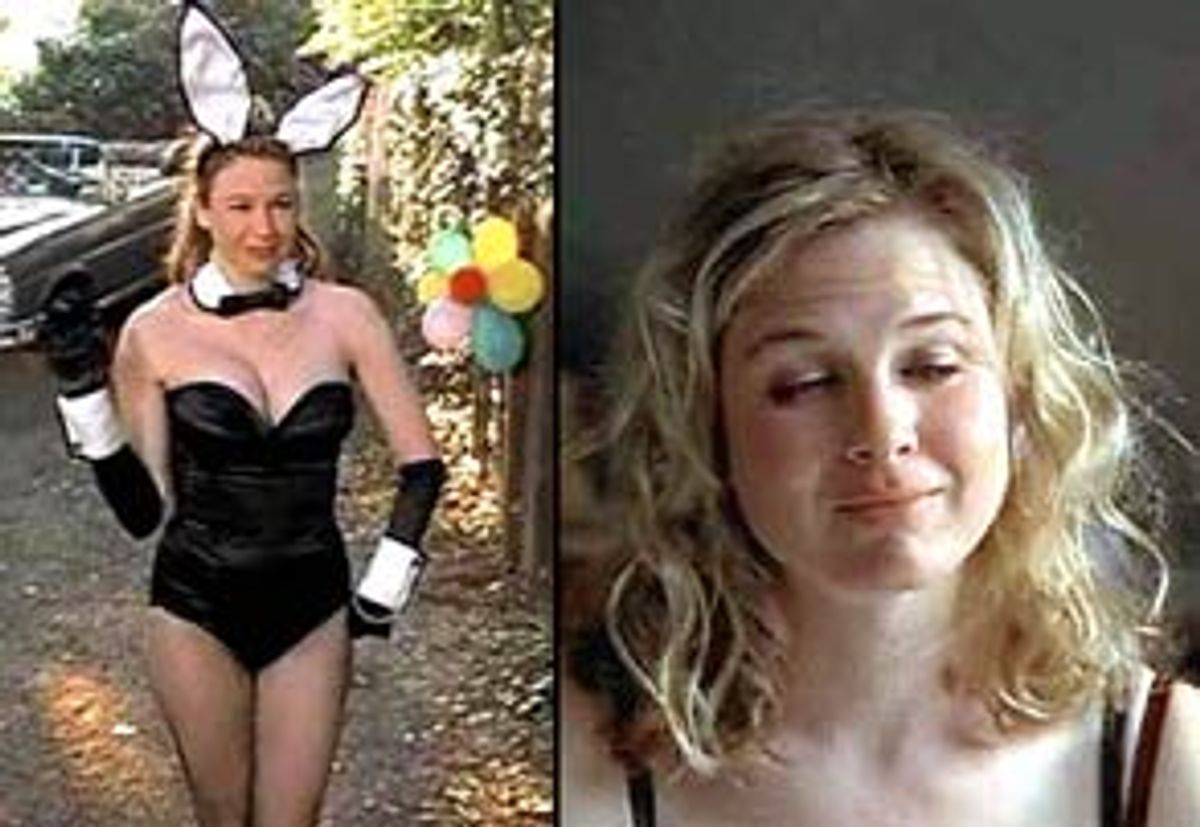 By the time "Bridget Jones's Diary" is released Friday in theaters nationwide, Renée Zellweger's poundage gain to occupy the part of the title character (and her subsequent weight loss to get back to her typical fighting weight) will have been noted by at least three dozen publications, few of which will have been able to resist making fat puns in the headlines.

The Los Angeles Times, for example, has already described her role as "A Part with Meat on its Bones." Variety called it a "long a-weighted" filmic debut. Even the Christian Science Monitor chimed in: The part, it said, offered "A Fuller View of Single Women."

Depending on whom you believe, Zellweger gained anywhere from 15 to 20 pounds (my money's on 20) to play Bridget. She has since lost 25 pounds (it looks more like 30) to play her customary role as movie star. By now columnists and film reviewers have unanimously commended the film's "realistic" (physical) portrayal of women and lambasted Zellweger for rushing to impersonate a praying mantis.

Except, of course, for the glossy women's magazines, which commended her bravery in putting on the weight and then quickly congratulated her on taking it off so promptly.

But then, that's not surprising, since this is all their fault.

While Vogue was quoting Zellweger talking about how tired the "Bridget"-mandated lack of exercise made her, how moody the sugar and how lethargic the nightly Chardonnay, the New York Post was advising us to enjoy the message of "empowerment" offered by the fictional Bridget but to ignore the protestations of the actual Zellweger -- who allegedly ran around the "Bridget Jones" set moaning, "I'm fat, I'm fat!"

The Post also reminded us of that shameful moment in our magazine history (September) when Harper's Bazaar decided to bump Zellweger from its cover because she had already put on weight for the role. That story was picked up at the time by dozens of newspapers and magazines, which, then as now, took yet another searing, collective look at "Hollywood and the media" and made all sorts of shocking, shocking discoveries about unrealistic standards and what "normal" people look like and societal pressures and anorexia statistics and iceberg lettuce.

It seems that every issue -- even the size of Renée Zellweger's ass -- is split down partisan lines these days. Depending on who you are (or whom you write for) there is always a correct side and an incorrect side, and, in general, people don't break ranks. It's all about consensus.

So I should join the chorus. I should say that Zellweger never looked better than she did while playing Bridget Jones, and how great it was to see a "normal-sized" woman playing a romantic lead.

But the first thing that crossed my mind when I saw her on the screen was, "Holy shit, she's fat."

But the thought never left my mind -- I kept waiting for the triumphant weight-loss scene, which never came. She looked like an alcoholic chipmunk en route from the nougat farm. I wouldn't dwell on it, but my own habits are rather Bridget-like, so I feel it's OK for me to point out that she looked like Karl Malden. She spent the entire movie smoking, drinking wine from the bottle and shoveling cake in her mouth and critics are tossing around words like "healthy."

OK, so she wasn't the size of a planet. She could still fly coach; Weight Watchers wasn't going to ask her to hold up her old jeans in a commercial any time soon. But she was, you know, kind of fat. Why do we have to euphemize it out of all existence? It's not like chubby girls never manage to get the cute guys. This is America! It's the land of the fat!

What's interesting is why the filmmakers chose to add to the existing Zellweger. She's never exactly seemed underweight. As Helen Fielding herself has pointed out, we always know Bridget's weight (between 129 and 119 pounds), but we never know her height.

In other words, she might be overweight and she might not be. The point is that she thinks she is. In fact, there's a scene in the book when Bridget finally gets down to her ideal 119 pounds and her friends infuriate her by saying she's too thin and just looks tired. (It's a scene the film inexplicably omits.) The point of Bridget is that she is not so much a statistical composite, some "everywoman" -- it's that she is a projection of you.

And when you imagine yourself in a Hugh Grant-Colin Firth sandwich, you don't have jowls.

I'd like to say this about weight, as someone who recently realized that, on my deathbed, I will look back on my life and see it for what it really was, a protracted, forever indecisive battle between me and about 15 pounds: Maybe Zellweger got a little carried away with the weight loss. Many of us do every now and then (every two years like clockwork and/or after a major breakup).

So she looks a little ropy, a little drawn. She was just dumped by her boyfriend. She's entitled. Meanwhile, all her friends are telling her, "You're too thin, you're too thin," and she's thinking, "You're just jealous," which they are, even if they are right about her weight right now. I've been on both sides of those 20 pounds and I know. And if you have, so do you. Life is completely different on either side. And if you don't believe me, imagine 80 McDonald's Quarter Pounders stuck to your body and try again.

So everyone should back off and let her take her jeans off without unbuttoning them for a while. Let her feel like she just had a peek up God's left nostril. Leave her alone.