Bush's habit of cutting the budgets of organizations he's used for photo ops is making him an easy target for Democrats. 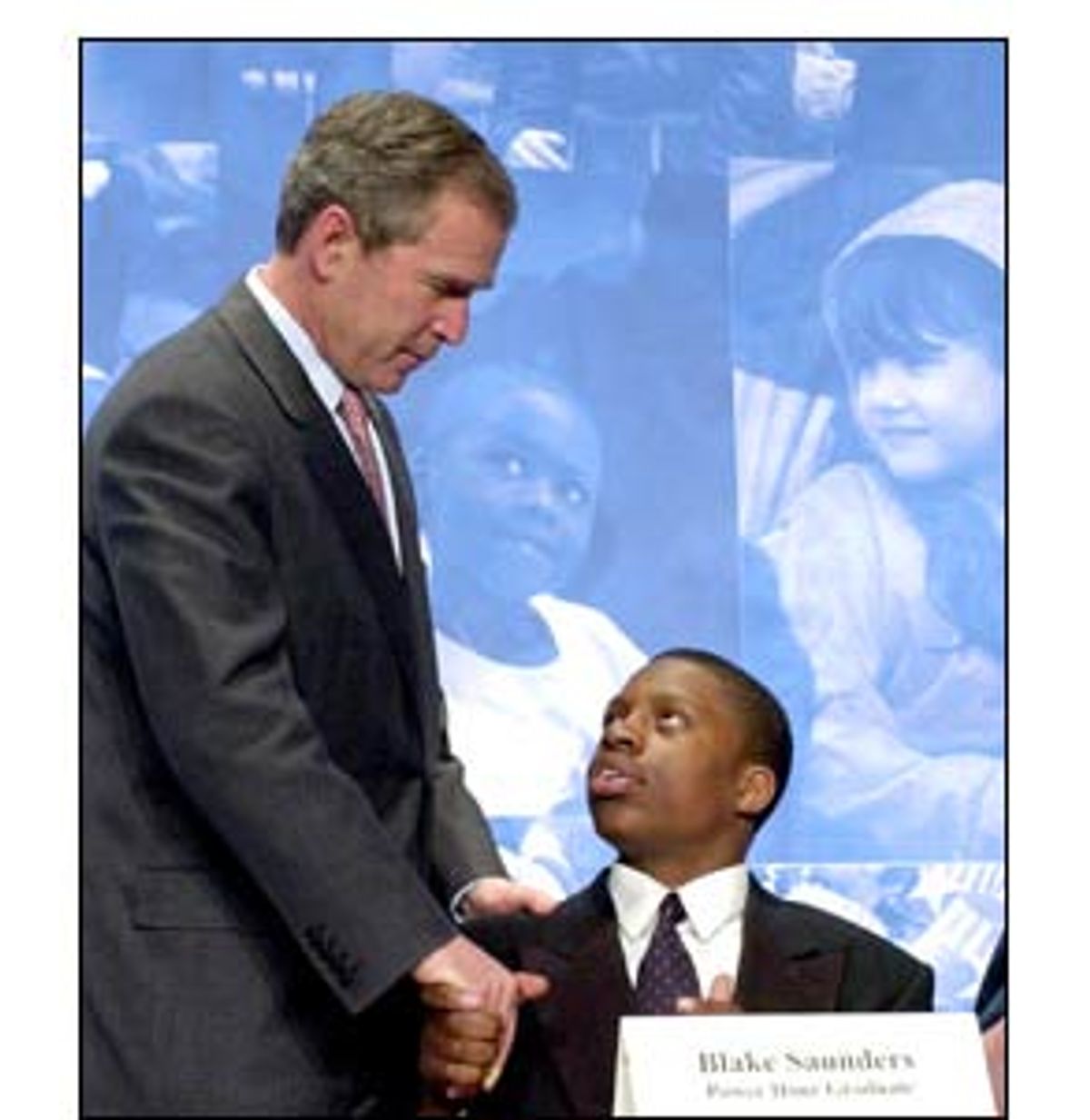 So you head up a domestic program that relies on federal money, and you're looking for a way to avoid the Bush budget ax. What do you do? For one thing, says the Democratic National Committee, don't invite the first family over for a photo op.

In the last few weeks, either President Bush or his wife, Laura, has visited a total of three domestic organizations whose work they heralded -- a children's hospital in Atlanta, a public library in Washington and a Boys and Girls Club in Wilmington, Del. All three would have their funding slashed in the budget Bush proposed last Monday.

"It's just more examples of Bush's illusion of inclusion," says Democratic National Committee chairman Terry McAuliffe. "It's politics at its worst, it's cynicism at its worst. He uses them for photo ops and props and then he axes them out of the budget."

White House spokesman Jimmy Orr, however, refuses to take the bait. "I'm not going to engage in any political back and forth" with the DNC, he says. "This administration is about changing the tone in Washington. We're going to focus on the issues and what the president's priorities are. The budget is compassionate, it's responsible, and its goals are funding for important priorities like education, healthcare and children's programs."

On March 1, for example, Bush visited Egleston Children's Hospital in Atlanta, which he declared "a place full of love."

"There's a lot of talk about budgets right now," Bush said at the time, "and I'm here to talk about the budget. My job as the president is to submit a budget to the Congress and to set priorities, and one of the priorities that we've talked about is making sure the healthcare systems are funded ... The point I want to make in this haven of love, a place of deep concern about children's health, is that we can fund priorities."

But, Democrats slam, the "haven of love" is clearly not a presidential priority. In Bush's proposed budget for next year, federal funding for a pediatric training program that benefits hospitals like Egleston would be cut from $235 million in fiscal year 2001 to $200 million.

David Tatum, director of government affairs for Children's Healthcare of Atlanta, the parent organization of Egleston Children's Hospital, comes to Bush's defense: "I don't feel that this is as bad as it's being portrayed."

After all, Tatum says, "When the president came to visit Egleston, the rumored amount the president was going to put in the budget for the pediatric training program for medical residents was only $40 million. And last Monday he announced $200 million. So we see that as a significant improvement from what it was rumored to be."

Moreover, Tatum says, President Clinton "only asked for $85 million (for fiscal year 2001) but Congress gave us $235 million." Thus, while Bush is proposing a $35 million cut -- which Tatum is confident Congress will restore -- he is, in fact, proposing $115 million more in funding than Clinton requested for the program a year ago. "This is the most we've ever gotten out of the White House in terms of a budget request to Congress," he says.

McAuliffe dismisses these arguments as spin. "It's a cut," he says.

White House spokesman Orr insists that the Bush budget does not slight vital health and education programs, pointing to several which would enjoy spending increases. "I think it's important to take a look at what the president's budget funds," he says. "It triples existing funds for reading programs. It increases funding for Head Start. It invests more than a billion dollars -- up 12 percent from 2001 funding -- in research for children's diseases. It includes a $94 million increase in the WIC [children's nutrition] program, and adds to the Centers for Disease Control budget $22 million more for childhood immunization. It increases child care development block grants by $200 million -- a 10 percent increase from the 2001 budget."

But as the Bush White House certainly understands, images are important -- and the images of Bush and his wife staging photo ops at children's centers that shortly thereafter fell under the shadow of his ax are a bit unnerving.

On April 3, standing in the Northeast Neighborhood Library in Washington, Laura Bush, a former middle school librarian, kicked off "The Campaign for America's Libraries." The first lady's visit, during which she called libraries "community treasure chests," came one week before her husband announced a $39 million cutback in federal spending on libraries.

Emily Sheketoff, executive director of the Washington office of the American Library Association, decries the Bush budget's failure to fund what Sheketoff calls the "excellent programs that are serving their communities."

"I do not blame Mrs. Bush," Sheketoff says, when asked about the irony of the first lady's April 3 appearance. "She's a great advocate for libraries." Her husband may be another matter. "I'm disappointed in the budget," Sheketoff says.

The same day that Laura Bush was heralding the importance of a program her hubby was about to cut, the president was engaged in the same type of activity. (It's so nice when couples have similar interests!)

"All of the federal money, as far as I'm concerned, for after-school programs ought to be opened up to every program in the state of Delaware," Bush said. "I'm here to say thanks for what you do."

Ahem. Well. The president's proposed budget would eliminate funding for the Boys and Girls Clubs of America -- funding that had totaled $170 million in the past four years, and $60 million in the current 2001 budget.

But the proceeds from the president's as-told-to book, which did not exactly eclipse "Harry Potter," will not make up for the $60 million that will be whited out of Bush's federal budget.

Orr explains that Bush eliminated the Boys and Girls Clubs' funding and slashed the public libraries' spending as part of a general effort to eliminate the costly web of individual pet projects favored by different members of Congress, projects that are slipped into appropriations bills without going through the normal review process. Some call it "pork," others call it "earmarks."

"As a general rule, the administration seeks to avoid earmarked funds which are given non-competitively," Orr says. "The president has tried to eliminate congressional earmarks inserted by individual lawmakers."

But isn't that the same exact thing Bush slammed Sen. John McCain, R-Ariz., for trying to do back during the New York primary, when Bush accused McCain of being insensitive to women's needs by opposing earmarked funds going to specific women's breast cancer programs?

The DNC's McAuliffe says that the president's budget is doing his work for him. Recently returned from a trip to Michigan and Wisconsin, McAuliffe says that Bush's proposed cuts "are not only enraging the base of the Democratic Party, but also independent suburban voters. In Wisconsin they're going to lose a thousand teachers from the Clinton-Gore teacher's program. And 1,300 police officers, since the COPS program's being cut, too! Same thing in Michigan -- they're going to lose 3,500 cops there!"