"My Misspent Youth" by Meghan Daum 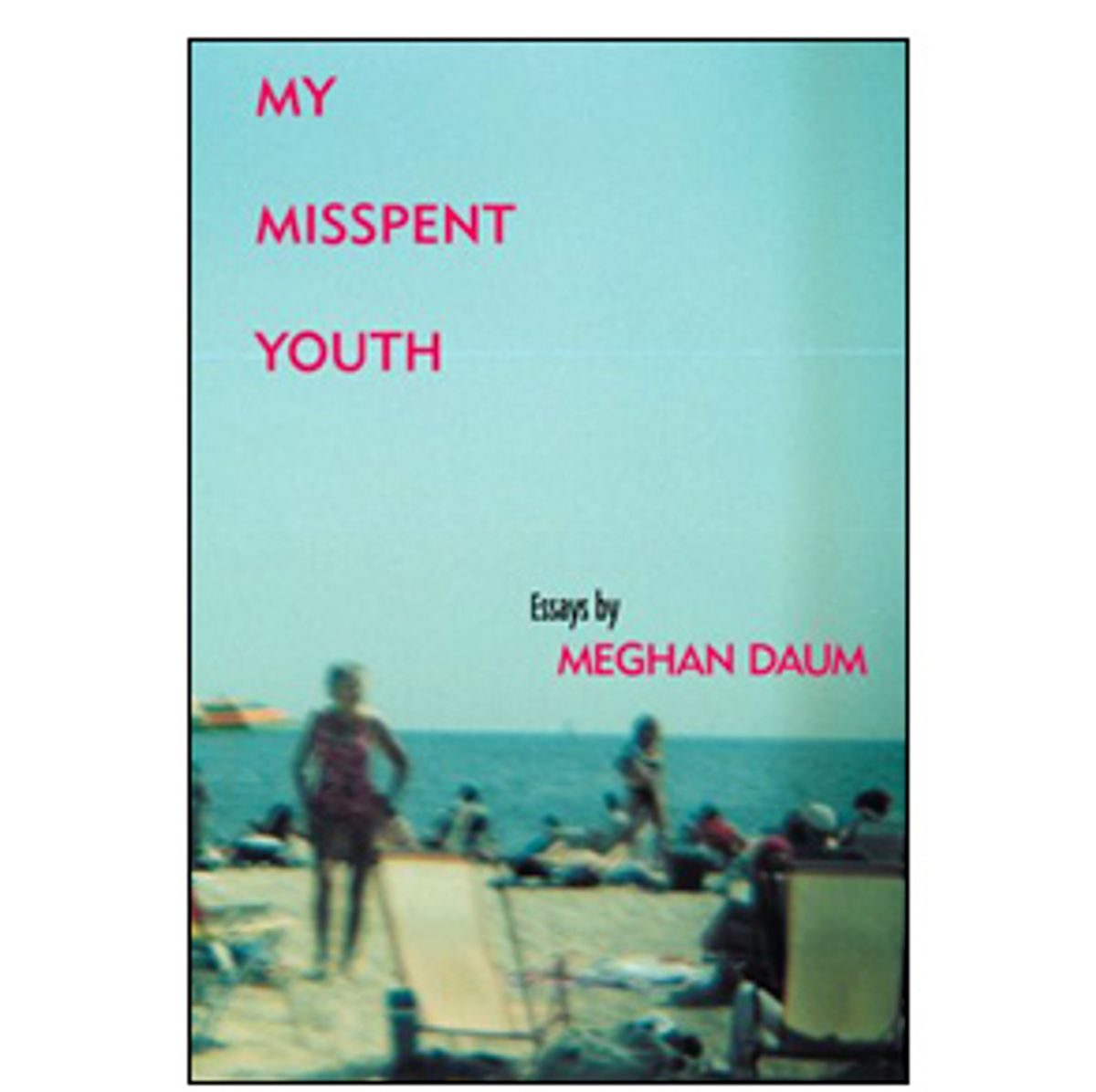 Meghan Daum has labored in the salt mines of Generation X journalism, grinding out, as she aptly puts it in the introduction to this collection of her essays, "over-generalizing articles filled with phrases like 'More and more' and 'We're living in an age of ...'" She describes pitching a (never written) "eight thousand word treatise" to a glossy-magazine editor about "the sociopolitical impact of R.E.M. videos on everyone born between 1965 and 1978." In other words, she's written the kind of stories that young readers eat up with a peculiar emotion best characterized as fascinated affront: The thrill in knowing that how someone like you lives is considered an interesting topic for magazine articles is ruined by the fact that someone else has been hired to write them -- and she's getting it all wrong.

Many of the essays in "My Misspent Youth" fall into well-worn genres of magazine writing: a couple of basic features in which Daum drops into a small community (flight attendants, a "polyamorous" household) and attempts to capture their essence in a few thousand words, as well as a My Disastrous Internet Romance essay, an I Can't Afford to Live in New York Anymore confessional and a specimen in that venerable tradition, the I Thought Working in Book Publishing Would Be So Literary but the Days of Maxwell Perkins Are Long Gone, Let Me Tell You lament.

But, as her collection demonstrates, Daum is a cut above the journalistic grunts who usually work this beat. A talented prose stylist, she can penetrate the shiny crust of the genre essay and come up with unexpected ideas (well, not in the case of the publishing lament, but that one's hopeless). She's also wrestling with a perplexity that she sees -- correctly, I think -- as "the condition that I feel most strongly affects the way we as humans go about the business of living our lives: our habit of expressing ourselves through the trappings of particular ideas rather than through the substance of those ideas." That she has zeroed in on this pervasive condition as "the central conflict of my life" and the lives of her cohort is exciting and promising; that she so seldom seems able to transcend it makes the work here often frustrating -- both because we've all been trained to expect a narrative arc that ends in some kind of ratcheting up of the writer's maturity and because it would be nice to see a writer this gifted progress.

In writing her fine variation on the generic Internet romance story, for example, Daum disdains the formulaic conclusion, which would go something like this: I was seduced by the perilous and illusory perfection of my e-mail relationship, but then I realized my error and now celebrate the difficult and "messy" superiority of real life. (Serious personal essayists love the word "messy.") Daum's take isn't so facile: "My interaction with PFSlider [her e-mail beau] was more human than much of what I experienced in the daylight realm of live beings," she writes, suspecting that the Net had given both of them an outlet for the kindness, honesty and consideration that have been exiled from a real life in which vulnerability has become "the worst sin imaginable." She cops to a "monstrous narcissism" in the way she "slurped up" her correspondent's romantic attention, but she doesn't consider their failed courtship to have been the least bit phony. "It wasn't the Internet that contributed to our remote, fragmented lives," she figures. "The problem was life itself."

And when Daum isn't compelled by the length or ambition of a piece to probe for Big Meaning, when the mood is breezy and she lets herself riff on the aesthetic obsessions that are (albeit troublingly) her abiding concern, she's lots of fun. In "Carpet Is Mungers," a diatribe on her surpassing dread of wall-to-wall carpeting, she writes:

Carpet is the road you congratulate yourself for never having taken. Carpet is the woman in the supermarket whom you are glad not to be. Carpet is the house who bought the oddly named and aggressively bland-tasting Savannahs when you sold Girl Scout cookies. Carpet is the job you held immediately after graduation, before you realized that a career in marketing posed a severe threat to your emotional health ... It's the efficiency apartment you'll be forced to move into if the business fails, the marriage collapses, the checks stop coming in.

Wood floors, it must be said, appear to be the great passion of Daum's life; they figure largely in a couple of stories and crop up incidentally in others as well. Wood floors are an essential component of the kind of Manhattan apartments "where the paint was peeling and the rugs were frayed, places where smart people sat around drinking gin and tonics, having interesting conversations." In her much-talked-about New Yorker essay on fleeing New York City, Daum describes how her dream of living such a life in such an apartment -- a vision that she seems to have derived mainly from Woody Allen movies, another of her touchstones -- drove her into near bankruptcy.

The story of this crisis is the title essay in this collection, and an impressive piece of work, but in it Daum never quite manages to separate the wood floors with their Oriental rugs from a less dicor-driven notion of what she calls "intellectual New York bohemianism." The former may not be within her budget, but does that necessarily mean that the latter isn't? In the end, when she moves to Lincoln, Neb., where the rents are lower, it's not clear that she has chosen a path of greater "authenticity" or merely given up intellectual bohemianism for the sake of having affordable oak under her feet.

Daum is smart enough to know that she's pretty messed up in this department, but not, it seems, quite able to use her own confusion for fodder. "It's really shallow," she admits in her anti-carpet manifesto. "But I'm capable of being extremely shallow, far more superficial than I'm often given credit for." Perhaps attempting to appear deep saps Daum's energy, for easily the zingiest piece in this collection, "Music Is My Bag," remains mostly unencumbered by big thoughts.

"Music Is My Bag" is a gloriously articulated rejection of that particular species of middlebrow enthusiasm that expresses itself in such trinkets as piano-key-patterned scarves, "a deck of cards with the great composers on the back," musical note coasters, $300 wooden music stands and tote bags with the eponymous motto printed on them. (Other "Bags" include "Literature Is My Bag," indicated by a collection of silver bookmarks, and "perhaps most annoyingly, Where I Went to College Is My Bag.") "Having a Bag," Daum writes, "connotes the state of being overly interested in something, and yet, in a certain way, not interested enough. It has a hobbyish quality to it, a sense that the enthusiasm developed at a time when the enthusiast was lacking in some significant area of social or intellectual life."

Daum's own family was Music Is My Bag to the max, much to her chagrin. Extremes of annoyance can provoke writing that has the attentiveness of a lover's ode, and so Daum hilariously limns every nook and cranny of "Bagdom," including her mother's insistence on calling Daum's oboe a "horn." This lingo, Daum writes, is a prime example of "the overfamiliar stance that reveals a desperate need for subcultural affiliation, the musical equivalent of people in the magazine business who refer to publications like Glamour and Forbes as 'books.'"

Since the days when little Meghan sat fuming at the breakfast table over her mother's slangy bid for inclusion in classical-music subculture, she has sought to repudiate her earnest, geeky roots. That repudiation is often amusing, but it also seems to monopolize her attention; Daum doesn't show much aptitude for subjects beyond her own experience. "Inside the Tube," a reported feature on airline flight attendants, contains long, garbled sentences such as "But to say that air travel has infused itself into the human experience without leaving marks or building up potentially problematic immunities is to view technology in a Pollyana-like manner that may have gone out of fashion when applied to phenomena like the Internet and surveillance cameras but continues to thrive in the realm of travel." That sort of prose makes Daum come across like she's got a desperate need for subcultural affiliation with whatever type of highbrow (Susan Sontag?) she imagines writes in this way.

Worse is the second reported feature, "According to the Women I'm Fairly Pretty," an account of Daum's visit to Ravenheart, a group of people living in a remote California ranch who practice a kind of organized nonmonogamy called "polyamory." Daum dutifully records the goddess-worshiping members' labyrinthine personal histories and complicated sleeping and sex schedules, perfectly accepting, it seems, of all this systematic libertinage. (You have only to imagine the paroxysm of flummoxed disapproval Ally McBeal would suffer in meeting the same people to realize how differently this could have gone.)

Instead, what bothers Daum about the Ravenheart "family" is their allegiance to "the realm that has long elicited my deepest repulsions. I have stepped into the intersection of science fiction geeks and velvet-caped jousters." The piece ends with a stern, trumped-up disquisition to the effect that the Ravenhearts' purported open-minded inclusiveness is a big fraud -- because they only sleep with other people who like science fiction. In fact, "by being polyamorous, they are, in effect, giving themselves permission to sleep with other members of the science fiction club." Horrors! It would be a lot easier to credit Daum's conclusion, which sings the praises of "the unexpected elation that comes from falling in love with someone whose bookshelves hold none of the same books as your own," if it weren't coming from a woman who admits that she once broke up with "a great man" because he didn't mind wall-to-wall carpeting.

Of course, the thing about the Ravenhearts that really freaks out former high school band member Daum is their "desperate need to compensate for their adolescent nerdiness." In doing so, she tut-tuts, they fling themselves into "a subculture that is based around the premise of 'not fitting in,'" one that has gone so far as to "consumerize the idea of not fitting in." Hmm. You mean, sorta like New York intellectual bohemians? In that case, wouldn't the pagan tchotchkes and Robert Heinlein paperbacks that fill Daum with loathing be the Ravenheart equivalent of wooden floors? Naturally, the last thing she wants to recognize is how similar the Ravenhearts -- in their hankering to construct a more interesting life on the dull foundation of suburban childhood -- are to herself. Well, there is one big difference: They're not coming to her house to sniff at her bric-a-brac.

The final essay in "My Misspent Youth" is the savage "Variations on Grief," in which Daum lacerates herself for her inability to feel a genuine grief after a friend's freakish death and for entering into an elaborately artificial relationship with his parents afterward. The essay's rigorous honesty is a bit undermined by its lack of focus, but it packs a wallop nonetheless. And it's a sign that if Daum ever gets over the fact that, underneath it all, she'll always be a bit of a nerd, she'll find plenty of other subjects to write about.