It started causing trouble as a teen and has never really stopped. We can't name names, but its initials are LSD. 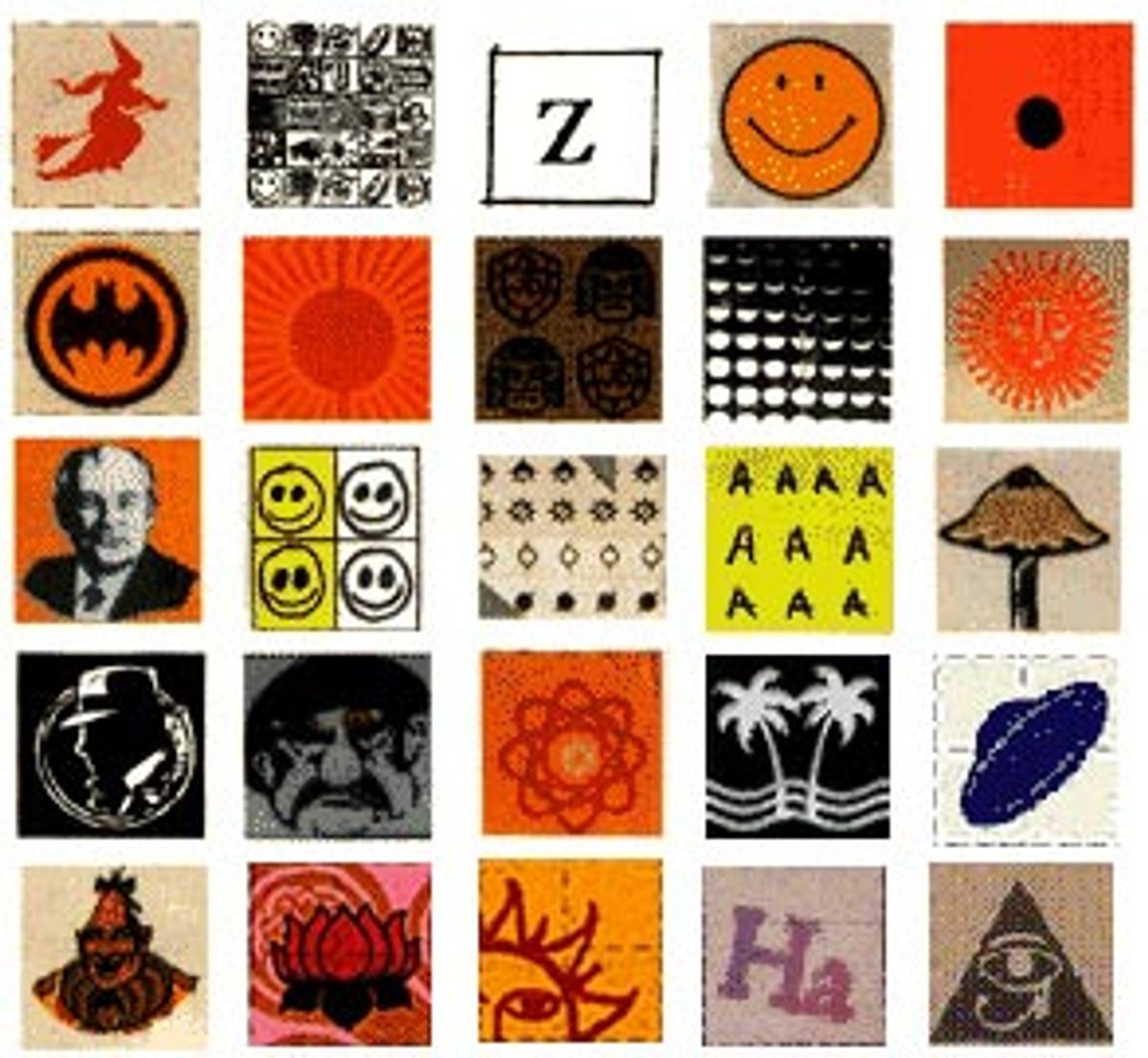 A hundred and one years ago today, the first book of postage stamps was issued in the United States. Exactly 43 years after that, on a Friday afternoon -- April 16, 1943 -- Swiss chemist Albert Hofmann took the world's first LSD trip.

We now know a lot. We know about the epiphanies, and the paranoia and the visions. We know that the CIA conducted secret LSD experiments on U.S. citizens, the military and its own agents for years. We know that there was briefly talk at the CIA of testing LSD on unsuspecting subway riders. We know that the public got its hands on the drug in the '60s and reconfigured it as a countercultural apparatus. We know that some users really did believe, at inopportune times, that they could fly. We also know LSD's dangers were often exaggerated by the government, and then the media.

We know acid's popularity waned in the late '70s and '80s, then picked up in the '90s. In 1993, 3.2 million Americans said they'd used it, according to the Drug Enforcement Administration. We know it makes police and drug enforcement agents see red -- since 1981, they've busted only a handful of labs, and the majority of their arrests have just been middlemen.

Hofmann called LSD his "problem child." Soon enough, it was America's, and as with all problem children, we've yet to hone a good response.

On March 30, San Francisco artist Mark McCloud was acquitted of LSD charges in Kansas City, Mo. McCloud, 47, makes blotter art -- the prints found on sheets of LSD tabs -- minus the LSD, according to McCloud and a Kansas City jury.

Police seized 33,000 sheets of blotter paper, plus some framed samples, from McCloud's home, according to the Kansas City Star. He was accused of conspiring to distribute and distributing the drug near a school. But McCloud's lawyer pointed out that the blotter paper was untreated and therefore legal -- never having been impregnated with the d-lysergic acid diethylamide, it was like a pot pipe with no pot in it.

In the past, McCloud has joked that collecting blotter art is tricky, since it's tempting to eat it. A small, personal stash of the drug was found in his apartment during the raid. He says he hung out with Timothy Leary and tripped with '60s LSD pioneer Augustus Owsley Stanley III. McCloud likes acid. Nevertheless, given the well-established history of LSD hysteria -- recall, for example, the rumor that evil acidheads had wiped LSD on the buttons of pay phones across the country -- the prosecution argued with all the paranoia of a bad trip.

"Mark McCloud was the head of an LSD conspiracy that gained a new generation to the cause of LSD," assistant U.S. attorney Mike Oliver said. "It is a cause that creates in people the capacity to make life-threatening and life-stealing decisions."

When McCloud's reputation in the art world was trumpeted -- an editor from Paper magazine flew in to testify on the two-time National Endowment for the Arts grant winner's behalf -- Oliver turned it around, saying the artist used this reputation as a cover to disguise his countrywide distribution operations.

"This was about the circulation of blotter art as an art form," McCloud said, according to the story in the Star. "Thank God the people of Kansas City can tell the difference between art and LSD."

Not so long ago, McCloud wasn't that keen on people telling the difference.

"Art is not a big enough word for it," the one-time art professor told the Los Angeles Times about his collection back in 1995. "It's magic."

But with a life sentence looming, "art" became the perfect word for it. McCloud had a decent lawyer, and the "magic" argument didn't surface once in the two-week trial. When it became clear that the prosecution could link him to the empty blotters but not the LSD, McCloud watched the case unravel.

Even when they're not facing prison time, people don't stand up for LSD like they used to. Its current renewed popularity notwithstanding, the days of earnestly arguing the drug's virtues are gone. Any discussion about the chemical as a legitimate mechanism for exploring consciousness, treating terminally ill patients or working with habitual criminals has long since been mocked into farce by either those opposed to it or those now embarrassed by their youthful naiveté.

Before LSD was criminal and foolish or visionary and therapeutic, it was an accident that startled a young chemist. Albert Hofmann had been researching ergot alkaloids at the Sandoz (now Novartis) company's pharmaceutical-chemical research laboratory in Basel, Switzerland, when, during the purification and crystallization of lysergic acid diethylamide, he noticed a strange sensation. He described it for a colleague later in a widely quoted note, inaugurating the illustrious and indulgent genre of the acid trip log:

Last Friday, April 16, 1943, I was forced to interrupt my work in the laboratory in the middle of the afternoon and proceed home, being affected by a remarkable restlessness, combined with a slight dizziness. At home I lay down and sank into a not unpleasant intoxicated-like condition, characterized by an extremely stimulated imagination. In a dreamlike state, with eyes closed (I found the daylight to be unpleasantly glaring) I perceived an uninterrupted stream of fantastic pictures, extraordinary shapes with intense, kaleidoscopic play of colors. After some two hours this condition faded away.

Three days later, Hofmann dosed himself deliberately, swallowing 250 micrograms. From that day comes the famous bicycle ride through Basel, and his subsequent glimpse of the true powers of the drug, which included terror:

A demon had invaded me, had taken possession of my body, mind, and soul. I jumped up and screamed, trying to free myself from him, but then sank down again and lay helpless on the sofa. The substance, with which I had wanted to experiment, had vanquished me ... I was seized by the dreadful fear of going insane. I was taken to another world, another place, another time. My body seemed to be without sensation, lifeless, strange. Was I dying? Was this the transition? ... I had not even taken leave of my family (my wife, with our three children, had traveled that day to visit her parents, in Lucerne). Would they ever understand that I had not experimented thoughtlessly, irresponsibly, but rather with the utmost caution, and that such a result was in no way foreseeable?

In the years that followed, Hofmann and others explored LSD's potential as, among other things, an aid to psychotherapy. While the military conducted awful (and long-denied, and at least once fatal) experiments, the medical community wrote volumes about the drug's potential benefits. (Before LSD became illegal, it was tested on more than 40,000 subjects by psychologists alone, according to Martin A. Lee and Bruce Shlain in their book "Acid Dreams: The CIA, LSD and the Sixties Rebellion.")

Research extended beyond the unsuspecting to the rich and famous. Anaïs Nin, André Previn and Clare Booth Luce all participated in LSD studies. For a while, Cary Grant couldn't say enough about his treatment. Leary claimed that, contrary to popular opinion, it was Grant who turned him onto acid. In 1959, Grant raved about his LSD therapy:

I have been born again. I have been through a psychiatric experience which has completely changed me. I was horrendous. I had to face things about myself which I never admitted, which I didn't know were there. Now I know that I hurt every woman I ever loved. I was an utter fake, a self-opinionated bore, a know-all who knew very little. I found I was hiding behind all kinds of defenses, hypocrisies and vanities. I had to get rid of them layer by layer. The moment when your conscious meets your subconscious is a hell of a wrench. With me there came a day when I saw the light.

But acid's popularity took off just as the '60s did, and Leary, his research partner, Richard Alpert (aka Ram Dass), and others got loud about it. Eventually it didn't matter whether or not they were right.

"He was a very intelligent man, and quite charming," Hofmann said of Leary in a 1995 interview. "However, he also had a need for too much attention. He enjoyed being provocative, and that shifted the focus from what should have been the essential issue. It is unfortunate, but for many years these drugs became taboo."

Ironically, it's the taboo that gave McCloud his hobby -- if the acid proponents had succeeded, his collection would be commonplace. They didn't, and it isn't; McCloud has three decades' worth of blotter art and shows no signs of stopping.

"These are symbols of a secret society," he told the San Francisco Weekly in 1995. "And I am the mule that has dragged the cultural evidence to town."

To McCloud, who emigrated from Argentina as a boy, blotter art confirms the integrity of the acid pantheon. The variety of prints, he says, isn't essential; if the LSD industry were just about money, the manufacturers wouldn't bother prettying up their product. (Maybe, but the significance of blotter art has also been exaggerated. Aficionados allude to the impact an image will have over a trip: Ganesha will frame your experience in mysticism, while Daffy Duck's mug will give you a silly trip. Of course in reality, while LSD does vary from sheet to sheet, the different images have nothing to do with what will happen next.)

The Kansas City acquittal wasn't the first for McCloud -- in 1993, he was released on similar charges. Since then, he claims, the drug enforcement agencies have been after him.

"An Interpol agent came to me with fake blotter paper made at great expense by Scotland Yard. They were trying to trap me," he once told the British magazine Loaded. "Said they wanted to raise money for a friend of mine on a similar charge. I could see through them straight away. When you do what I do, you learn to be careful."

There are McCloud fans out there who hope he'll be more careful now. Those who like him love him. Indeed, his collection is occasionally beautiful, and is certainly impressive in scope. As folk art, nothing around captures this particular sensibility better. Yet at the same time, the Kansas City trial brought out something sad in his art. LSD culture, often vapid and sometimes heroic, has been reduced to its vessels. For two weeks, lawyers argued about the blotter paper that LSD comes on. This, it would seem, is what's left. Hofmann, the other eloquent scientists, the activists and the fools have all been lumped into one kooky old pile. With acid's marginalization, all that remains in the spotlight is some overwrought, stamp-size nostalgia. Maybe LSD was never not on the margin, but the margin didn't used to seem so far away.

Still, taking a page from Hofmann, Leary, Ken Kesey, Abbie Hofmann and half a dozen other psychonauts, McCloud has managed to scrape together his share of charm.

"Mr. McCloud, I told you I didn't want any reaction in the courtroom," U.S. District Judge Gary Fenner scolded when the just-acquitted defendant jumped up to greet the jury.

According to the Kansas City Star, McCloud shrugged.

"I sure would have loved to have given that jury a hug," he said. "Where I come from, you thank the people who set you free."