Wayne Wang's new film, "The Center of the World," shows how dangerous geek love can be. 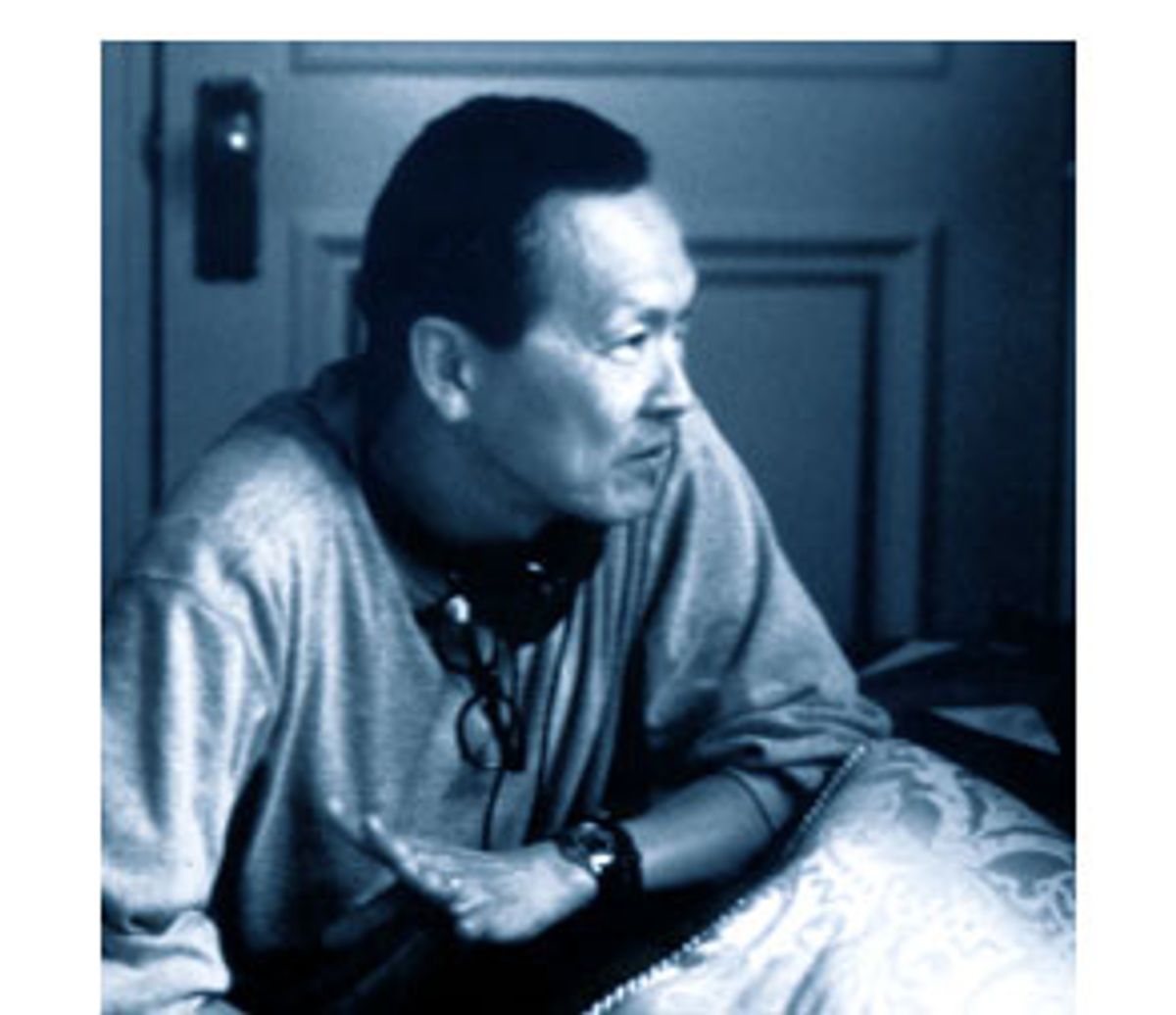 Wayne Wang, a director best known for quirky independent films like "Chan Is Missing" and intimate looks at the Asian world in "Dim Sum" and "The Joy Luck Club," can now add a category to his résumé: sex.

"The Center of the World" (a reference to pussy) is not only about sex but about the compelling intersection of technology, courtship and money that was unique to the Internet boom world of late-1990s California -- before the current "correction." The protagonist, Richard (Peter Sarsgaard), is a boy/man in his late 20s working 24/7 for a dot-com poised to go public. He hasn't dated in a couple of years when he meets Florence (Molly Parker), decides he likes her and finds out she not only is a drummer in a rock band but strips on the side. He is craving companionship, so he offers her $10K to go to Vegas with him for three nights.

After an initial rebuff, she boldly e-mails him an acceptance if he will follow her rules: separate rooms, no kissing, no penetration, and she'll strip for him every night from 10 p.m. to 2 a.m. only. He accepts, and the passion play begins. Florence tries to stick to her own strict rules, but starts to feel something for Richard. Richard knows that he has bought Flo but irrationally begins feeling they have a relationship. That's when things get ugly.

Wayne Wang talked to Salon in his minimally furnished office in San Francisco, high atop Chinatown/North Beach and with a clear view of a hotel of ill repute.

Do you see a lot of action at that hotel?

You see everything down there ...

How did you get the idea to do this Internet guy-meets-stripper story? Did you know guys like this?

I had some friends in the Internet world, but I talked to a writer for the San Francisco Chronicle who had done a story about a class for Internet guys who needed to learn how to flirt and meet people and learn manners. Through her I met some guys. I found one guy at Stanford who quit his last year of college, went through an IPO, had an apartment on [San Francisco's pricey] Telegraph Hill, went to Centerfolds [a lap-dancing bar on Broadway, the city's titty strip], dated a dancer and ended up living with her awhile. This movie is loosely based on him and other people.

Yes. A lot of Asian kids were like this, too, but somehow that would have been a little stereotypical. Peter [who is Caucasian] is not as hopeless. He's not a total nerd. The main ingredient was that these guys spend a lot of time on their computers. These guys do work hard -- they work 24/7. But they have no life. They are all pretty young, just out of college, still into pizza and beer.

Was there one guy who was the prototype for Peter's character?

There was one guy who was really into Quake, which is like team war. He and his buddies would do this every day at 6 p.m. until the middle of the night. They became really good at it. I played it for about an hour. But I saw that your whole world becomes about this violence. I mean, look at the shootings at the school in San Diego. All of that kid's friends said he was normal. He was repressed, but these kids can have violence at their fingertips. It's scary to me how you can become isolated with your fantasies about people.

How do these guys learn about sex?

It's amazing how, during the heyday of the venture capital boom, people on the fringe but with money would take these kids to Boys Toys, which is a very fancy restaurant on Broadway, and they'd throw hundreds of dollars away on them. Everyone would be dressed in suits and they'd have dinner, and the girls stripped for them while they ate! It was like "Tom Jones" in 2000.

I myself went with six guys to the Mitchell Brothers [a famous strip club on the edge of San Francisco's Tenderloin]. I took Peter and Molly there. I was the pimp that time. I gave the girls a few hundred dollars and said, "Take them into a room."

Did they tell you what happened?

Peter was in shock -- and he is someone who is hard to shock. And Molly was completely red. They wouldn't tell me then what happened, but they told me later at the end of shooting. Molly said the girl went for her, which was good, because she got to be in the male position and to feel what it would be like. Peter never told me everything that happened.

Did you get embarrassed?

Somewhat, but I've been to the Mitchell Brothers before. I took Paul Theroux there for some research for "Chinese Box" in about 1996 or '97. His travel stuff sometimes deals with prostitution. Something about his personality made all the women be drawn to him. He just has a way.

Maybe because he's a journalist, and he's really interested in them?

Maybe that's it. But his son Louis is the same. Have you seen his show on MTV? All the girls were just drawn to him.

What do these young men in the Internet world think about sex and love?

I don't know if they know what love is. They have a lot of fantasies, about playmates and pets. They think of themselves as Masters of the Universe. They won't tell you directly but there's a quote that a lot of them have on their computers -- it's translated from Kafka and says something like "The world is at my fingertips and I can call it up any time I want."

The playmate fantasy is that they can control everything. It's very immature and very much on a fantasy level. There is a level at which everything is superficial. But hey, they're young. I am the first to say I'd probably be the same if I were their age now. I get into my remote control and my TV and I escape the world when I make my films.

Do they know that they are like this? Is there any self-awareness?

Some do. Some are trying. Peter's character is trying to find something he knows he lacks. It's heartbreaking for me when Molly's character says to him in the film, "Did you think I was in love with you?" and he says, "Yes."

Does he know that she is acting, that it isn't real?

Do you see this film as optimistic, in that the guys learn something?

The end of the film is pretty dark. And in a way it has become a period piece in just the year it took to get it out. Look at even Yahoo -- it's not what it was. The dot-com thing was like this really big wet dream. Everyone is hoping it will come again. On a sexual level, it's about fantasizing about a woman and what can happen when things don't turn out.

Is this dot-com alienation really different from the kind that young men have felt throughout history as they grew up?

But it's not active sex -- they aren't jerking off in public, are they?

No, it's not active sex. It's a tease. It's going to be difficult for these guys to have a real relationship. It's easy to fall in love with a stripper; they are all very good. It's like a video game you can touch.

In your research for the film did you see any good sex sites?

Are you serious? Would you do sex films?

I think that truly interactive, tasteful sex would be interesting, dealing with some real issues: What is a relationship, what is love, what is sex?

So you might want to work with Internet guys who know the technology and you could do the art part?

Who did "The Center of the World" Web site?

Are you releasing "The Center of the World" unrated?

Is there a downside to being unrated?

No. The only one maybe is that some big chains won't play it. You know, the other reason I made this film is that in some ways you are always being told, "You can't do this, you can't do that." The execs tell you, the lawyers tell you, then the ratings board -- especially about sex and language. You have two "shits" and a "fuck" and you get an R!

Really? Is that a joke or is it a real rule?

No, it's real. You can kill 500 people and still maybe get a PG-13 but you have two "shits" and a "fuck" and you get an R. All the way down the line, there are all these things you can't say and I just wanted to say, "Let me out!" I was raised Catholic and Baptist. I went to the Sisters of the Immaculate Conception and then to college with the Jesuits.

So will your next film be big-budget and "safe"?

[Laughs] I don't know. There are a lot of things I'm really interested in first. I optioned Chang-rae Lee's "A Gesture Life," about a guy in World War II involved with a Korean comfort woman, and also David Sedaris' "Me Talk Pretty One Day." I want to do those first.

But the world needs more beautiful, sophisticated sex films. You could fill a need.

[Laughs] Maybe I will!