Tom Green is subtle, like a giant elephant dick. 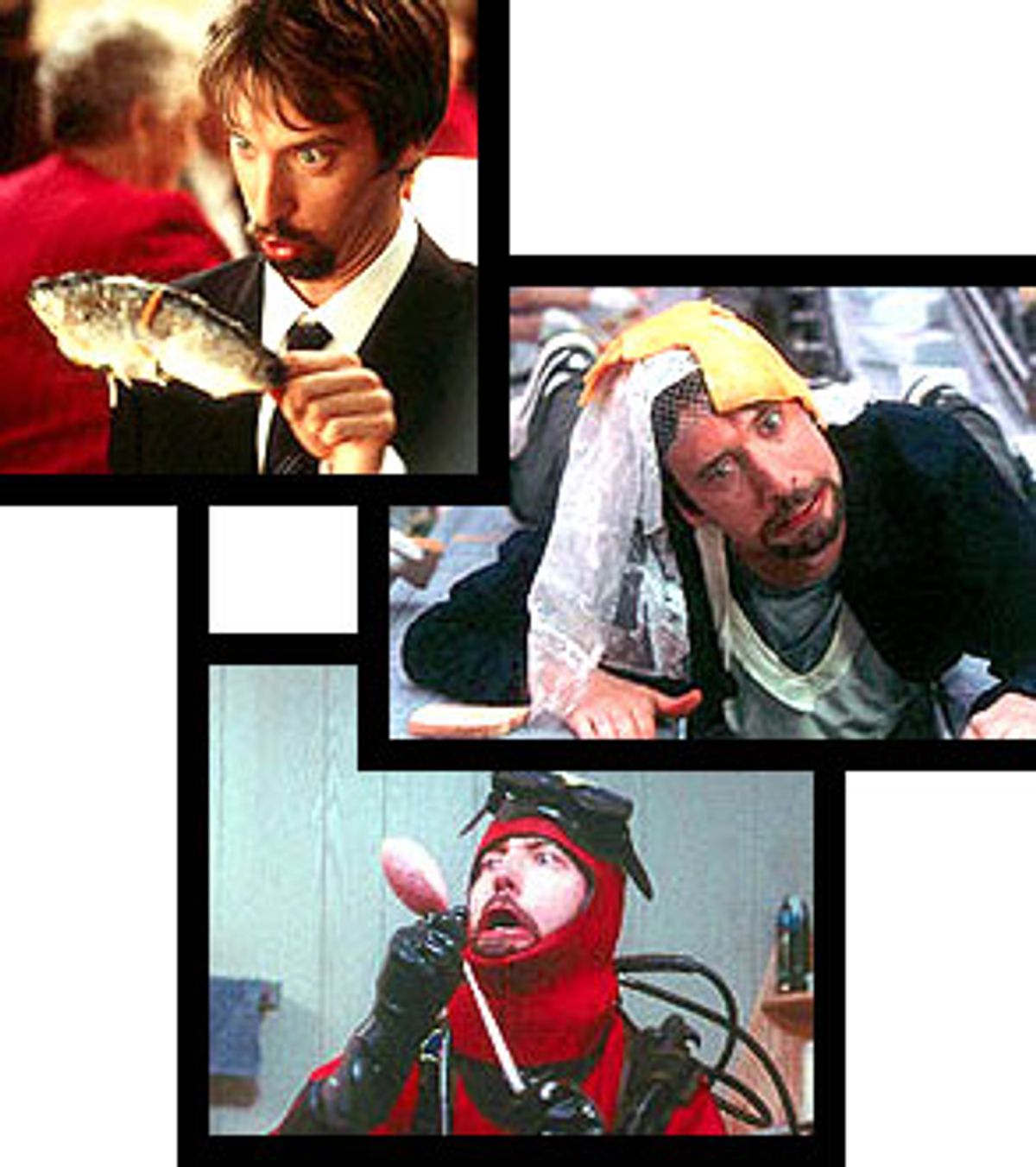 I was just thinking that you don't see many giant elephant schlongs being jacked off in the movies these days. Then, lo and behold, there's Tom Green, tugging on a huge old wrinkled peter in "Freddy Got Fingered." (Thankfully, it wasn't his own.) There was also Tom licking the protruding, bloody bone from a compound fracture. Tom severing a newborn's umbilical cord with his teeth. Tom gutting a stricken deer so he can don the creature's bloody skin, bits of its flesh dangling like fringe.

It's not just that Tom Green's directorial debut (if you can call what Green does here directing) is filled with puerile gross-outs. It's simply that it's so shapeless, so self-consciously out there, that there's no proper context for any of the gags. Each one is designed to make you gasp and say, "It's so sick!" to the point where the reaction becomes rote. There's Green, cavorting on top of a factory conveyor belt crowing to his wrinkled old-lady co-workers, "I'm a sexy boy!" There's Green, wearing luncheon meat on his head. Before long, his childlike surrealism feels as predictable as an '80s sitcom.

The script, written by Green and Derek Harvie, isn't much more than a shaky framework for Green's feeble stream-of-consciousness noodlings, draped and left hanging limply like so many dirty socks. Green, as Gord Brody, leaves his family behind for Hollywood, where he hopes to begin a career as an animation artist. Until his dream becomes real, he has to take a job in a cheese-sandwich factory. Frustrated when he's told by an animation honcho (Anthony Michael Hall) that his drawings aren't much good, he quits his job and returns home to live with his parents (Rip Torn and Julie Hagerty).

Gord meets a nice, wheelchair-bound girl (the sunny Marisa Coughlan), but the friction at home is too much to bear. Gord's father, a scruffy, cantankerous slob, doesn't like having Gord under his roof and doesn't bother to hide it. He's not even particularly nice to his other son, Freddy (Eddie Kaye Thomas of "American Pie"), a good boy who has a decent job and goes out of his way to do everything right.

Before long, Freddy finds himself in a home for abused kids (even though he's full-grown), and Gord's girlfriend has succeeded in developing the first rocket-powered wheelchair. Zany! Meanwhile, Green goes back to the drawing board and creates a TV cartoon show ("Zebras in America," about a family of centaur zebras from Africa -- kooky!) that the cartoon czar really likes and pays him a million dollars for. It's like a 20-car pileup of willful perversity.

Green stumbles through it all with his rubbery timing and underwater-dream-state line delivery, like a dazed accident victim who never knew what hit him. He makes one or two bits work, as when he tries to impress his girl by receiving a call on his "cellular telephone," which is really just the clunky receiver of his parents' kitchen phone.

But with his earnest-looking facial hair and perpetually dopey expression, Green just comes off as one of those weird, fey guys who's a lot less interesting than he thinks he is. It's a performance that screams "Look at me!" louder and bigger than an elephant dick. And every bit as subtle.