You are ruining sex for gay guys with your need for dinner first. 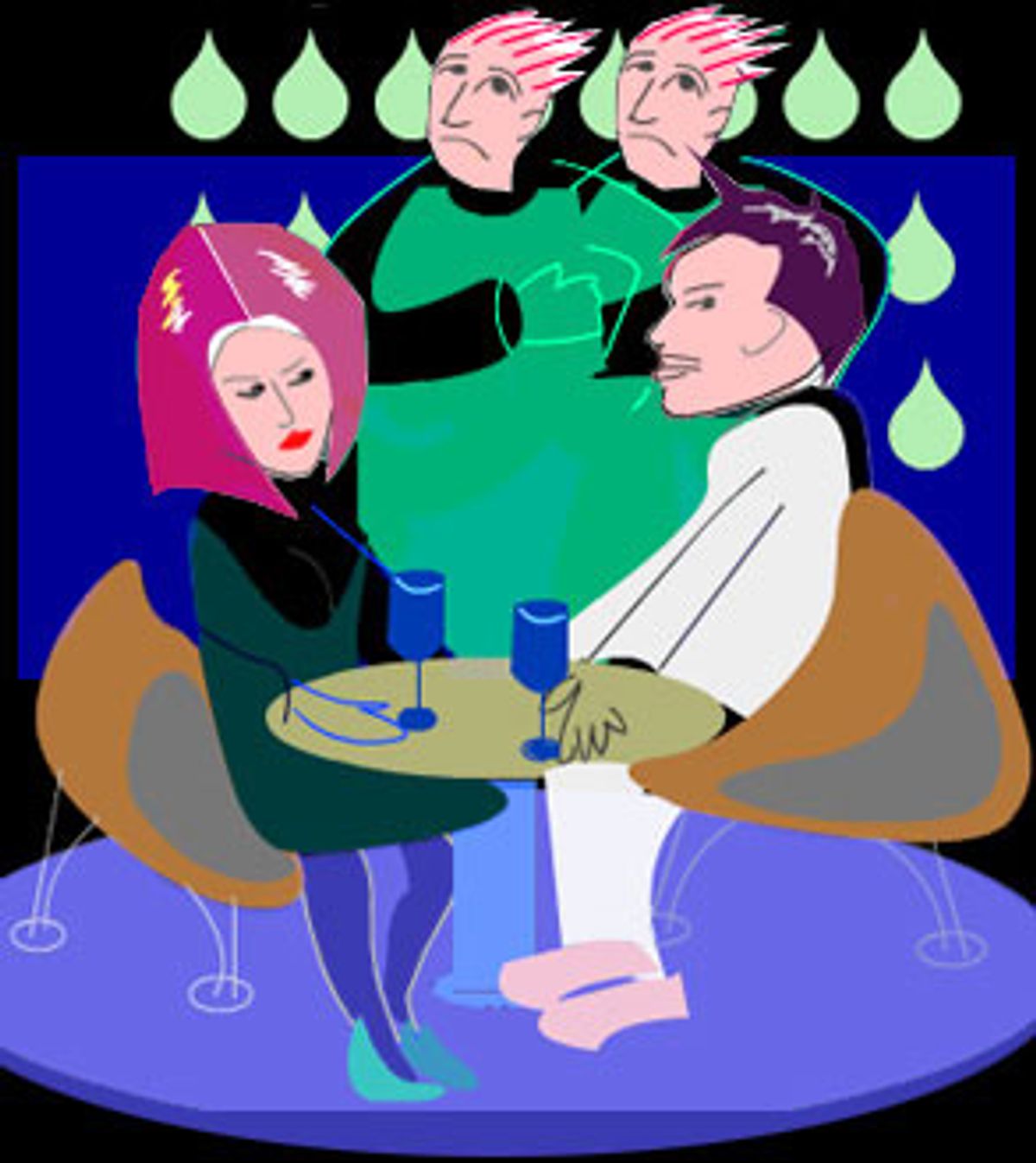 That's why I'm so furious at my girlfriends. As more and more gay guys adopt straight-girl dating strategies (no sex without dating), people like me are getting less and less sex.

I'm from the old school. I believe in sex before dating. The reason is, nothing kills sexual attraction more than having dinner with a guy so dull that even the corn on the cob covers its ears.

Tradionally, women are socialized to "hang on to it," as a girlfriend put it, until they get something valuable in exchange. Men, on the other hand, are socialized to "let go of it." And the exchange rate has nothing to do with it.

Women have what men want, and this sets up a classic seller's market: huge demand and a tight supply. The twist is that the suppliers want to give it away, too, but they can't because the market is regulated by outside forces -- religion, society and empty ring fingers. So even though it's a seller's market, the sellers aren't happy.

Sex between men, however, is the classic example of what happens when supply meets demand: Everybody's happy.

It's more complicated with gals. Last month I experienced what my girlfriends put their men through -- a "forced" date. That's when you're forced to pay for play, meaning dinner. Sound familiar, ladies? See, a straight woman says, "I'm sorry, but I can't have sex with you until I get to know you."

And even when straight women know they want it, they're still liable to say, "I'm sorry, but I can't have sex with you until I order the lobster."

Whatever the reason, it has to stop. I mean, once you complicate a simple transaction, there's no end to the Byzantine complexities you can come up with. Take the idea of accepting dates from guys you're not attracted to. A girlfriend calls this the "courtesy interview." It's like saying, "I have no openings at the moment, but if you want to buy me an expensive dinner, I'll be glad to take a look at your résumé."

Just yesterday I was trying to talk a gay friend out of going out with some guy he wasn't really attracted to just because he asked.

Here's why it's important to have sex before you get to know someone. First, getting to know someone often ruins your physical attraction to the person. Case in point: I went on a date with this hottie. I wanted him like Vanilla Ice wants a comeback.

But he wanted to go out first. Grrr. So we did, and with every sentence that came out of his mouth at dinner, my libidinal compass took another tick south. By the end of the evening, the arm in my compass had broken off. I gave him a goodnight peck on the cheek, rushed out of the car and gave him some bullshit excuse about having to get up early in the morning.

Of course, sometimes you're the dust bag who ruins it for the other guy. Case in point: I went on a date with a guy who, again, refused my attempt at sex until he got to know me. Christ, I thought, another straight woman in the guise of a gay man. Why can't I go out with whores like everyone else?

So I asked him out, acting all proper and everything. As the date progressed, I could sense his compass taking ticks south with every word I said. By the end of the evening I hauled out a gong-size electromagnet in a vain attempt to pull the compass arm north.

I got a goodnight peck on the cheek as he rushed out of the car, giving some bullshit excuse about having to get up early in the morning.

In both cases, whether I dumped or got dumped, I went home without any. How fair is that? My way -- sex before dating -- is better. With the guy I turned out not to like, I could have had hot sex while I liked him and treasured the memory before he ruined it with his insufferable personality.

With the guy who turned out not to like me, we could have had hot sex while he still liked me and he would have treasured the memory before I ruined it with my insufferable personality.

Ladies, if you want to torture straight men with your "No nookie without a cookie" dating strategies, fine. But we don't want you influencing our own time-tested strategies ("Free cookies!"). Our way everybody goes home happy. Your way people go home hungry.