Does the U.S. spy too much?

In the wake of the spy plane flap with China, experts propose international rules of order that would limit excessive espionage. 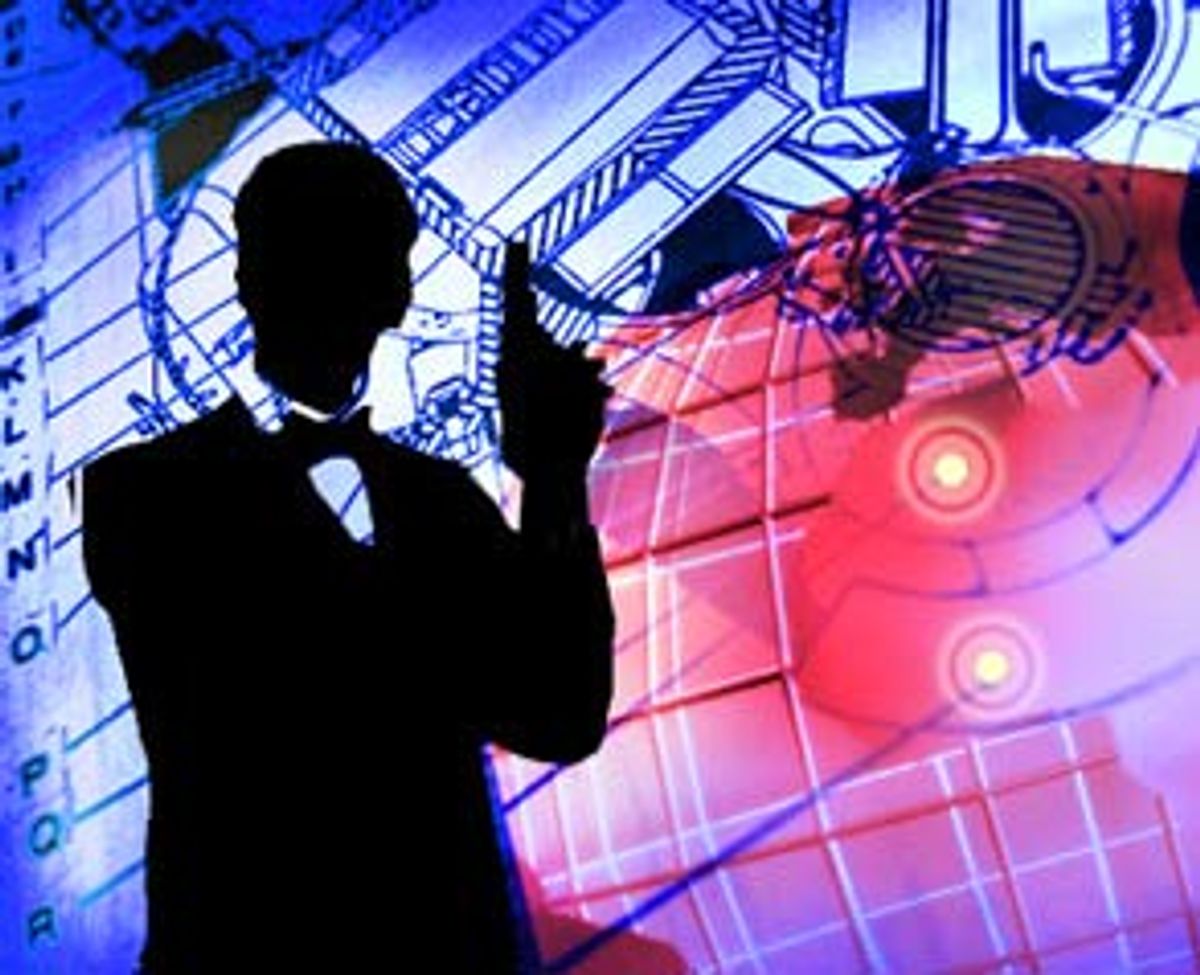 When an American EP-3E spy plane was forced to land on Chinese soil in March, what should have been a routine surveillance operation turned into an international incident. After months of complaints from the Chinese about U.S. reconnaissance flights near their coast, diplomats from both sides were unable to keep the tension from boiling over.

"American planes come to the edge of our country and they don't say 'excuse me,'" President Jiang Zemin exclaimed, even as he expressed hope that the two sides could reach a "common understanding" about the incident that led to the death of Chinese pilot Wang Wei. "This sort of conduct is not acceptable in any country."

In fact, American intelligence has conducted reconnaissance flights for some 50 years, and so have dozens of other countries -- including China, which conducts extensive surveillance all over the Pacific. But the Chinese were miffed that the Clinton administration had ramped up these operations last year in response to mounting tensions over the potential sale of U.S. weapons to Taiwan. (President Bush approved the sale of weapons to Taiwan this week, but he excluded the most contentious weapon from that deal -- an Aegis radar system that had China rattling its sabers.) Chinese officials also complained last May that the flights were coming too close to the coast; the American military responded bluntly that the flights were in international airspace and would continue.

Even in a world where spying is a common reality, it still has the potential to rile neighbors, allies and competitors alike.

As talk heats up that the Bush administration is creating a new Cold War environment in its tough talk with China, Russia and North Korea, even alienating our allies in Europe who are distressed by plans for a national missile defense, some in the field of security are floating ideas that could ease the tensions between the U.S. and the rest of the world while still maintaining our national security interests. The most idealistic of these are proposals for a pact of mutual restraint: Don't spy on us, and we won't spy on you.

Steven Aftergood, who runs the Federation of American Scientists' Project on Government Secrecy recently raised the idea for such an espionage treaty. "Is it possible that espionage could be restricted by international agreement? Remarkably, the answer is yes," Aftergood writes in a recent issue of the organization's newsletter. Aftergood points out that the U.S. already has an agreement with Canada, Australia and the United Kingdom not to engage in espionage against one another.

"There's no need to be utopian about this," Aftergood says in a phone interview. "This is not the solution to all problems. And it does not mean that we can dispense altogether with espionage. But we can do more to build a civilized world and we can eliminate some of the friction that has arisen as a result of espionage, especially among our Western allies."

Such a plan would not be realistic in dealing with sometimes hostile and often secretive countries like Iraq or China. But Aftergood proposes that an agreement could be extended to our other allies in the West -- France and Israel in particular. He even sees it as a possible solution to our tensions with Russia. "It's a particularly interesting case, because Russia has a highly accomplished espionage capability and if they could be made to restrain themselves, it might well be to the U.S. advantage," Aftergood says. Like the arms race, he argues, the spy race can exhaust precious resources.

Even under such an arrangement, not all forms of spying would be ruled out. Satellite reconnaissance, for example, is not disruptive to other governments, and still allows us to verify arms control agreements and monitor environmental degradation -- information that can be useful even to the countries we're spying on. And most other countries are not bothered by overflight reconnaissance, which is a cheaper alternative to satellites. Britain, France, Germany and Israel all maintain top signals intelligence networks that use overflights.

And thanks to new technologies, such flights will rely less on human crews in the future. On Monday, a $20 million spy plane named Global Hawk landed in Australia after its first successful mission -- an unmanned flight over the Atlantic. The U.S. plans to start using the plane for surveillance missions in 2005. (If it were to meet a hot-dogging Chinese jet in the air, it could be crashed into the ocean without the loss of human life, intelligence secrets or the threat of an international incident.)

The kinds of spying we might hold back on, then, fall more along the lines of what is called "HUMINT," or human intelligence gathering -- e.g. bugging phone conversations (which has put off the French), putting spies in the field and recruiting citizens of other countries to gather intelligence for the U.S. "That would mean that we would expect Russia to turn away the next volunteer that approaches them with classified information" -- someone like former FBI counterintelligence specialist Robert Hanssen, for example, who is accused of selling secrets to the Russians for 15 years -- "and we would pledge to do the same," Aftergood says.

Some argue there's a huge upside for the U.S. if we cut down on our espionage efforts. According to one former ambassador, the greatest boon would be the reduction of a bloated, unnecessary bureaucracy -- namely the CIA. The exact amount of the CIA budget is classified, but it is estimated at about $3 billion. That agency is only part of a much larger intelligence network. The last time figures were released in 1998, the total budget for all U.S. government intelligence and intelligence-related activities totaled $26.7 billion.

"There's too much spying going on, and there's too much information flowing into Washington for any policymaker to sift and to absorb," says Robert E. White, president of the Center for International Policy, and former U.S. ambassador to El Salvador under President Carter. "What you really want to do is confine your espionage to places where it's really required," he says.

White says that during his tenure in Latin America, he found that spies working out of U.S. embassies often outnumbered legitimate diplomats. "There are many examples in U.S. foreign policy -- Iran comes to mind -- where U.S. diplomats were following one policy while the CIA was following quite another." Experience has convinced him that too much intelligence runs counter to American interests.

"The purpose of espionage is to gather information -- intelligence is just a fancy word for information -- which will lead to reduction of tensions. The overemphasis, in my view, on espionage by intelligence agencies in the United States is now so great that it has become an issue with allies and adversaries alike." He disagrees with Aftergood that Russia would be a good candidate for such an agreement on spying. "In Russia, I think that the need for espionage has been reduced but not eliminated." But he believes the U.S. could gather all the information it needs in most Latin American countries through diplomats.

White raised the idea of an espionage treaty in 1996 in a Washington Post column. He still thinks it's a compelling idea. "I thought we should start this with democracies and with relatively open societies and Latin American would be a great place to begin. There are really very few secrets in Latin America, they are pretty open societies and diplomats can find out, in my view, all the information, all the intelligence the United States requires to make policy." The same holds true in Western Europe as well.

Nonetheless, it's doubtful the hawkish Bush administration would go for any kind of international espionage treaty.

"I always balk at the notion of signing any agreement that we don't fully intend to uphold," says Jane Wales, president and CEO of the World Affairs Council of Northern California and former senior director of the National Security Council. "You want to make sure with something like this that it is earnest, that it is something that we really believe is in our interest and we intend to abide by, that it's not in any way a kind of public relations ploy."

Wales is quick to point out the many ways that spying can increase world security. Besides sharing data on environmental degradation with both friends and foes, our intelligence can warn friendly governments of impending coups, acts of terrorism and other internal threats before they erupt.

Still, she and others agree that it's a good time to at least think about road rules. "The question is, what are the rules between nations on how you gather that information and how you use it? I think what we ought to be looking at are rules of the road that conform with our own sense of decency and our own sense of right and wrong. "

Some of those are already in place. "For example, it is against U.S. law for the CIA to attempt to assassinate a foreigner -- and it wasn't before the 1970s, as unbelievable as that currently feels," Wales says. Any realistic international agreement, then, would codify restraints that the U.S. already for the most part imposes on itself.