Failing, falling and burning to bits

On its red-hot deathbed, the Mir space station helped us root for misery, a good story and fiery debris. 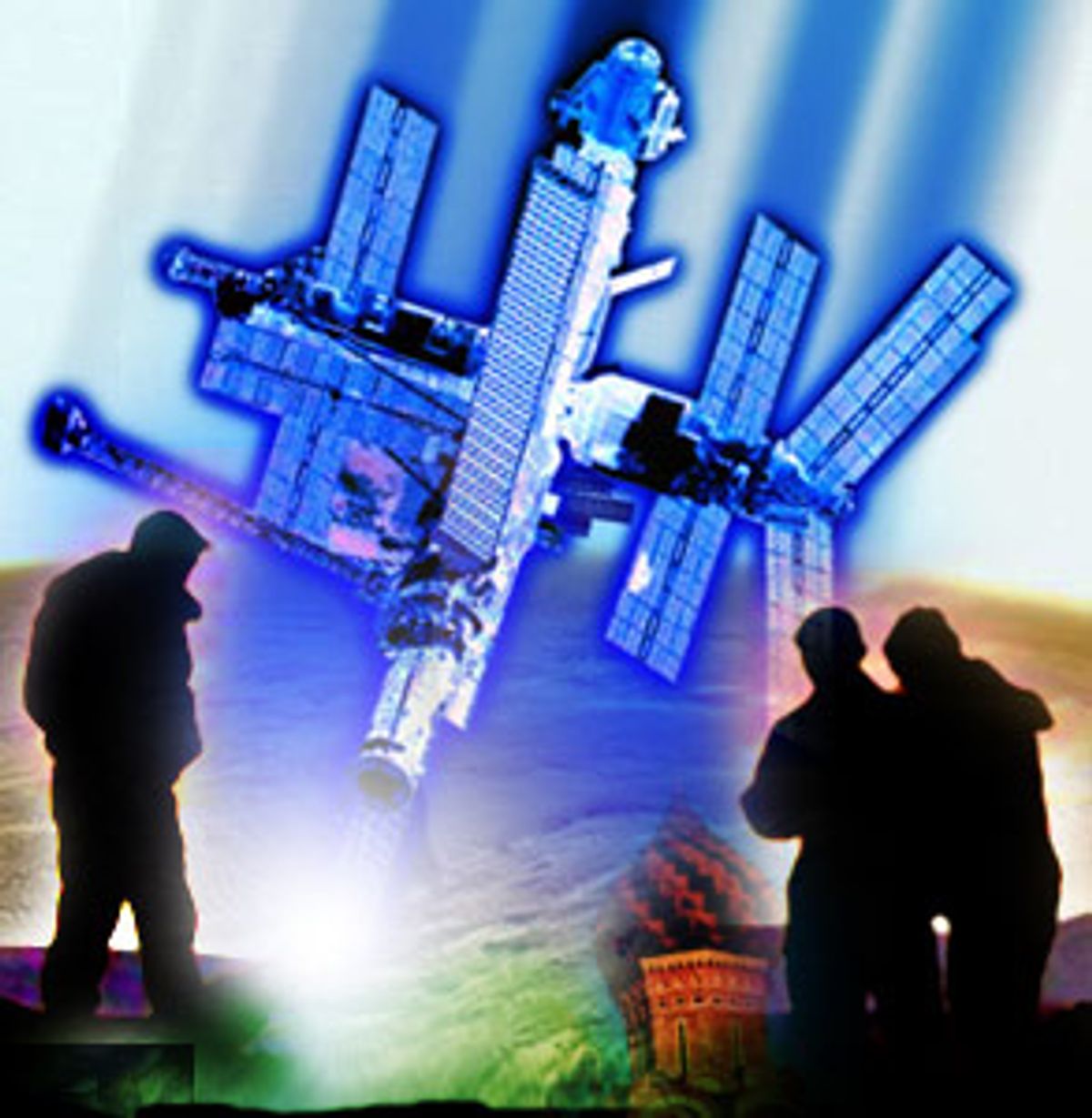 There are many reasons to want a giant space station to fail ferociously, with a burning plunge, and even a dangerous one. We like fire and splashes, but there's more: We worship failure, and we adore falling.

In the weeks before Russia brought its precious Mir into a modestly controlled nose dive into the Pacific last month, people got ironic and giddy. The 143-ton relic was vaguely out of control. With a slew of onboard problems and even more media attention, it had people making indoor plans for the day of its fall.

"The orbit it has carries it over 85 percent of the world's population, over most of the major cities of the world except Moscow," John Logsdon of George Washington University told the Associated Press.

Japan -- the last country Mir would pass over before heading out to sea -- didn't like the sound of the station exploding into an estimated 1,500 fragments upon reentry, which were expected to weigh a total of 27.5 tons. In March, Japan's defense chief canceled a trip to Washington that had been scheduled for the week of Mir's crash.

Before the anxiety, there was just pride: Russia shot Mir into orbit 15 years ago; it outlasted all estimates, and was generally glorious. It looked inspiring and odd, like mating dragonflies or bad public art. It was home to a revolving crew of cosmonauts over the years, and the cosmonauts were a cross between heroes and soap stars back home. Most of all, it worked. Mir circled the Earth 86,325 times. Men and women lived lives up there, albeit cramped ones, and this was to have been a triumphant beginning.

Instead of triumphant sequels, the Soviet Union collapsed. The space plan went into the stack of other plans that weren't immediately kicked to the curb but weren't exactly nurtured, either. By the time everyone had finally adjusted, somewhat, to the new world order, Russia was slashing all projects that weren't paying the bills.

Mir's occupants came home and nobody took their place. Russia let the station float in space while it waited to see what funding would turn up. As recently as last spring, there was talk of making Mir something of a tourist destination for select millionaires. But this, like other schemes, fell apart. What had been the nation's great hope for the final frontier now had people listening for a death rattle.

By the time it was clear Mir would never be revived, it had so many problems that some weren't even sure how to kill it. Guiding it down into the Earth's atmosphere -- it was too big to leave in space, which apparently isn't as roomy as we thought -- required a level of maneuverability Mir apparently lacked. With dying batteries, a central computer prone to shutting down and a huge, unwieldy shape, the station had space officials nervous. And it was starting to attract attention to itself once again: People thought it might land on their head.

Relax, Russia said, though its space agency had taken out a $200 million insurance policy in case Mir did hit anything. It was true that the now-ancient equipment was temperamental, and that ground control would be able to issue commands only when the station was directly overhead -- assuming it responded at all. And it was true that this was the largest man-made object ever to be coaxed home unmanned, and that just bringing it into the atmosphere at the right angle was incredibly tricky, like skipping an uneven stone off a pond. And finally it was true that the guiding engine could die halfway into its burn, sending Mir into Europe, or perhaps anywhere. But Moscow also had 380,000 square miles in the South Pacific to work with. Besides, it had no choice. "We have a direct line with NORAD [the North American Aerospace Defense Command] and U.S. Space Command," said Bruce Baughman of the Federal Emergency Management Agency.

In the event that debris started heading for the United States, FEMA would issue a warning for citizens to take cover. They would have a little under an hour to respond, according to the Associated Press.

"The best thing to do is to keep alert, listen, and if it looks like it's going to hit somewhere, we'll get the warning out to everybody," Baughman said.

The drama was too much. In the months before the station's reentry, people got hooked. Web sites went up to bring us updates, news outlets began covering the story and then it just got campy. Taco Bell floated a 40-by-40-foot vinyl bull's-eye off the coast of Australia; if Mir hit, 281 million Americans would each win a taco. Mir guessing was now about chaos and fun, like a lottery but with a better payoff. Anyone's house, or car, or head, could be a winner.

Those not worried about being hit feared being missed. The average person -- particularly the average Mir nut -- didn't live between Chile and New Zealand, where the space station was supposed to splash down. In the last decadent days of the new economy (the boom itself a hair's breadth away from a Mir-ish fate), a Sausalito, Calif., P.R. firm called Herring Media Group chartered a jet to go watch the space station's reentry up close.

"We'll see a bright, meteorlike object on the horizon with a smoke tail coming toward us, then a series of explosions of the pressurized vessels and a glow as the station fragments into multiple parts and rains down," well-versed company director Marc Herring told reporters.

More than 50 people believed him, and paid about $6,500 each to come along. In the spirit of Mir wackiness, the trip included a few nights on Fiji, a steak barbecue and plenty of drinks on the flight. "People used to kill themselves by jumping from the Brooklyn Bridge," Russian space agency director Yuri Koptev said. "Apparently [those on the chartered jet] are driven by a sense of adventure, but we would recommend that they not go there." It used to be paranoid to say the sky was falling; suddenly it was recreational, and reasonably profitable.

Space exploration has always been accessible -- and thus compelling -- to the earthbound via its exceptionally comprehensible problems, and this was no exception: How do you get a big thing to fall 142 miles in just the right place? We've learned over the years that rocket science is not rocket science -- there's never been a shortage of everyday banal mishaps, the type each of us could understand and invest in because we, too, have confused metric with standard, or bumped the car ahead of us while parking, or forgotten to pee before leaving on the big trip.

Unlike nuclear physics, which couldn't engage us if it tried, space exploration often seems like normal life, only with less gravity. Consequently, we feel up to the task of paying attention: We speculate about astronaut sex, follow the nerdy machismo and, as happened in March, shake our heads when the space shuttle Discovery is forced to change course for fear of colliding with the 10-pound vise someone accidentally dropped into space earlier. So when Mir got old and tetchy, we understood. It was the neighbor's rusty Datsun, sputtering and shabby, and it was finally time for him to push it into the ravine.

Once we had our story line, all interference simply improved the story. When it came out that 30 U.S. fishing boats were camped out alarmingly close to the danger zone in the South Pacific, the fishermen were swallowed by the persistence of the narrative. These dogged, foolish heroes -- would they really risk their lives for a few tuna? The telling was frenzied, and facts were irrelevant at this point. Only later did we learn that the fishermen weren't tempting fate: In fact, their ships were too slow to clear out in time, given the amount of notice they'd gotten.

Details slowed us down; we were excited. We were happy because this was failure, someone else's failure, and there'd be an explosion to boot. We may not be savages, but we do watch "C.O.P.S." -- the fascination with other people's things falling apart has been sufficiently noted in this country, and the absence of human life on the plummeting space station made it the perfect guilt-free spectacle.

Not that there weren't minor obstacles to the pleasure. The potential for destruction was fun to talk about, but it didn't register as real; when Mir spectators began to realize that this was already an actual tragedy for Russia, the party died down briefly.

Give Mir another chance, the speaker of Russia's Parliament, Gennady Seleznyov, begged President Vladimir Putin in the 11th hour. A few former cosmonauts also made emotional requests that the station be spared. To those nostalgic for big, old Soviet projects, Mir had become something of an emblem.

(Some pointed out that Russia's once-great space program hadn't completely vanished -- after all, it would be participating in the exciting new International Space Station, a post-Cold War collaboration necessitated by cuts at NASA as well. But this was little consolation. Russia sensed that the joint effort wouldn't be all that joint, and that its days as a space superpower were over.)

Russia wasn't having fun with the Mir business. The whole thing felt like Faulkner in Moscow, maybe: The decommissioned space station represented all that was stubbornly proud, left over and impotent in the new Russia. When the cosmonauts began publicly pining for their old belongings left on board -- they'd given up by now on the station itself being spared -- it was too much. Before long, the U.S. media went back to its fun countdown, with fewer personal details.

And then it happened. The chartered jet from Sausalito found its front-row seat just in time to see nothing. Mir shot into the Earth's atmosphere, missing the plane, the fishermen, the Taco Bell bull's-eye, Japan, Russia, the United States and all other outposts of humanity. Photographers caught a blurry fireball, and then it was over.

It was unclear what part was success and what part was failure. We had wanted both. We thought what went up must come down, and that what comes down should be jolting now and then. We ratcheted things up, reveled in the ratcheting. What if failure flattens a house, or burns into Tokyo? What if it sinks some fishermen?

And there was history, too: This wasn't just any failure -- it was the collapse of the Soviet Union all over again, only with better visuals. There were pockets of good information. We thought of the cosmonauts' doomed, beloved Mir library: 400 books, the cover ripped from each, years ago, to minimize the station's weight.

Mostly there was gravity. We believe in it. We also resent it, so we demand its even distribution, a mixed gesture of schadenfreude and democracy, piled upward 41 leagues to the airless vestiges of communism.

Success is fine, but take cover if it lasts too long.