Thrilled to hear David Horowitz's pronouncement that "campus censors are on the run," I try a little free speech of my own -- at Bob Jones U. and other conservative schools. 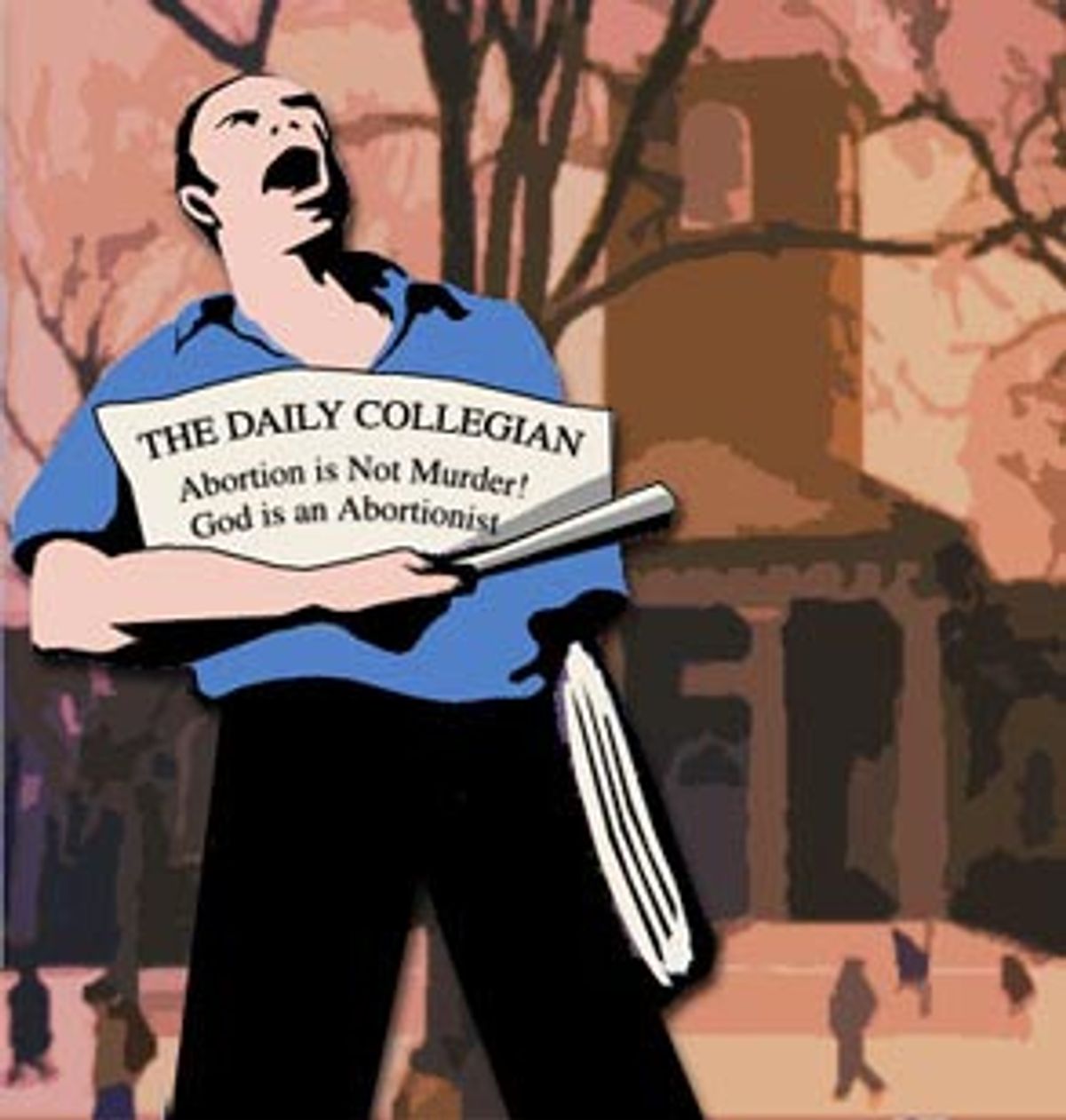 "Three cheers for David Horowitz," I said to myself at the beginning of the Great Reparations Ad Debate. "It's about time conservatives came out squarely in favor of the First Amendment." My joy and admiration grew as the controversy wore on and I saw so much of the conservative punditocracy weigh in as champions of collegiate free speech.

David Orland, writing for Focus on the Family's webzine Boundless, stressed that it is "a fundamental duty of our university system" to foster "free and open debate about matters of national importance." Mona Charen decried "the thick molasses of agitprop that has smothered free speech on America's campuses." Thomas Sowell railed against the censorious pedagogues who were "engaged in a never-ending ideological vendetta against American society and all that it stands for." John Leo reminded us that "being exposed to discomforting ideas is the price of freedom." And Horowitz himself modestly announced that, thanks in no small part to his own heroism, "campus censors are on the run."

Yes, I thought to myself, perhaps times really have changed. Perhaps it really is the liberals who are now the problem, while conservatives have devoted themselves to the unfettered expression and frank discussion of controversial ideas.

A sweet thought, indeed! Something bothered me, however. Horowitz had cleverly and tellingly put liberal college newspapers to the test by provoking the more excitable elements of the campus left. But he had neglected to give conservative campus papers a similar opportunity to prove their free-speech mettle. He had yet to provoke the more volatile minions of the right, say, by ticking off the anti-abortion fanatics.

Surely this was just an oversight. No doubt Horowitz intended to get around to it sooner or later. But he is a busy man these days, what with all that writing and lecturing about how much he is censored.

So I decided I'd save him the trouble and do it myself.

I started by crafting an advertisement designed to challenge one of the cherished orthodoxies of the religious right. Nothing much, really, just an ad proclaiming in bold letters that 1) abortion is not murder and 2) God is an abortionist. The ad supported these claims with what I consider to be irrefutable evidence drawn from the Bible itself.

Next, I e-mailed my ad to newspapers at a dozen conservative campuses, both private and public, religious and secular. Then I sat back and waited, delighted that my ideas would soon be enriching the educational experiences of conservative Christian students at such bastions of free expression as Virginia Military Institute and Bob Jones University.

First to respond was Cassandra Lopez, advertising manager for the Optimist at Abilene Christian University. I eagerly opened her e-mail, but alas, what was this? "I'm sorry," she wrote, "but we are not allowed to publish any advertisements dealing with this nature."

Not allowed? Not allowed by whom? You can imagine my disappointment upon realizing that, despite Horowitz's assurance that campus censors were now on the run, those censors had not quite been run completely off the campus of Abilene Christian.

Certain stipulations. Had Horowitz not convinced me of the depth and sincerity of the conservative aversion to censorship, I might have sensed something evasive, even Orwellian, in those words.

A subsequent message, this one from Bob Jones University campus advertising director John Cofer, translated Forrest's doublespeak into something rather closer to English. "Please understand," Cofer wrote, "that we reserve the right to deny any advertisements that promote issues with which the university would disagree."

But what of the free and open debate about matters of national importance that is the price of freedom?

Next came a phone message from Elaine Pecore of the Champion, the student paper at Jerry Falwell's Liberty University. She breathlessly informed me that my ad was "not really something that we can run in our paper so thanks for your interest and if you have any other ads you can send them to me, but we can't run something like that that doesn't go with our beliefs for the school."

The campus censors may have been on the run, but there I was: a dismal 0-for-4 in my attempts to stir the thick molasses of agitprop and counter the forces engaged in a never-ending ideological vendetta against American society and all that it stands for.

And it wasn't looking to get better any time soon. After a bit of hounding, I got this response from Candy Jones at the Tropolitan of Troy State University in Alabama: "We regret that your ad is not suitable for publication in the Tropolitan." Not suitable! Then came a letter from Melinda Lintinger at the University of Alabama Crimson White, which read as follows: "I did receive your e-mail the other day, however the attached ad copy will not open under our programs, if you could please send it as a jpeg so we can open and all the managers can approve for the ad to run."

It struck me as odd that a college newspaper at a major university would have trouble opening an MS Word file. Nowadays, opening MS Word files would seem to be a fundamental duty of our university system, if only to help us be exposed to the discomforting ideas that are the price of freedom.

The thought crossed my mind that I was being stalled. But who could say for sure? I promptly gave Lintinger the URL of a Web page featuring the ad text, but as the days slipped by without a response I despaired of ever hearing from her again. Just when I had about given up hope -- nearly two weeks later -- she finally wrote to tell me that the Crimson White managers had "decided to reject this ad at this present time." (Perhaps I'll have better luck at some other present time.)

I was now 0-for-6. Where is David Horowitz when you need him?

Other responses trickled in. Six days after my initial request, Colorado Christian University's Cougar Trax regretfully informed me the paper's last issue had just gone to press. Darn! If only they had gotten back to me a day or two sooner! Then I played a round of phone tag with Jeremy Walsh of the Brigham Young University's Daily Universe; at first he sounded interested, but he suddenly stopped returning my calls. Strange behavior for an ad rep, but doubtless he had his reasons for passing up the commission I was dangling in front of him.

Just when I was about to give up all hope of ever tasting the joys of fostering free and open debate about matters of national importance and helping America's college students pay the price of freedom by being exposed to discomforting ideas, Tillman Bowling of Virginia Military Institute told me the Cadet could run the ad as soon as I liked.

Ah, VMI! Here at last was a campus that would not refuse to run the ad, and thereby, in Sowell's words, engage in a "preemptive surrender to mob rule." Here at last was a newspaper that was not engaged in a never-ending ideological vendetta against American society and all that it stands for.

But alas, two days later a second e-mail dashed my hopes. "I am sorry, sir," wrote Bowling, "but my editor has informed me that we are not able to run the ad that you requested." Why not? "I would say that he said this because of the controversial content."

And so it went. I struck out again and again: with Samford and Furman, with Belhaven College and Norwich University. As of press time, only one of the 11 conservative papers I had targeted, the Hillsdale College Collegian, expressed its willingness to run my ad.

Hats off to Hillsdale for being as committed to free speech as UC-Berkeley (whose Daily Californian ran Horowitz's ad, but then printed an apology for doing so).

In an April 2 article in Salon, Horowitz wrote that his own ad had been accepted by 14 of 48 papers. His 29 percent acceptance rate is certainly nothing for the left to cheer about, but it sure beats my own paltry 9 percent.

Things are bound to start looking up, however. Horowitz has vowed to carry on his fight "until American campuses are rendered safe ... for expressing different points of view" and surely this can only mean all American campuses. I look forward to the day, doubtless arriving soon, that Horowitz lays siege to conservative academia.

David Mazel is a teacher, writer, and critic in Alamosa, Colorado. His most recent books include "American Literary Environmentalism" and "A Century of Ecocriticism."