Andie MacDowell and Warren Beatty play perverted games with hand puppets while the rest of the cast romps through this (supposedly) beleaguered farce. 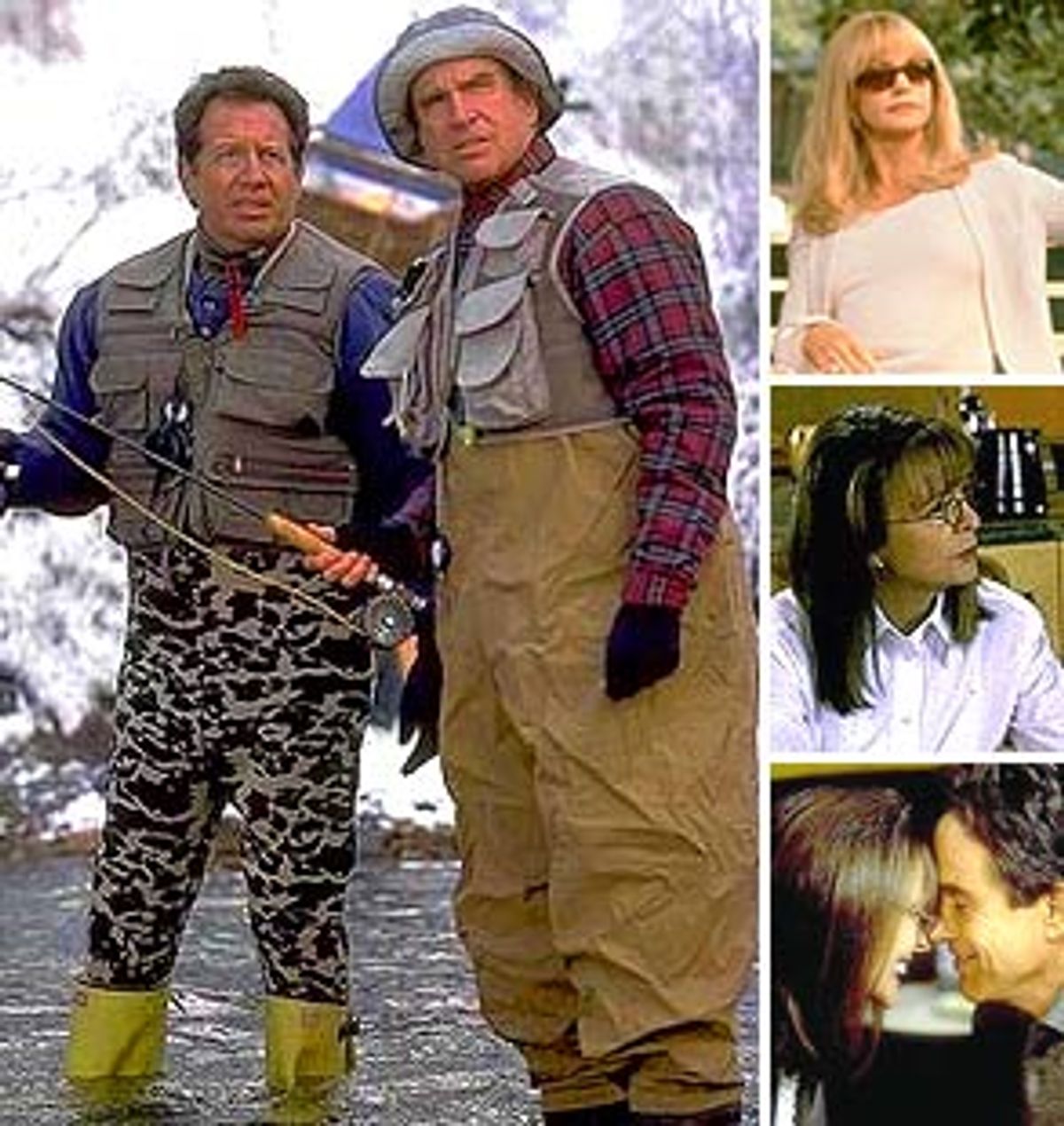 If you're the sort of person who follows insider gossip about Hollywood and the media, my advice is to mend your ways immediately and get a real life: Go hiking, have an affair, read a book about Byzantine art or superstring theory. After all, what good does it do you (or me) to know about the behind-the-scenes squabbles of "Town & Country," the ill-starred adultery farce whose budget ballooned to a reported $120 million after countless reshoots, reedits and other delays?

The film was originally scheduled for release in the fall of 1999, and published accounts have given all sorts of reasons for the delay: Reels of film disappeared from a delivery truck in Manhattan, star Warren Beatty recut the movie at the last moment to insert his own voice-overs and costar Goldie Hawn demanded that certain scenes be reshot to include her twin Lhasa apsos.

OK, so the part about the Lhasa apsos is a big fat lie. But for all I know the rest of that stuff isn't true either, and the version of "Town & Country" I saw this week is the only one we've got -- at least until the collector's edition DVD comes out. In fact, the truth of "Town & Country" is pretty much the same truth of Elaine May's notorious "Ishtar," another Beatty vehicle that arrived in theaters under a black cloud it could never escape: It may be a haphazard mess, but it's actually pretty funny.

Basically, "Town & Country" is a Woody Allen sex comedy minus Woody Allen (not necessarily a bad thing), in which a basketful of affluent New Yorkers start screwing one another and degenerate into outright lunatics. Around the time that a man dressed as a polar bear and a woman dressed as Marilyn Monroe assume the 69 position in an Idaho snowbank -- or maybe around the time Andie MacDowell crawls into bed with Beatty and makes him play perverted games with hand puppets, until Charlton Heston joins them -- I had to throw up my hands in surrender. There isn't much that's original about "Town & Country," and in the age of the Farrelly brothers and their imitators its sex humor is pretty tame, but it has a relaxed yet deranged spirit (thanks, perhaps, to co-writer Buck Henry) that's all its own.

Beatty plays, of all things, a philanderer, but his character, a Manhattan architect named Porter, is hardly the studly hairdresser of "Shampoo." A distracted WASP dad in yachting togs and a Land Rover, Porter has the air of a 50-ish man who has lost his reading glasses and discovered his yen for younger babes at the same moment. Amid the often antic chaos of "Town & Country," Beatty gives a graceful, unshowy performance with a tiny nugget of tragedy at its core. Porter's best friend Griffin (Garry Shandling, in what would be the Woody Allen nebbish role if this were in fact an Allen movie) is also having an affair, and the two are supposed to provide each other manly counsel though neither really knows the other's secrets.

Most of the script (credited to Henry and Michael Laughlin) is standard-issue farce straight out of 17th century French drama, with a few faintly contemporary flourishes tacked to the edges. Never suspecting that the saintly Porter might have a roving eye, his ditzy designer wife, Ellie (Diane Keaton), sends him off to a decaying Mississippi mansion to console Griffin's jilted wife, Mona (Goldie Hawn), with predictable results. A frantic scene in which first Ellie and then Griffin interrupt a heated Porter-Mona beach-house coupling is played with just the right stupid grace, even if the shtick is twice as old as Strom Thurmond. Meanwhile, Porter and Ellie's near-adult kids, Tom (Josh Hartnett) and Alice (Tricia Vessey), are flaunting their own sexuality, having taken up with a girl with a pierced tongue and a swarthy foreign man, respectively. Racy stuff!

The central foursome is enjoyable enough through this material, although the movie mainly belongs to Beatty and the ever-entertaining, weasel-faced Shandling, who's a much subtler and better actor than he's generally given credit for. Keaton and Hawn are more or less along for the ride, and you get the feeling the filmmakers took scurrilous delight in assigning the former such lines as "This is all about you and your big, stupid cock!" and "Do you know what cornholing is?"

Despite my cautionary words at the outset, it's tough to resist the feeling that director Peter Chelsom ("Hear My Song," "The Mighty") lacks control over the characters or the material. "Town & Country" shows the most spunk when it breaks free from its foreordained pattern and begins to free-associate, as the disgraced Porter and Griffin head out to Sun Valley, Idaho -- where Ernest Hemingway shot himself, Porter observes -- to reconnect with their masculinity and confront their future.

This episode, the movie's minivacation from itself before a too-tidy denouement kicks in, is when Porter encounters the nymphomaniacal Eugenie (MacDowell), along with her über-competitive Great White Hunter dad (Heston) and foulmouthed wheelchair-bound mom (Marian Seldes). It's also when Porter, in a bear costume, ends up doing the mambo with a hardware store clerk dressed as Marilyn (Jenna Elfman) while Griffin, clad in white leather and shades and performing kung-fu kicks, gets asked, "Are you Elvis or Evel Knievel?" It's all blissfully meaningless and irresponsible, but I laughed myself sick and never once thought about who got paid what on the front end or what mean things one snarky Los Angeles person in bad, expensive clothes said to a reporter about another one. Praise the Lord.