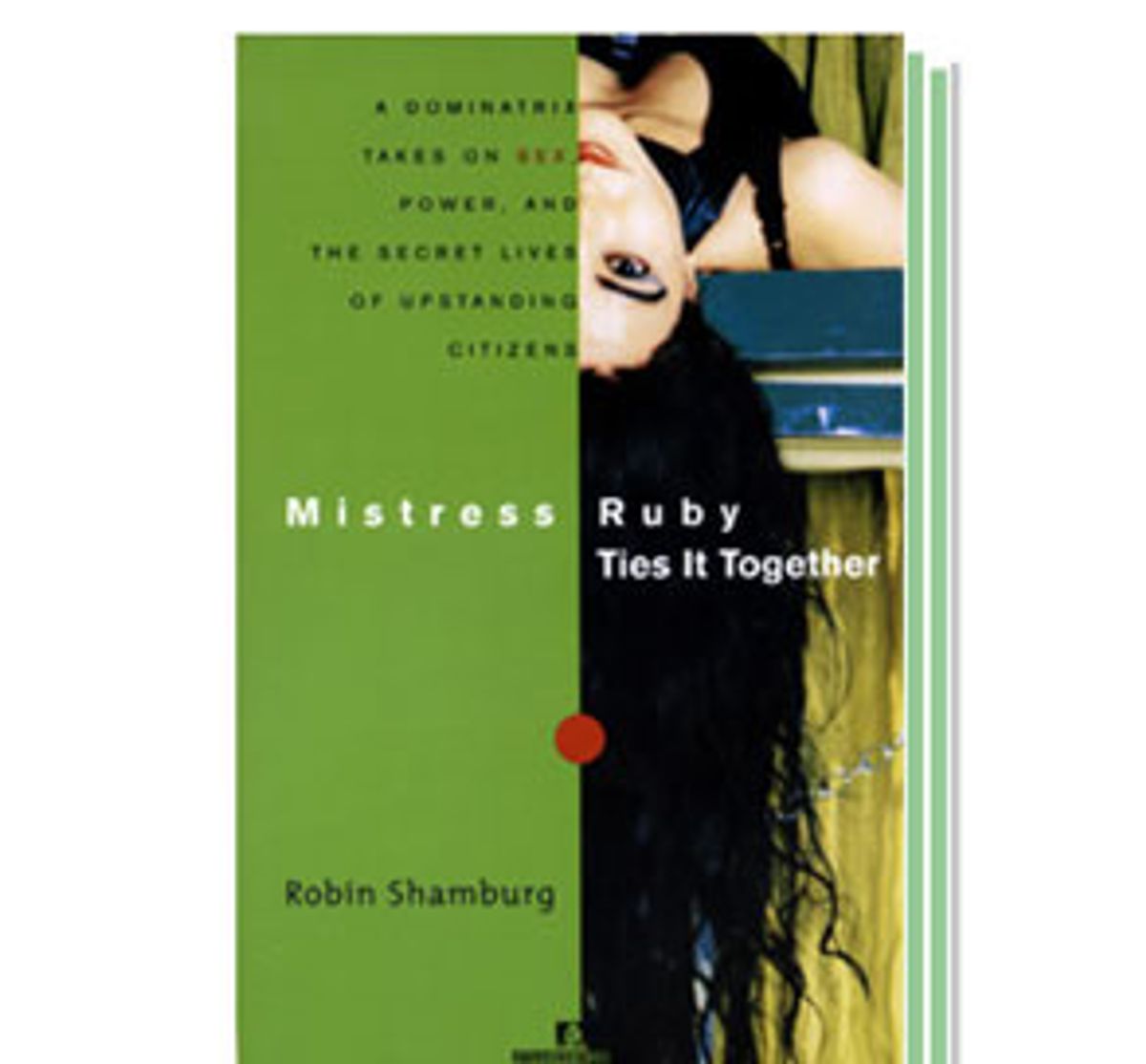 In every bar in every town across this great nation, there is a woman who will dance with you, and with abandon. Her hair has got that tousled morning-after quality to it, dark of root and frosted at the tips, and if you can't picture pulling on it, just you wait a few more beers.

Her walk is loose, as if her joint sockets have been recently greased, her lipstick looks as if it wants to be on someone else's body. When she stands, it's too close. She does not so much sit as straddle. Her panties, if she has them, can often be found in a ball at the bottom of her purse, stuck to her Binaca blaster. And she's got at least one tattoo -- or stretch mark, depending on age -- on a part of her body that you've got every chance of unearthing before the sun rises over the parking lot.

This woman is a slut. Trampus americanus.

I know this woman because week in, week out, I field half a dozen requests to make men -- grown men! upstanding men! -- over in her image. Indeed if worse came to worst, I could probably float my entire dungeon career on the basis of this fantasy alone. The scourge of most women, the secret darling of men, you will find that wherever people are hung up on their own sexual impulses, the cult of the slut is alive and well and giving out blow jobs in the backrooms and dungeons of Anytown, USA, the hang-up capital of the universe.

But before we go any further, let's define our terms. I'm not talking about prostitutes here -- women, and men, who will suck and fuck for money -- though it's true that a certain hard-core slut faction is not averse to leasing out the pussy if it means getting a warm place to sleep from time to time. But we'll get to that later. For now, suffice it to say that if your workplace is called "the track" and there are no horses around, you, my dear, are a prostitute.

My Webster's defines slut as 1) a slovenly, dirty woman; a slattern, 2) a woman of loose morals, 3) a prostitute. In Webster's view, the word itself is a judgment. Slut is a slur.

But I think that if we were to be totally honest with ourselves, the word slut, in everyday parlance, carries more than just a whiff of jealousy. A so-called nice girl is quick to deem another woman a slut if that other woman is diverting her man's sexual attention away from her. To the nice girl, the slut is playing fast and loose -- two words commonly associated with sluthood, of course -- with her own sexual power, something the nice girl has been taught never to do.

Secretly, however, the nice girl suspects that while the slut may or may not be winning the mating game, she's definitely beating the pants off her in the side race -- because the slut is having way more fun on the trot.

But for men, I think the story is a bit more basic. While the word still contains the insult, that insult is tempered with resentment. To your average Joe, a slut is a woman who, though suspected of being sexually active, will not give him the time of day (see also bitch and lesbian). At least, that's the public face of it -- it's not so much a word as it is an epithet, one that is spat and hissed and hurled from construction sites and muscle cars of frustrated dickheads, commonly underscored with an obscene hand gesture.

Privately, however, it is my observation that most men would like their women to behave like shameless trollops, wanton and loose. But only under the most carefully controlled conditions: that is, for him and only him. And you'd better just cut it out when he begins to fear that he won't be able to keep up with you. In this case, the private-dancer slut is about as owned by her man as the nice girl is by sexual mores and her mother. My advice to these women: put your pussy in an envelope and mail it to its new owner. Advice to these men? Don't let the beast out of the bag if you can't handle the consequences.

A different Webster's -- the unabridged version, naturally -- allows a fourth definition of slut: a bold, brazen girl. I can back that one. In my mind, there are two kinds of slut. The first is a woman who, due to a host of self-image difficulties, possible paternal neglect and abuse, the subsequent slew of shitty boyfriends, and a modicum of spite, develops a pathological need to fuck or appear to fuck as many guys as possible. Sex becomes the only way she knows how to get attention.

Stay as far away from this creature as possible. The only way you can fix things is to make her problem your problem, and never you mind the sad and desperate origins that made her this way. The sob story that caused her not to care about herself is the same one that will land your ass in a VD clinic. Or worse.

The second kind of slut, simply put, is a woman who takes her pleasure as a man does. That means to fuck as is her wont and without guilt or remorse; when the sun comes up, her body is still her own. These women wield a profound power because they are in full possession of their own sexuality.

And they do us all a great service by weeding out the weak: the man who fears her is probably not worth your time. These women are the sex warriors, the independent owner-operators who bring great honor to our gender. They always carry their own protection, and you don't necessarily have to marry them afterward -- though you may find yourself wanting to.

But let's bring this back to the dungeon. By far the best thing about S&M play is that it's a means of exploring gender roles and boundaries in ways that are often not appropriate in everyday life. So never mind what I've been up to all weekend; as your mistress, I am the antislut, the woman you can never, ever have -- no matter how I act, no matter what I do. And this, in turn, frees my client up to be the person he has always admired, reviled, resented, and desired from afar: the unrepentant slut.

But why is it, exactly, that so many client fantasies require treating them as wanton women? I know you smell a theory coming, and I won't disappoint. The fact is, I've rarely seen a cross-dresser who wanted me to dress him up from wig to garters to heels and then regard him as my respected equal, a Mother Teresa meets the Queen Mother. Unless, of course, the Queen Mother is secretly blowing the royal chauffeur and Mother T. is doing something that, if I mentioned it, would cause God to smite me where I sit.

But that's an easy theory when we're talking cross-dressers; indeed, the sartorial limitations of most dungeon CD closets would turn most any man into a street-hardened tart, those being the clothes we have handy. Let's look at the noncostume dramas -- the bondage, discipline, corporal, or spanking sessions -- in which a client wants to pretend that his sexuality has a value that he is willing to surrender to me, for free in the name of a minute's pleasure, or attention. In short, a slut.

I think we already have our answer here. Like it or not, in this world a woman's sexuality -- her pussy, to be blunt -- trades for a higher price than does a man's sexuality. Somewhere along the line, it was established that women hold the sacred box; men want the sacred box. For the love of the box, women can get men to do things -- like work a fifty-hour week, take us to fancy dinners, and pretend to be interested in our feelings. In much the same fucked-up vein, the perceived value of this box, and the challenge of attaining it, creates an increased sexual desire in the male of the species -- a greater horniness if you will.

So you take a man and treat him like a loose woman, and there you get the best of both worlds: a man's libido coupled with a woman's easy access to sex. But this only really works as a session if you take the chauvinistic view I've outlined above. Because, sure, the guy will go out and work that fifty-hour week for the pussy that stays at home, but then again, that pussy's got to stay at home. And in that view, the mind-set that keeps the box a precious commodity is the same mind-set that keeps a woman in her place.

That's why sluts are such an asset -- necessity, even -- to a free-thinking, egalitarian society. The true slut -- that is, the sexually mercenary woman -- trades her pussy for whatever price she desires, and leaves the backroom morality brokers to sit on their hands in frustration. In doing so, she throws a real monkey wrench into the marketplace and says a big fat fuck-you to the evil forces that allow it to exist.

If that's the case, all women should be sluts. But first we've got to reclaim the title so that it reflects the pride we feel to be honored as such. Lenny Bruce once suggested that schoolchildren say nigger fifty times after reciting the Pledge of Allegiance. This, he felt, was the only way to destigmatize someone else's ugly epithet. We sluts would do well to follow his example.

Robin Shamburg is the author of "Mistress Ruby Ties It Together."